‘I Have Nothing To Be Ashamed Of’: Highlights from The American Civil War Collection, 1860-1922 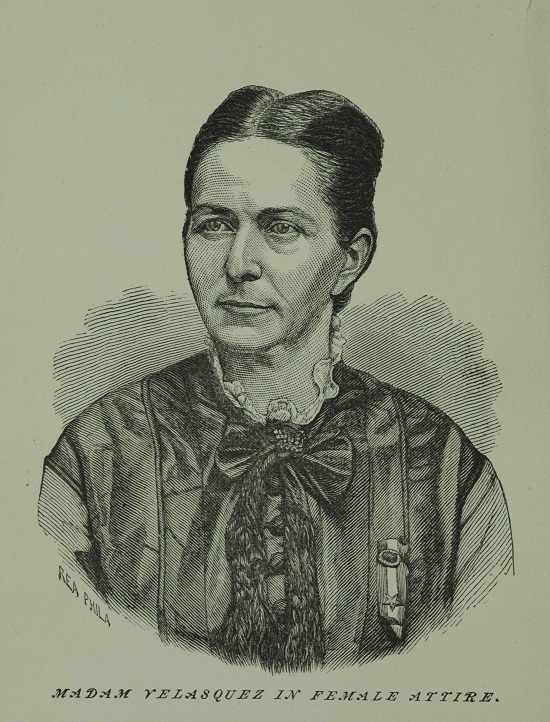 Personal narratives digitized for the September release of The American Civil War Collection, 1860-1922, include a compelling example of mendicant literature by a disabled veteran, the Confederate Army adventures of a male impersonator, and the sensitive reminiscences of a Union captain. 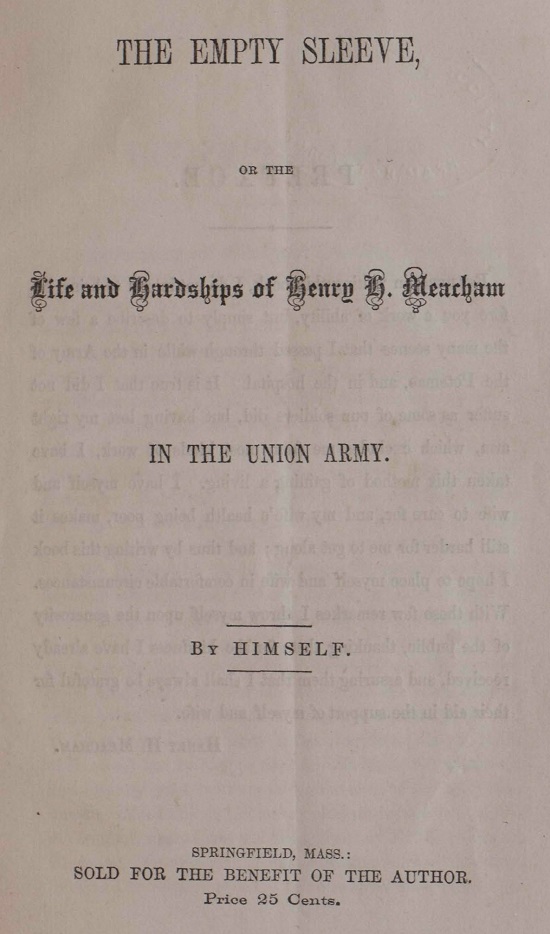 The Empty Sleeve, or the Life and Hardships of Henry H. Meacham in the Union Army. By Himself (1865)

At the breaking out of the great Rebellion, I was engaged at carriage-making in the Town of Russell, in Massachusetts, but thought it my duty to enter the service in defense of my country and do what little I could to keep traitors from trampling the good old flag under their feet.

Henry Meacham, twice rejected for poor health, was finally accepted and “placed in Company E, Thirty-Second Regiment, Massachusetts Volunteers, who were at that time lying at Culpeper, Virginia.” He finds quickly that military life is more difficult than he had imagined; marching for twenty-three hours in a day, experiencing the Battle of Rappahannock Station, and lacking adequate rations. Of the last he writes:

As the sun was setting in the west we arrived at Bealton Station, and were gladdened by the sight of teams with our rations. Here we halted and got ten pieces of hard bread and a small piece of pork. Many poor men ate the whole at once, but in these cases it made them sick, as they did not stop to pick out the worms, for the bread was very wormy; but we must eat it or have none.

Meacham survives numerous battles in the spring and early summer of 1864 and describes their cumulative effects.

Fatigue, hardships and sickness had worn me down, but I would not ask to go to the hospital, for I would rather be with the Company as long as possible. I think this was the 18th of June 1864. We did not move out of range of the enemy’s fire, and there was a good many wounded without being able to do anything to prevent the fire. I was hit four times during the day with spent balls.

As we were standing there, a shell came through one man and then exploded, taking my right arm off, and killing four of my comrades, making five lives destroyed and one wounded. I never expected to get home or even off the field, but I was bound to do all I could. When the shell hit me, it took part of my arm off, and I never saw the hand afterward. I was at this time one mile from any surgical assistance, and walked that distance, while the blood was fast leaving me, notwithstanding I had bandaged the arm as tight as possible. Only by the assistance of kind friends did I reach the ambulance. The surgeon examined my arm, and could then do nothing more than cord it again, and give me morphine....I was taken to the amputating room and placed on the table. This is the last that I remember until my arm was amputated. After I had fully come to my senses, I was conducted back to my bed on the ground, and there I remained during the night with my bloody clothes on. 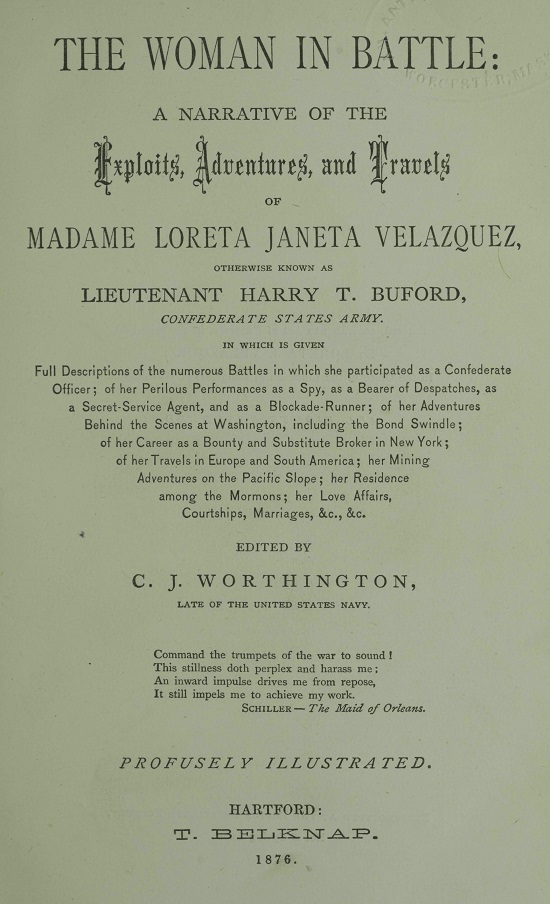 I do not know what the good people who will read this book will think of me. My career has differed materially from that of most women; and some things that I have done have shocked persons for whom I have every respect, however much my ideas of propriety may differ from theirs. I can only say, however, that in my opinion there was nothing essentially improper in my putting on the uniform of a Confederate officers for the purpose of taking an active part in the war; and, as when on the field of battle, in camp, and during long and toilsome marches, I endeavored, not without success, to display a courage and fortitude not inferior to the most courageous of the men around me, and as I never did aught to disgrace the uniform I wore, but, on the contrary, won the hearty commendation of my comrades, I feel that I have nothing to be ashamed of. 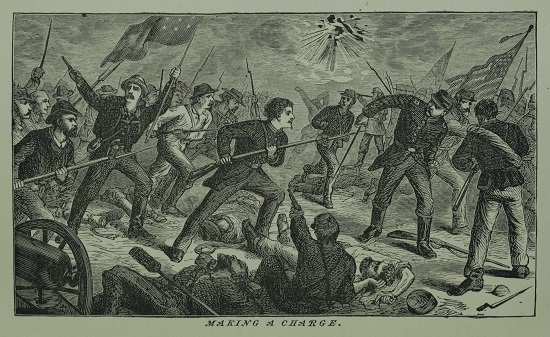 Loreta Janeta Velazquez (1842-1923) twice enlisted in, and fought battles for, the Confederate States Army and was twice discharged when her gender was discovered. Velazquez would go on to spy for the Confederacy and also report to the U.S. Secret Service as a double agent. The Woman in Battle is a:

…narrative of the exploits, adventures, and travels of Madame Loreta Janeta Velazquez, otherwise known as Lieutenant Harry T. Buford, Confederate States Army. In which is given full descriptions of the numerous battles in which she participated as a Confederate officer; of her perilous performances as a spy, as a bearer of dispatches, as a secret-service agent, and as a blockade-runner; of her adventures behind the scenes at Washington, including the bond swindle; of her career as a bounty and substitute broker in New York; of her travels in Europe and South America; her mining adventures on the Pacific slope; her residence among the Mormons; her love affairs, courtships, marriages, etc., etc. 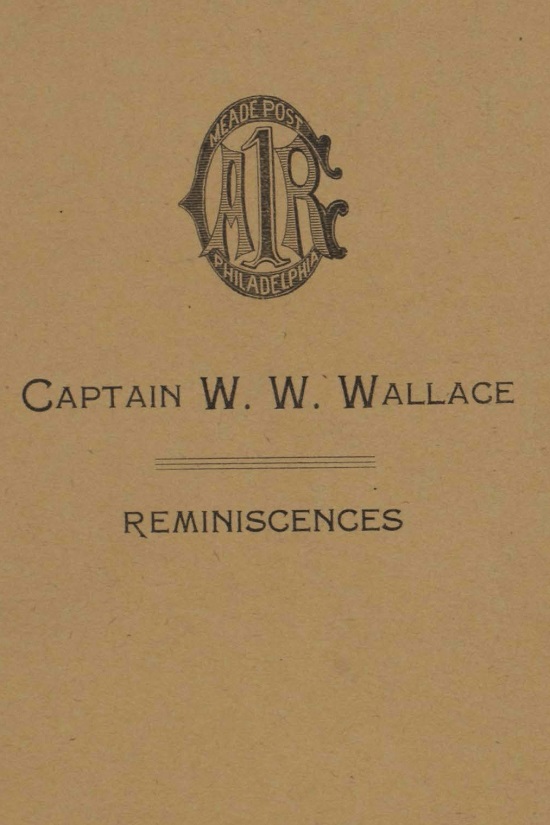 How came I, a Presbyterian church member, a Sabbath-school teacher expounding the Gospel of Peace, and the offspring of an Orthodox Quaker grandmother, to go to war? Well, thereby hangs this tale: When I was about ten years of age, I saw two “slave catchers” brutally treating an unarmed and defenseless negro, and that inhuman spectacle filled me with an abiding antipathy to the institution of slavery, which, to my mind, those two brutal men represented. Abut twenty years after that incident, when Abraham Lincoln, for whom I had voted, called for volunteers to preserve the Union. I felt that it was an appeal that no loyal citizen could disregard. 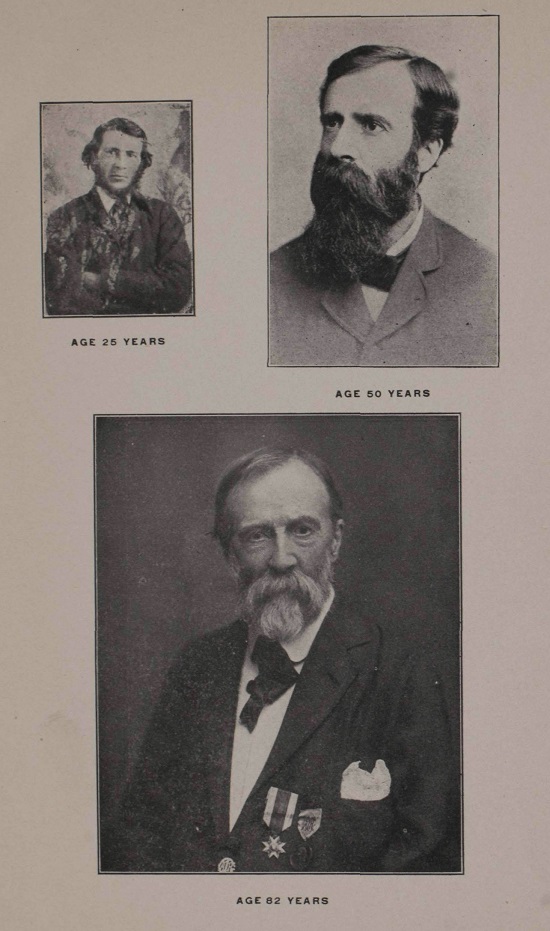 William Wigton Wallace mustered as Captain of Company C of the 125th Pennsylvania Infantry in 1862 at the age of 20. His narrative begins with tales of chasing frogs as a boy but soon turns to more serious matters. Describing his role in a skirmish in the days leading up to the Battle of Gettysburg, Wallace writes:

I immediately waved the boys into ambush, and we were all snugly concealed as the lieutenant shouted in passing: “They are coming, Captain, and a lot of them” (in his excitement he used a phrase more forcible than polite). Sure enough, his little band had scarcely passed when a squadron of Confederate cavalry came swiftly into view in hot pursuit, shooting and shouting: “Halt! Halt, you Yankees.”….Our obligations to our cavalry escort, in peril of capture, outweighed all prudential considerations, and when the enemy got abreast, out of twenty-seven yards of brushwood we gave them a rattling volley, which effectually halted them and sent them back at full speed in great disorder. Four shots from my navy revolver were sent after them as parting salutations to accelerate their flight.

For more information about The American Civil War Collection, including pricing for your institution, please contact Readex Marketing.