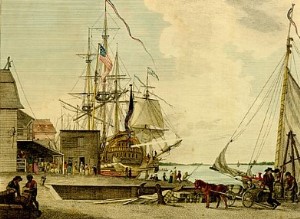 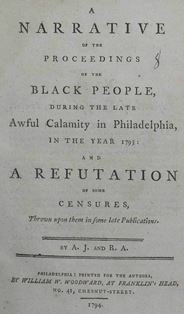 Early in September, a solicitation appeared in the public papers, to the people of colour to come forward and assist the distressed, perishing, and neglected sick; with a kind of assurance, that people of our colour were not liable to take the infection….We visited upwards of twenty families that day—they were scenes of woe indeed! The Lord was pleased to strengthen us, and remove all fear from us, and disposed our hearts to be as useful as possible.

Answering claims of African American profiteering during the emergency, the authors submit:

Our services were the production of real sensibility;—we sought no fee nor reward, until the increase of the disorder rendered our labour so arduous that we were not adequate to the service we had assumed. The mortality increasing rapidly, obliged us to call in the assistance of five hired men, in the awful discharge of interring the dead. They, with great reluctance, were prevailed upon to join us. It was very uncommon, at this time, to find any one that would go near, much more, handle, a sick or dead person.

We feel ourselves sensibly aggrieved by the censorious epithets of many, who did not render the least assistance in the time of necessity, yet are liberal of their censure of us, for the prices paid for our services, when no one knew how to make a proposal to any one they wanted to assist them. At first we made no charge, but left it to those we served in removing their dead, to give what they thought fit—we set no price, until the reward was fixed by those we had served. After paying the people we had to assist us, our compensation is much less than many will believe.

That there were some few black people guilty of plundering the distressed, we acknowledge; but in that they only are pointed out, and made mention of, we esteem partial and injurious; we know as many whites who were guilty of it; but this is looked over, while the blacks are held up to censure.—Is it a greater crime for a black to pilfer, than for a white to privateer?

We wish not to offend, but when an unprovoked attempt is made, to make us blacker than we are, it becomes less necessary to be over cautious on that account; therefore we shall take the liberty to tell of the conduct of some of the whites.

Phillis Wheatley (c. 1753-1784) was the first published African American female poet. She was born in West Africa, sold into slavery, and transported to America aboard a slave ship named The Phillis. She arrived in Boston in 1761 and was purchased by the Wheatley family who taught her to read and write.

In a prefatory note, Wheatley writes: 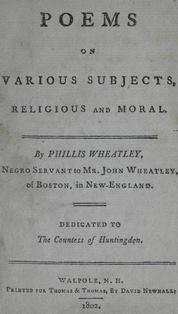 The following poems were written originally for the amusement of the Author, as they were the products of her leisure moments. She had no intention ever to have published them; nor would they now have made their appearance, but at the importunity of many of her best and most generous friends; to whom she considers herself, as under the greatest obligations.

As her attempts in poetry are now sent into the world, it is hoped the critic will not severely censure their defects; and we presume they will have too much merit to be cast aside with contempt, as worthless and rifling effusions.

The following is an extract from her poem titled, Imagination:

Imagination! Who can sing thy force?

Or who describe the swiftness of thy course?

Soaring through air to find the bright abode,

We on thy pinions can surpass the wind,

And leave the rolling universe behind:

From star to star the mental optics rove,

Measure the skies, and range the realms above.

There in one view we grasp the mighty whole, 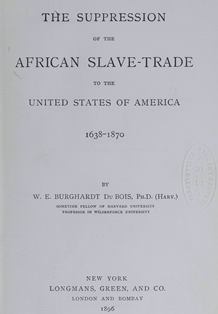 W.E.B. Du Bois was a highly influential sociologist, historian, civil rights activist, and author. In his first published scholarly work, which was released as the inaugural volume in the Harvard Historical Studies series, Du Bois writes of a paradoxical dynamic many countries have faced:

There is always a certain glamour about the idea of a nation rising up to crush an evil simply because it is wrong. Unfortunately, this can seldom be realized in real life; for the very existence of the evil usually argues a moral weakness in the very place where extraordinary moral strength is called for.