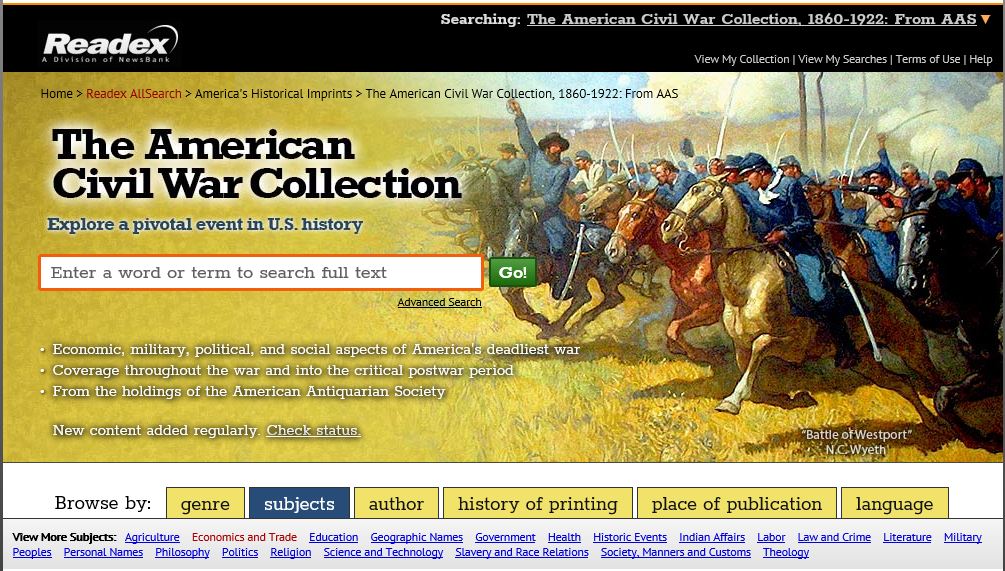 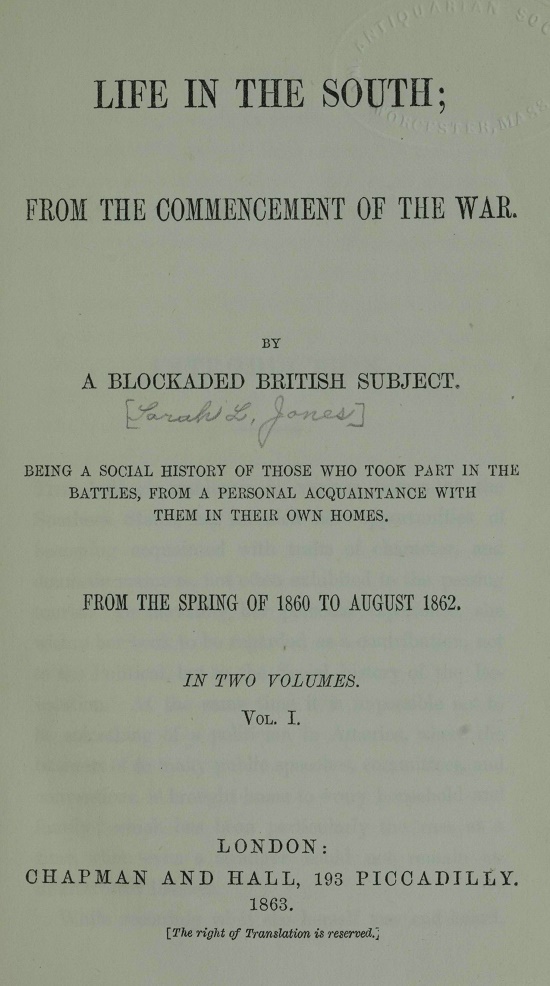 Later she recounts a conversation about slavery and the treatment of slaves.

…I asked Mr. Harvey if the negroes were really more severely treated further south than they were in Virginia. He replied “In some particular localities, where they are left to overseers they are, but there are laws for the protection of slaves, and when the master is aware of it, it is not permitted to ill treat them.” This gentleman told me that since he had given up his plantation and come to reside in town, he had hired out his servants by the year, at the end of which period, they were at liberty to return to him if they were not happy and well treated by those to whom they were hired. He said some negroes require to be broken in like dogs and horses, in order to establish a power over them, and keep them in subjection. One of his most faithful and attached slaves had been subdued in this way. 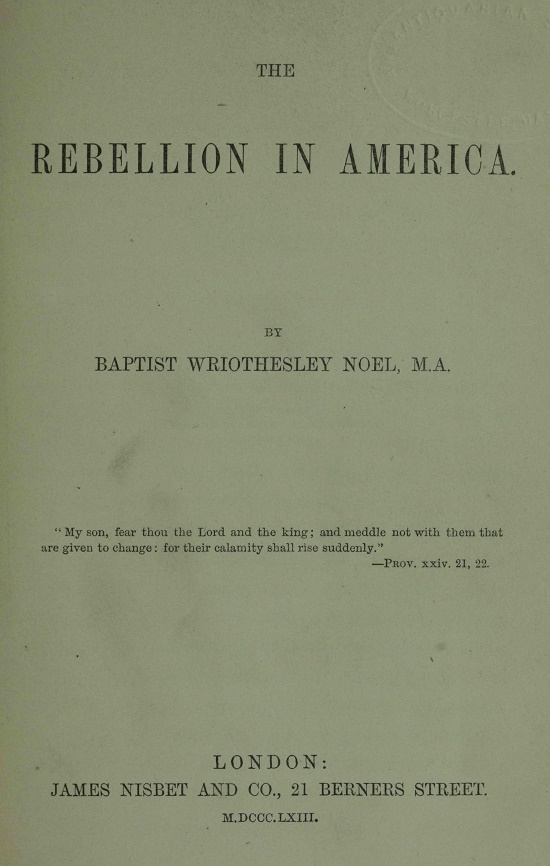 Baptist Wriothesley Noel (1798-1873) was an English evangelical clergyman. He too wrote about American slavery but viewed it differently than did Hopley. In a chapter titled “Emancipation,” Noel includes a section titled “The Relations of the Slave to his Master” in which he writes:

In the Slave States, a man comes, or may come, into the possession of another man by sale, as a horse or dog. The buyer, after feeling his muscles, examining his skin, inspecting his teeth, and making him run, gives so many dollars for him to the seller, and takes him home as he would a dog. In a similar manner the slaveholder buys women and children. Men and women thus bought by him become his property. The law says, “Slaves shall be deemed, taken, reputed, and adjudged in law to be chattels personal to all intents, constructions, and purposes whatsoever.”

“In this light it is plain that the dominion of the master is as unlimited, as is that which is tolerated by the laws of any civilized country in relation to brute animals.”

“The master may sell the slave, dispose of his person, his industry, and his labour. He can do nothing, nor acquire anything, but what must belong to his master.”

Noel goes on to compare a law designed to protect slaves with a law limiting the labor of convicted felons.

According to a statute enacted by one legislature, ten hours make up the longest space out of twenty-four hours, which can be demanded for labor from convicted felons, whose punishment was designed to consist chiefly of hard labour. Yet the innocent slave of South Carolina, under a law specially enacted for his protection, may be subjected to unremitting toil for fifteen hours within the same period!

Report of the Select Committee on the New Orleans Riots (1867) 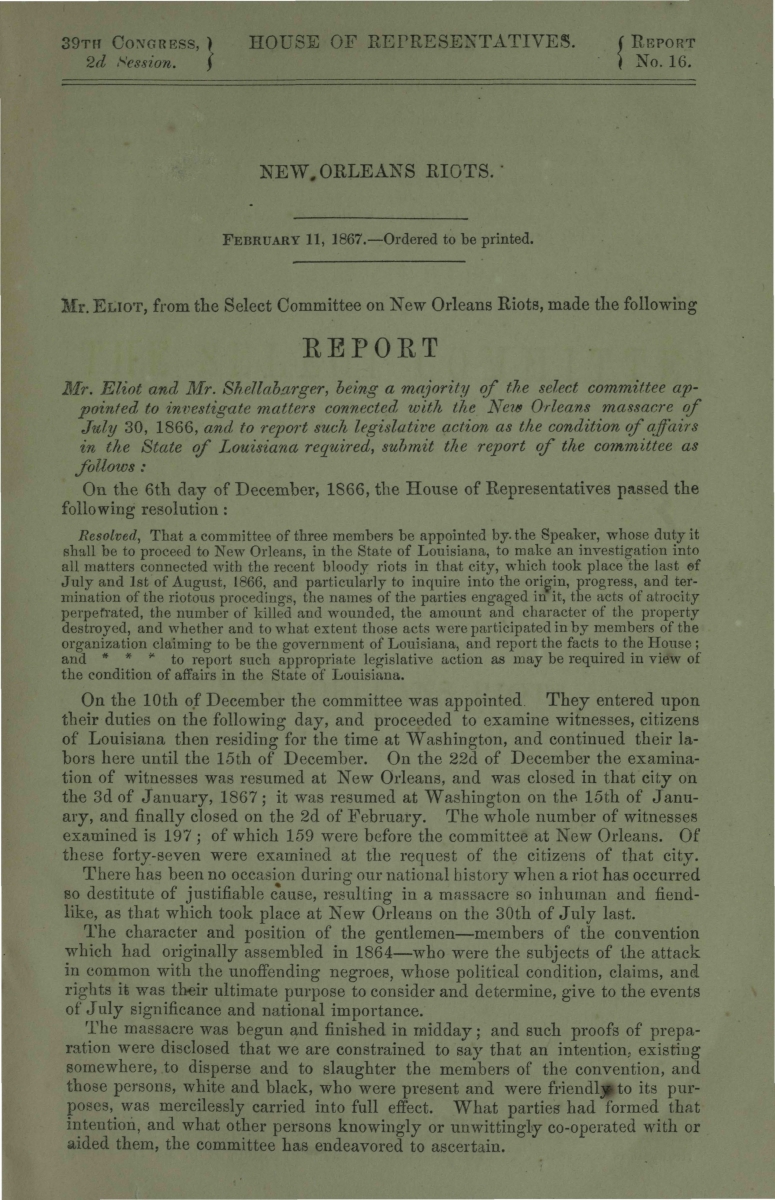 The legislative report of February 11, 1867, begins with a description of the select committee’s purpose and authority.

Resolved, That a committee of three members be appointed by the Speaker, whose duty it shall be to proceed to New Orleans, in the State of Louisiana, to make an investigation into all matters connected with the recent bloody riots in that city, which took place the last of July and 1st of August, 1866, and particularly to inquire into the origin, progress, and termination of the riotous proceedings, the names of the parties engaged in it, the acts of atrocity perpetuated, the number of killed and wounded, the amount and character of the property destroyed, and whether and to what extent those acts were participated in by members of the organization claiming to be the government of Louisiana, and report the facts to the House; and * * * to report such appropriate legislative action as may be required in view of the condition of affairs in the State of Louisiana.

Included in the report is testimony given by eyewitnesses to the violence. Particularly notable is the testimony of the former chief of police of New Orleans who describes watching the police fire on people in the street and seeing other people take cover in doorways and on the stoops of houses. 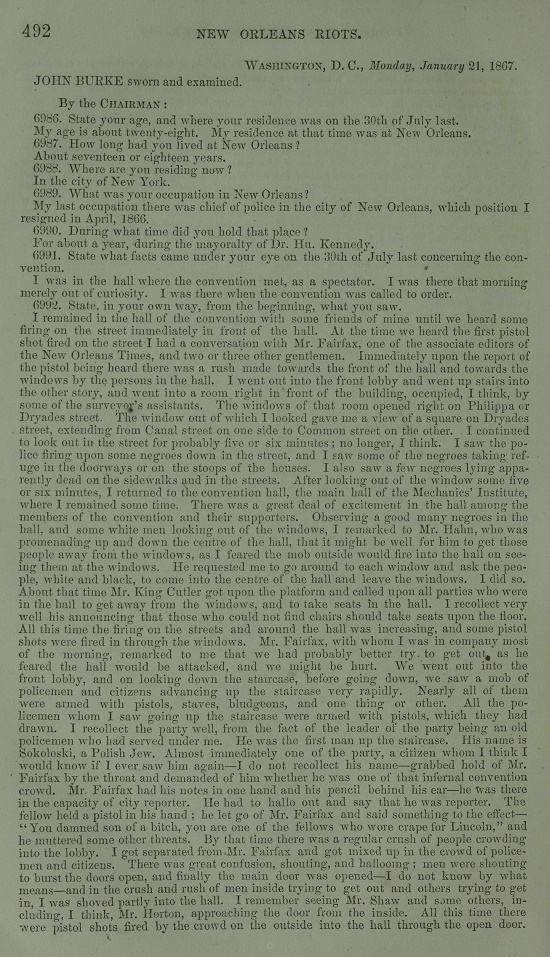