‘Mild as the Harmless Lamb’: Instructions on Conduct for Females 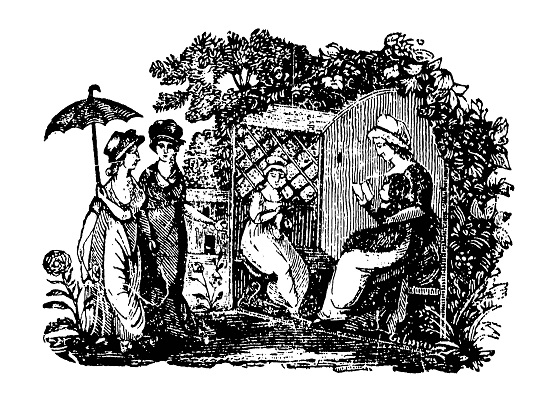 Among several common themes in early books for children, instruction in conduct recurs frequently. Searching American Children’s Books, 1654-1819, a new Readex database, whether using Suggested Searches or employing Advanced Search, will result in many relevant texts. As for girls, the instructions on conduct sometimes coincide with the instructions for boys, but not always. 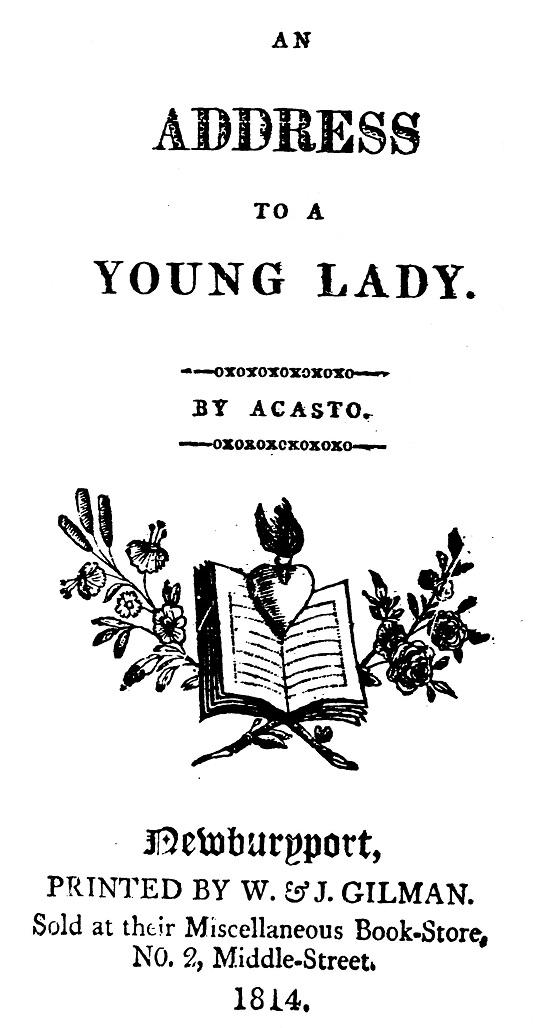 In these early children’s books boys are urged to be tidy and clean. Girls are additionally told quite precisely how to dress and how not to dress and to eschew fashion. James Miltimore (1755-1836) wrote “An Address to a Young Lady. By Acasto” in 1814. “Acasto, a devout and virtuous divine” was a friend to young Lavinia, and he took it to be “his duty, and his happiness to promote her” and instruct her. He extols the inner beauty of a woman’s mind which he argues excels all external ornament. He warns her that “All that education…should be made subservient to the cultivation of such virtues…as can secure happiness to yourself, and diffuse it all around you.” These virtues include “the encouragement of the habit of complacency and ease; of meekness and good humor; of affability, condescension and sincerity; prudence, charity and benevolence; these are the qualities which make a female shine.” 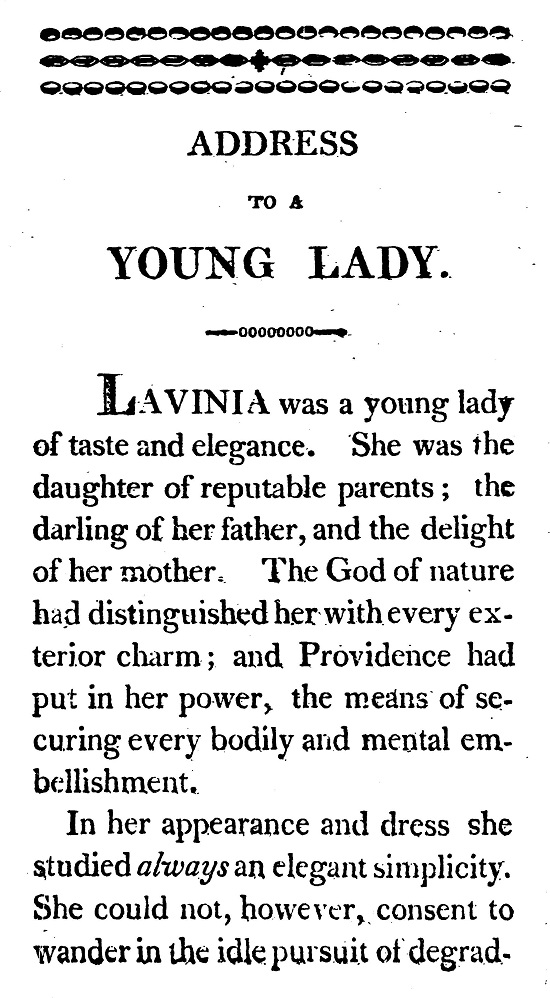 In 1807 an anonymous author published “The Vain Cottager: or, The History of Lucy Franklin. To which are prefixed a few hints to young women in humble life, respecting decency and propriety of dress.” The writer issues stark admonishments against temptations, being a slattern, and finery. Lucy Franklin is heedless of such remonstrations and pays the price.

Bad girls will come to bad ends. Regina Maria Dalton Roche (1764?-1845) wrote “Melinda, or The Victim of Seduction. By Mrs. Roche” which was published in 1804. Melinda suffers for her sins. 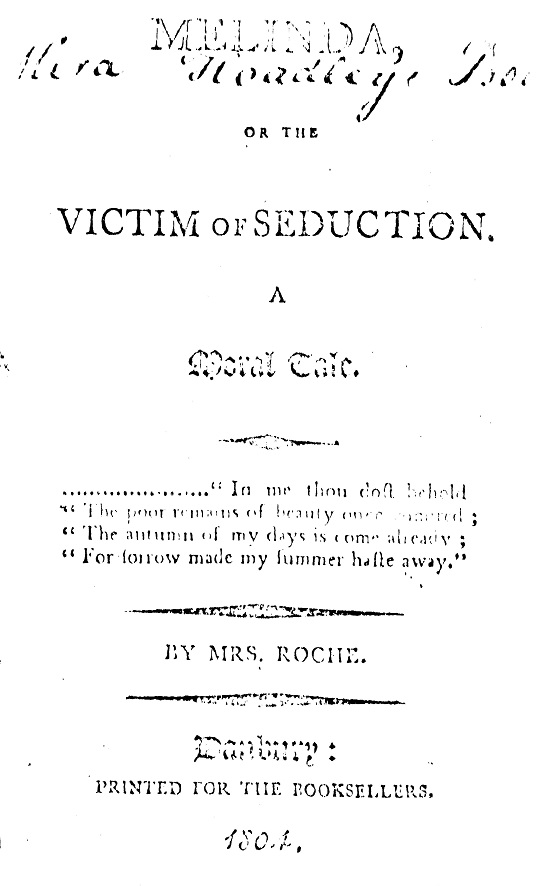 The authors of these books, often women, seem to have been taken with the virtuous poor and the careless wealthy. In 1814 Sarah Savage (1784-1837), using the pseudonym “A Lady,” wrote “The Factory Girl” in which the tale of Mary Burnham, a good and pious but poor eighteen-year-old is told. Mary’s dependent grandmother fears her “going to the factory” because of the reputations of some of girls. Mary prevails, perseveres and is rewarded. 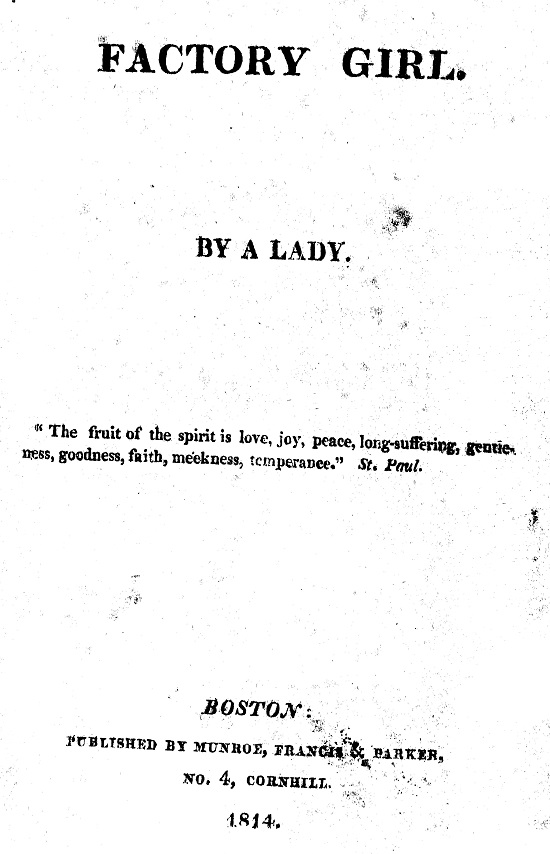 Mary Hopkin Pilkington (1766-1839) authored “Biography for Girls, or Moral and Instructive Examples for the Female Sex.” It is a balanced olio of six stories wherein the protagonist comes to either a good or bad end. The table of contents names the females with sobriquets such as Victim of Pride, Gratitude Displayed, or Vanity Punished.

In “The Little Beggar Girl,” a tale published in 1808, readers have the satisfaction of seeing the good girl, who begged to support her ill mother and is spurned by a wealthy young woman, rewarded, her mother made well and comfortable, and the haughty girl brought low. 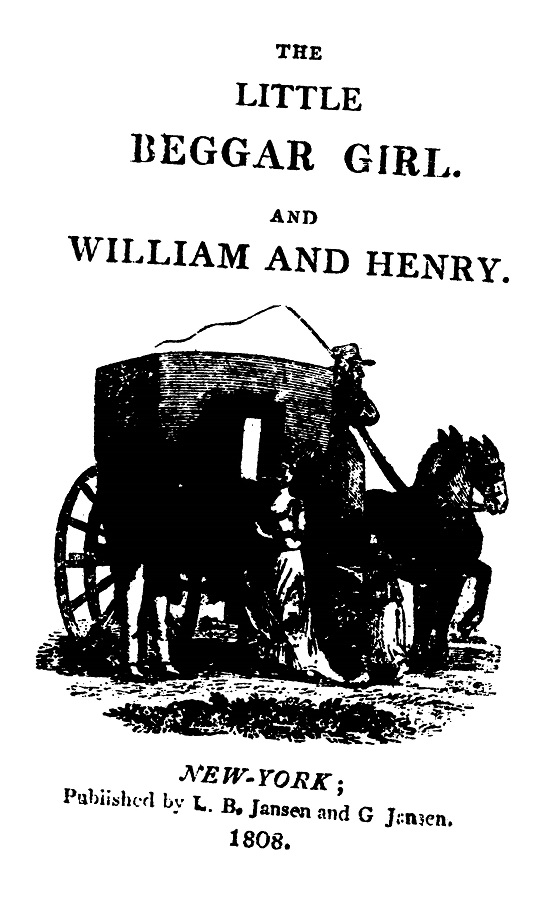 A story titled “Sophy: or, The Punishment of Idleness and Disobedience. A Moral Tale” was written by Lucy Watkins and published in 1819. Watkins introduces little Sophy who “is very self-willed and idle, disregards what kind mama says to her, and is quite a dunce.” Sophy is incorrigibly naughty. In a pet she runs away and thus embarks on a downward spiral of abuse, beggary, and finally freezing to death. 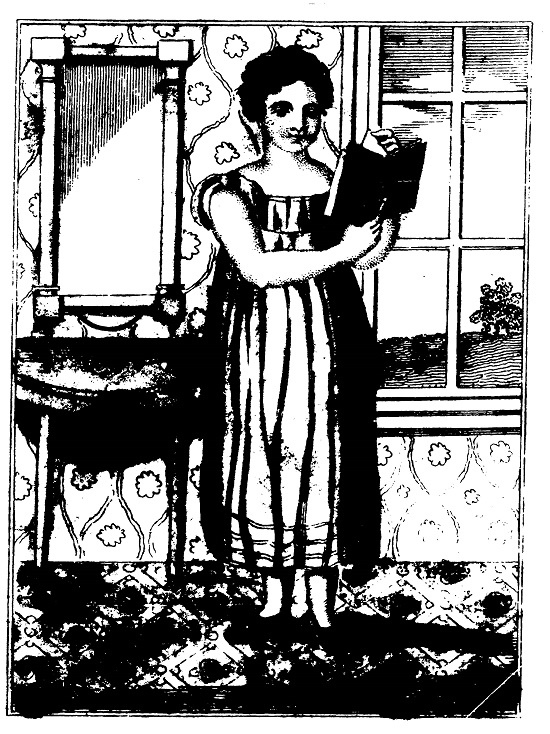 Written by Eliza Kickham Strong Mathews (d. 1802), “The Sisters and the Rose, or History of Ellen Selwyn,” similarly depicts contrasts in behavior and consequences. Fanny is “mild as the harmless lamb, and cheerful as the sportive kid….generous, humane, and feeling.” Louisa, however had “innumerable faults [among which] “none was more conspicuous than her cruelty to animals. She loved to torture every inoffensive insect, bird, &c. not capable of resistance.” It is a given what fates awaited the sisters. 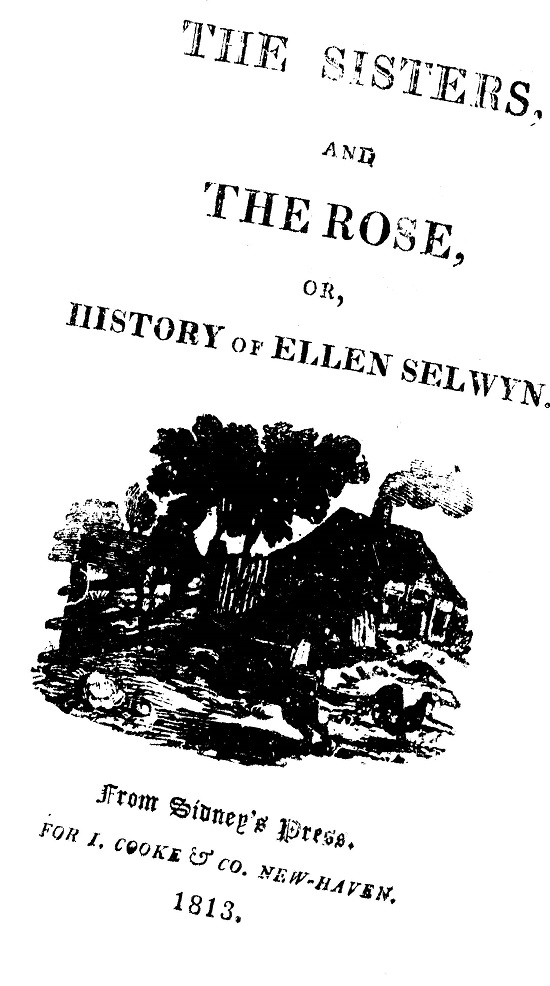 The device of having a kind person observe the courage and compassion of a poor child and rewarding her is used in many of these stories. “The History of Margaret, and the Fable of the Bees” employs this strategy to relate how young Margaret, through the sacrifices and sense of duty needed to care for her aged and infirm parents, impresses a generous man who becomes a patron to her and her family. The moral of the story is made clear in the final paragraph: “Thus Margaret, for her dutiful behavour [sic] in her youth, procured relief for her parents in a manner quite accedental [sic]. She interested a stranger in her behalf, which paved the way to her introduction in many respectable families.” 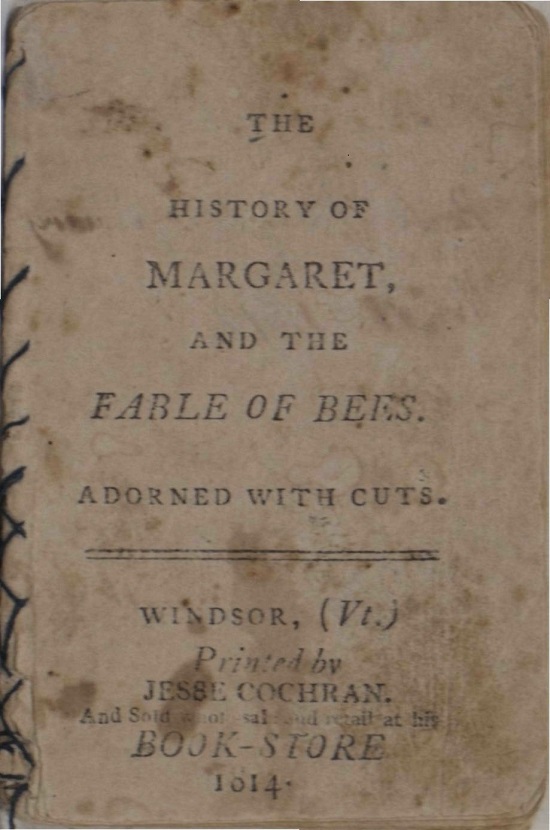 The stories vary but a moral certainty prevails: Good girls will be lifted up from even the direst circumstances. Bad girls will suffer in degradation, be shamed, even die for their disregard of good counsel.