The proliferation of fake news during and after the 2016 U.S. presidential election continues to make fresh headlines. Although today’s delivery system is different, the creation and sharing of fake news itself is not a new problem. Early American Newspapers, Series 1-13, contains dozens of mentions, as seen in these late 19th-century examples. 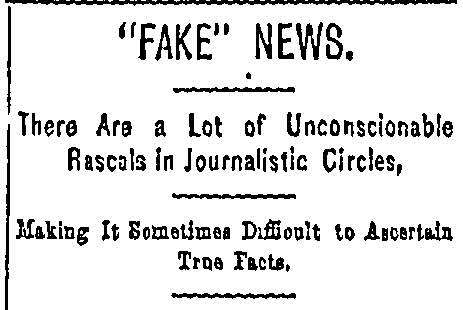 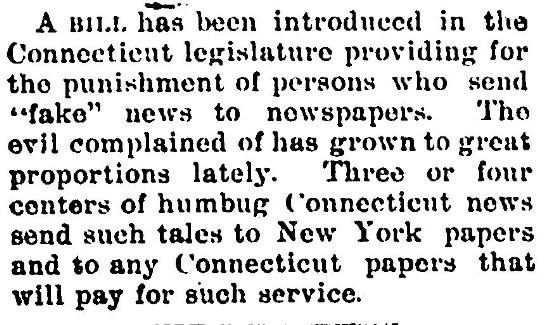 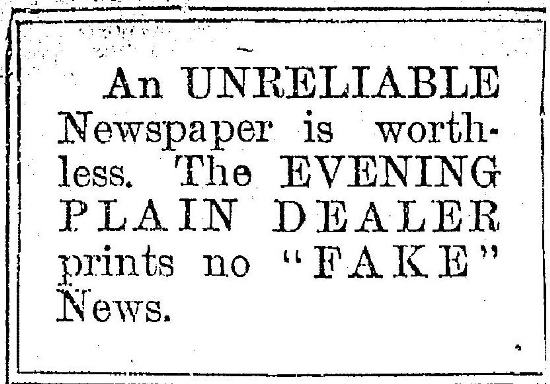 What’s worse than a fake news story? How about a fake news service! During World War I, a Harper’s Weekly article indignantly accused Hearst papers of printing war stories written by non-existent correspondents who claimed to be eyewitnesses on the front lines. The article, discussed and quoted in the Belleville (Illinois) News Democrat on Nov. 12, 1915, was headlined: “How a Ragtime Hearst News Service Fools the Public with Fake News of the Big War in Europe.” Here are excerpts:

Eighty. Count them. You can’t. Neither can Hearst. 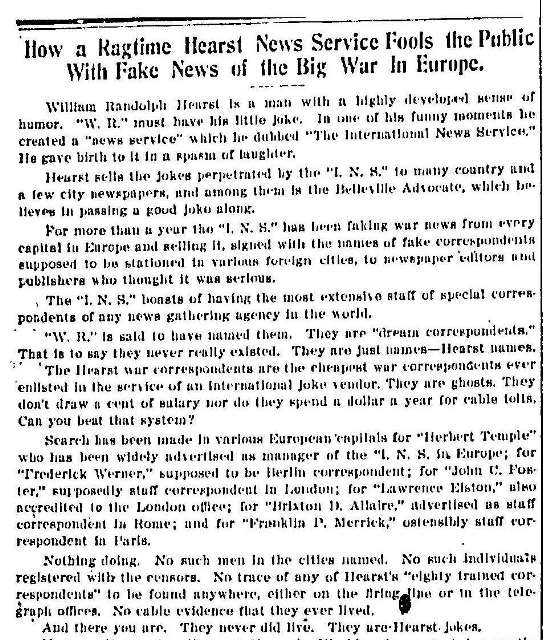 The article details Hearst’s arrangement to reprint articles from several European papers. His organization stripped off the actual news sources and reporter’s names and slapped on phony bylines, including, for example, Lawrence Elston, Brixton D. Allaire and Franklin P. Merrick.

This action follows repeated breaches of faith by the Hearst organization. One of the latest instances was a message in the Chicago Examiner headed ‘London in Flames,’ and purporting to describe a Zeppelin raid. It was never sent from London. 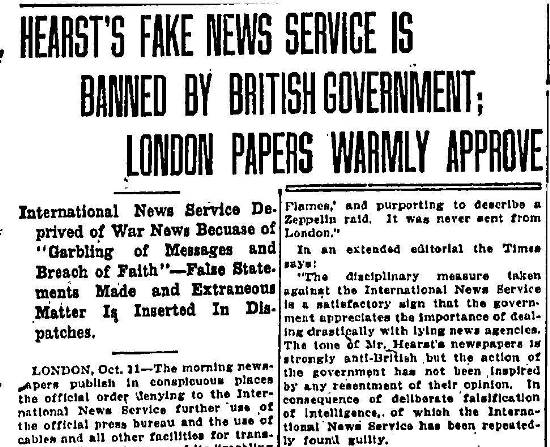 Here’s an earlier case in which one St. Louis newspaper incorrectly claimed its rival had presented fake news. The headline in the July 5, 1897 St. Louis Republic blared “Yesterday’s Fake News in the Post-Dispatch. Its account of a Lynching that Did not Take Place.” The Republic crudely reproduced the Post-Dispatch’s story headlined “They Hung Him to a Giant Tree.” And they added graphics to it as well. 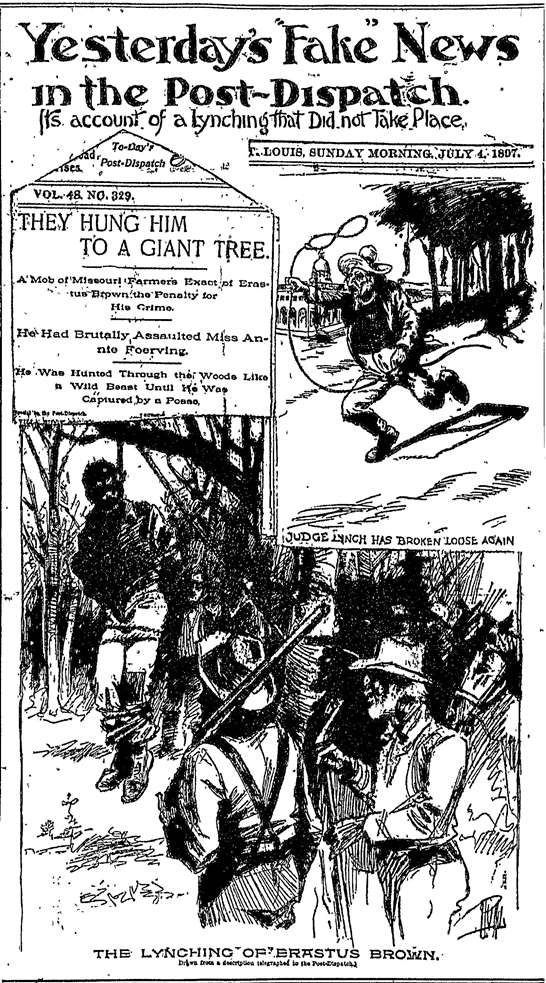 On July 11, 1897, the Republic printed a story headlined “Lynched by a Mob Was Erastus Brown. Masked Men Take the Negro from the Jail at Union and Leave His Lifeless Body Swinging from a Willow Tree.” Brown had been accused of attempting assault on a white girl, and it turns out the local sheriff had attempted to shield him from the mob by putting him in a neighboring jail while proclaiming that the lynching had already been completed. As the article explained:

To save the negro’s life the captors took him to the woods, announced that he had been hanged, described the scene in great detail, then secretly hurried the prisoner to the jail at Union.

For a few hours the secret was kept, then the facts leaked out and the hanging Saturday morning ended the uncertainty.

There was no apology to the Post-Dispatch which had prematurely—but accurately—reported the outcome of the case.

Moving further back in time, here’s an American paper relating the most recent fake news from Paris. In 1872 several newspapers reprinted an article from the Cincinnati Commercial. It was titled “Paris Sensations. The Canard Manufacture in the French Capital.” Here are some excerpts:

They do a style of thing in some of the Paris newspapers—notable in the vivacious Figaro, the sensational Gaulois—which would be ruinous to any American paper that should attempt it. There have been three awful examples of it in a short time. An account was puplished [sic] of an extraordinary tragedy which was said to have taken place in Corsica, in which a beautiful young Corsican lady played the part of assassin in a court room, under the most dramatic and exciting circumstances. The sketch as given in the paper, was very highly colored, but the scene, in all its minute details, was wrought out in such a skillful and natural way that nobody had a doubt of its being an actual occurrence. The affair was all the talk of Paris, which, though always well supplied with excellent horrors, found this one peculiarly piquant, and possessed of entirely novel features. But after a few days the mail from Corsica came in, and it was found that no such tragedy had taken place or been heard of there. It had been developed out of nothing in the brain of a desperate scribbler…

A short time afterward there was another startling sensation. A great lady of the ex-Emperor’s Court, no less a personage than Madame X—herself—caught in a complicated double intrigue—plot and complot—prospective grand scandal—the hour of suicide, private but spectacular—scenery and machinery—enter Monsieur X.—the supreme moment—exit Monsieur X.—Ave Maria—jeweled fingers, diamond necklace, Greek dagger—the catastrophe—and so on till the grand denouement in which Monsieur X—had a ghastly struggle over her corpse, resulting in a pyramid of cadavers. The writer had created the canard from beak to tail, and somehow escaped arrest for publishing false news.

But the most thrilling sensation in Paris of late… 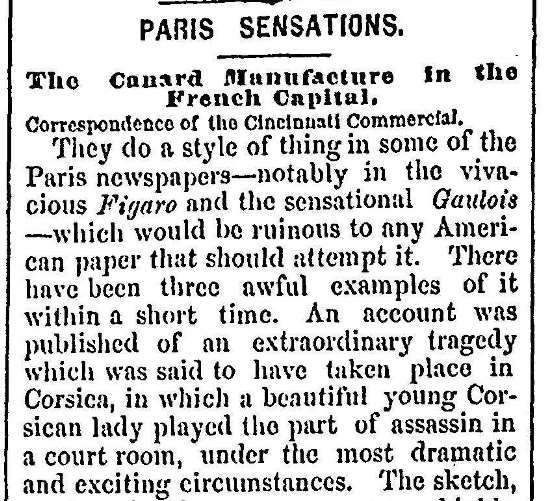 We’ll leave you to discover what could top those two French stories. The American author of the article notes that “it would not be so easy to perpetuate such frauds in this telegraphic country of wide-awake reporters, and any paper which tried to perpetrate them would be quickly given over to the buffetings of Satan.”