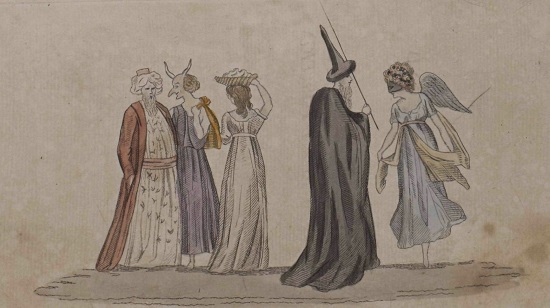 The first release of Supplement 3 from the American Antiquarian Society to the Shaw-Shoemaker digital collection includes: 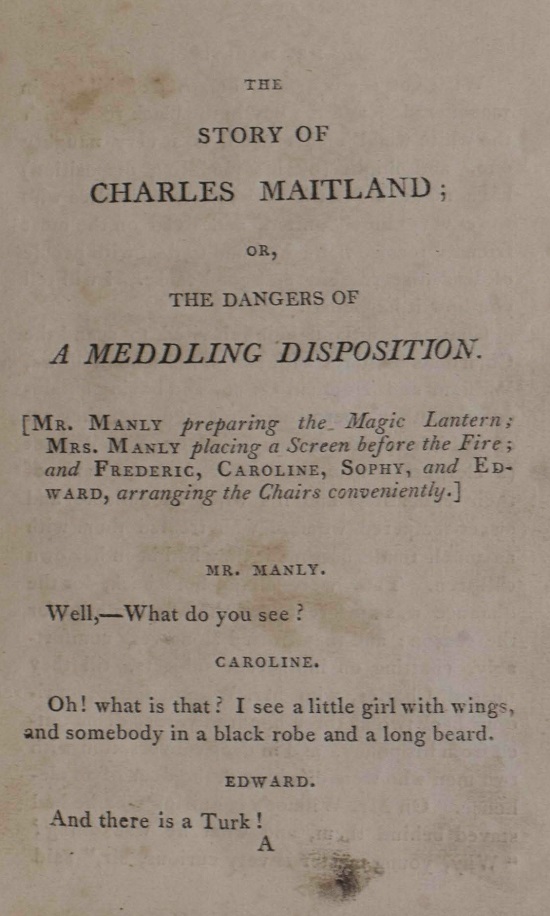 The Story of Charles Maitland; or, The Dangers of a Meddling Disposition (1806)

This rare work tells the story of Charles Maitland, a naughty boy unable to refrain from meddling in other peoples’ affairs. Through this behavior Charles “might (by his meddling disposition) have made a breach between two families who were very much united, and lived on the most friendly terms, if he had had to deal with people of less discernment and good sense.”

Young Charles had been invited to visit two of his schoolmates for the Christmas holidays.  A defining event occurred on the journey from school to home. Charles had fallen behind his party and was found “in deep conversation with two men who were drinking at the door of an alehouse.” When Charles’ adult chaperone asked the men what the boy was doing, one of them said:

“Why, the young master is very curious, sir….neighbor Thomas and I are striking a little bargain, and talking of matters that do not concern him, nor would he understand them if we were to tell him; yet he insists on knowing what the bargain is, that he may tell us which of the two is likely to have the best of it. I can’t help laughing for my part;—he had better go and learn his lesson, and leave us to settle our affairs our own way.”

Charles was abashed, but it is clear more trouble lies ahead as he rode behind his party because “he could not get the better of his inclination to know every body’s business, and to meddle and advise on every subject which came in his way.”

Soon after arriving at the host’s home the family determined to hold a masquerade ball for the entertainment of all the children in the neighborhood. Charles was so eager to know what the other children in the house were planning for their costumes that he employed a combination of disguise and eavesdropping in order to know their plans. As is so often true, he heard but imperfectly when spying which led to a distressing result imperiling the reputation and livelihood of an honorable man.

All is finally clear, and the falsely accused man regains his honor and position, but for Charles:

…it fared much otherwise; the faults in his disposition appeared in such glaring colours, that he was himself thunderstruck at perceiving the bad consequences which might have arisen from his indulging himself in them, and that his passion for meddling in other people’s concerns had tempted him to act towards his companions with the most unjustifiable duplicity.

With that, the young reader is left to believe that Charles had truly learned his lesson and the parents to hope that in his reformed behavior he could act as a good example for them. 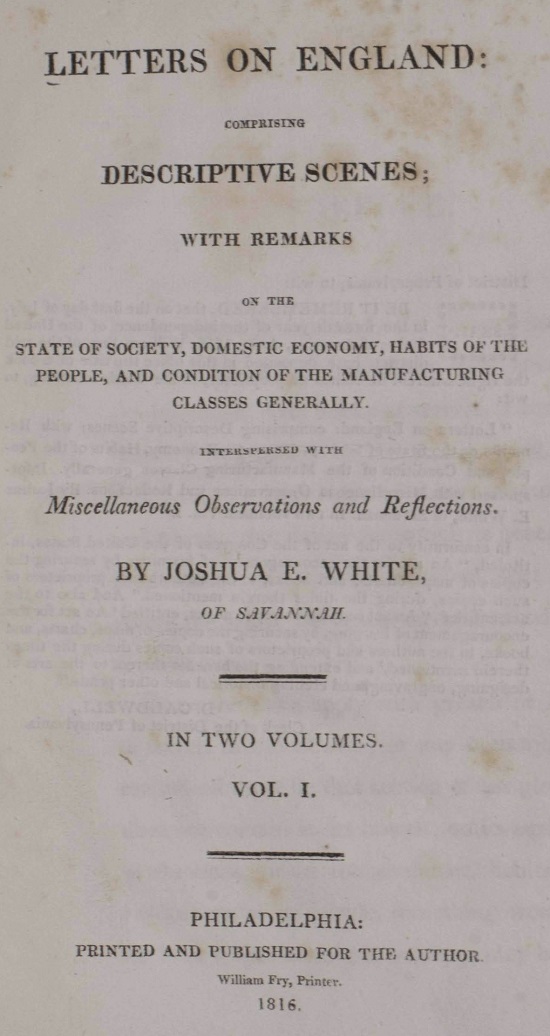 Letters on England: Comprising Descriptive Scenes; with Remarks on the State of Society, Domestic Economy, Habits of the People, and Condition of the Manufacturing Classes Generally (1816)

By Joshua E. White, of Savannah

At first this imprint appears to be simply a travelogue written by an articulate and curious gentleman from the American South. Mr. White is alert to everything around him as he travels extensively and relatively comfortably around England in the middle of the second decade of the 19th century. Clearly, White was a well-connected gentleman equipped with many letters of introduction to successful manufacturers. He expresses a lively interest in the manufacturing capacities of these early industrialists and has the mechanical competency to appreciate and describe what he sees. Further, White is fascinated by the manners and customs he encounters regardless of the social classes he observes. Indeed, the surprising aspect of this book is the increasing ardor with which the author describes the dehumanized lives of the factory workers and his conviction that America must never emulate the English in establishing vast industrial enterprises dependent on the debased labor of women and children as well as men.

One of White’s first visits to a factory was in Liverpool, Herculaneum Pottery:

…the works of which are very extensive, and every possible variety of useful and ornamental ware is made to please the most rude, or the most refined or fastidious taste…

…In passing from room to room of this extensive establishment to see the variety of processes which the wares undergo, I was particularly interested to behold boys and girls usefully and profitably engaged in painting flowers and various other things, from copies before them, on mugs, bowls, cups, &c. before they ae placed in the oven. Necessity is the strongest reason which can be offered, for employing children in this and similar ways, at any age which, in our own country, is devoted to playfulness, or in receiving the rudiments of education. Against this powerful law it is vain to offer any arguments, founded on the moral or physical evils which may result from crowding children together of both sexes, without a guide for their conduct, or rules for their behaviour. I contend for its immoral influence, and the danger of its impairing their constitutions.

He continues in this argument deploring the neglect of education and the absence of any control on the children’s “evil propensities” and adds “On this subject I shall have occasion hereafter to make some remarks.” Despite White’s sentiments regarding child labor, he is not reluctant to display a less charitable attitude toward American slaves. When favorably comparing English servants with human chattel in America, he states:

Without the disgusting filth, habitual carelessness, and general depravity which too generally distinguish the Africans and their descendants, English servants are withal civil, obliging, active, and obedient.

Although White is rhapsodic about the charm and gentility with which he is welcomed into the homes of many of the English he is introduced to, including many factory owners, he does not relent on his fear of societal destruction brought about by the conditions of the men, women, and children whom they employ.

In my remarks on Manchester, I had occasion to notice the state of manufacturing people, and observations made subsequent to the time of my leaving the place, have not induced me to change my opinion very materially on the subject. In Leeds as well as in Sheffield, I think their situation less pitiable than in Manchester. There are a less number herded together in extensive buildings; and many articles which ultimately find their way to the market towns, are made in families throughout the country, and in the villages. Made in this way, the same injurious effects to health and morals do not supervene, as generally do where a hundred or more persons are confined in a close room, the air of which is filled with the exhalations from their own lungs, the effluvia from various metallic substances, or particles of wool, cotton and flax, which are floating in it, in an invisible form.

Throughout, despite his finding much charm in the English countryside, much to admire in many of their cities and towns, and gentility and hospitality in its more prosperous subjects, White returns repeatedly to his genuine horror at the idea of the English culture of manufactory ever becoming established in the United States.

I have again and again lamented the establishment and increase of such manufactures in the United States, as require the indiscriminate collection of men and women, boys and girls, in the same apartments. I deprecate them, from a conviction that they militate against the best interests of the people; that they are ill suited to our republican form of government; and that, as just remarked, they are opposed to the increase of virtuous habits and to longevity….Better is it to make our citizens agriculturalists than manufacturers. I wish to be distinctly understood; and that in expressing opinions that are averse to the increase of manufactures in my own country, I do not mean to apply them to those more strictly called domestic, or which are confined to families; but to the establishment of such as have given to England a far-famed celebrity, and stamped a character upon the people who are engaged in them, which my countrymen should not envy. 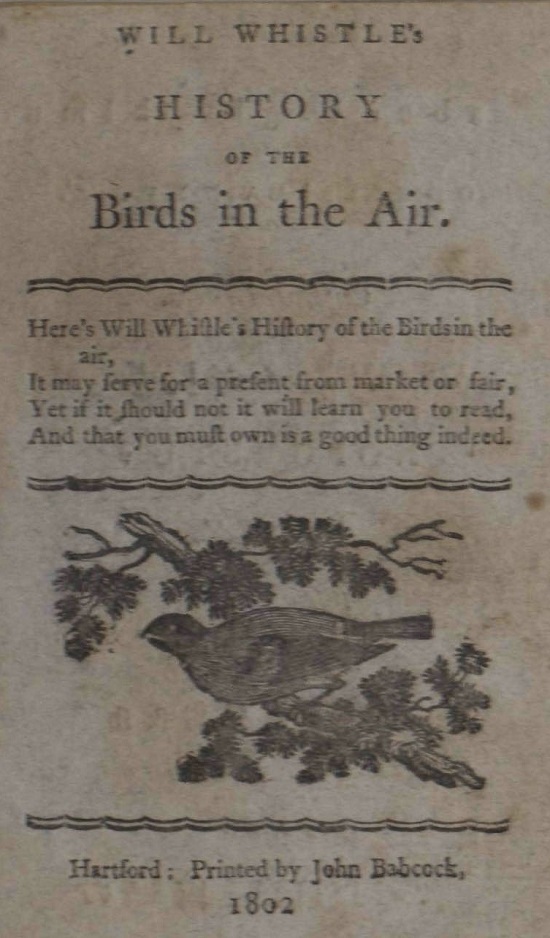 In this exceedingly scarce work, Will Whistle [likely a pseudonym] includes in this chapbook short verses and accompanying relief prints to introduce the young reader to a variety of birds. He introduces his purpose:

Here’s Will Whistle’s History of the Birds in the air,

It may serve for a present from market or fair,

Yet if it should not it will learn you to read,

And that you must own is a good thing indeed. 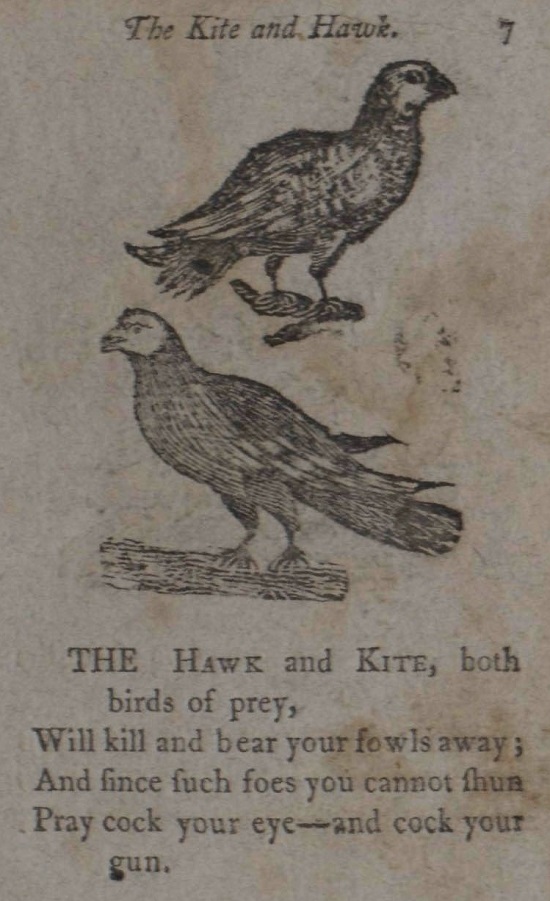 The Hawk and the Kite, both birds of prey,

Will kill and bear your fowls away;

And since such foes you cannot shun 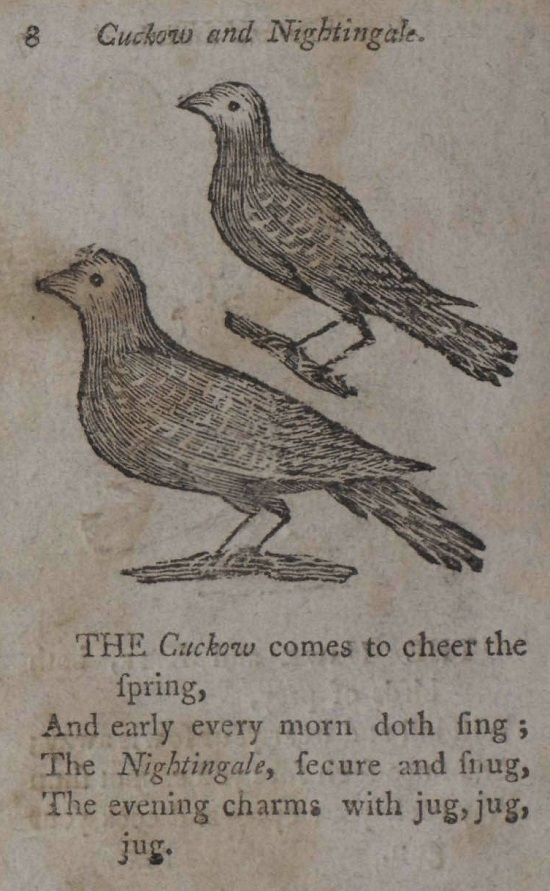 The Cuckow comes to cheer the spring,

And early every morn doth sing;

The Nightingale, secure and snug, 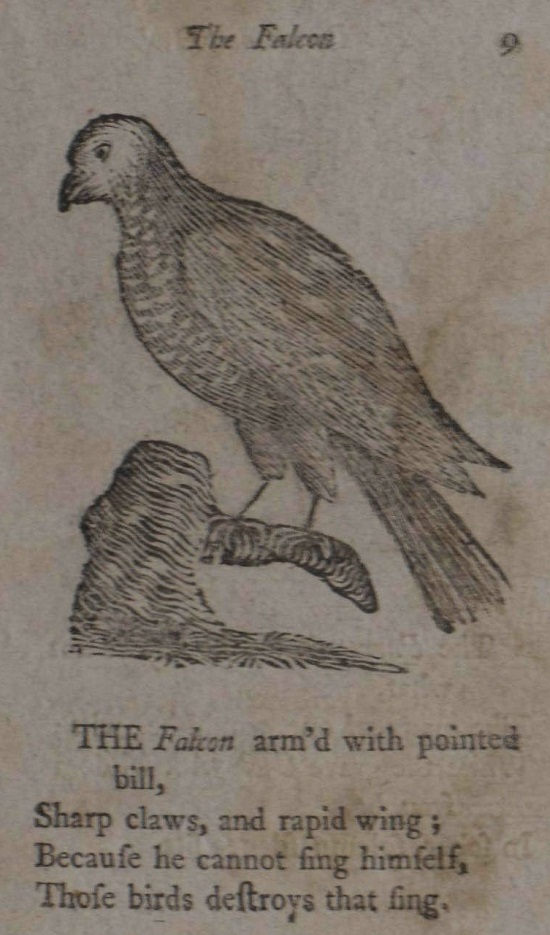 The Falcon arm’d with pointed bill,

Because he cannot sing himself,

Those birds destroys that sing. 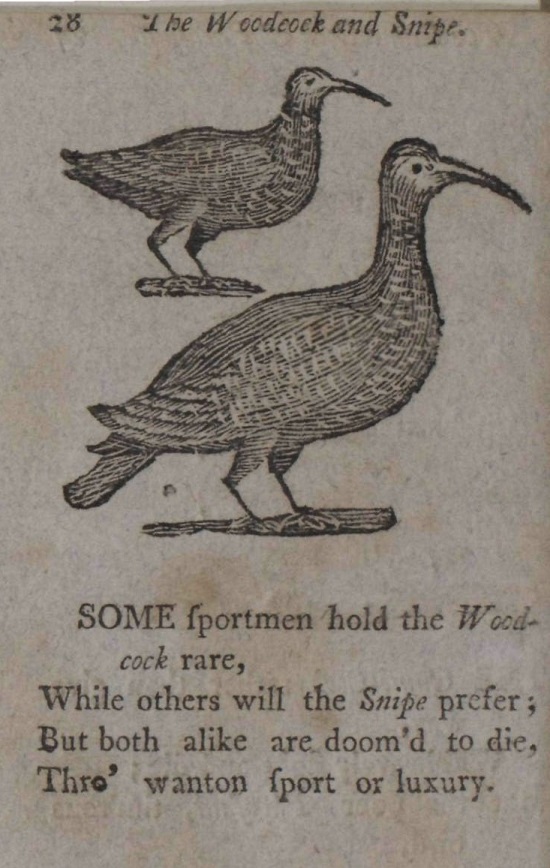 Some sportsmen hold the Woodcock rare,

While others will the Snipe prefer;

But both alike are doom’d to die,