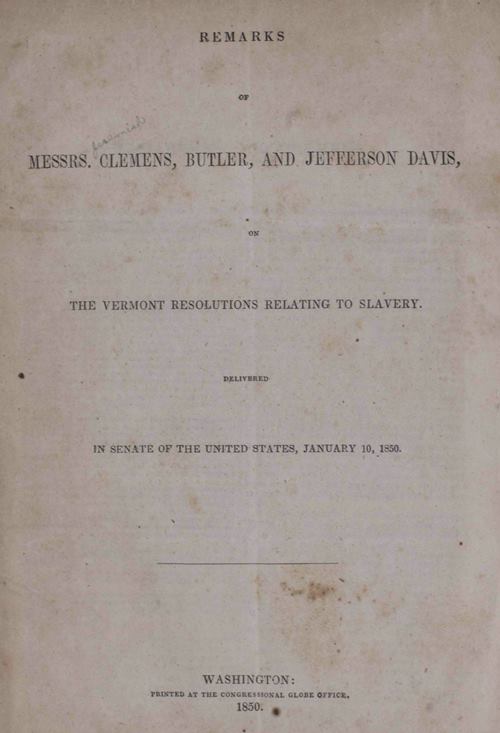 I wish to show my constituents that the declarations so often and so earnestly made that the North does not intend to interfere with slavery where it exists is entirely false, and intended only to deceive. This game has been played with some success heretofore, and I should consider myself very culpable if I did not now expose it. It is true, we still have the declaration of Senators that all interferences with slavery in the States is foreign to their purposes, but it is asking too much of our credulity to expect us to believe such statements when they are accompanied by the introduction of resolutions directly contradicting their assertions.

I say it now, and with perfect sincerity and candor, that the people of the State which I represent, and the people of the southern States in general, have never taken measures thus far with the view or wish that they should result in disunion. I go further, and say that their acquiescence in compromise is a refutation of the charges that have been made against them. What compromise that did not require a sacrifice of right and honor has not been acceded to on the part of the South? What compromise that she entered into has she violated? These are questions that may be obviated by evasion or denunciation of a self-sustaining majority, but honesty will only answer them before the tribunal of history. The past cannot be changed, and it will go to show that the South has made sacrifices to form the Union, and have submitted to unequal compromises to preserve it. The North has presumed on that love of union to sanction their progressive and arrogant pretensions. 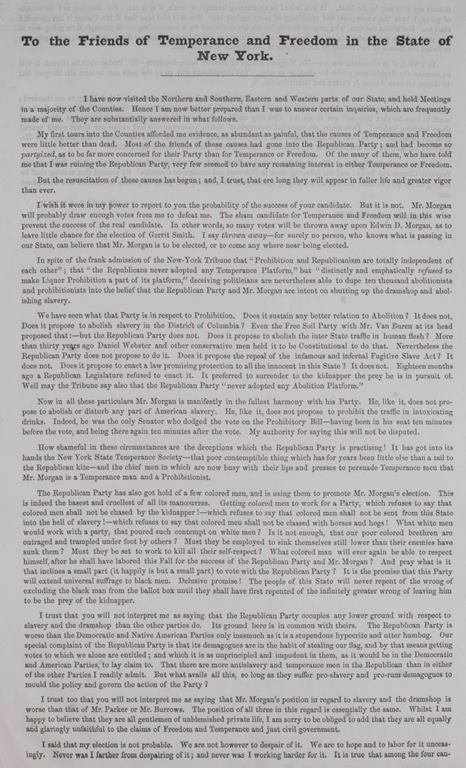 Gerrit Smith was an abolitionist, philanthropist, social reformer, and perennial candidate for the presidency, running in 1848, 1856, and 1860. Smith was involved in the Temperance and Colonization Movements, and he was one of the Secret Six who funded John Brown’s raid at Harpers Ferry.

Speaking in 1858, Smith describes a shift in politics he has observed after traveling throughout New York:

My first tours into the Counties afforded me evidence, as abundant as painful, that the causes of Temperance and Freedom were little better than dead. Most of the friends of these causes had gone into the Republican Party; and had become so partyized, as to be far more concerned for their Party than for Temperance or Freedom. Of the many of them, who have told me that I was ruining the Republican Party, very few seemed to have any remaining interest in either Temperance or Freedom.

He continues, warning that:

deceiving politicians are nevertheless able to dupe ten thousand abolitionists and prohibitionists into the belief that the Republican Party…[is] intent on shutting up the dramshop and abolishing slavery.

The Republican Party: Its Origin, Necessity and Permanence (1860) 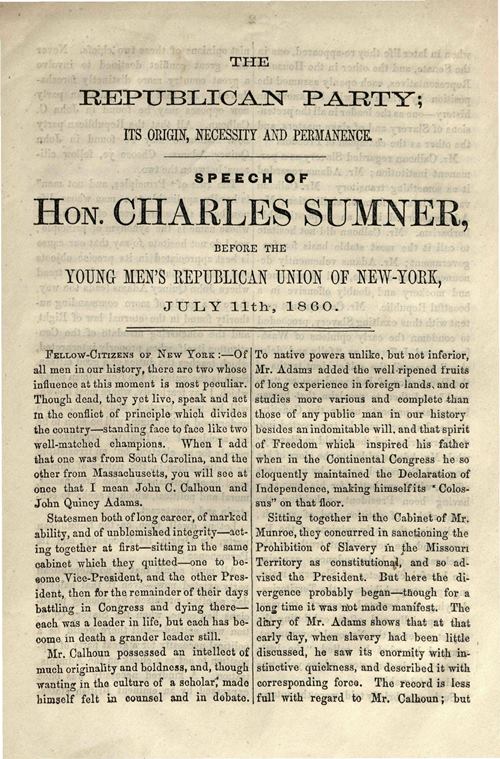 Speaking before the Young Men's Republican Union of New York on July 11, 1860, Charles Sumner begins by referring to a pair of statesmen from the previous generation who symbolize the politics of the day:

Of all men in our history, there are two whose influence at this moment is most peculiar. Though dead, they yet live, speak and act in the conflict of principles which divides the country – standing face to face like two well-matched champions. When I add that one was from South Carolina, and the other from Massachusetts, you will see at once that I mean John C. Calhoun and John Quincy Adams.

He continues the juxtaposition, saying:

Mr. Calhoun regarded Slavery as a permanent institution; Mr. Adams regarded it as something transitory. Mr. Calhoun vaunted it as a form of civilization; Mr. Adams scorned it as an unquestionable barbarism. Mr. Calhoun did not hesitate to call it the most stable basis for free government; Mr. Adams vehemently denounced it as a curse, full of weakness and mockery and doubly offensive in a boastful Republic. Mr. Calhoun, not content with thus exalting Slavery, proceeded to condemn the early opinions of Washington and Jefferson as “folly and delusion,” to assail the self-evident truths of the Declaration of Independence as “absurd,” and then to proclaim that human beings are property under the Constitution and as such, may be transported into the Territories and there held in Slavery; while Mr. Adams added to the glory of his long and diversified career, by persistent efforts, which are better for his fame than having been President – upholding the great rights of petition and of speech; vindicating the early opinions of the Fathers, and the self-evident truths of the Declaration of Independence; exposing the hateful character of Slavery; insisting upon its prohibition in the Territories; denying the asserted property in man, and especially and often exhibiting the unjust power in the National Government, usurped by what he called “the little cluster” of slave-masters, whose yoke was to him intolerable.