‘Seize the Whole of This Unsuspecting Multitude’: Highlights from Afro-Americana Imprints, 1535-1922

The most recent release of Afro-Americana Imprints, 1535-1922: From the Library Company of Philadelphia contains an 18th-century history of Algiers, a debate on the slave-trade in the British Parliament, and a speech on the Compromise of 1850 from the floor of the U.S. Senate. 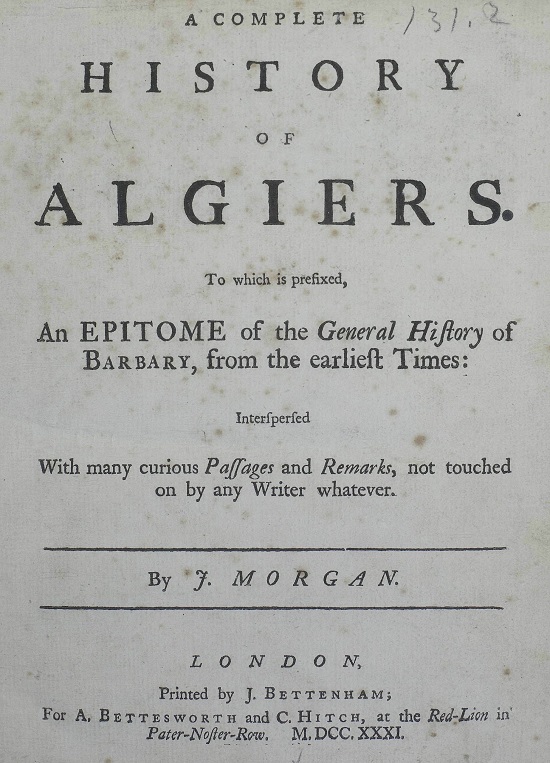 Joseph Morgan was an early 18th century British historian and editor. In this history of Algiers, “to which is prefixed, an epitome of the general history of Barbary, from the earliest times: interspersed with many curious passages and remarks, not touched on by any writer whatever,” Morgan covers vast expanses of time and territory. He also includes the following information about a well-known desert traveler.

To what I already said concerning Camels, I shall add, that those Creatures, which, I took Notice, are now in far greater Plenty than they seem formerly to have been, are of great and unvaluable [invaluable] Use to their Possessors. The Moors of these Days have few of them, in Comparison of what the Arabs breed; they being their chief Wealth. They ask not, how many thousand Ducats a Man is worth, but, how many hundreds, or thousands of Camels he is Master of. The Camels are to them the very Nerves of War, and the Regales of Peace. Without them they could not possibly reach a Retreat in the Deserts, nor subsist when there. Provided with a numerous Drove of Camels, a Body of 1000 resolute Fellows, if they have but twelve Hours Warning, can transport themselves where all the Powers of Africa dare not attempt to follow them. Tho’ their Motion is but slow, never exceeding a Foot-Pace, yet, in one Night’s March, they will be out of Danger of being over-taken by any Body of Horse, not accustomed to those arid Regions, who will be in great Necessity of Rest and Refreshment, while the Camels and their Drivers can very well hold on for thirty or forty Hours longer, without stopping… 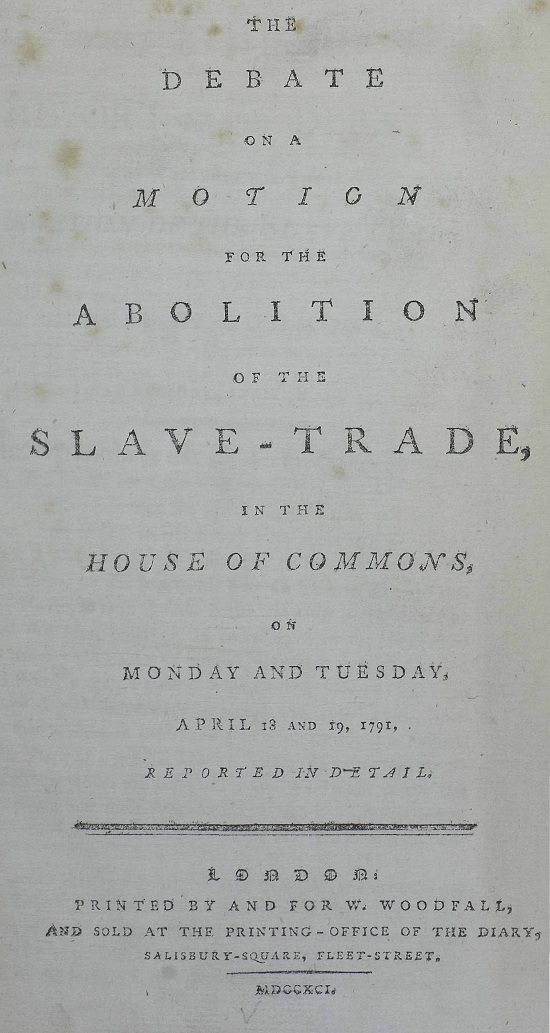 This report on a motion for the abolition of the slave-trade debated in the House of Commons, on Monday and Tuesday, April 18 and 19, 1791, includes numerous descriptions of the means utilized by slave traders to acquire their human commodity.

When General Rooke, a respectable Member of that House, was commanding in his Majesty’s settlement at Goree, some of the subjects of a neighboring king, with whom he was on terms of amity, had come to pay him a friendly visit; there were from 100 to 150 of them, men, women, and children; all was gaiety and merriment; it was a scene to gladden the saddest, and to soften the hardest heart: but a Slave-Captain, ever faithful to the interests of his employers, is not so soon thrown off his guard; with what astonishment would the Committee hear, that in the midst of this festivity, it was proposed to General Rooke to seize the whole of this unsuspecting multitude, hurry them on board the ships, and carry them off to the West Indies. Was there ever a man bold enough to venture on such a proposal? Not one only, but three! three English Slave-Captains preferred it as their joint request, alleging the precedent of a former Governor!

Nor were the kidnapping and enslavement of Africans limited to moments of opportunism, as the report describes:

But it was not only by acts of outrage that these poor creatures were brought into bondage, but, as he had said before, every other possible mode was resorted to, and in particular the administration of justice was turned into an engine for that end: the smallest crimes were punished by a fine equal to the value of one or more slaves, which, if the party was unable to pay, he was himself to be sold into slavery. Crimes were fabricated, false accusations and convictions were resorted to, and persons sometimes employed to seduce the unwary to the commission of crimes with a view to the conviction and sale of the culprit.

Speech of Mr. Miller, of New Jersey, on the Propositions to Compromise the Slavery Question, and the Admission of California into the Union (1850) 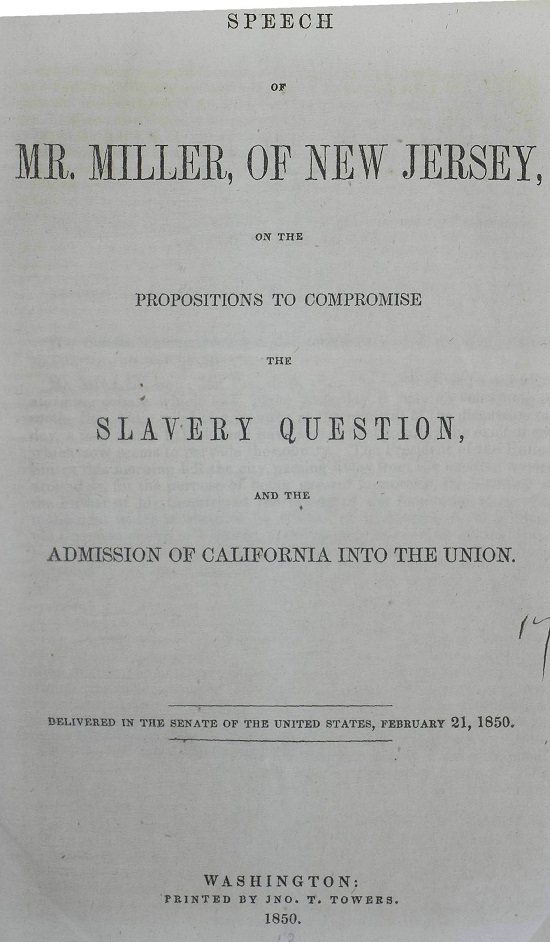 On February 21, 1850, New Jersey Senator Jacob Welsh Miller spoke on the floor of the Senate continuing “the exciting and somewhat alarming debate which took place yesterday.” Responding to the charges made by Southern Senators from both the previous day and previous session of Congress, Miller said:

These charges are of a grave and serious nature, and it is due to the honor of the parties and to the peace of the Union that they should be met and answered. And if it be true that the North has for a series of years been engaged in committing these aggressions upon the rights of their sister States, it is high time that they should be exposed, and a remedy provided against repetition. For my own State, I am sure she is all unconscious of any aggressions on her part upon the rights of any State in the Union; and if any have been perpetrated by her, she will be ready at all times, here and elsewhere, to make every proper atonement and to consent to such laws as would leave no apprehension of their renewal.

The general charge is this: that the North has committed certain high-handed acts of aggression on the constitutional rights of the South. This charge first assumed a responsible shape in a celebrated address known as the Southern Address, and published during the last session of Congress. In that address you will find this general charge, with specifications. I have looked into that address, and I find that the aggressions, as there set forth, are three in number. In the first place we are charged with violating the Constitution relative to fugitive slaves; second, with attempts to abolish slavery in the District of Columbia; thirdly, with prohibiting slavery from the Territories of the United States by an act of Congress.

In that address it is also stated that the objects of these repeated aggressions are to overthrow the institution of slavery in the States; second, the emancipation of the slaves, and their elevation to an equality with their masters; and third, a union of the North with the emancipated slaves of the South, and the exclusion of the white race. These are monstrous objects, and, if true, I do not wonder that the South are in arms against us of the North.

Now, Mr. President, I intend to plead to this indictment of the South against the North, not guilty; and, in the first place, I shall show that but one of these charges is true in fact, and that one not true in law.