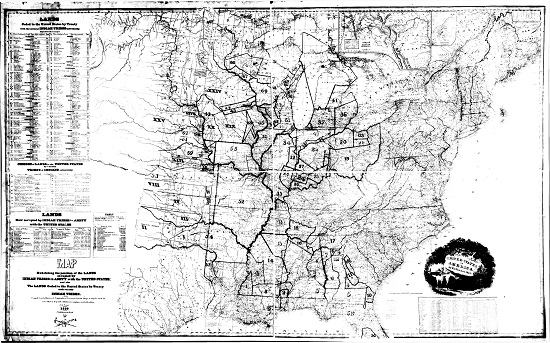 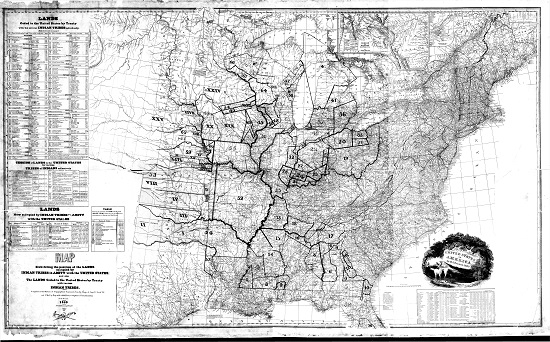 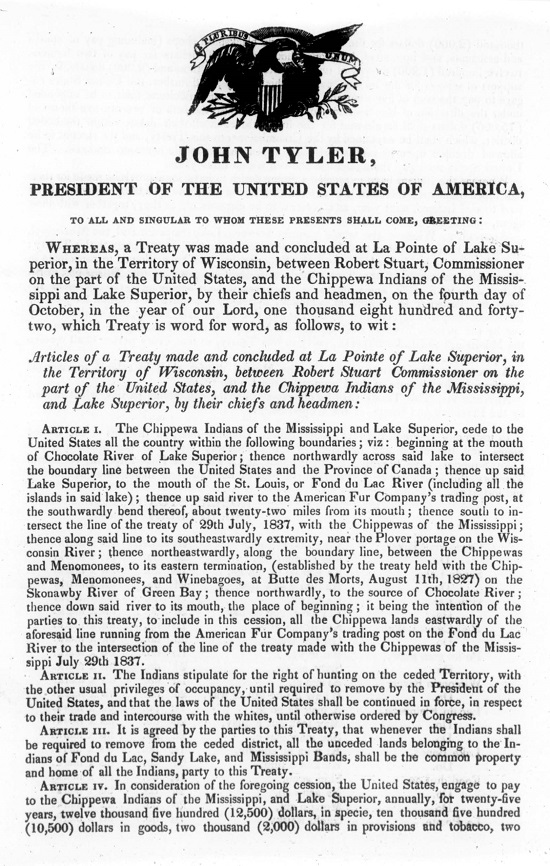 Article 1. The Chippewa Indians of the Mississippi and Lake Superior, cede to the United States all the country within the following boundaries….it being the intention of the parties to this treaty, to include in this cession, all the Chippewa lands eastwardly of the aforesaid line running from the American Fur Company’s trading post on the Fond du Lac River to the intersection of the line of the treaty made with the Chippewas of the Mississippi July 29th, 1837.

Article II. The Indians stipulate for the right of hunting on the ceded Territory, with the usual privileges of occupancy, until required to remove by the President of the United States, and that the laws of the United States shall be continued in force, in respect to their trade and intercourse with the whites, until otherwise ordered by Congress.

Article III. It is agreed by the parties to this Treaty, that whenever the Indians shall be required to remove from the ceded district, all the unceded lands belonging to the Indians of Fond du Lac, Sandy Lake, and Mississippi Bands, shall be the common property and home of all the Indians, party to this Treaty.

Article IV details extensively the promised annuity payments and their breakdown in goods, services, and currency. 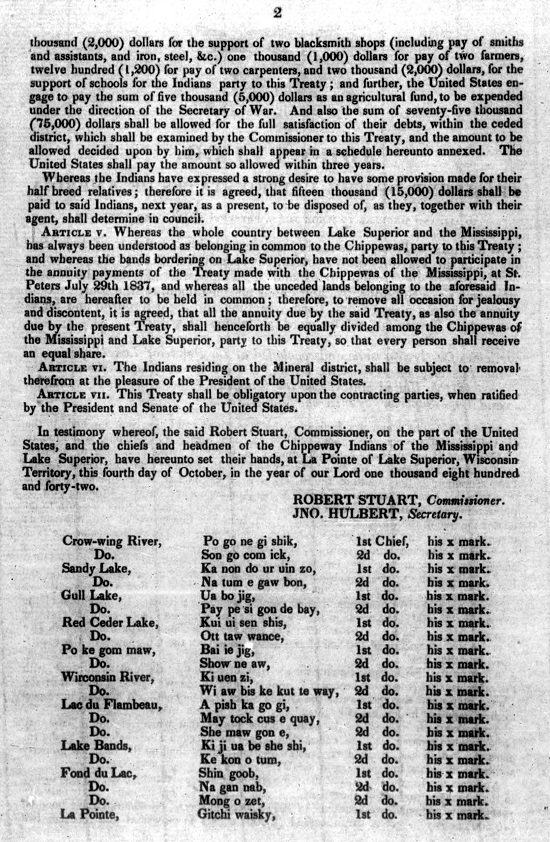 Article V though seems to muddy those details by altering a previously signed treaty and combining the payments due from both treaties into this pact.

Article V. Whereas the whole country between Lake Superior and the Mississippi has always been understood as belonging in common to the Chippewas…and whereas the bands bordering on Lake Superior, have not been allowed to participate in the annuity payments of the Treaty made with the Chippewas of the Mississippi…and whereas all the unceded lands belonging to the aforesaid Indians, are hereafter to be held in common; therefore, to remove all occasion for jealousy and discontent, it is agreed, that all the annuity due by the said Treaty, as also the annuity due by the present Treaty, shall henceforth be equally divided among the Chippewas of the Mississippi and Lake Superior…so that every person shall receive an equal share.

Article VI. The Indians residing on the Mineral district, shall be subject to removal therefrom at the pleasure of the President of the United States. 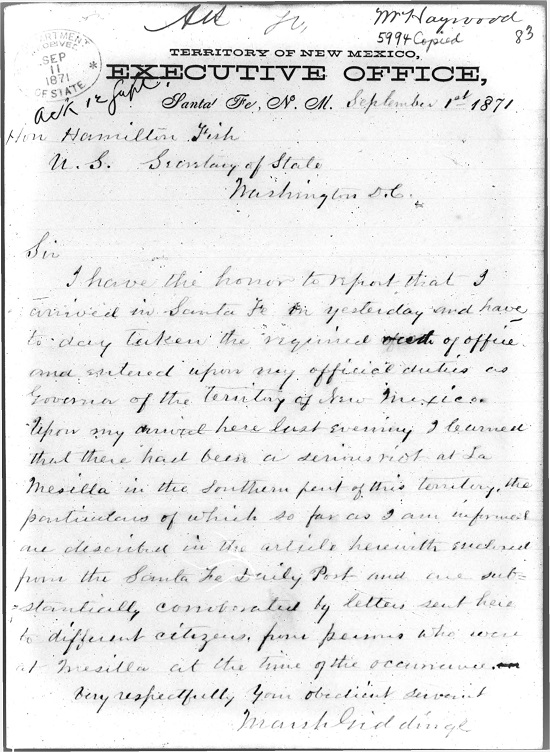 Prior to serving as Governor of New Mexico Territory, Marsh Giddings (1816-1875) was elected as a Justice of the Peace and a member of the Michigan State House of Representatives, served as a probate judge, and was nominated to be consul-general of the United States at Calcutta, India.

As his letter to Secretary of State Hamilton Fish indicates, his tenure as governor began inauspiciously.

Sir, I have the honor to report that I arrived in Santa Fe on yesterday and have to-day taken the required oath of office and entered upon my official duties as Governor of the Territory of New Mexico. Upon my arrival here last evening I learned that there had been a serious riot at La Mesilla in the southern part of this territory, the particulars of which so far as I am informed are described in the article herewith enclosed from the Santa Fe Daily Post...

The article that Giddings attached states:

The election excitement in this valley culminated to-day in one of the most fearful affrays it has ever been my ill fortune to witness. It is no exaggeration to say that the plaza has been literally drenched with blood. At the present writing it is known that seven persons have been killed while the estimate of wounded reaches as high as thirty of whom seven or eight are wounded mortally. From five o’clock this afternoon until six our plaza resounded with pistol shots, groans, yells, and execrations. For full fifteen minutes the firing was incessant and continued during the rest of the hour with occasional intermission. At present it seems utterly impossible to ascertain the exact origin of the affair. A dozen conflicting statements have been made in my presence—none of which I feel warranted in accepting as strictly correct. The facts so far as ascertained beyond question I will endeavor to give as briefly as possible.

The republican and democratic parties had each selected to-day as the most suitable time for the grand demonstration of the campaign, and at an early hour this morning both parties commenced their preparations. I think the leaders on both sides were desirous of avoiding a disturbance, and the respective parties formed in procession and passed each other’s place of meeting without any outbreak. In fact peace reigned until the meetings had adjourned and the processions had reformed. At five P.M. both lines were marching through the plaza in high state of excitement exchanging defiant vivas, when the sharp crack of a pistol was heard and in a moment all was confusion. At this time there must have been at least a thousand people in the plaza. The first shot was quickly followed by others and the firing at once became general. The scene which ensued can readily be imagined. Men, women, and children rushed hither and thither in a state of utter distraction. The dead and wounded fell upon all sides, and non-combatants hurried in every direction for shelter. As I have said the more determined of the partizans [sic] kept up a sharp fire upon each other for about fifteen minutes and then came a brief lull. A desultory fire was kept up from house tops, windows, and doors until about six P.M. when quiet once more reigned. The plaza is now entirely deserted and but few dare to venture upon the street. A courier has been sent to Fort Selden for troops and as soon as they arrive an effort will be made to ascertain the cause of the first shot and to bring all guilty parties to justice.

A second article in the same newspaper offers additional perspective:

One of the most disgraceful and horrible affairs occurred at La Mesilla last evening that ever have been witnessed in this lower country, and as near as I can learn, the circumstances are as follows.

For the last two months the political lines have been drawn and sides taken in the contest with more bitter feeling on both sides than I have ever witnessed in any contest before and, to make it worse, a few persons who would desire to be considered political leaders, have done everything that low cunning could devise to embitter those in “their” party toward the other party, until finally it must culminate in deeds of horror, as it did yesterday.

It seems that the Democrats and Republican of Dona Ana country concluded each to have a convention and a precession at La Mesilla, on yesterday, and while the processions were marching through the streets, an altercation took place between a man called Kelly (a typo in the Borderer’s office and formerly a rebel soldier from Tennessee) and Judge John Lemon, and after a few words Mr. Kelly struck the Judge over the head, fracturing his skull, and upon the instant of Kelly striking the Judge, a Mexican (the brother-in-law of F. Berkner, Post Master of Mesilla) shot Kelly through the heart, and before he, Kelly, had fairly fallen, the Mexican was shot by somebody else and a regular stampede ensued thereafter, by many to their homes and by a large number into and on top of the houses in the vicinity of the fight, from whence they opened fire on every one passing, or in sight.