The April release of Early American Imprints, Series II: Supplement 2 from the American Antiquarian Society includes an extremely rare speller “for the improvement of youth,” an official record of the deaths and their causes in New York City in the early years of the 19th century, and an instruction book on reading for young children. 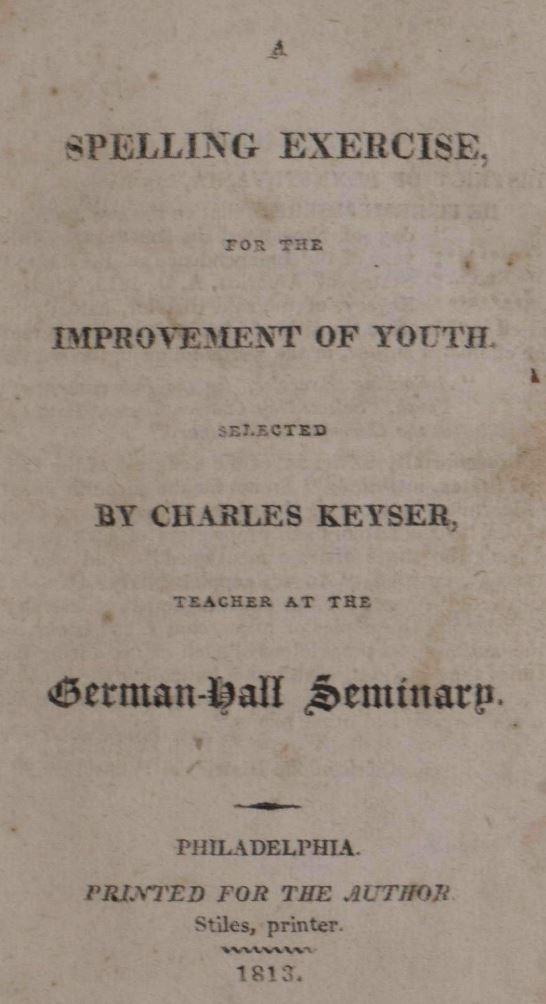 A Spelling Exercise, for the Improvement of Youth (1813)

Selected by Charles Keyser, teacher at the German-Hall Seminary

In his preface, Keyser describes the problem that his 19 years of teaching have revealed to him. Of his students, he writes:

…I have found, by experience, that too many are deficient in the rudiments of a good English education, particularly in SPELLING. Very many are unable, at the first trial, either to spell or define words of one, two, or three syllables, which are sounded alike, but differently spelled, as: ware, merchandize; wear, to use; were, plural of was; and where, in that place: wherefore, to facilitate the scholar’s improvement in spelling, and for my own pleasure in teaching, I have collected nearly all the words of this class and arranged them alphabetically in lessons, containing fourteen or fifteen words each. 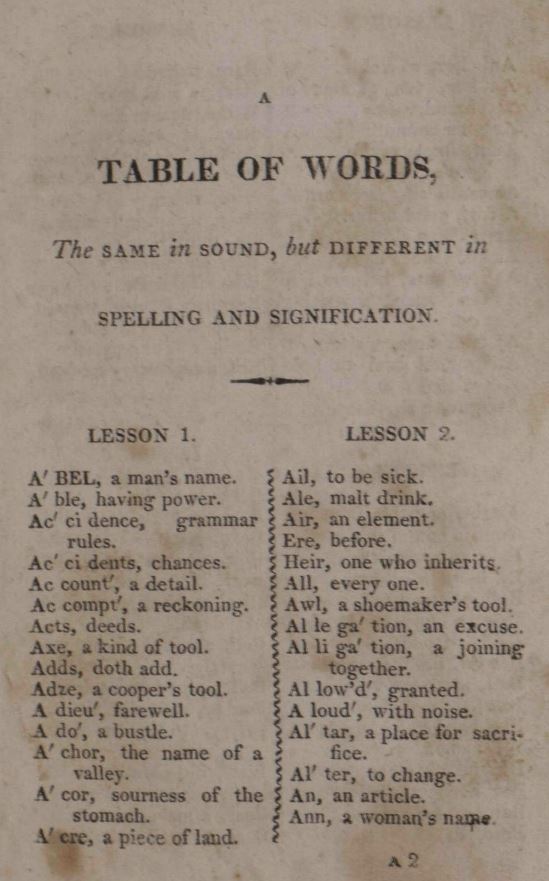 Upon reading his groupings of these challenging words, the contemporary reader will discover words which were common in 1813 but rarely used now. An example is “accompt” which the Collins online dictionary describes as archaic and as both a noun and a verb meaning “an account” and “to account.” Collins’ graph shows that recorded usage of “accompt” peaked in 1768.

“Accompt” is soon followed by “acor” which the author defines as “sourness of the stomach.” It is difficult to find any sources that offer a definition other than Latin/English dictionaries which offer “bitter or tart flavor; sourness; tart/sour substance.”

To this day there are two common pronunciations for the word “aunt” that prevail and are often a regional distinction. For Keyser, the correct pronunciation is made clear as he pairs the word with “ant, an emmet.” He offers the pairing of “bacon” and “baken” which Wiktionary defines as “From Middle English baken, from Old English bacen, gebaken, past participle of bacan ('to bake').”

“Bean, a kind of pulse” is paired with “Been, was at a place.” In this instance, “pulse” is defined by oxforddictionaries.com as “The edible seed of a leguminous plant, for example a chickpea, lentil, or bean.” “Borne, supported” and “bourn, a limit” are made distinctive. Merriam-Webster offers many synonyms, none of which even suggests “a limit” as a possibility. One more pairing from the B section is “But, a disjunctive conjunction” with “Butt, two hogsheads.” It does not appear that popular dictionaries offer this definition. “Seel, to close one’s eyes” is now archaic. And so it goes.

Those who delight in language will find pleasure in examining this imprint. Only a few examples have been offered here and all from the first few pages. 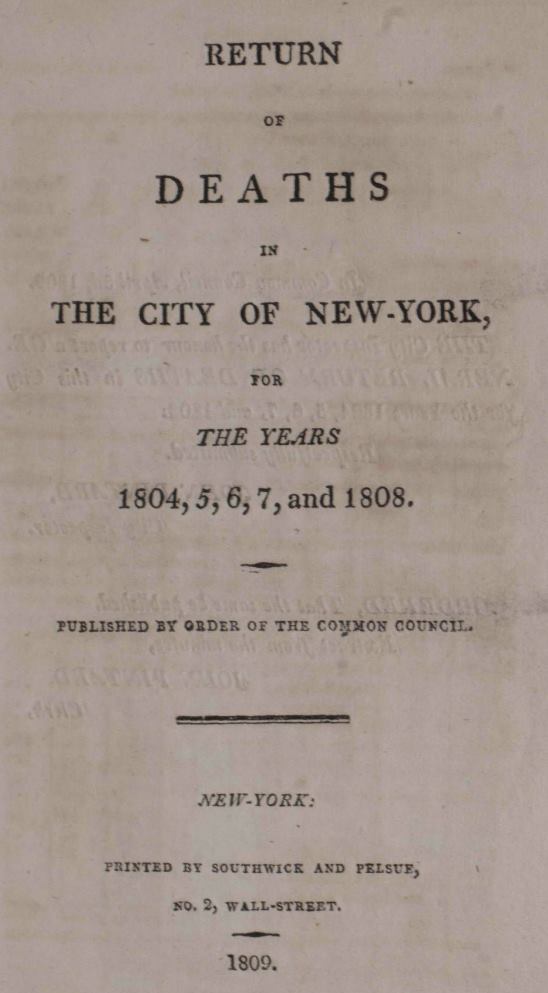 This brief imprint from the City Inspector, laid out in charts, provides insights into the health status of early 19th-century New Yorkers. The statistics are divided among Men, Women, Boys, and Girls. Further, they are assorted by age ranges beginning with “Of the age of one year and under” culminating with “one hundred and upwards.” 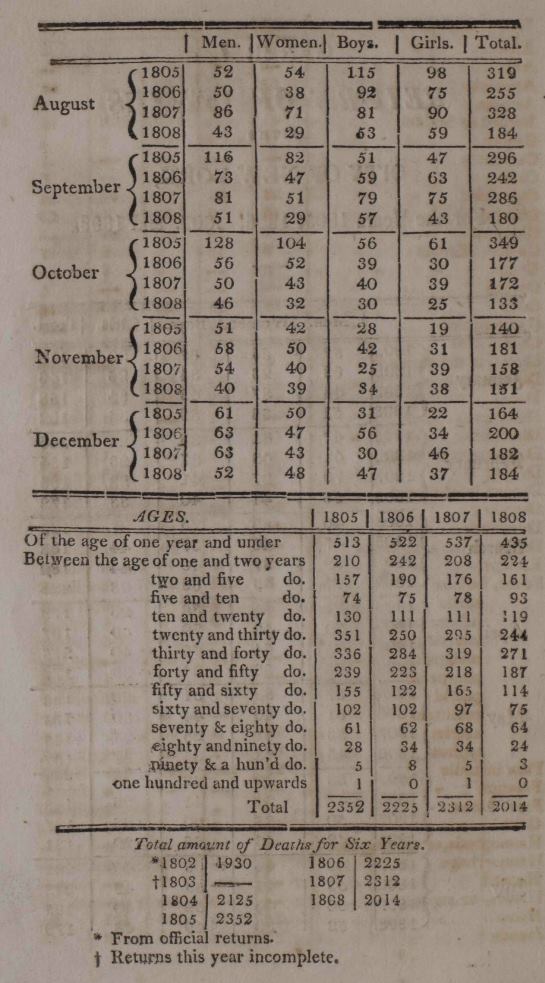 The statistics should be examined bearing in mind that in 1810 the population of New York City was 96,000. In the four years here summarized, the largest number of deaths each year were among infants under age one. Only two deaths occurred among those whose age was 100 or more. The annual number of deaths was fairly consistent, ranging from 2,014 to 2,352.

The causes of death are also broken down. 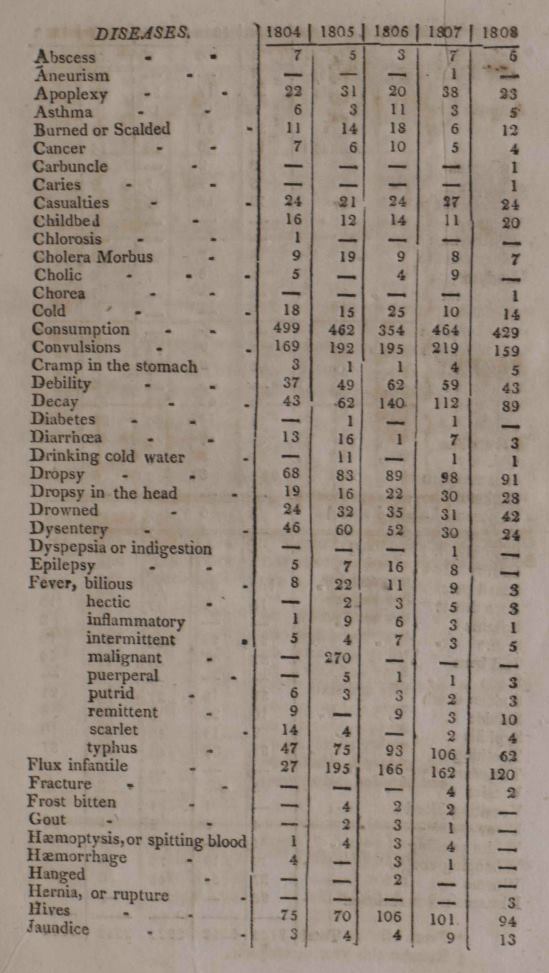 By far, the greatest number were caused by “Consumption,” although in the appended “Remarks” the following advisory is offered:

Consumption. The amount of deaths under this head must be accepted with considerable allowance; as there is just reason to conclude that many are reported having died of consumption, from the difficulty of ascertaining the precise malady. With every abatement, however, it is a very alarming disease, incidental in some degree to our latitude, but undoubtedly aggravated by the imprudent adoption of Fashions in Dress adapted to more genial climes.

In addition to listing diseases which are familiar if less fatal now, such as scarlet and typhoid fevers, jaundice, small pox, and syphilis, there are other categories that are unfamiliar. These include apoplexy, carbuncle, drinking cold water, dropsy and dropsy in the head, locked jaw, mortification, sprue [celiac disease], and St. Anthony’s fire [ergot poisoning.] There were a total of 13 infanticides. In the “Remarks,” the author avers:

Infanticide. In a country, where so little pretext is afforded for the commission of this horrid and unnatural crime, it is to be lamented that any instances should occur. 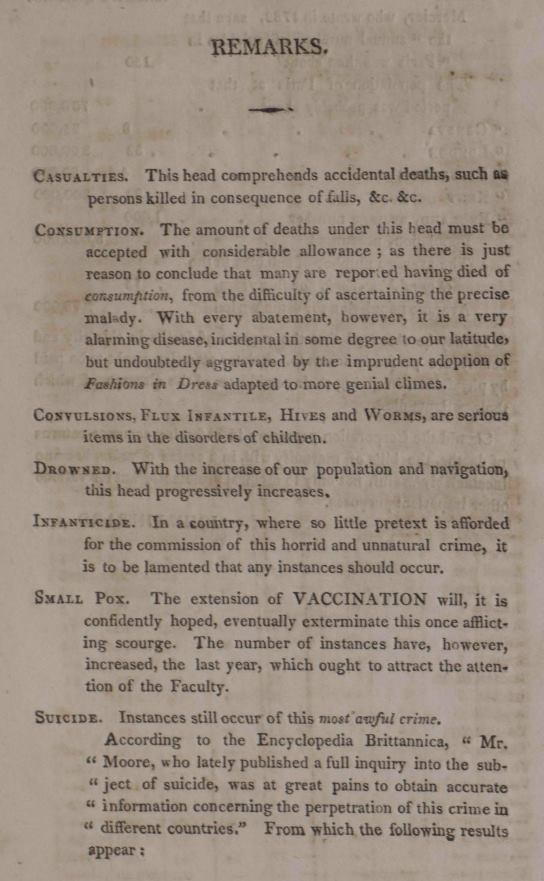 It may be observed that the reports of deaths in this city and county are perfectly accurate. Stricter attention ought to be paid by physicians, in giving their certificates of the diseases, of which their patients died.

Should the Corporation persevere in enforcing accurate returns of deaths, the bills of mortality, in a series of years, become incalculably useful, not only to medical professors, but for various other important purposes. 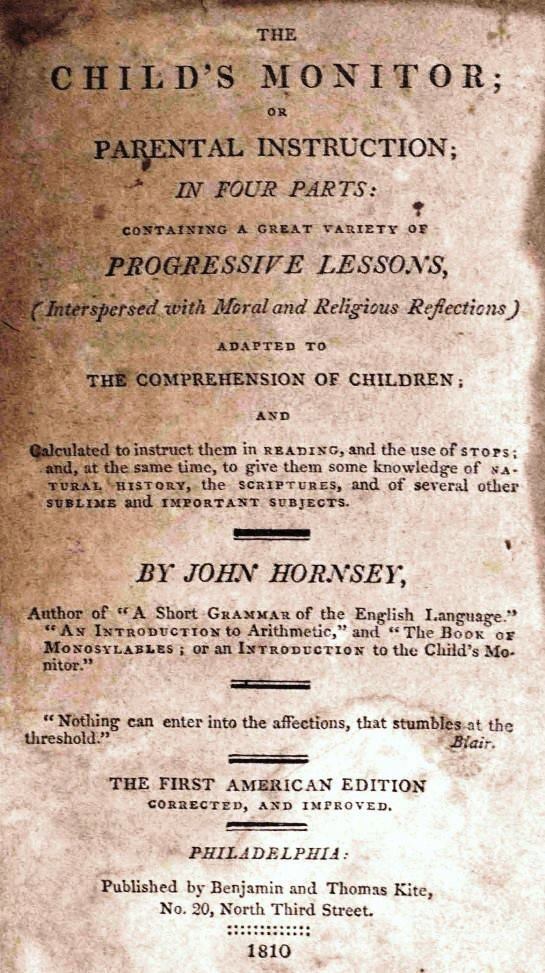 The Child’s Monitor; or Parental Instruction: in Four Parts: Containing a Great Variety of Progressive Lessons, (Interspersed with Moral and Religious Reflections) Adapted to the Comprehension of Children; and Calculated to Instruct Them in Reading, and the Use of Stops; and, at the same time, to give them some Knowledge of Natural History, the Scriptures, and of several other Sublime and Important Subjects (1810)

This imprint begins with an “Advertisement” from the editors of this “First American Edition”:

THOSE who have undertaken to instruct children in the first rudiments of education have, with much reason, complained of our elementary books. Great improvement has undoubtedly been made in them within a few years; but there still remains much to be done, in order to render the path to learning sufficiently smooth to young beginners. In compiling reading-books due care has not been taken to choose subjects calculated to interest them nor to treat them in a style adapted to their capacities. Aware of these errors, the author of the following work has judicially avoided them. His subjects are interesting and instructive, and his style plain and intelligible. He is intitled [sic] to great credit for having produced a work so suitable to succeed those books which may have been put first into the hands of children.

Despite these claims, this book is not unlike many primers of this era. However, it does have some interesting instructions for the children.

Now, take the book, and I will hear you read. If you wish to read well, you must, at first, take great time; read with a soft voice; speak loud enough to be heard; and stop to breathe at the marks, which you see between the words. As you must think it worth your while to learn to read, I hope you will strive to read well.

Hornsey’s first lesson can stand as an example for his subsequent examples in tone and style.

CHILDREN take off your hats. Hats are not to be worn in the house. Hold up your heads. Keep your arms off the table, and mind what is said to you. Lay the knife down, and take up your books, and come to read. Why do you read through your nose? It is a bad habit; leave it off; open your mouth, and read aloud.

He relates the tale of Puss which concludes:

See, how still she sits! when will you sit as still as she sits? Puss sits too near the fire, and so do you. Puss should go catch mice; and you should keep off the fire, lest it should catch hold of your clothes, and you should be burnt. Many children have come to an untimely end by their clothes taking fire. 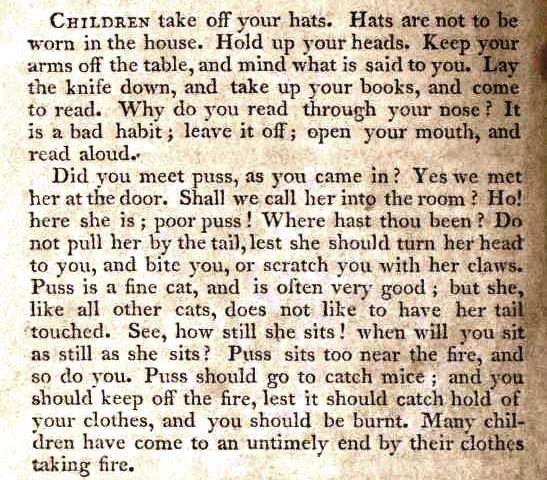 Concerned that “all work, and no play, might make you dull boys,” the author includes a section entitled “Instructions,—Play-Things.”

If you read well, and take your breakfast, like good children, you shall have peg-tops and cords to spin them with. Here are also a nice cart, a spade, a rake, a hoe, a gig, a ball, and a kite, which shall be yours, if you strive to read well. 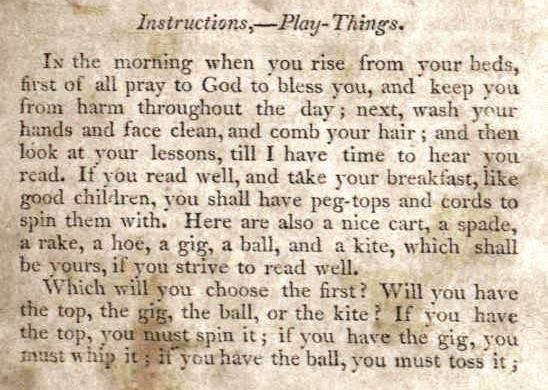 As we have already seen, he does not spare his child reader from the brutal facts of life. In a section on quadrupeds, he relates a sad tale about an abused ass which is put to a task to which he is unequal. When he stumbles and breaks his knees. His master “Like a sour, crabbed man” beats the creature to death.

What do you think, of such treatment as this? Would it not give pain, to any feeling heart, to see a poor, dumb beast put to more than it has strength to do? and, when it can do no more, to be beaten to death by the hands of its hard master? With what disapprobation must the Creator behold the creatures, which he has made for the use of man so wantonly slain by those into whose hands they have fallen! 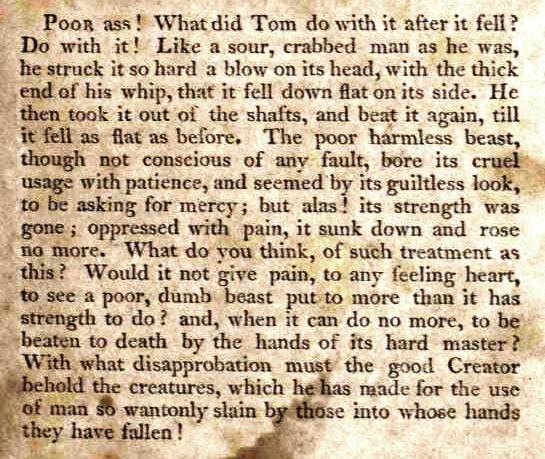 Here is one more of myriad warnings concerning livestock:

It may not be amiss to inform you, that many bulls go mad before they are four years old; that a bull, when full grown, is a large, strong beast; and that, while he remains gentle, he looks fierce and awful; but when mad, his bellow is frightful, and his look, terrible.

If he were loose, and saw a person in the same field, or in a field near it, he would run towards him with almost the swiftness of a horse, bellowing and tearing up the ground with his fore feet; and if the object of his fury should either be overcome with fear, or out-run by his vicious pursuer, the bull would gore him to death with his horns, and then trample him under his feet. Such dangers as these, I trust, you will always take great care to shun.

These excerpts are but a very small portion of the lessons offered. It appears that the diligent child to whom Hornsey addresses himself must have, indeed, as promised, learned a great deal by learning to read.