‘These Traitors and Villains in This Senate’: Highlights from Afro-Americana Imprints, 1535-1922

The October release of Afro-Americana Imprints, 1535-1922: From the Library Company of Philadelphia includes Civil War era works such as a speech from the floor of the House on the subject of slavery and pamphlets from the Loyal Publication Society focused on a faction of the Democratic Party, the Copperheads. 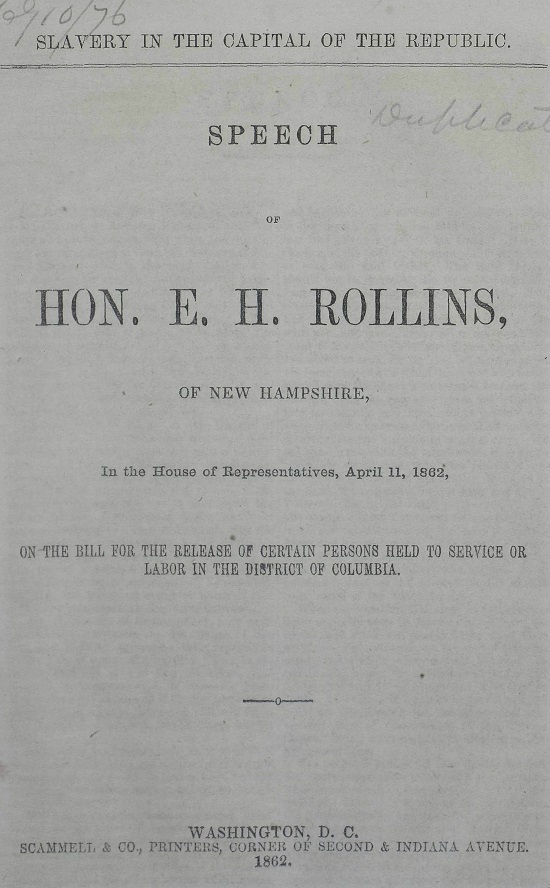 Slavery in the Capital of the Republic (1862)

Edward Henry Rollins (1824-1889) served in the New Hampshire House of Representatives prior to the Civil War, in the U.S. House during the war, and in the U.S. Senate after the war. On April 11, 1862, arguing in favor of “the bill for the release of certain persons held to service or labor in the District of Columbia,” he declared:

The historian who writes the deeds of nations for future generations to read, will not fail to record the truth that slavery put itself front to front with liberty, in the great rebellion of the nineteenth century. Let it be our care that men shall not blush to read that we sought to shun the real foe, and flesh our swords in some spectral horror.

How stand the facts? Nearly all the slave States joined bodily in the rebellion, and there are none of them but in some measure gave, and are still giving aid to treason. It is only by the timely presence of northern soldiers that any slave State is kept in the Union, with perhaps the exception of Delaware. Maryland begged that our hurrying hosts might not pass through its chief city, and I know not for what purpose the thousands of troops are still kept upon her soil except to protect her from herself. Kentucky, through her governor, who still remains her chief executive officer, defiantly refused to give aid to the President when he called. Missouri was overrun by her own men, and now lies desolate; and when she recovers, and magnificent fields wave once more with golden harvests of wheat and plumed ranks of corn, her loyal people will remember that she was redeemed by the valor of soldiers from the free States….Wherever slavery predominates, there the States are all absorbed in this iniquitous work. Where the proportion of slave population is small, there do we find staunch friends of the Union; and no less does the gratitude of the nation flow out to them; ay more, that they were exposed to the terrible scourge of intestine war and bloody-minded treason in their own midst. But let them not lessen that sense of grateful feelings by still hugging to their bosoms the unrelenting foe of our common country; and I appeal to them that, now the capital of our nation is still possessed by us, they help to rid it of the blight that tainted nearly all the ruling population with treason. 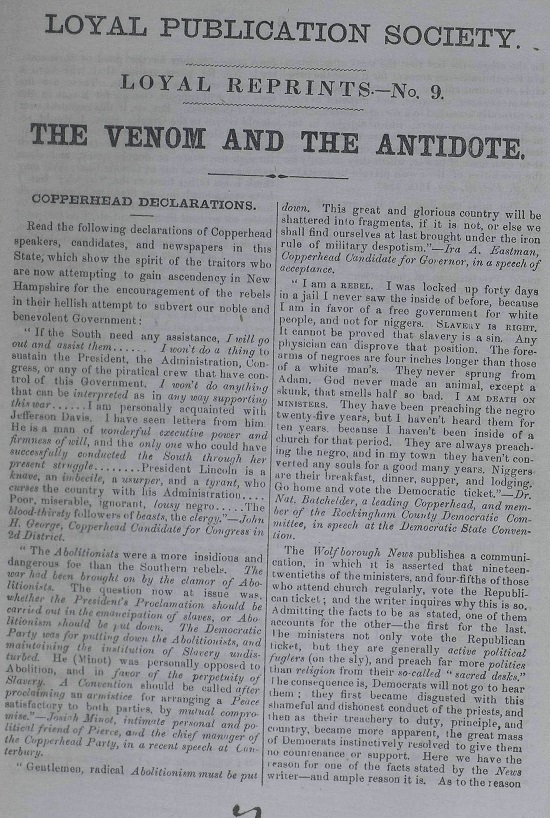 By the Loyal Publication Society

The Loyal Publication Society was founded in 1863 to disseminate pro-Union news articles and editorials in hopes of fortifying public support of the war effort. This edition begins with “declarations of Copperhead speakers, candidates, and newspapers in this State, which show the spirit of the traitors who are now attempting to gain ascendency in New Hampshire for the encouragement of the rebels in their hellish attempt to subvert our noble and benevolent Government” as an example of the Copperheads’ venom.

“I am a REBEL. I was locked up for forty days in a jail I never saw the inside of before, because I am in favor of a free government for white people, and not for niggers. SLAVERY IS RIGHT. It cannot be proved that slavery is a sin. Any physician can disprove that position. The forearms of negroes are four inches longer than those of a white man’s. They never sprung from Adam. God never made an animal, except a skunk, that smells half so bad. I AM DEATH ON MINISTERS. They have been preaching the negro twenty-five years, but I haven’t heard them for ten years because I haven’t been inside of a church for that period. They are always preaching the negro, and in my town they haven’t converted any souls for a good many years. Niggers are their breakfast, dinner, supper, and lodging. Go home and vote the Democrat ticket.”—Dr. Nat. Batchelder, a leading Copperhead, and member of the Rockingham County Democratic Committee, in a speech at the Democratic State Convention.

The society thwarts the vitriol of the Copperheads by printing responses, or antidotes, by loyal Unionists.

“…I am going to write a word about the copperhead. When I read of the copperheads in the Granite State,—the peace party,—when Jeff. says he would not make peace on any conditions whatever with the ‘Yankees,’ it makes the blood boil within my veins, to think we came out here to fight for the Government, while they at home are fighting against the Government, and at the same time wishing us defeated and that we never should return; and when we are enduring the hardships of a soldier, and exposing ourselves to sickness and death, they at home are making political capital out of it….But, sir, if this regiment ever should return to the Granite State, I would recommend that when they come to the New Hampshire line, they charge bayonets and march through the State at double quick and clean every copperhead out to Canada line. You may think I am rather hard on the “secesh;” but I have seen enough in your State, as I see enough here to convince me that the world would be better off without them. And, sir, I do believe if they would burn them at the stake (the rope, powder, and ball would be too good for their black infamy), I say if they would burn them, it would be the means of doing more good to put down this rebellion, than it would to raise six hundred thousand more of the best troops that ever trod the soil. Let every man shoulder his gun to fight for the old flag; let us arm the negroes; and use every means to put down the serpent and damned by the man that acts in concert with Jeff. Davis & Co.” 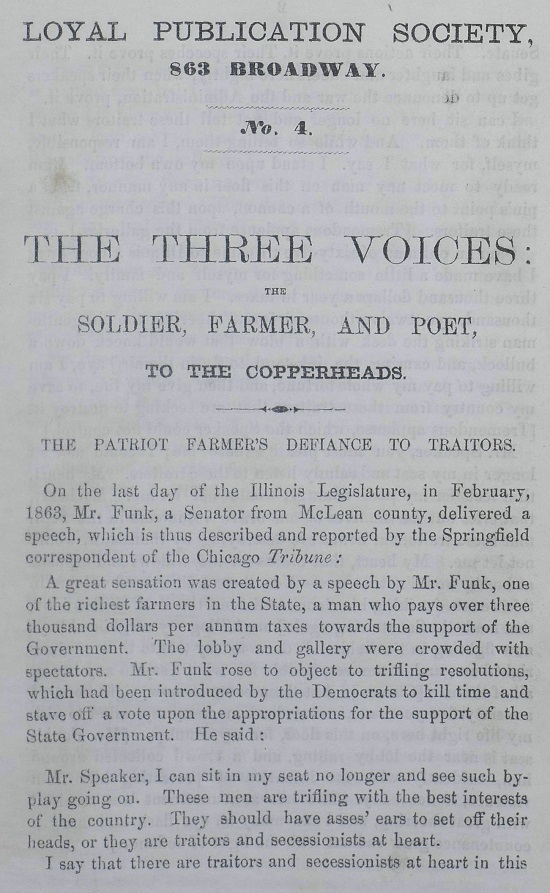 By the Loyal Publication Society

In this pamphlet the Loyal Publication Society directs messages to the Copperheads through three voices, the soldier, farmer, and poet. The first group is represented by the oratory of state senator and wealthy farmer, Isaac Funk. In the Illinois Legislature, in February, 1863, Funk rose, saying:

Mr. Speaker, I can sit in my seat no longer and see such byplay going on. These men are trifling with the best interests of the country. They should have asses’ ears to set off their heads, or they are traitors and secessionists at heart.

I say that there are traitors and secessionists at heart in this Senate. Their actions prove it. Their speeches prove it. Their gibes and laughter and cheers here nightly, when their speakers get up to denounce the war and the Administration, prove it.

I can sit here no longer and not tell these traitors what I think of them. And while so telling them, I am responsible, myself, for what I say….I am ready to meet any man on this floor in any manner from a pin’s point to the mouth of a cannon, upon this charge against these traitors.

Cheered on by his audience, Funk is unabating in his charges against the Copperheads in the Illinois Senate:

Mr. Speaker, these traitor on this floor should be provided with hempen collars. They deserve them. They deserve hanging, I say, the country would be the better off swinging them up. I go for hanging them, and I dare to tell them so, right here to their traitorous faces. Traitors should be hung. It would be the salvation of the country to hang them….I have stood it long enough.  I will stand it no more. I denounce these men and their aiders and abettors as rank traitors and secessionists. Hell itself could not spew out a more traitorous crew than some of the men that disgrace this Legislature, this State, and this country. For myself, I protest against and denounce their treasonable acts. I have voted against their measures; I will do so to the end. I will denounce them as long as God gives me breathe; and I am ready to meet the traitors themselves, here or any where, and fight them to the death.

For more information about Afro-Americana Imprints, including pricing for your institution, please contact Readex Marketing.