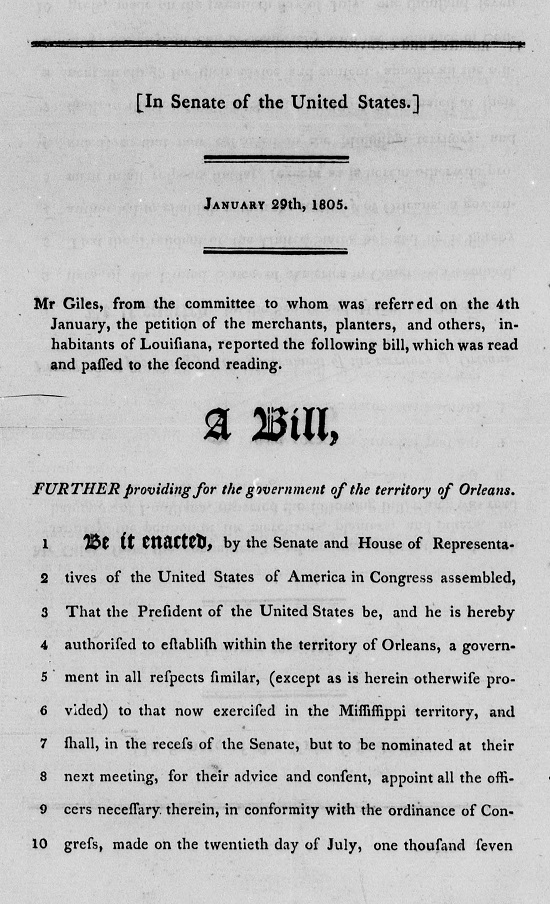 SEC. 7. And be it further enacted, That whenever it shall be ascertained by an actual census or enumeration of the habitants of the territory of Orleans, taken by proper authority, that the number of free inhabitants included therein shall amount to [at least] 60 thousand [souls, which shall be determined by adding the whole number of free persons, including those bound to service for a term of years, and excluding Indians not taxed, three-fifths of all other persons, the inhabitants of the said territory, upon application to Congress for that purpose, and upon producing satisfactory proof that the number of souls included therein, ascertained as aforesaid, does actually amount to at least       thousand] they shall thereupon be authorized to form for themselves a constitution and state government, and be admitted into the Union upon the footing of the original states… 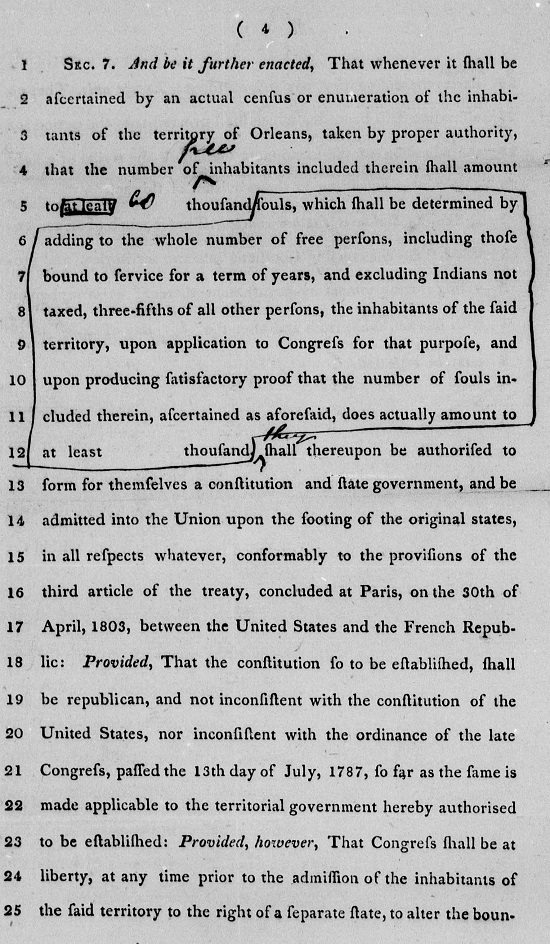 William C.C. Claiborne (1775-1817) supervised the transfer of Louisiana to U.S. jurisdiction following the Louisiana Purchase and then served as Governor of the Territory of Orleans from 1804 to 1812. Claiborne’s letter to Julien de Lallande Poydras, a delegate of the territory to the U.S. House of Representatives, of June 4, 1809 begins:

I have nothing new to communicate; - near one thousand people from Cuba have reached this city…some of those arrived are in great distress; but the inhabitants of New Orleans are very benevolent, and have contributed liberally to the relief of those unfortunate strangers. The negros are still detained on board the vessels in which they came. I should myself, be well pleased, if Congress would relax the law forbidding the importation of slaves, as relates to these miserable exiles. I witness their distress, and would most readily alleviate it, if in my powers. 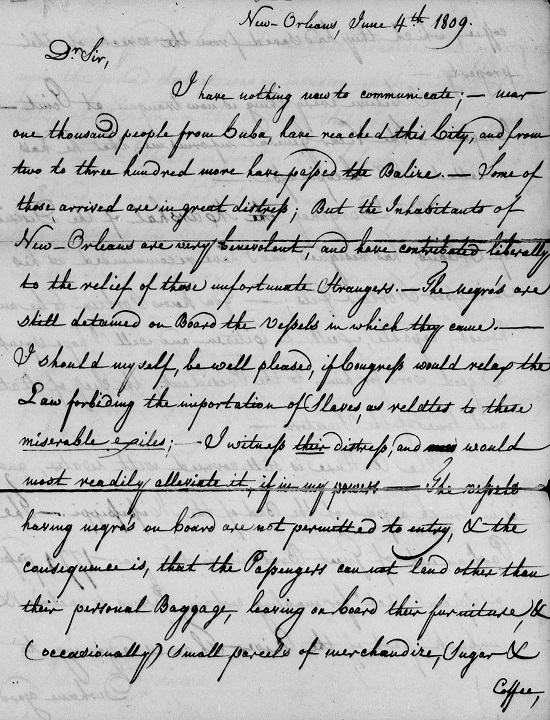 Also included in this release are a number of legislative reports relating to various groups of peoples over a range of territories including Arkansas, Colorado, and Dakota.

The “Act Making an Appropriation towards the Extinguishment of the Quaupau Title to Lands in the Territory of Arkansas” is an impressively concise eight lines given the breadth of the authorization:

…that a sum not exceeding seven thousand five hundred dollars be, and the same is hereby, appropriated, to be paid out of any money in the Treasury, not otherwise appropriated, to enable the President of the United States to negotiate a treaty with the Quaupau Indians, for the extinguishment of their title to lands in the Territory of Arkansas. 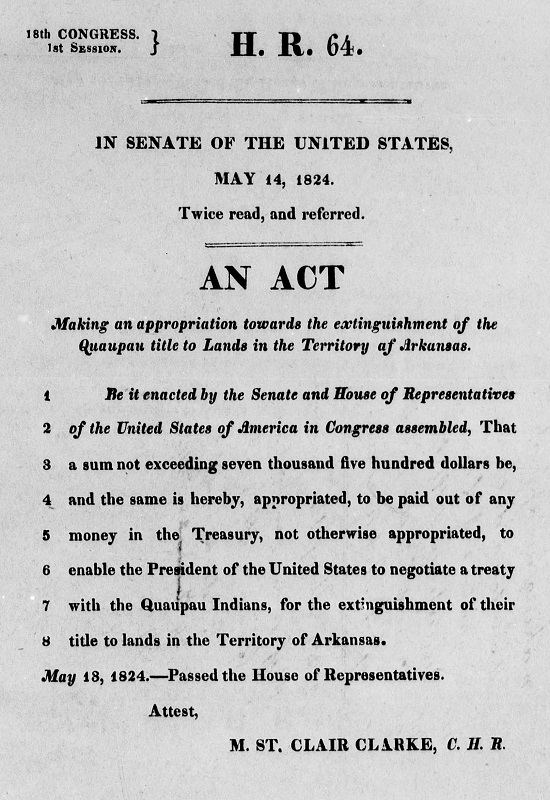 H.R. 515 authorizes the president to appoint an agent, at an annual salary of fifteen hundred dollars, for the “Grand River and Wintah bands of Indians, in the Territory of Colorado…” 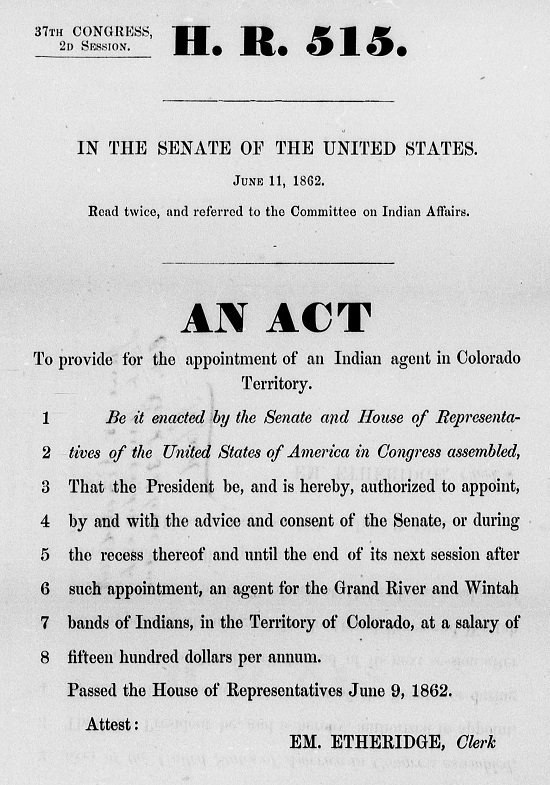 When treaties and agents were unsuccessful at reaching the desired results bills such as H.R. 420 provided, as the title makes clear, an alternative approach. The bill authorizes and directs the Secretary of War

…to issue, upon the requisition of the governor of Dakota Territory, such amount of ordnance and ordnance stores as may be necessary to arm the inhabitants of said Territory who may organize for defence against hostile Indians, not exceeding one thousand stand of small-arms and one hundred thousand rounds of ammunition, to be charged against the quota due, or to become due, to the Territory under the laws for arming and equipping the militia. 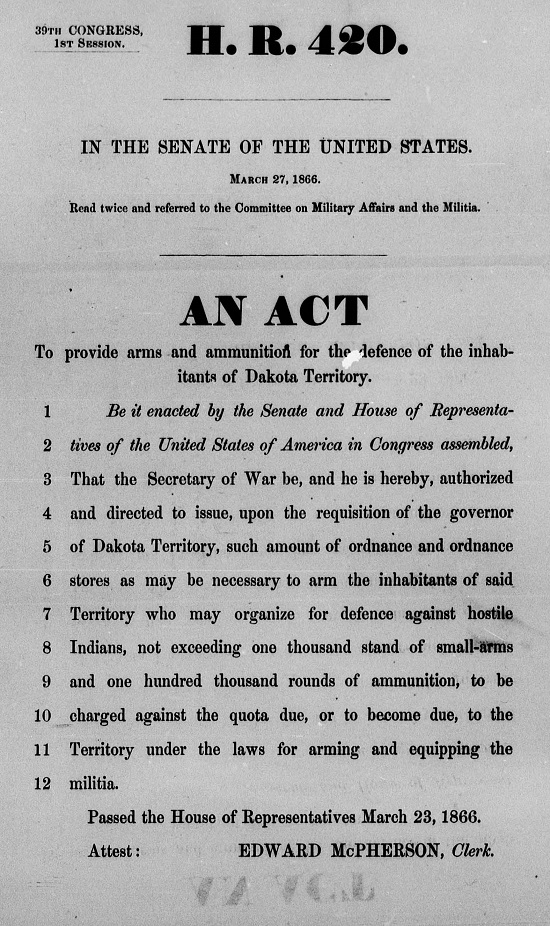 To learn more about making Territorial Papers of the United States available at your institution, please contact Readex Marketing.