‘Vegetables for the well men’: Highlights from The American Civil War Collection

The United States Sanitary Commission (USSC) was created by Congress in 1861 as a private agency to care for sick and wounded Union troops, but it also provided supplies and creature comforts to many other U.S. Army soldiers. Women assumed a prominent role in its efforts, and the USSC raised the equivalent of almost 400 million dollars today. The current release of The American Civil War Collection, 1860-1922: From the American Antiquarian Society includes three imprints that focus on the Commission’s work and related Sanitary Fairs. 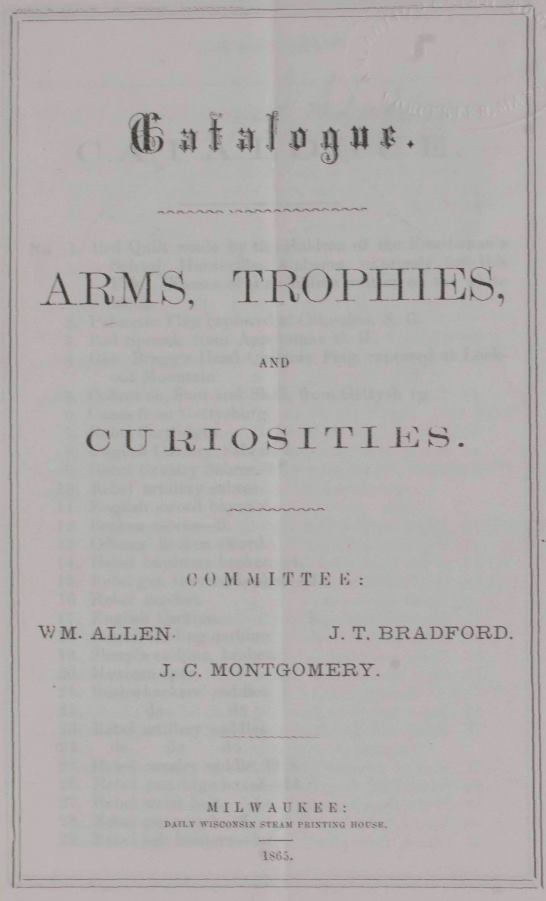 During the course of the Civil War, volunteers staged numerous Sanitary Fairs throughout the North. These ambitious and elaborate events were instrumental in raising money for the USSC. This imprint details war-related items on exhibition at a Chicago fair. The extensive catalogue includes these entries:

Bed Quilt made by the children of the Freedsman’s (sic) School, Huntsville Alabama, expressly for this Fair. Names of the children written on the white block.

Gourd dish, from a plantation in South Carolina.

Rebel love letter and photograph, from mail captured by the 21st regiment.

Bullet which passed entirely through the body of J.A. Morean, the donor, at the battle of Chancelsorsville (sic).

Piece of oak under which Grant and Pemberton signed their treaty.

Revolver that was fired at Sherman’s “bummers” as they entered Raleigh, North Carolina, the man was hung twenty minutes after firing.

Slave whip from plantation of the rebel Gen. Pillow.

Pressed vegetables, a specimen of food issued to our soldiers.

Piece of bread from Libby Prison.

Chips from door of Libby Prison.

Pieces of marble from the grave of Martha Washington.

Basket and tin dish picked up near where Lee stood when he surrendered, supposed to be his lunch basket, strong odor of hard tack and pickles.

Bullet taken from John Brown’s pocket a few moments before his execution.

Colors of the Treasury regiment. Regimental color which draped the center curtain of the President’s box at Ford’s theatre on the night of the assassination of President Lincoln, April 14, 1865, and torn by Booth’s spur when he leaped upon the stage, cutting it in three places, and tearing off a portion of the fringe.

This is only a small sample of the listings.  There 318 items in all, including many that do not seem to be explicitly war-related but are often compelling. 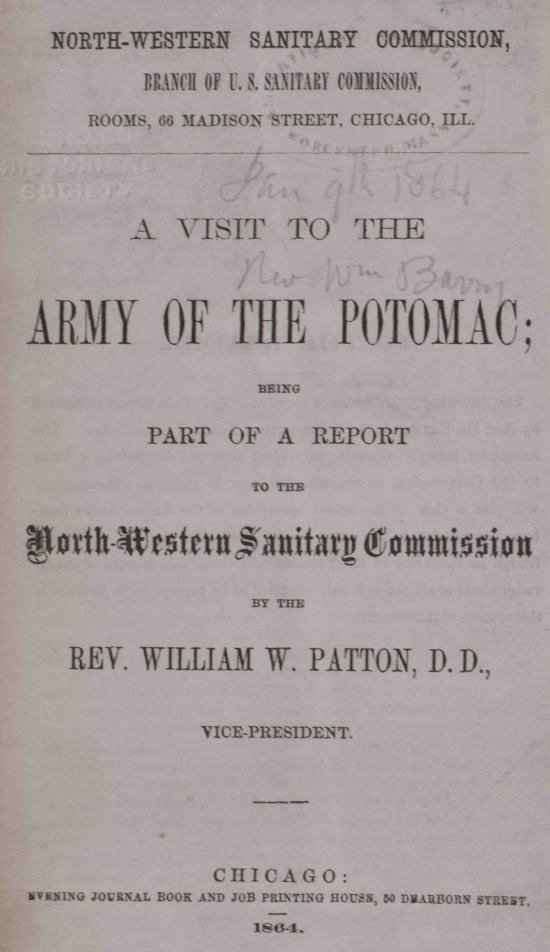 A Visit to the Army of the Potomac: Being Part of a Report to the North-Western Sanitary Commission by the Rev. William W. Patton, D.D., vice-president (1864)

In 1864 Rev. William Patton travelled from Chicago to the east coast because his regional sanitary commission had a compelling interest in the conditions and well-being of the many soldiers from the northwest United States. He begins his report addressed to the commission:

It has been my privilege, at your request, to make repeat visits to the Western Army, on the Cumberland, the Tennessee, and Mississippi, accounts of which have been submitted in various forms to the patriotic and benevolent public. Having just returned from a similar tour of observation in the Army of the Potomac, in front of Petersburg, I submit the following report:

He travels first to Washington in order to learn how the system of “army relief as controlled from that central point” functions. He is impressed with what he observes. He visits the Soldiers’ Lodge and the Soldiers’ Home, known today as the Armed Forces Retirement Home.

The Soldiers’ Lodge entertains with meals and beds those who are detained, by necessary business, for a few hours or days, while the Soldiers’ Home receives sick, furloughed or discharged men, who are too unwell to proceed further, and there they are tenderly nursed till able to resume their journey. Thither they are sent, for temporary accommodation, mothers and wives who often come to Washington in search of sons and husbands, with insufficient means to meet their expenses. It is with tears of grateful surprise that, in the midst of their distress, they are taken by the agents of that Sanitary Commission…to a quiet shelter where they are gratuitously fed and lodged until able to return to their homes with the loved one whom they came to find.

Patton travels on to City Point in Virginia and beyond.  One section in his report is titled “Vegetables for the well men.”

In addition to the supplies furnished to the field-hospitals at the front, the Sanitary Commission has done great work in giving the men at work in the trenches rations of vegetables thus preserving their health and keeping up their spirits. The following items of the distribution made from June 18th to July 29th…

Next, we learn about the General Hospital near the Gettysburg Battlefield which…

…consists of large tents arranged according to the respective divisions of the army, and resembles, in its streets and alleys, a canvas city, covering forty acres of ground. Order and neatness are the grand characteristics; and the soldiers have brought evergreens and made numerous shady walks….This general hospital receives the patients from all the field-hospitals in the camps. Those are transferred to it who are likely to be ill for any length of time. On my first visit, before the battle, there were about 4,500 patients.

The author is so impressed with the hospital that he declares it “can scarcely be improved.”

And he lauds the many acts of the Commission in support of the soldiers.

Nor is it easy to mention all the particulars in which the soldiers are aided by the Commission, both in health and sickness, as in furnishing meals and lodging at the soldiers’ rooms, obtaining their back pay and lost papers, entertaining their relatives who come to visit them, sending home their money, watches, and other valuables, furnishing paper, envelopes and ink for their correspondence, and often performing the sad office of forwarding their bodies to their families.

Patton concludes his observation with a brief account of “actual battle work” and the “character of the sanitary agents” whom he describes as “to be men of high moral character and great intelligence.” This imprint documents the dimensions of the war as expressed in the extraordinary work, impressive logistics, and compassion of the thousands of men and women who volunteered to assist the Sanitary Commission. 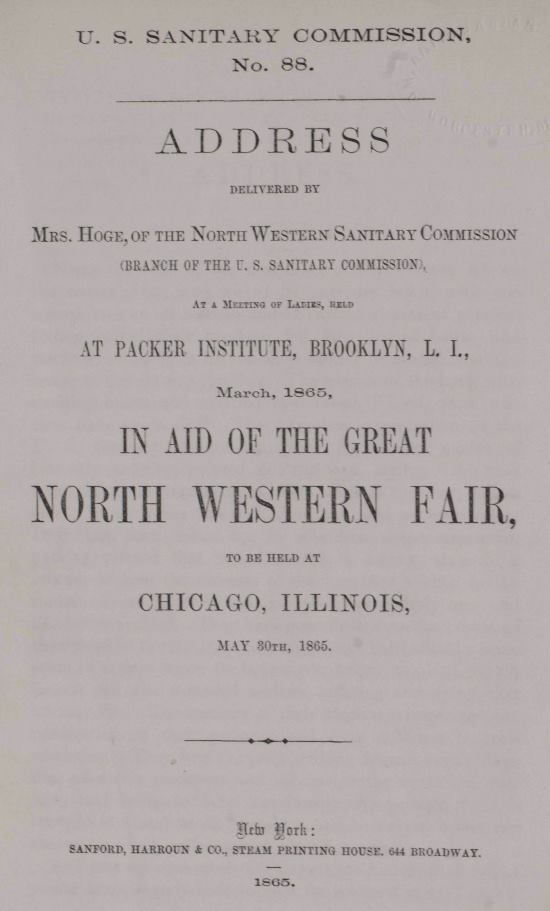 As a volunteer for the North Western Sanitary Commission, Mrs. Hoge visited several of their hospitals and herein describes her experiences.

The first great hospital I visited was Mound City, twelve miles from Cairo. It contained twelve hundred beds, furnished with dainty sheets, and pillows and shirts, from the Sanitary Commission, and ornamented with boughs of fresh apple blossoms, placed there by tender female nurses to refresh the languid frames of their mangled inmates.

She relates her being drawn to one patient whom she describes as boy of 19 summers with bright blue eyes and a dimpled cheek and bandaged like a mummy. They engage in conversation, and he expresses no regrets despite his suffering on the battlefield and the horrors he had witnessed.

As I spoke, a moan, a rare sound in a hospital, fell on my ear. I turned, and saw a French boy quivering with agony and crying for help. Alas! he had been wounded, driven several miles in an ambulance, with his feet projecting, had them frightfully frozen, and the surgeon had just decided the discolored, useless members must be amputate, and the poor boy was begging for the operation.

Two days afterward I visited Jefferson Barracks Hospital. In passing through the wards, I noticed a woman seated beside the cot of a youth, apparently dying. He was insensible to all around; she seemed no less so.

With a sudden start that electrified me, her dry eyes almost starting from the sockets and her voice husky with agony, she said, pointing her attenuated finger at the senseless boy, “he is the last of seven sons—six have died in the army, and the doctor says he must die tonight.”

She recounts other affecting conversations with dying men and offers what solace she can, making promises to communicate with their wives and mothers. She offers some treats.

As I stood at the rude counter, I had beside me a barrel of soft crackers, a bag of onions, a sack of potatoes, a box of herring, a box of pepper, and a box of home-made gingerbread. Green tea, lemons, codfish and white sugar completed the assortment…

…shall I give you an onion? “O, how I’ve longed for that, and wished I had ten cents to buy one from the sutler!” To another I said, “perhaps you would like a lemon?” “A lemon! Just let me look at it and smell one; I believe ‘twould cure me.” “How about some home-made gingerbread?” That always brought the gushing tears, and was, without fail, just like wife or mother’s.

Mrs. Hoge relates more conversations in which the wounded soldiers give extensive accounts of their battle experiences, some of which are excruciating.

While each of these imprints can stand alone, taken as a whole they provide a wide-ranging picture of the work of the Sanitary Commission and the soldiers they served. For more information about The American Civil War Collection, 1860-1922, or to request a trial for your institution, please contact readexmarketing@readex.com.