‘Void of Sincerity’: Highlights from The American Civil War Collection, 1860-1922

The February release of The American Civil War Collection, 1860-1922: From the American Antiquarian Society includes three congressional speeches from 1862 in support of legislation that would allow the confiscation of rebel property and the emancipation of their slaves.

The Constitutionality and Expediency of Confiscation Vindicated 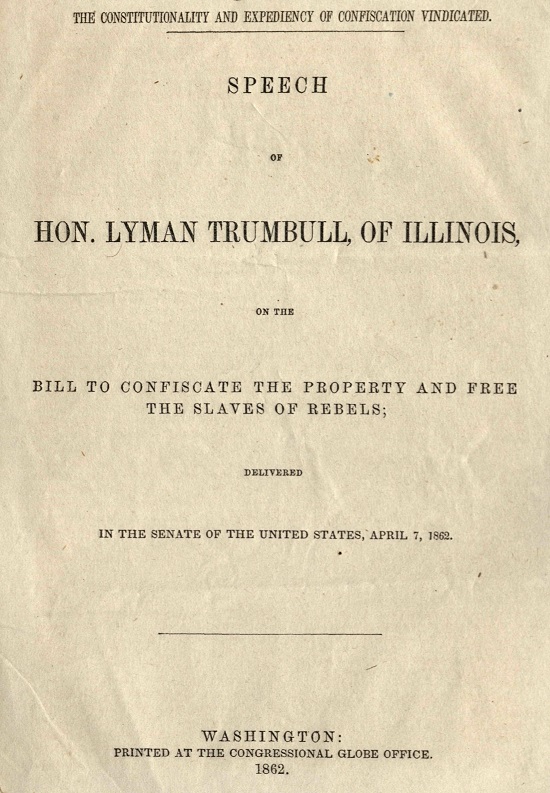 Lyman Trumbull (1813-1896) served as the Illinois Secretary of State, sat on the bench of the Illinois Supreme Court, was elected to the U.S. Senate, and co-wrote the Thirteenth Amendment.

On April 7, 1862, Trumbull offered two minor amendments to a “bill to confiscate the property and free the slaves of rebels” before directing his attention to the opposition’s attacks on the bill.

Mr. President, having made a brief explanation of the main features of the bill under consideration, and the principles on which it was based, at the time it was reported to the Senate, it was not my intention to have said anything more upon it, at all events, unless in closing the debate; but the fierceness with which it has been assailed, and the misrepresentations to which it has been subjected, unintentional of course, make it necessary that I should reply to some of the strictures upon it. Assuming that it was a sweeping measure for the confiscation of all the property in the southern States, the bill has been denounced as unconstitutional and inexpedient with a vehemence and virulence not to have been expected, and surely but illy calculated to promote that calm, deliberate, and candid consideration which the admitted importance of the subject should command.

Trumbull continues, arguing that his opponents are taking political positions in bad faith.

As all the Senators who have spoken against the bill have made the same class of objections, I will reply to them somewhat in detail, though, I must confess, without much hope of gaining their support to the measure, since they are evidently hunting for objections, and would doubtless imagine others, if those already suggested were removed; for in their sympathy for rebels, whom they style brethren, they have vastly magnified the proportions of this bill, as has already been shown; and I can only regard the claim of power of confiscation in the President as a counter proposition to defeat this, for we all know that the President does not pretend to exercise any such power; that he, in fact, has rebuked a distinguished general for attempting to exercise it; and I shall undertake to show before I conclude that he could not constitutionally exercise such a power if he would.

Speech of Hon. E.P. Walton, of Vermont, on the Confiscation of Rebel Property

Delivered in the House of Representatives, May 24, 1862 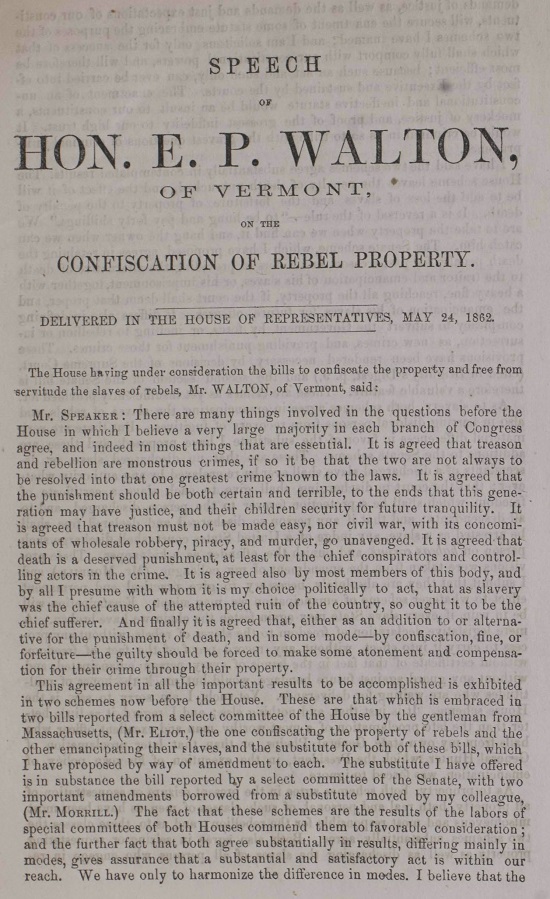 Eliakim Persons Walton (1812-1890) was apprenticed to a printer, studied law and was admitted to the bar, though he did not practice, edited periodicals, and served for twenty years as president of the Editors and Publishers’ Association. He represented Vermont in the Thirty-fifth through Thirty-seventh Congresses and upon returning home he served in the Vermont State Senate, as a trustee of the University of Vermont, and as president of the Vermont Historical Society.

Walton began his remarks acknowledging the wide expanse of common ground held by members in both Houses of Congress.

There are many things involved in the questions before the House in which I believe a very large majority in each branch of Congress agree, and indeed in most things that are essential. It is agreed that treason and rebellion are monstrous crimes, if so it be that the two are not always to be resolved into that one greatest crime known to the laws. It is agreed that the punishment should be both certain and terrible, to the ends that this generation may have justice, and their children security for future tranquility. It is agreed that treason must not be made easy, nor civil war, with its concomitants of wholesale robbery, piracy, and murder, go unavenged. It is agreed that death is a deserved punishment, at least for the chief conspirators and controlling actors in the crime. It is agreed also by most members of this body, and by all I presume with whom it is my choice politically to act, that as slavery was the chief cause of the attempted ruin of the country, so ought it to be the chief sufferer. And finally it is agreed that, either as an addition to or alternative for the punishment of death, and in some mode—by confiscation, fine, or forfeiture—the guilty should be forced to make some atonement and compensation for their crime through their property.

He continues, describing the differing approaches taken by each chamber.

I have said the two schemes agree substantially in contemplated results. The House scheme leaves the penalty of death untouched, and the effect of it will be to add the loss of slaves and the forfeiture of property to the penalty of death. It is a reversal of the rule—“to be hung and pay forty shillings.” We are to take the property when we can find it, and hang the owner when we can catch him. The Senate scheme, which I have proposed, agrees in retaining the death penalty for past treason, and differs in providing the alternative of death to the traitor and emancipation of his slaves, or his imprisonment, together with a heavy fine, reaching all the property, if the court shall deem that proper, and the emancipation of his slaves for future offenses. It differs also in defining conspiracy to subvert the Government by force, or inciting to rebellion or insurrection, as new crimes, and providing punishment for those crimes.

Walton offers a further proposal not only to emancipate the rebels’ slaves but also to ensure their future freedom, criminalize attempts to re-enslave them, and guarantee the freedom of their descendants.

As to slavery, both schemes agree in emancipating the slaves of rebels, and also in barring disloyal persons from recovery of fugitives. But there are very material differences in favor of the substitute I have proposed, and these are additions to the Senate scheme. These are that no discharged slave, or descendants of a discharged slave, shall ever be re-enslaved by any authority whatever; that the court in discharging shall give to each slave a certificate of freedom, which shall be a protection forever to the person discharged, and to all descendants; and that if any person so discharged and declared free shall be arrested as a slave, any judge of the United States court shall discharge such person on habeas corpus, and punish the offender as a kidnapper. 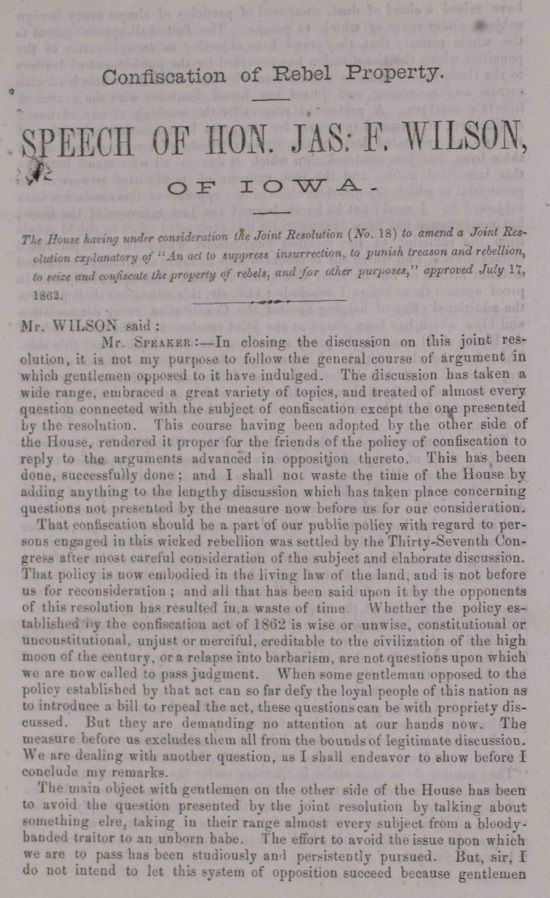 James Falconer Wilson (1828-1895) represented Iowa in the House of Representatives throughout the 1860s. A Radical Republican, he supported civil rights and fought President Andrew Johnson’s attempts to veto the Reconstruction and Civil Rights Acts. Wilson would also serve as a House manager in Johnson’s impeachment trial.

On the floor of the House in 1862, Wilson argued in favor of confiscating the property of the rebels while also recognizing the obstructionist approach taken by his adversaries.

In closing the discussion on this joint resolution, it is not my purpose to follow the general course of argument in which gentlemen opposed to it have indulged. The discussion has taken a wide range, embraced a great variety of topics, and treated of almost every question connected with the subject of confiscation except the one presented by the resolution.

He continues, suggesting the opposition has taken a position outside the parameters of the debate.

That confiscation should be a part of our public policy with regard to persons engaged in this wicked rebellion was settled by the Thirty-Seventh Congress after most careful consideration of the subject and elaborate discussion. That policy is now embodied in the living law of the land, and is not before us for reconsideration; and all that has been said upon it by the opponents of this resolution has resulted in a waste of time.

Unwilling to stray from his theme, Wilson resumes his attack on the resolution’s critics.

The main object with gentlemen on the other side of the House has been to avoid the question presented by the joint resolution by talking about something else, taking in their range almost every subject from a bloody-handed traitor to an unborn babe. The effort to avoid this issue upon which we are to pass has been studiously and persistently pursued. But, sir, I do not intend to let this system of opposition succeed because gentlemen have raised a cloud of dust, composed of particles of almost every foreign subject, under cover of which to escape. The fact shall appear patent to the whole country that they stand here objecting to an application of the penalties which the Constitution has provided for the punishment of traitors to the Government to those wicked men who have filled this whole land with sorrow and mourning, and dotted our broad dominion with the graves of liberty’s martyrs.

Turning his attention from the rebels and back to his fellow House members, Wilson resumes his criticism.

I would not be harsh beyond the just measure of the hour; but my patience has been exhausted by this prolonged effort to shield rebels from the infliction of the merited punishment which their unparalleled crimes invoke, and which the opposers of this measure admit may be inflicted without breach of our national Constitution, which admission shall stand in proof against them before I conclude; and, sir, this admission shall perform the additional office of lodging against the Constitution every denunciation and blow which has been aimed at the joint resolution. The other side of the House shall stand as the party assaulting the Constitution, not this side. This shall be the attitude of the case, or the gentlemen who sit over the way must admit that their denunciations of the joint resolution are void of sincerity, and wholly without justification; and I care not which position they assume, for both are bad enough, and either is discomfiture and defeat to them.