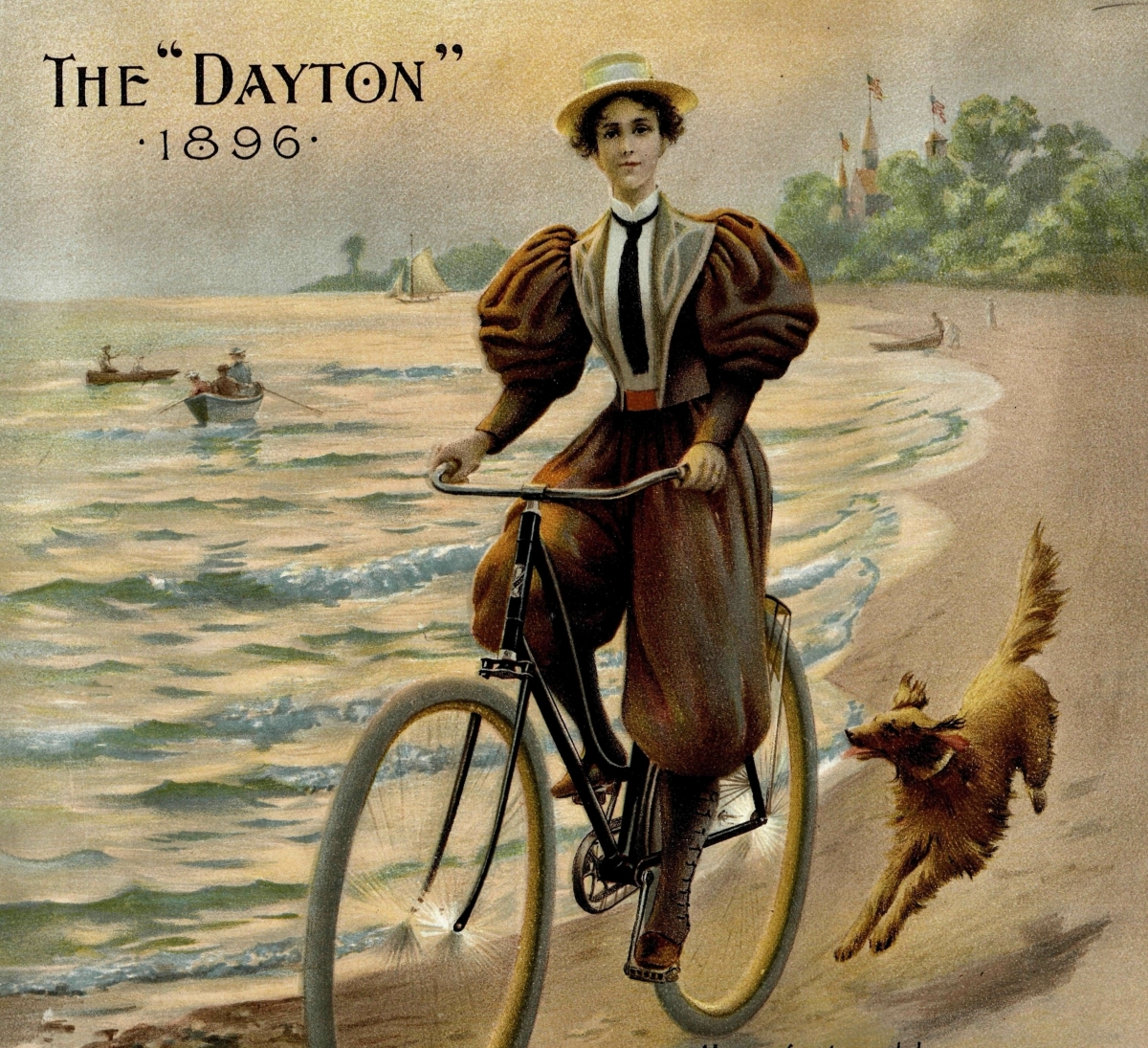 In the late 19th century women began participating in the bicycle craze which men had enjoyed for two decades. This craze did not last long, but for women it was exciting and liberating. It was mostly affluent society women who defied the naysayers and avidly took to the streets on wheels. By 1889 American newspapers were spreading considerable ink on this latest trend.

In January 1889 the New York Tribune reported on a six-day bicycle race in Madison Square Garden for women only. The competition promised

…an exhibition of woman’s endurance that will rival the female walking matches that took place in certain cities seven or eight years ago….Fifteen women will start in the race and a dozen of the required number have already signed contracts to appear. The women will race eight hours a day instead of twenty-four. 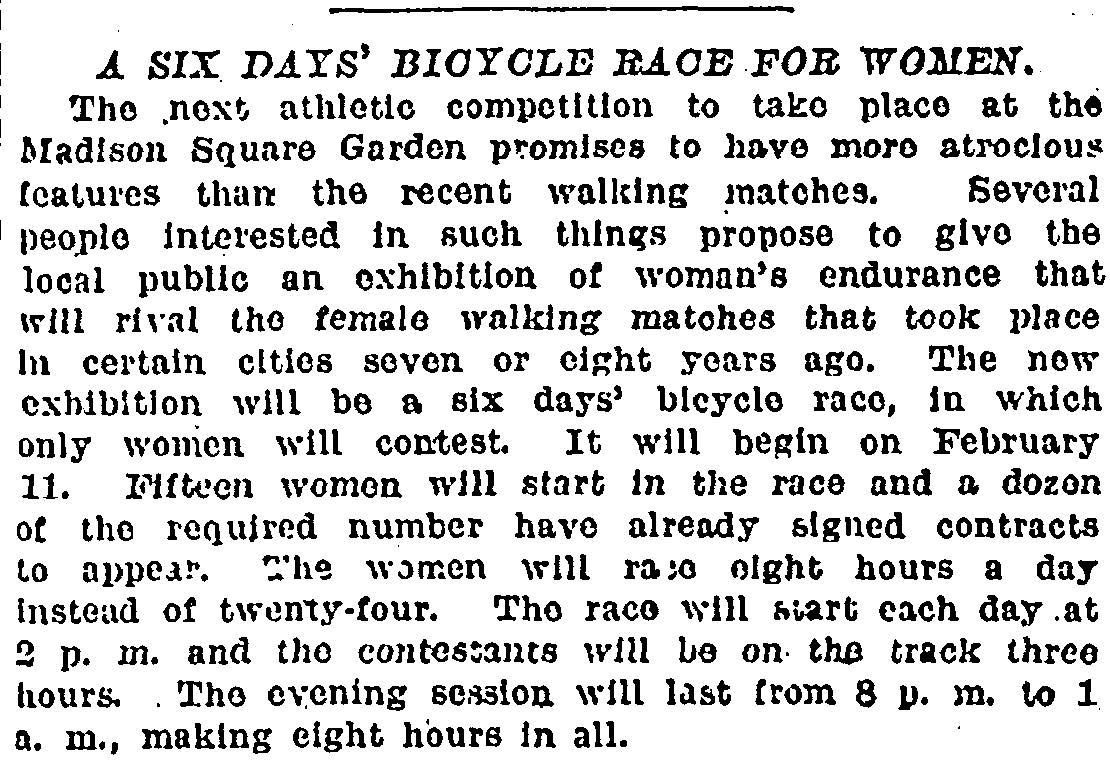 Two years later in 1891 the Cleveland Plain Dealer ran an illustrated article on the “astonishing recent growth of the bicycle habit,” noting particularly that women were flocking to participate. Reporter John Heaton wrote:

Perhaps the most interesting feature of the present ‘cycling outlook is the number of women who wheel. Here the difference of motive in the sexes comes out strong. Men wheel because they want to, women because others do…. 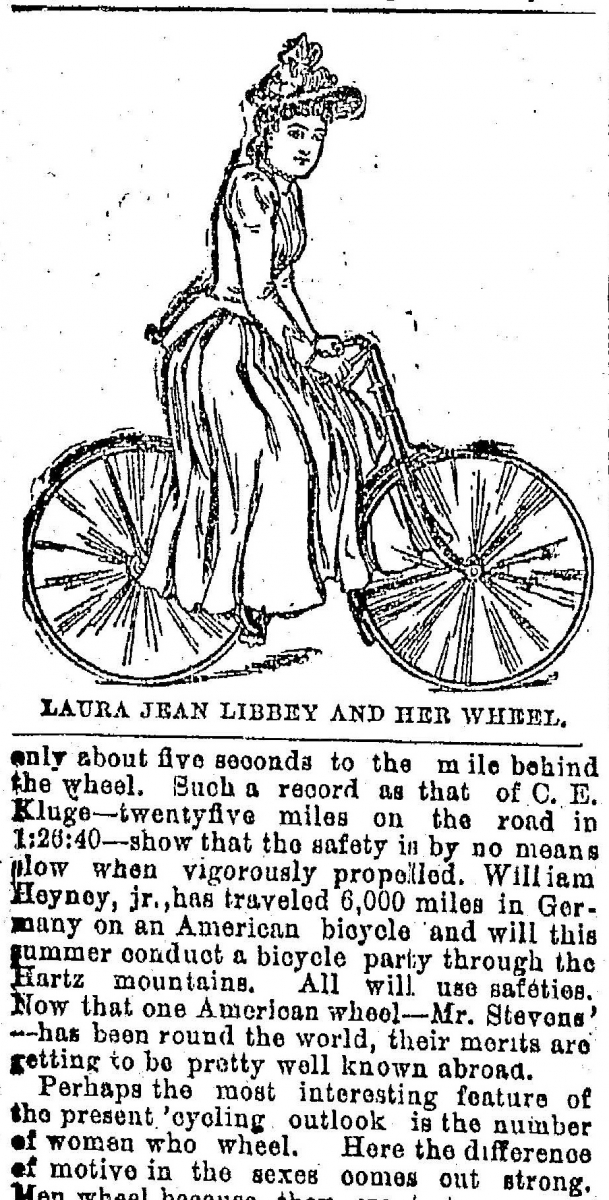 Among the naysayers the objections mostly emphasized how demeaning and physically harmful this exercise was to the fairer or weaker sex. In the fall of 1891 the Arkansas Jacksonian and other American newspapers headlined an article “Thinks It Looks Very Vicious. A Women’s Opinion of Women Who Ride Bicycles.” The argument is mostly based on a putative son announcing his engagement. She writes that if

…he came to me and said, “Mother, she is the nicest girl in the world and she rides a bicycle with me,”….I would be the worst mother-in-law that ever lived until the bicycle was broken….It may seem to you jaunty, it may look to you charming, coquettish, but I doubt it….how would you like to see your mother ride a bicycle?

The issue of proper dress for wheeling became an issue for several years. In September 1891 the New York Herald let readers in on a secret meeting of wealthy women who had formed a club. The order of business was to select a bicycling outfit. They had the means to have these custom made.

It consists of a natty blue yachting cap, a neat fitting tailor made jacket and skirt of dark blue serge reaching to the ankles. The costume is said to be very becoming. There is nothing conspicuous about it, and, in fact, nothing to attract attention to it. 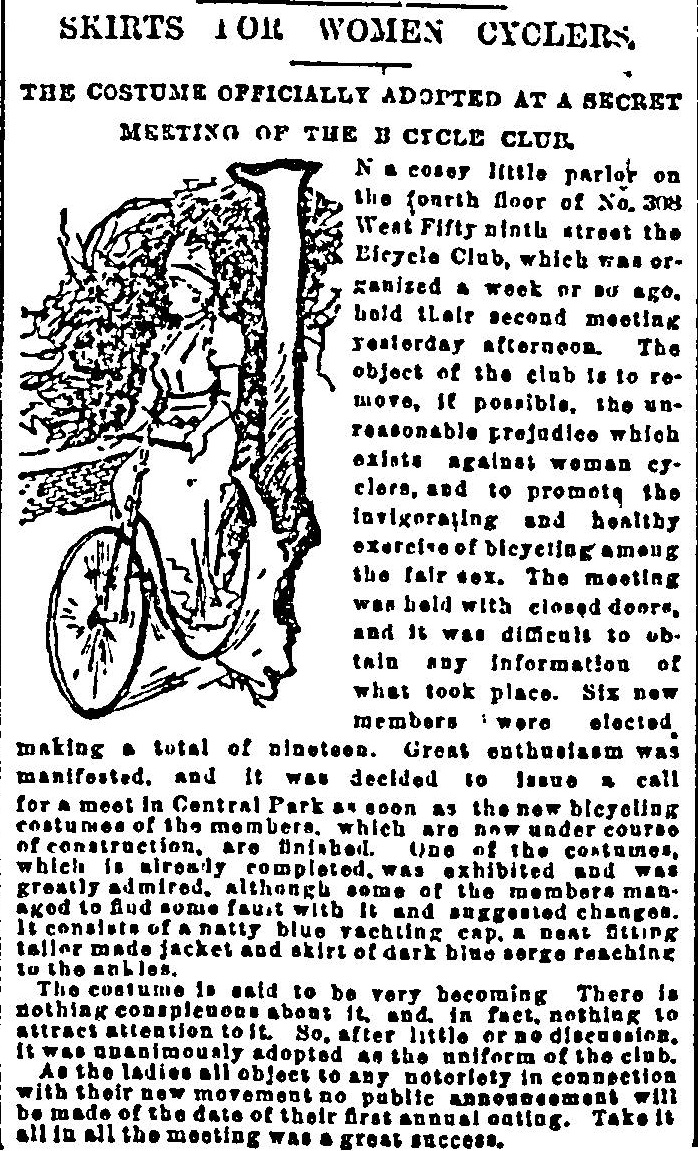 In the summer of 1893, the Springfield Republican headlined an article “Bicycle Riding for Women, offering “correct attitudes and dress” in order to “remove much of the prejudice against this healthful exercise.” The advice in short: dress modestly and be graceful.

Fully as important as dress is the position in which a woman sits. The handle bars must be high enough that she can sit straight and draw in good full breath. This hump-backed way of riding is bad enough in a man; in a woman it is atrocious.

The Omaha World-Herald in April 1894 ran this headline: “Women Who Wear Bloomers.” The reporter writes that men may not like this but “will have to get used to it.” He adds a description of “a young woman in a jaunty cycling suit of the new patterns. She had the abbreviated skirts, knee trousers and leggings…” The writer adds:

Mrs. F.D. Dempster and Mrs. George Van Tassel…appeared in similar costumes the same day and created quite as much of a sensation. They took a spin together and enjoyed themselves in spite of the comments their costumes called forth….[they] comforted themselves with the thought that they were pioneers and that others would follow in their footsteps until the costumes would cease to excite comments. In any event, they claim that the costume gives them so much more freedom and adds so much to the pleasure of cycling that it pays, even if they have to endure all sorts of comments. 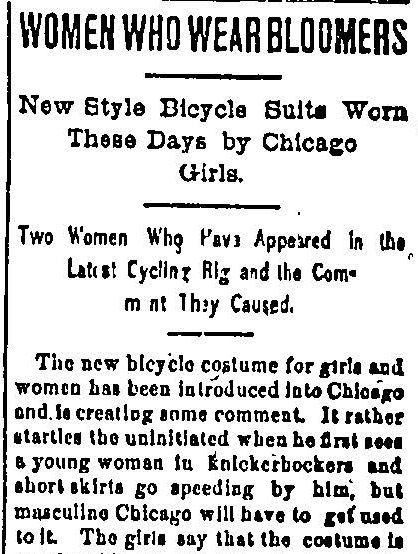 Those opposed to women on bicycles began warning of terrible physical consequences for them. A Mrs. Kendal of Chicago had written an article, which the Oregonian quoted and titled “Against Nature,” in which she called bicycle riding “a violent exercise.” She concludes:

When a girl gets astride of her bicycle she bids farewell to good looks. If she develops new muscles, be sure some other part will suffer, some faculty will be slighted, some natural trait will be undeveloped.” As for bloomers, they are abominable. 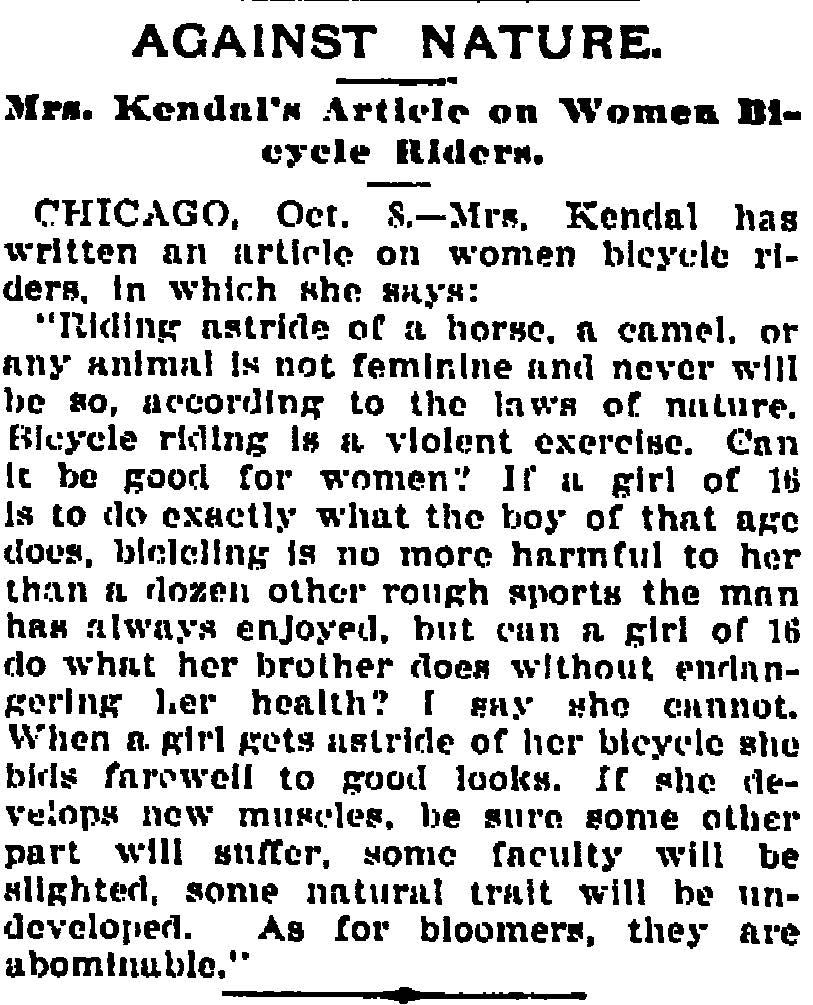 Other critics warned of physical deformities, as seen in this 1895 article from the Wheeling Register.

The modern woman is knock-kneed….Had she been wise the fact might never have been known….But she donned knickerbockers, she took to divided skirts and clothed herself in Turkish trousers. She mounted a bicycle, and the truth was known.

Others warned of moral depravity and physical harm. Lucifer the Light-Bearer, a newspaper in Topeka, Kansas, described “Dr. Forbes Winslow [who] is a very prominent English physician” who advises that riding results in conditions that “lead to abnormal appetites and desires.” The article writer disagreed, however, adding:

Dr. Winslow is a choice specimen of the paternalistic fogy or the fogyish paternalist. He should be carefully packed in camphor and bitumen and put away in a sandalwood chest where he will not be in danger of contamination by this wicked world, a world in which sacrilegious woman is awakening to the realization of the fact that she has a body that it is her right to make strong and beautiful by exercise… 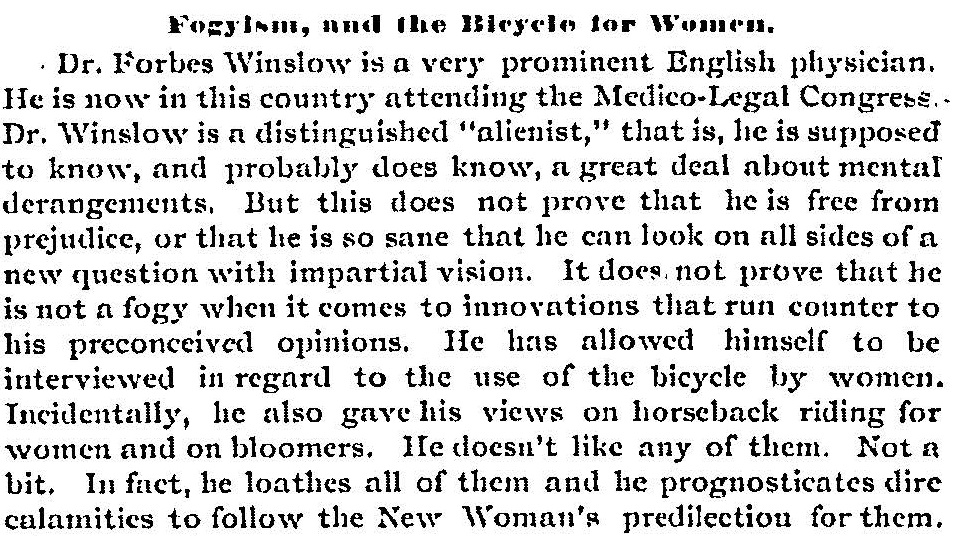 There were more unsubstantiated claims, including warnings of “the bicycle hand!” As described by the New York Journal and reprinted in the Kansas City Star, “pressure upon the handle bars enlarges them.”

It begins by a bulging out of the muscle on the side of the hand. This grows more and more prominent, and gets tougher and tougher until it is as hard as a piece of wood. Then the muscles of the fingers grow larger and harder until they, too, are all out of shape.

Unsurprisingly, “women are more susceptible to than men….A woman…never releases that death-like grip upon the handle, holding it as if a moment’s relaxation meant instant annihilation.” 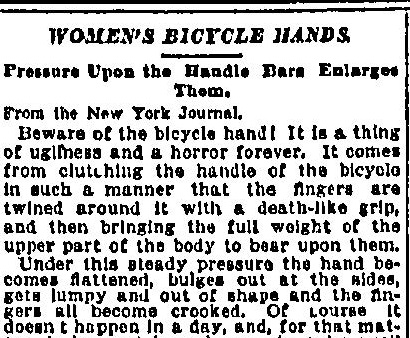 Premature aging among women is also attributed to bicycle riding, and, perhaps most astonishingly, a French doctor asserted women who cycle may become demented. As reported by the Omaha World-Herald in June 1897, with several subtitles including: “Bicycle Said to Have Developed a Species of Dementia in Women” and “Cases Where They Take an Inhuman Delight in Riding Down Their Best Friend.”

The doctors of France are puzzled by a new mania which is afflicting women who ride bicycles. The feminine cyclists are becoming extremely cruel. Medical men who have made a study of the matter are inclined to ascribe it to a form of insanity…

They found seventeen women who had been seized with the same irrepressible desire to injure all cyclists of their own sex whenever possible, at such time as they were at the wheel. The desire apparently took the same form in every instance, the first action being a violent collision, and then repeated attempts to ride over the form of the fallen cyclist. 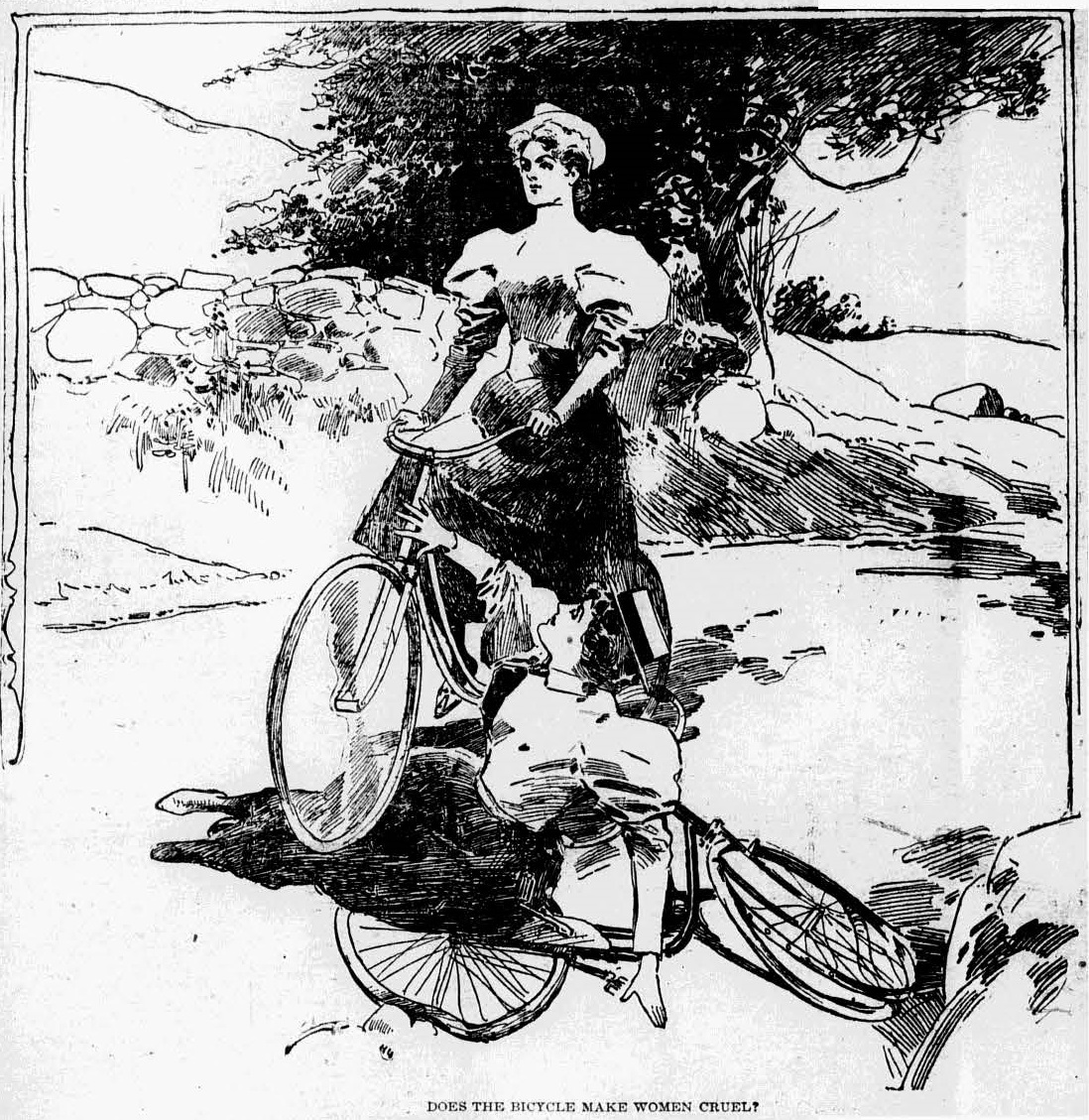 Women were not deterred. They raced, crossed the country, kept adapting their clothing, and relishing their freedom. The introduction of the automobile made a dent in the bicycle industry. Soon women were driving and, a few years later, voting. The women won despite significant opposition. 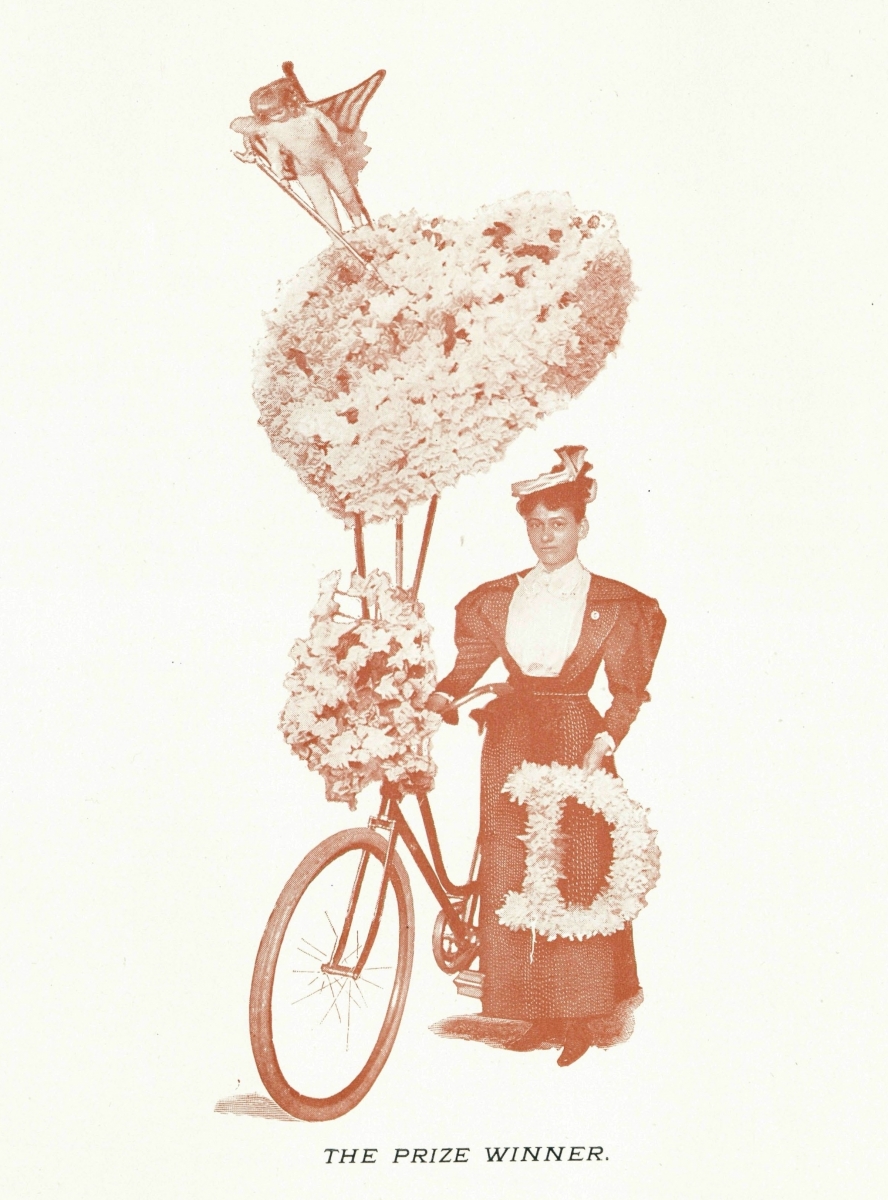