“Is it proper to call every Indian a savage?”: Early Printed Accounts of the Social Life and Customs of Native Peoples 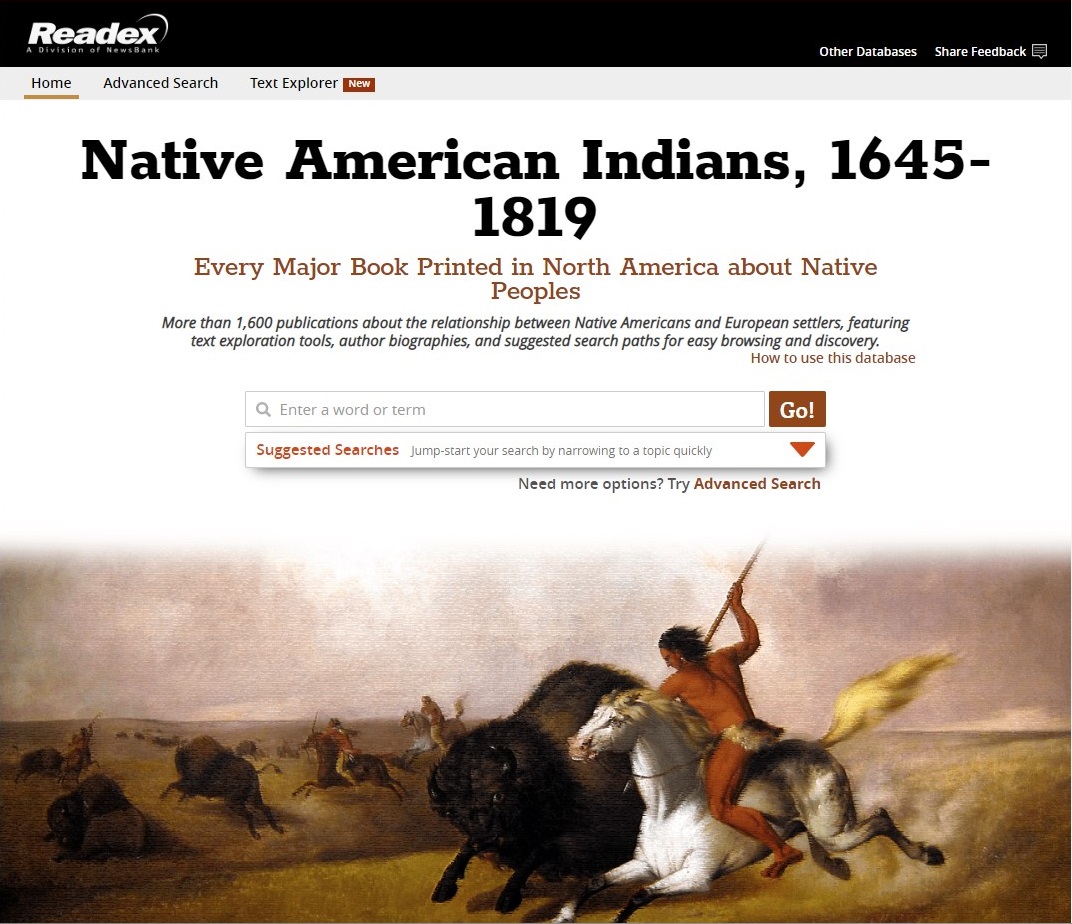 Published accounts of the native peoples of North America in the late 18th and early 19th centuries—as depicted in these wide-ranging early American imprints—were varied in accord with the beliefs of the narrators. 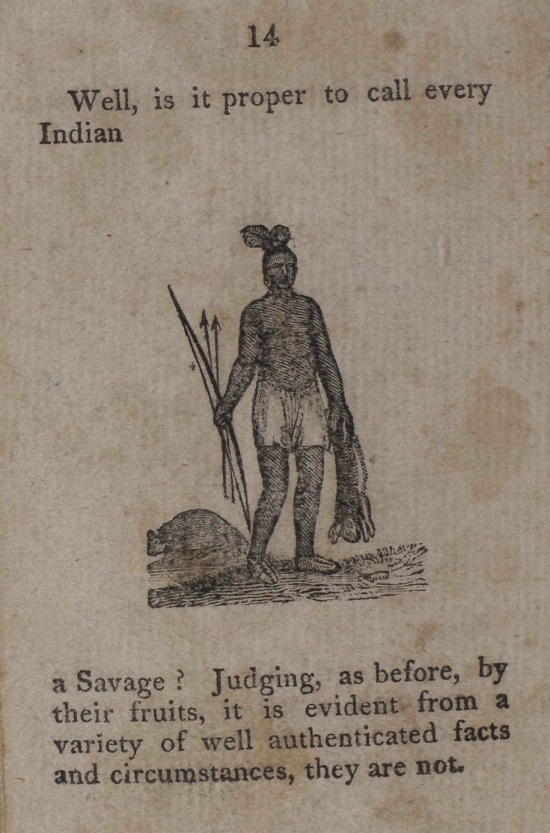 As described in his book below, the Reverend David Jones made two visits “to some nations of Indians on the west side of the River Ohio” in the early 1770s. On his travels he found several churches had been established among the Indians. After leading worship services at them, he remarked, “It was truly pleasing to behold the worship of God here, in a land so lately overspread with heathenish darkness and universal ignorance of God.” He subsequently described “some rude Indians…who had behaved insolently...” 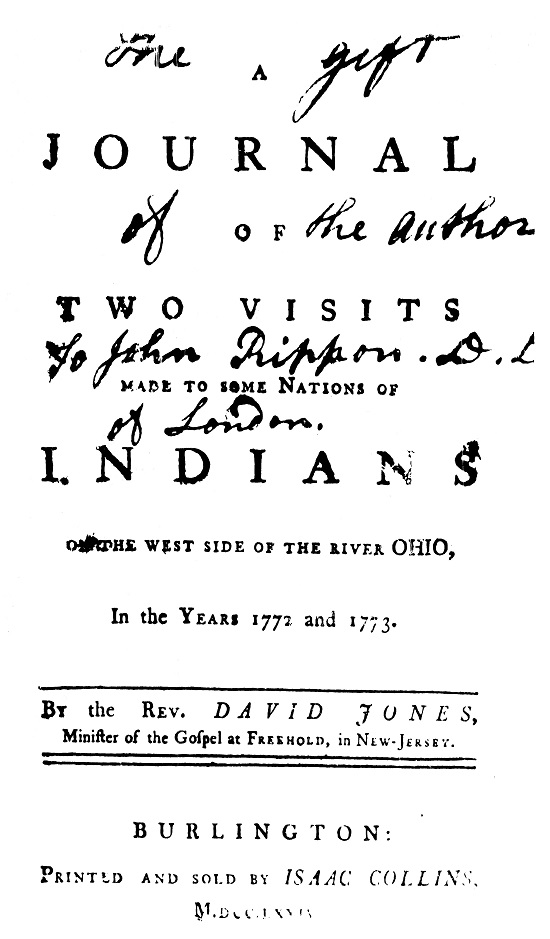 A more accepting and nuanced description of Indian tribes can be found in “Thoughts on the State of the American Indians” by “a Citizen of the United States.” Its author Silas Wood regards the Indians as untutored war-like savages, but he blames the European immigrants for making everything worse because

…they have furnished them with more deadly weapons of destruction, and whetted their natural appetite for blood, by the allurement of an intoxicating reward….and by nourishing the natural enmity of the tribes, they rendered them the instruments of each other’s destruction. 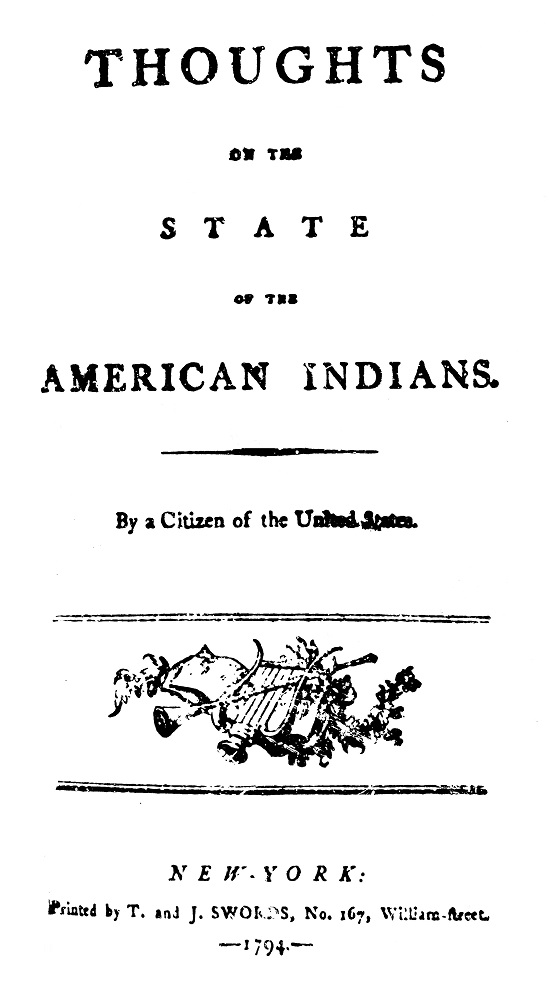 A dispassionate and scientific appraisal of the social life and customs of Indians is assessed by Dr. Benjamin Rush in “An oration, delivered February 4, 1774, before the American Philosophical Society.” Rush posits original analyses.

The state of society among the Indians excludes the influence of most of those passions which disorder the body….It is remarkable that there are no deformed Indians…

The great American naturalist William Bertram went among several Indian peoples—“the Cherokee country, the extensive territories of the Muscogulges, or Creek Confederacy, and the country of the Chactaws” —to explore “the soil and natural productions of those regions, together with observations of the manners of the Indians.” It was his style to combine these objects of his observation using elegiac language.

How happily situated is this retired spot of earth! What an elisium it is! where the wandering Siminole [sic], the naked red warrior, roams at large, and after the vigorous chase retires from the scorching heat of the meridian sun. Here he reclines, and reposes under the odoriferous shades of Zanthoxilon, his verdant couch guarded by the Deity; Liberty and the Muses, inspiring him with wisdom and valour, whilst the balmy zephyrs fan him to sleep. 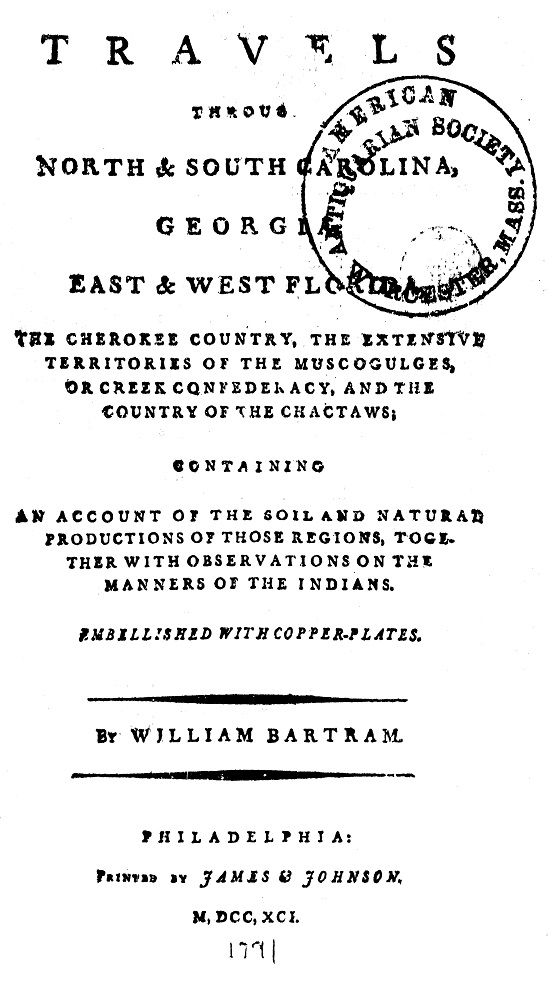 Among the religious, the Quakers’ missions to the Indians were unique. They did not proselytize, believing the Indians’ spiritual practices were of equal validity to their own. Rather, Quakers would live among the tribes teaching them to farm, to operate sawmills, and build houses. When they departed, as they always did, they left all of their tools with the Indians. “A brief account of the proceedings of the committee, appointed in the year 1795 by the Yearly Meeting of Friends of Pennsylvania” provides accounts of these missions. 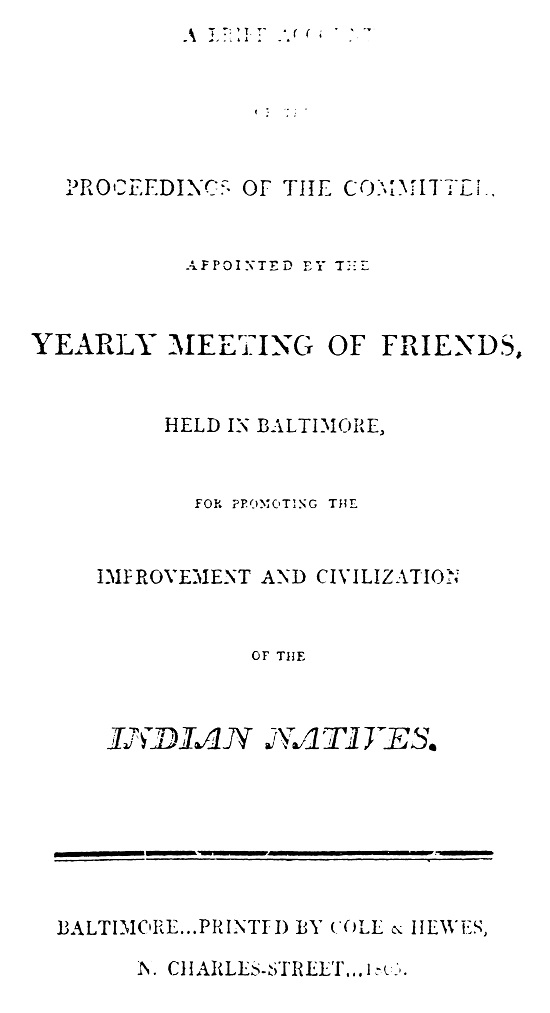 Children’s books of the early 19th century generally treated Indians kindly, as seen in both simple declarations and more involved stories. Among the former was “False Stories Corrected” which included an illustration of a native and asked “Well, is it proper to call every Indian a savage?” and answers “Judging, as before, by their fruits, it is evident from a variety of well authenticated facts and circumstances, they are not.” 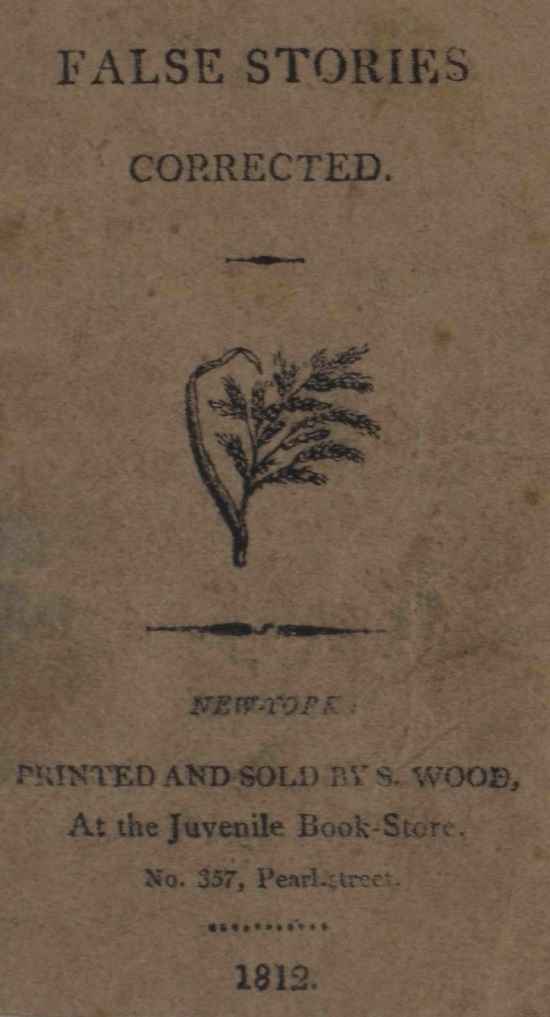 Priscilla Wakefield’s “A Brief Memoir of the Life of William Penn compiled for the Use of Young Persons,” published in 1818, emphasizes Penn’s fair and respectful dealings with various tribes.

[H]e was careful to make the Indians understand that they should be treated with justice and candour; he therefore stipulated, that all goods exchanged with them for their furs, should be sold in a public market, that these uninformed natives might not be imposed upon by artful Europeans; that if any man should offer any injury towards an Indian, he should suffer the same penalty of the law, as if he had committed it against his fellow-planter… 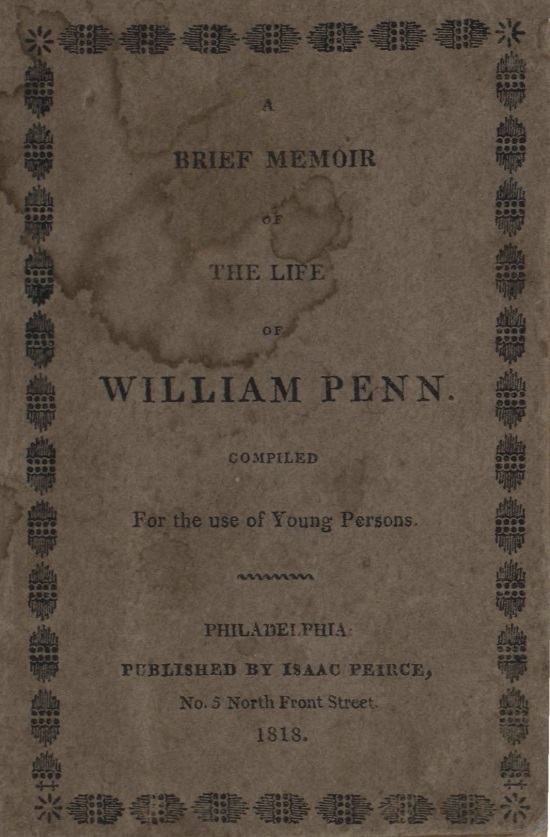 In 1811 Priscilla Wakefield published “Sketches of human manners, delineated in stories intended to illustrate the characters, religion, and singular customs, of the inhabitants of different parts of the world.”  She was an English Quaker and her attitudes toward the Indians reflects her religious beliefs.

In friendship they are ardent and faithful; in enmity their revenge knows no bounds….To strangers they are humane and hospitable, freely sharing with them whatever they possess….They think it the highest merit to overcome their enemies by stratagem rather than force… 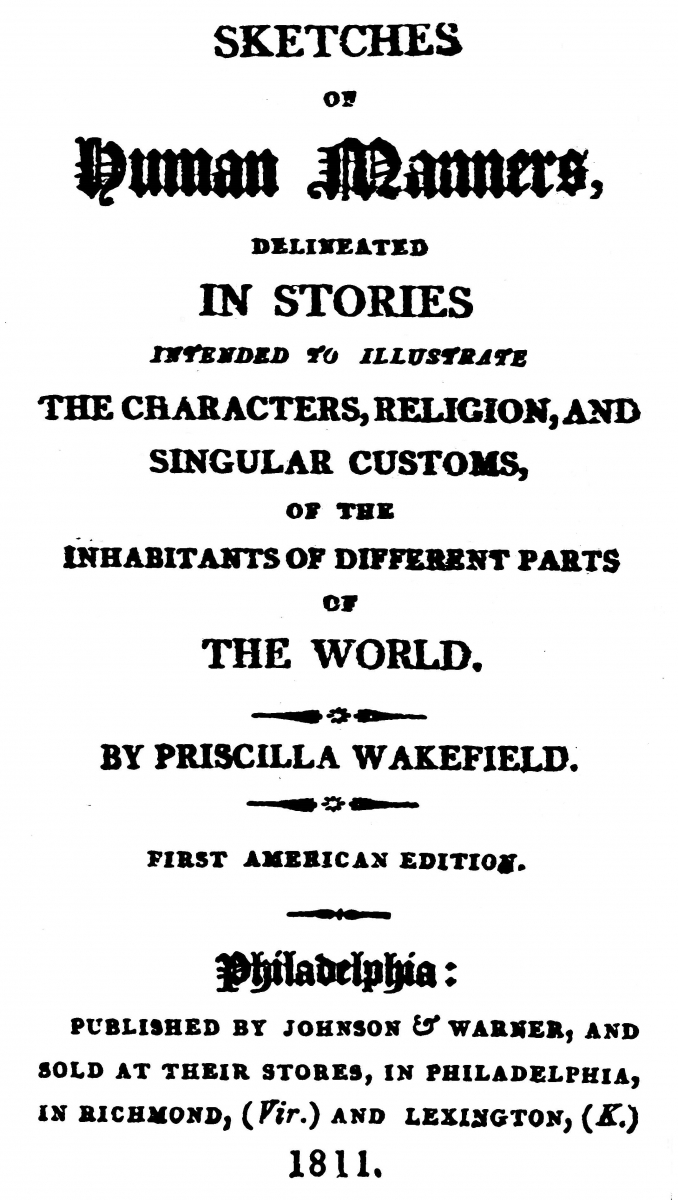 “The Hunters, or the Sufferings of Hugh and Francis, in the Wilderness. A True Story” was published in 1814 as a book for children. It as a harrowing tale of two young men, one white and one Indian, who endure terrible conditions while lost in the forest for two months. The Indian lad proves to be a hero. 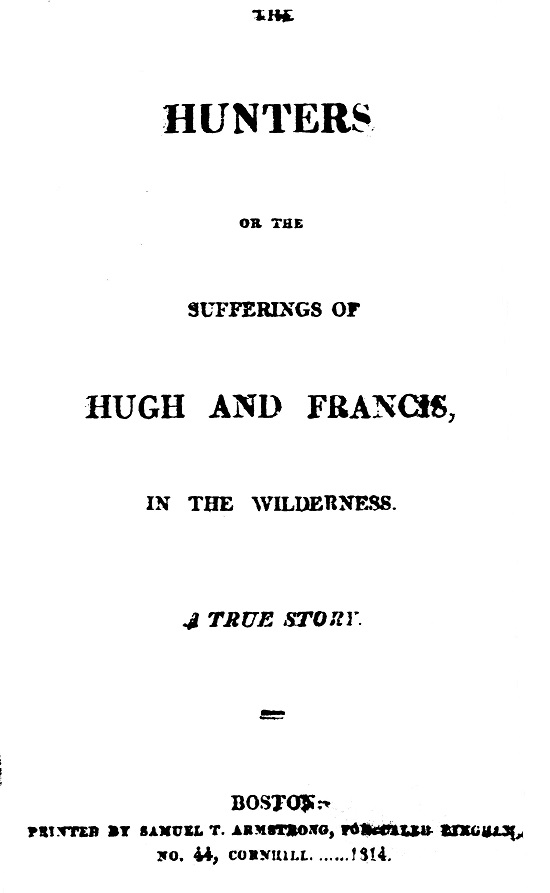 Christian ministers tended to regard the aboriginal peoples as being desperately in need of salvation, sending missionaries among them to achieve this purpose. “A Brief View of the Missionary Proceedings in the West Country…” was published in 1807 by the Western Missionary Society. It provides a detailed account of the missionaries, the tribal members, and their mixed success in conversions. 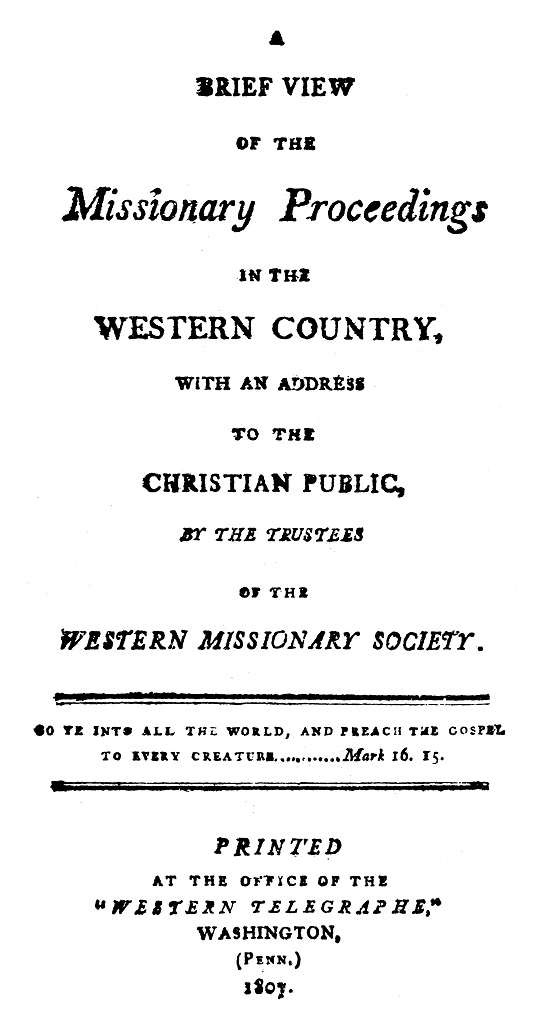 In addition to missionary proselytism, ministers were called on to deliver sermons to hapless persons about to be executed and the large crowds gathered to witness the punishment. When Katherine Garrett, “an Indian-servant, (who was condemned for the murder of her spurious child,” was standing on the gallows, Reverend Eliphalet Adams preached at length. The publication of this sermon appended the woman’s “dying warning and exhortation.” 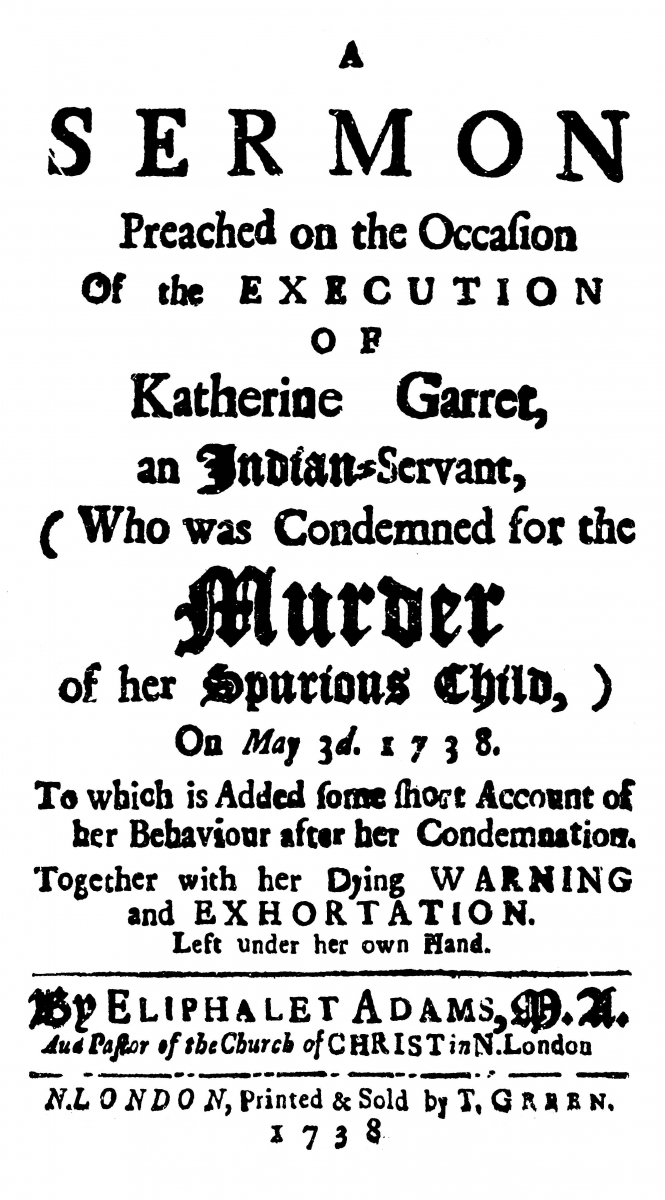