“A newspaper for sensible people or for fools?”: An 1894 Lecture on “The Making of a Newspaper Man” 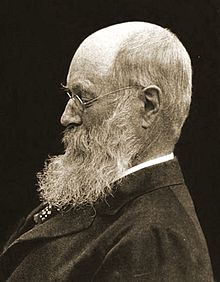 Journalist Charles A. Dana (1819-1897), noted editor of the New York Sun, delivered a lecture on “The Making of a Newspaper Man” at Cornell University on January 11, 1894. This lecture and two related ones delivered in 1888 and 1893 were published the following year in a volume titled The Art of Newspaper Making. On January 19, 1895, the Kansas City Star published this article summarizing his Cornell address. Here’s the Star’s account of what Dana said: 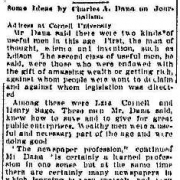 The newspaper profession is certainly a learned profession in one sense, but at the same time there are certainly many newspapers in which learning is very sparsely and very meanly applied. On the whole, the newspaper is very much like human nature—it is right sometimes and it is wrong very often. But the newspaper is not only a necessary institution, but it is a useful and beneficial institution. Just now the business of making newspapers is going through a revolution. It is passing through changes of a very radical and remarkable nature.

That revolution comes primarily from new high-speed printing presses, Dana says, and with that change…

An important question to be decided by the newspaper conductor is, what kind of newspaper will you make? That question may be divided into two. Will you make a newspaper for sensible people or for fools?

I would not be understood as meaning that there is anything unworthy in making a newspaper for fools, since there is high authority for the statement that fools form a large part of the community, and it is perfectly right to provide for them newspapers. We see that this is very conscientiously performed by very able individuals and I have heard that they make money by it.

For my part I had more entertainment in making a newspaper that tries to be of the other kind.

He then discusses what type of education the aspiring newspaperman should have.

I myself am a strict partisan of the old-fashioned classical education. The man who can read Virgil, Tacitus, and the Iliad, and if he can read Aristotle and Plato all the better, is the man I have in mind. But, above all, he should know his own language, the most beautiful and wonderful language in existence. He that is going to write the English language, who is going to publish a daily manual in that language, must know that language thoroughly.

Dana defends the printing of “obnoxious things”, because the paper is “the mirror of the day’s events” and bad things occur more frequently. Also, if your paper did not print certain things, he says, customers would take another paper that did.

If a Divine Providence permitted such things to occur surely we must be permitted to tell the facts to each other.

Dana concludes with a set of general maxims, the final one being that a newspaper must be prepared to admit their mistakes.

If a man has not the moral courage which enables him to say ‘Yes, I was wrong,’ he had better retire from business and never make another newspaper.

There nothing in the article to say how Dana’s lecture was received by the audience.