The December release of the American Slavery Collection, 1820-1922: From the American Antiquarian Society includes a history of Pennsylvania Hall, which stood completed for three days before being burned to the ground by rioters, a collection of dialogues for school children, including the script on slavery excerpted below, and an 1853 edition of Thomas Jefferson’s Notes on the State of Virginia, which includes his views on slavery. 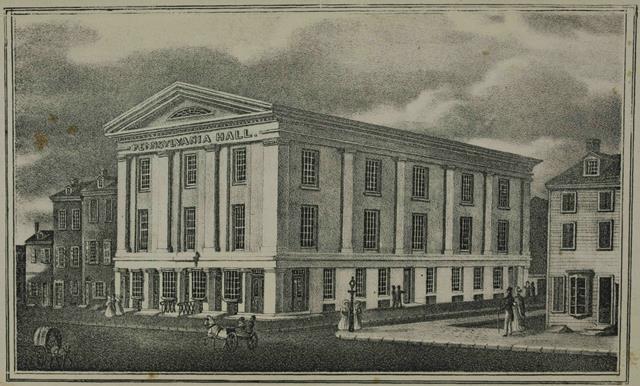 In 1838, the Pennsylvania Anti-Slavery Society built Pennsylvania Hall to serve as a forum for the free exchange of ideas and principles. Three days after its construction was completed, the hall was destroyed in a fire set by an anti-abolitionist mob. The History of Pennsylvania Hall includes the texts of speeches given within its walls as well as this description its beautiful interior:

Behind the arch was a dome divided into panels, supported by pilasters and an entablature of the Grecian Ionic order, —the whole forming a chaste and beautiful arrangement. On this forum was a superb desk or altar, with a rich blue silk panel; behind this stood the president’s chair; on each side of this was a carved chair for the vice presidents; next to these were sofas; in front of which stood the secretary and treasurer’s tables, with chairs to match. All these articles were made of Pennsylvania walnut of the richest quality; the chairs were lined with blue silk plush; the sofas with blue damask moreen; and the tables were hung with blue silk.

The ceiling of the saloon was formed into one large panel, with coves all round the wall; in the centre of this panel was a ventilator nine feet in diameter, having a sunflower in the centre, with gilt rays extending to the circumference. In the center of the flower was a concave mirror, which at night sparkled like a diamond.

John Quincy Adams, while declining an invitation to speak at the opening of the Hall for fear of being a distraction, wrote in support of the Association and its mission:

I learnt with great satisfaction…that the Pennsylvania Hall Association have erected a large building in your city, wherein liberty and equality of civil rights can be freely discussed, and the evils of slavery fearlessly portrayed.

The right of discussion upon slavery, and an indefinite extent of topics connected with it, is banished from one-half the states of the Union. It is suspended in both houses of Congress—opened and closed at the pleasure of the slave representation: opened for the promulgation of nullification sophistry; closed against the question, WHAT IS SLAVERY? at the sound of which the walls of the capital staggered like a drunken man. 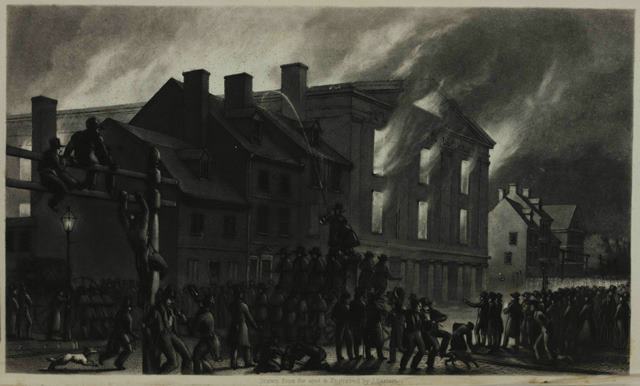 In the days following the conflagration of the Hall, Thomas Hunt, a temperance advocate who “was conscientiously opposed to the views of many of the Managers of the Hall on the subject of Abolition,” wrote a note thanking the Anti-Slavery Association for the invitation to speak and deploring the mob action:

I regret that the Hall has been destroyed. I despise alike the spirit that instigated, and that defends, or justifies, or palliates the shameful, sinful, cowardly, brutish deed. 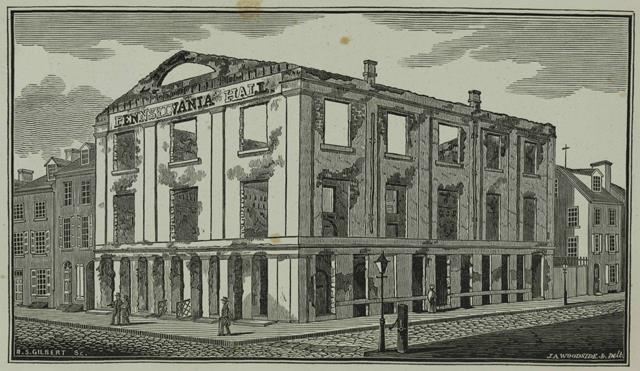 Familiar Dialogues and Popular Discussions: For Exhibition in Schools and Academies of Either Sex, and for the Amusement of Social Parties (1853)

William Bentley Fowle worked as a bookseller until 1823 when, after studying pedagogy, he became a teacher and advocated for the Monitorial System, a popular educational method in the early 19th century. He began publishing the Common School Journal in 1842, which was edited by Horace Mann, and gave speeches supporting Mann’s educational reforms, which would eventually replace the Monitorial System. By the time of Fowle’s death in 1865, he had published nearly 50 instructional books.

One such book is Familiar Dialogues and Popular Discussions which contains a script for a town meeting on the subject of slavery to be performed by the schoolchildren. After debating the constitutional and political obstacles to abolishing slavery, the discussion turns to the condition of the slaves and their masters and the relationship between Northerners and Southerners: 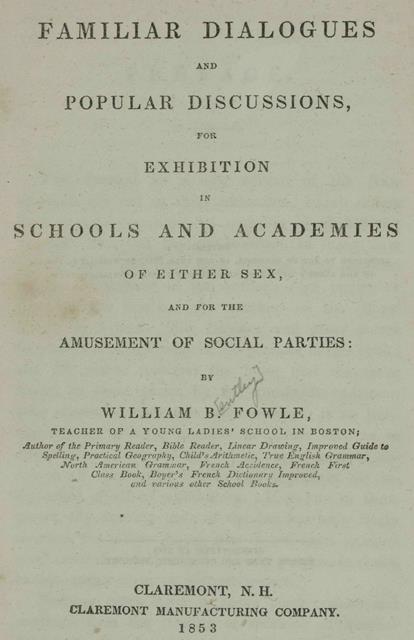 Moderator. You think, then, that if the slaves were all freed immediately, they would remain ignorant, and unable to rise above the state in which they are now.

Dr. Bumper. I do. My opinion is, that the slaves were gradually improving, and new means of improvement were constantly allowed, until the rashness of their friends alarmed the masters, and induced them to withdraw these very privileges. The present movement, I fear, will throw the slaves back more than half a century.

Mr. Strike. Mr. Moderator, the gentleman is saying much that contradicts all my notions upon this subject. Sir, there is abundant proof that slaves are every where badly treated. The wonder is, sir, that they do not rise, sir, at once, and destroy their masters. They would do this, sir, if they were not kept so ignorant.

Mr. Prudent. Mr. Moderator, I hope that the gentleman’s argument is not approved by the party to which he belongs. If teaching the slaves would so certainly lead to the destruction, the massacre, of the masters and their innocent families, who can blame the masters for keeping them ignorant? I have no fear that useful knowledge will produce any such result; but I do fear that the sentiments of some of my friends are unchristian, if not barbarous. Sir, the master has rights, as well as the slave; and in helping the one, we have no right to injure the other. The case is one of great difficulty. I believe few planters, if any, refused to let their slaves hear the gospel preached, before the present alarm. But, sir, if we insist upon it that the Scriptures forbid slavery, and even authorize the slave to use violence in recovering his liberty, can we blame the planters for refusing to their slaves both the preached and the written word? I do believe, sir, that we are meddling with a subject which does not belong to us, and which had better not be touched, than to be touched rashly. I do hope, sir, that, while we all endeavor to use our own liberty, we shall not abuse it; and that, while we are showing our compassion and love for the poor African, we shall not learn to hate our white brethren, because they differ from us, not in regard to the calamity of slavery, but in regard to the best method of putting an end to an evil from which they, and not we, are suffering.

Also included in this month’s release is an 1853 edition of Jefferson’s Notes on the State of Virginia, first published anonymously in Paris in 1785. In a chapter on the manners and customs of Virginians, Jefferson writes:

There must, doubtless, be an unhappy influence on the manners of our people, produced by the existence of slavery among us. The whole commerce between master and slave is a perpetual exercise of the most boisterous passions, the most unremitting despotism on the one part, and degrading submissions on the other….And with what execration should the statesman be loaded, who permitting one-half the citizens thus to trample on the rights of the other, transforms those into despots, and these into enemies, destroys the morals of the one part, and the amor patriae of the other. For if a slave can have a country in this world, it must be any other in preference to that in which he is born to live and labor for another; in which he must lock up the faculties of his nature, contribute as far as depends on his individual endeavors to the evanishment of the human race, or entail his own miserable condition on the endless generations proceeding from him. With the morals of the people their industry also is destroyed. For in a warm climate no man will labor for himself who can make another labor for him. This is so true, that of the proprietors of slaves a very small proportion indeed are ever seen to labor.