“Like a Tiger in the Toils”: Highlights from Caribbean History and Culture, 1535-1920

The June release of Caribbean History and Culture, 1535-1920: Imprints from the Library Company of Philadelphia includes a biography of the “Terror of Jamaica,” a letter from British slavery apologists justifying continuation of the institution in the Bahamas, and the descriptions of an English naturalist.

The Life and Exploits of Three-Finger'd Jack, the Terror of Jamaica (1801) 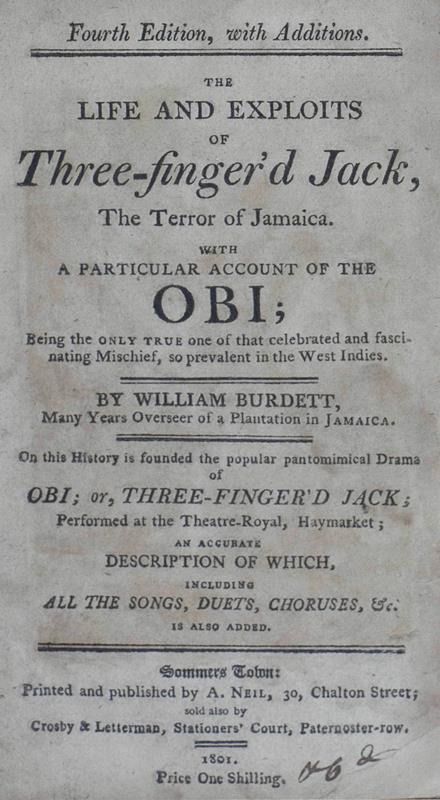 To some, Jack Mansong was the most feared runaway slave in Jamaica during the 1700s. In fact, Mansong was so infamous his life has been the subject of several books, two of which became bestsellers, and dramatic performances, such as the musical Obi which had a run of at least nine years in British theatres. William Burdett’s work begins by describing Mansong’s early life in Africa and his eventual capture and enslavement:

Mansong, with gleaming saber, like a tiger in the toils, darted on the foremost, and cleft him to the ground. The weapons of his adversaries clashed over his head; but he heeded not death, and struggled hard to break the chains that encircled him. He still fought, and his blood streamed around; till at length quite exhausted, he fell, covered with wounds; and four of his adversaries lay dead beside him. The others bound up his wounds, and, with the rest of his party, sent him to the caravan of a Slatee, or Slave-merchant.

Burdett continues, writing of Mansong’s arrival in Jamaica as a slave, his unbreakable spirit, and his promise to seek revenge against his captors:

He was branded on the breast, and smiled upon the red-hot iron as it [neared] him; but he vowed revenge, and called upon the God of his country to witness his vows of vengeance, on the European race. He had repeatedly received the lash of his employers on his bare shoulders; and as the blood trickled down his back, so did he resolve that for every drop, a white man’s blood should sprinkle the plain!

Eighteen long tedious months had now elapsed since he was dragged from his native country—eighteen long months had heard his groans—and JACK (for so he was named after his arrival in Jamaica, and by which we shall in future call him) devised how to lash his persecutors with a rod of iron. 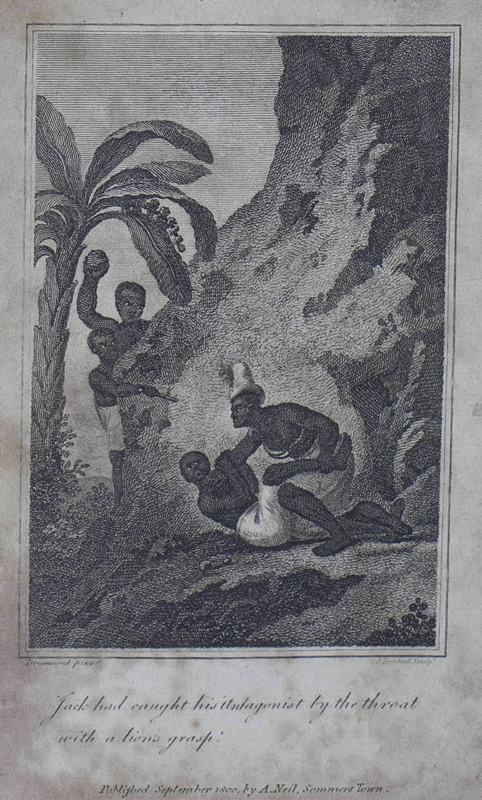 An Official Letter from the Commissioners of Correspondence of the Bahama Islands, to George Chalmers, Esq. Colonial Agent: Concerning the Proposed Abolition of Slavery in the West Indies (1823) 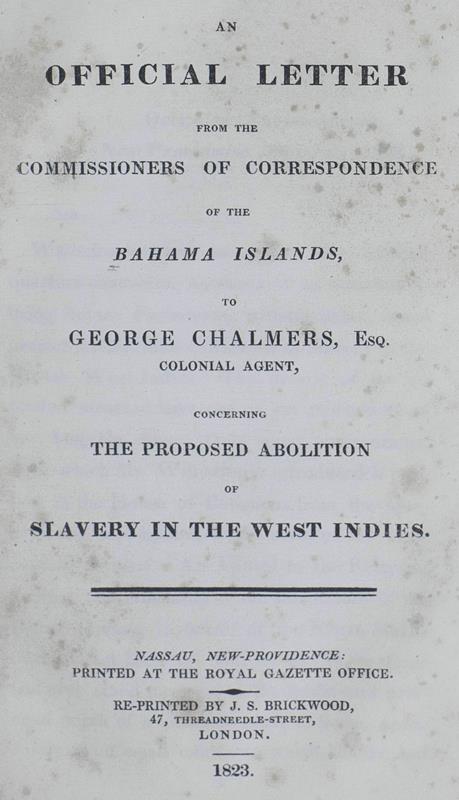 Sixteen years after the British prohibition of the trans-Atlantic slave trade and ten years prior to the abolition of slavery throughout the British Empire, the Commissioners of Correspondence of the Bahamas Islands encouraged the continuation of slavery.  To accusations by various abolitionist groups that many slaves were acquired illegally, they offered the following response:

Even admitting that the negroes brought from Africa were not all Slaves in their own country, prisoners of war, convicts, or otherwise regularly reduced to bondage—admitting that many of them were kidnapped, or carried off by fraud or force—the time is now receding out of view when those crimes are alleged to have been perpetrated. The supposed actors in those scenes have either long since passed, or are passing fast, from the stage of existence, and their successors have been left in guiltless possession of the property in question—confirmed and guaranteed to them for ever, on the faith of their country, and by the solemn enactments of its most sacred laws. Whatever sins a few individuals may have committed a century or two ago, the present proprietors of our slaves hold them as such, for the most part, by fair and lawful purchase. In the language of the Scriptures they are our money, and to divest us of them against our will, however plausible the pretext for so doing, would, in plain language, be nothing less than robbery. 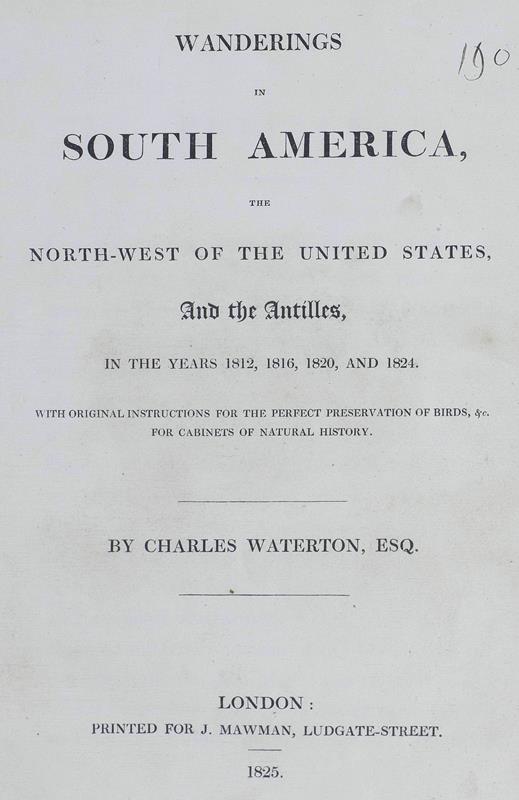 English naturalist and explorer Charles Waterton was born in 1782 to Thomas Waterton and Anne Bedingfield. His ancestry claims eight saints and a feudal lord whose vast estate was eventually passed to the Watertons. Charged with the care of his uncle’s property in British Guiana, Charles Waterton traveled to South America in 1804. While there he embarked on several expeditions and as a skilled taxidermist preserved many of the animals he encountered. The descriptions of his discoveries in Wanderings of South America inspired many, including Charles Darwin and Alfred Russel Wallace, both of whom would later independently conceive of the theory of evolution through natural selection.

Waterton did not have such high expectations for his book’s impact. Writing in the preface, he divulged his uncertainty:

I offer this book of “Wanderings” with a hesitating hand. It has little merit, and must make its way through the world as well as it can. It will receive many a jostle as it goes along, and perhaps is destined to add one more to the number of slain, in the field of modern criticism.”

Although Waterton’s focus is on the natural world, he also provides descriptions of many capital cities throughout the Antilles. In recounting the condition of St. John’s, Antigua, Waterton offers a tongue-in-cheek assessment of the town that includes a clever reference to Don Quixote’s horse:

In better times [St. John’s] may have had its gaieties and amusement. At present it appears sad and woe-begone. The houses, which are chiefly of wood, seem as if they have not had a coat of paint for many years; the streets are uneven and ill-paved; and as the stranger wanders through them, he might fancy that they would afford a congenial promenade to the man who is about to take his last leave of surrounding worldly misery, before he hangs himself. There had been no rain for some time, so that the parched and barren pastures near the town might, with great truth, be called Rosinante’s own.

Waterton also writes of encountering vampires but that has to be left for another day.