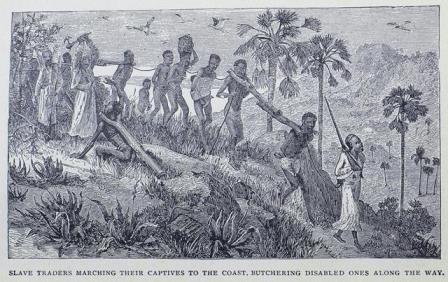 The September release of Afro-Americana Imprints, 1535-1922: From the Library Company of Philadelphia includes works examining subjects ranging from the Biblical origins of African peoples to the social and economic progress of African Americans. Also found this month is a collection of dialect poetry by Elliott Blaine Henderson, a contemporary of Paul Laurence Dunbar.

A Sketch of the Origin of the Colored Man: His Great Renown; His Downfall and Oppression; Also, the Prejudice Which Did Exist, and Still Exists to a Certain Extent, Against Him (1882)

An irrepressible, active desire to do something to elevate my race to an honorable and equal position among the enlightened quarters of the globe has been the great leading principal [sic] that has actuated me in the preparation of this pamphlet. And so well convinced am I, that this plan which I have proposed is the only practical one for achieving the desired end, that I certainly hope to see it prosecuted with energy and zeal, until the recognition of my race shall be firmly established as those of other races in America.

Thus begins Charles Griffin’s historical account of the peoples of Africa. After tracing their origins as far back as Ham, the youngest son of Noah, Griffin turns his attention to the condition of African Americans in the late 19th century and the cause of the prejudice against them: 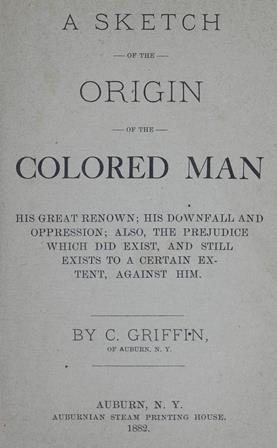 I will now give my views upon the prejudice of this nation. Mankind being originally equals in the order of creation, that equality could only be destroyed by some subsequent circumstance, as in the case of the colored man’s enslavement and oppression. Therefore, enslavement and oppression is the consequence of his distinction. But there is another and greater distinction, for which no truly natural or religious reason can be assigned, and that is the distinction of man on account of his color his Maker gave him. Male and females are the distinction of nature, good and bad the distinction of heaven. But how a race of men came into the world so exalted above the rest of his fellow-men, and distinguished like some new specie, is worth inquiring into; and whether they are the means of happiness or misery to mankind. The present existing prejudice against the colored man, so peculiar to this nation, has resulted from a vitiated education, and not from a principal [sic] of instinct, as some have professed to believe.

Progress of a Race, or The Remarkable Advancement of the American Negro from the Bondage of Slavery, Ignorance and Poverty to the Freedom of Citizenship, Intelligence, Affluence, Honor and Trust (Revised and Enlarged) (1902)

In the introduction to this work, Booker T. Washington acknowledges the difficult job of the biographer and historian: 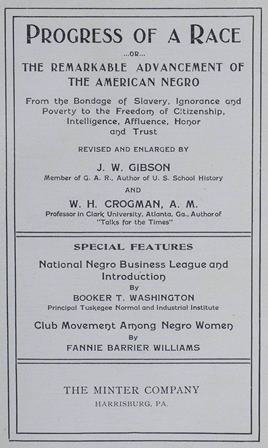 The task of the biographer of a people is too frequently a thankless one. In sifting out the conflicting elements which present themselves for his consideration he is apt to injure tradition. In using material which he thinks best he is likely to upset preconceived ideas of theorists. His work must be the result of careful thinking and an astonishing amount of finesse and diplomacy.

The historian of the Negro race has all this and more too. He must, in addition to the other duties which devolve upon him in his work, be able to prophecy and foresee the days to come. For the progress of the Negro is far from completed—it is yet in its incipient stage—and the eyes of the prophet must discern whither the road leads, upward or downward.

John William Gibson begins his work by pointing to the rapidly changing attitudes toward African Americans. He writes,

Attempts have been made in the past to prove that the Negro is not a human being. In this age of the world such a preposterous idea does not receive countenance….It is, however, to be noted that as late as 1868 a minister of the South advocated this theory.

Gibson then quotes the minister to illustrate not only how dramatically perceptions toward African Americans had improved, but also to illuminate the depravity of such a theory.

It is difficult to read E.G. Burkham’s introduction to Elliot Blaine Henderson’s collection of poems without cringing. What was meant as praise over one hundred years ago now echoes with condescension. Burkham, editor of the Columbus Dispatch, writes: 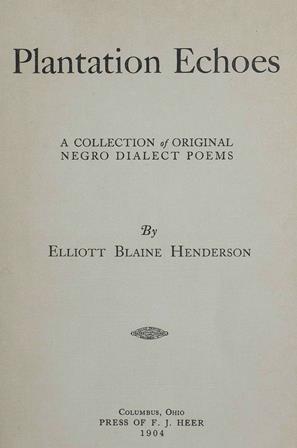 What is true of the melodies of the negro as developed in the simple existence on the plantation is also true of that other form of singing, verse-making. Among the negroes there have sprung up a number of exponents of the wisdom, wit and humor of the race. They have caught the spirit of others—the humble philosophers of their kind—and they have employed the dialect to reproduce the thought in all its quaintness and originality. One of the most notable of these exponents or interpreters….is Elliott Blaine Henderson…whose first volume of verse is herewith presented.

In much of what Mr. Henderson here presents, there is the rush of expression and the jingle of words that are so characteristic of the negro. There is also humor and there is sentiment, and always that other quality which makes verse in these days readable—good cheer.

He who correctly interprets the spirit of his race serves a good cause, and it is believed that Mr. Henderson will be found to have succeeded in his undertaking to make his people better and more widely understood.