“The Zeal of the Bigot”: Highlights from The American Slavery Collection, 1820-1922

The May release of the American Slavery Collection, 1820-1922: From the American Antiquarian Society includes rare items discussing the charge of religious fanaticism within the abolition movement and an economic approach to ending slavery by a future advisor to President Lincoln. 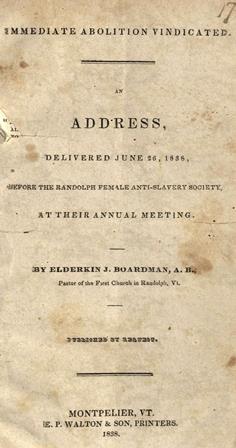 By Elderkin Jedediah Boardman, A.B., Pastor of the First Church in Randolph, Vt.

Rev. Elderkin J. Boardman was born in Bethel, Vermont, on June 1, 1791. He graduated from Dartmouth College in 1815 and later became a student of theology, graduating from the Andover Theological Seminary in 1820. Boardman was one of the first outspoken abolitionists in Vermont.

Addressing the Randolph Female Anti-Slavery Society on June 26, 1838, Boardman refuted the charge of religious fanaticism levied against abolitionists as merely a pretense to oppose a policy of immediate abolition:

Religion is now the same that it ever has been. Human nature is the same. And in the same circumstances, we always expect to see the same results. Whenever religion is arrayed against the leading sins and corruptions of the age, it is called fanaticism by the wicked, and its advocates, the disturbers of the peace, the injurious to society. We see an instance of this in our own times, and country; in which religion is directed against the abominations of slavery under the form of abolition societies.

Later, Boardman argued for the righteousness of the abolitionist movement, saying:

I have no fears of using too strong language upon this subject. Words but feebly, even, begin to express its horrors, its piercing moans, and groans, and despair. And yet it is very possible, there are those among us, who scarcely regard it as a sin. If there be any such, I will only say to them: Examine the subject; look at the facts as they are now spread out before this community, and you will no longer doubt the enormity of this sin.

In 1841, the Calvinistic Congregational Church in Fitchburg, Massachusetts, responded to accusations of inconsistencies in their policy toward slavery by pointing to the dissonance within the abolitionist movement.

The history of the existing anti-slavery organizations,—their harmony upon the nature and evils of slavery,—their divisions and strife as to measures, show at a glance where the grand difficulty lies. We esteem that difficulty great; and one that demands cool, collected and far-reaching wisdom, prudence and heavenly charity, rather than the flippant declamation of the ignorant, or the zeal of the bigot or partisan.

The leadership of the church later described eloquently the lack of cooperation they experienced when attempting to work with the wayward members of their flock, writing: 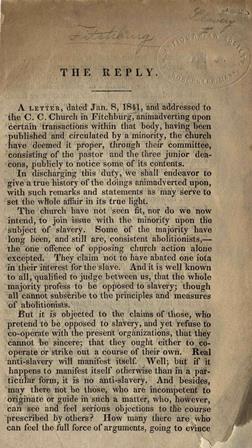 We would here remark, that the majority have not ceased to manifest a disposition to meet their brethren, upon what we, as well as some of their own number, regard fair and honorable grounds. We have not changed our views as to the propriety of church action; nor have they. Yet, while they loudly complain of our preamble and resolution, they have refused to aid us in removing it from the Record; and, when we have undertaken to move in this matter, and, if possible, bring about some amicable adjustment of our difficulties,—to unbind and set them back upon the unembarrassed ground they occupied before, they have uniformly frustrated all our attempts; and that by means, which seem to us alike unchristian and ungentlemanly.

Henry Charles Carey was a leading 19th-century economist who would become the chief economic advisor to President Lincoln. Carey believed in a natural system of economic laws which would inevitably lead to greater prosperity, especially for the working class. He felt the greatest constraint on the natural system he described was the ignorance and perversity of human nature. Carey argued against a boycott of products produced with slave labor, which would lead to a devaluation of slave labor, as a viable means to end slavery. In fact, he suggested, counter-intuitively, just the opposite by comparing, perhaps disingenuously, the system of American slavery with European serfdom. 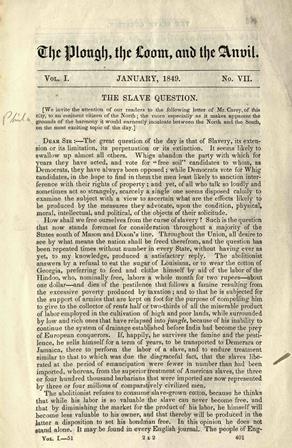 Throughout the world, and in all ages, freedom has advanced with every increase in the ratio of wealth to population. When the people of England were poor, they were enslaved, but with growing wealth they have become more free. So has it been in Belgium and in France. So is it now in Russia and Germany, and so must it everywhere be. India is poor, and the many are slaves to the few. So is it in Ireland. Freedom is there unknown.…If we follow the history of Tuscany, we can find men becoming enslaved as poverty succeeded wealth; and again may we trace them becoming more and more free, as wealth has grown with continued peace. So has it been in Egypt, and Sicily, and Spain. Everywhere poverty, or a deficiency of those aids to labor which constitute wealth, is, and has invariably been, the companion of slavery, and everywhere wealth, or an abundance of ploughs, and harrows, and horses, and cows, and oxen, and cultivated lands, and houses, and mills, is, and has as invariably been the companion, and the cause, of freedom.