“Are the souls of your children of no Value?”: Early American Instructions for Parents and Their Children

Within the most recent release of new material from Early American Imprints, Series I, Supplement from the American Antiquarian Society, 1652-1800, are several books meant to be instructive to children and, in some instances, their parents. 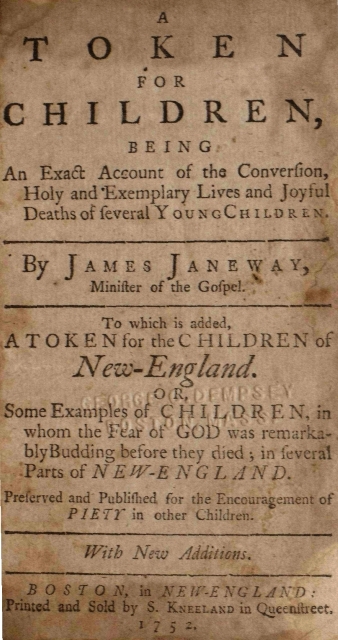 A token for children: being an exact account of the conversion, holy and exemplary lives and joyful deaths of several young children. By James Janeway, Minister of the Gospel; To which is added, A token for the children of New-England. Or, Some examples of children, in whom fear of God was remarkably budding before they died; in several parts of New-England. Preserved and published for the encouragement of piety in other children. With new additions (1752)

The title of this work, first published in 1700, is substantial, and oddly punctuated, but the message seems clear: pious children meet happy deaths. Finding joy in a child’s death may be a formidable challenge for contemporary society, but the Reverend Janeway (1636?-1674) is insistent upon it and upon instilling in children this hard lesson.

I. Take heed of what you know is naught: As Lying; O that is a grievous Fault indeed, and naughty Words, and taking the Lord’s Name in vain, and playing upon the Lord’s Day, and keeping bad Company, and playing with ungodly Children: But if you go to school with such, tell them, that God will not love them, but the devil will have them, if they continue to be so naught.

There follow stories that serve as examples for those children who would “escape Hell-fire” and aspire to Heaven.

The looking-glass for the mind; or intellectual mirror: Being an elegant collection of the most delightful little stories, and interesting tales, chiefly translated from that much-admired work, L’Ami des enfans [sic] (1795) 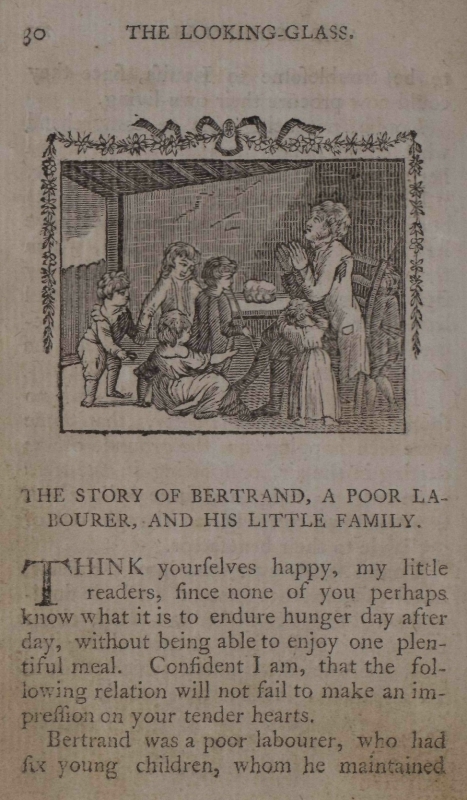 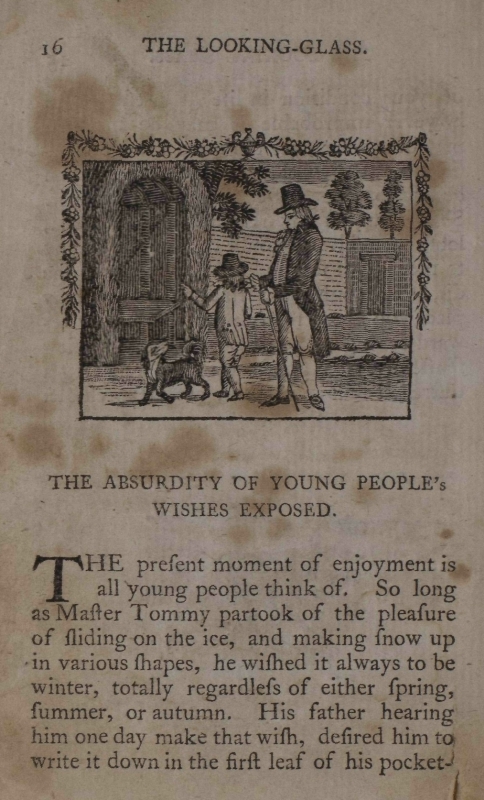 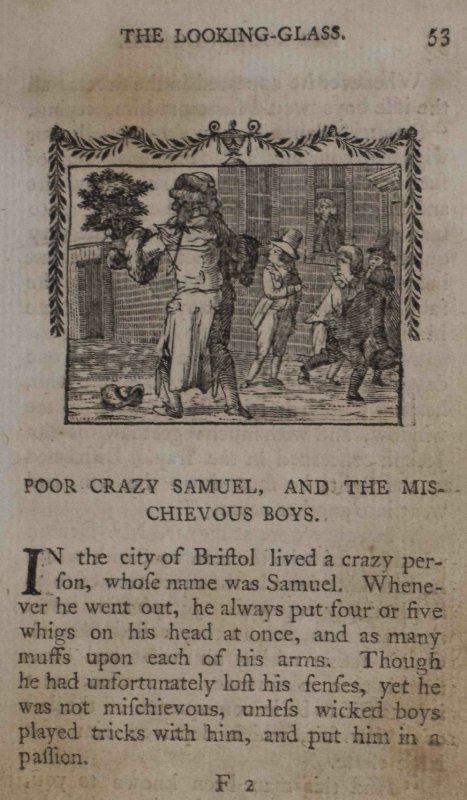 More than a century later than Reverend Janeway, M. (Arnaud) Berquin published this collection in French, his native language. Here we have an English translation which is described in the preface:

The Stories here collected are of the most interesting Kind, since Virtue is constantly represented as the Fountain of Happiness, and Vice as the Source of every Evil. Nothing extravagant or romantic will be found in these Tales, neither enchanted Castles, nor supernatural Agents, but such Scenes are exhibited as come within the Reach of the Observations of young People in common Life, the Whole being made familiar by an innocent Turn of Thought and Expression, and applied to describe their Amusements, their Pursuits, and their Necessities.

Perhaps it is M. Berquin’s French sensibility, or simply a function of its later era, but unlike Reverend Janeway’s terrifying threats and admonitions, this collection of stories is described…

As a useful and instructive Pocket Looking-Glass, we recommend it to the Inspection of every Youth, whether Miss or Master? it is a Mirror that will not flatter them, nor lead them into Error; it displays the Follies and improper Persuits [sic] of the youthful Breast, points out the dangerous Paths they sometimes tread, and clears the Way to the Temple of Honour and Fame.

Morally instructive but absent threats of damnation and eternal agony, it is altogether a gentler guide for youth. The Table of Contents reveals a sense of the stories within and includes such charming examples as Anabella’s journey to market, Louisa’s tenderness to the little birds in winter, Flora and her little lamb, and Clarissa, or the grateful orphan. There are some sterner sounding, more morally demanding stories, including Mischief is its own punishment; Cleopatra, or the reformed little tyrant; The destructive consequences of dissipation and luxury; and The covetous boy, but all ends well with the final tale, Grey hairs made happy. 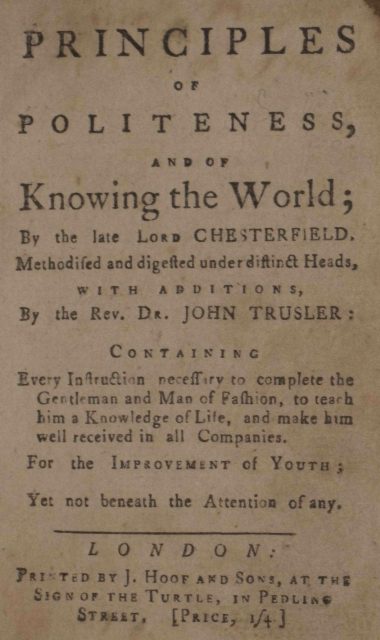 Principles of politeness, and of knowing the world; by the late Lord Chesterfield; Methodised and digested under distinct heads, with additions, by the Rev. Dr. John Trusler; containing: every instruction necessary to complete the gentleman and man of fashion, to teach him a knowledge of life, and make him well received in all companies; For the improvement of youth; yet not beneath the attention of any (Norwich, Conn.: Printed by John Trumbull], [1783?])

As a departure from terrifying children or gently admonishing them, we turn to instructions meant to educate young adults, and all others in need of guidance, in the important matter of etiquette. In his preface, editor reverend Doctor Trusler refers to Lord Chesterfield as “having been universally allowed, to be one of the best-bred men of the age” which is why he has carefully read the nobleman’s letters to his son and from them “has diligently selected every observation and remark, that can possibly improve or inform the mind, within the rules of morality.” With discretion Trusler adds, “Much might have been said on the subject of indelicacy, but as instructions on that head, to persons possessed of a liberal education, must have been unnecessary, they are here purposely omitted.”

Trusler begins by exploring Chesterfield’s remarks on “Modesty [which] is a polite accomplishment, and generally an attendant upon merit: It is engaging to the highest degree, and wins the heart of all our acquaintance. On the contrary, none are more disgusting in company than the impudent and presuming.” He encourages appropriate modesty which does not deny one’s accomplishments but encourages consideration and interest in others. “An impudent fellow lugs in himself abruptly upon all occasions, and is ever the hero of his own story.” After a short disquisition on the clever ways men may seek to appear modest while being anything but, Trusler concludes by quoting Chesterfield:

To avoid contempt, therefore, never speak of yourself at all, unless necessity obliges you; and even then, take care to do it in such a manner, that it may not be construed into fishing for applause. Whatever perfections you may have, be assured, people will find them out; but whether they do or not, nobody will take them upon your own word. The less you say of yourself, the more the world will give you credit for; and the more you say, the less they will believe you.

In this book-length treatise, the subjects that are discussed are wide-ranging. Examples of specific topics include lying, breeding, and genteel carriage:

Next to good breeding is a genteel manner and carriage, wholly free from those ill habits and awkward actions, which many very worthy persons are addicted to. A genteel manner of behaviour, how trifling it may seem, is of the utmost consequence in private life. Men of very inferior parts have been esteemed, merely for their genteel carriage and good breeding, while sensible men have given disgust for want of it.

This last serves as a democratizing leveler, for Chesterfield does not limit his advice to the high-born alone. Rather, he lays out a guide to etiquette and personal comportment that is available to any man sensible enough to heed his cautions.