“Bullets, Bayonets, and the Loud-Mouthed Cannon”: Highlights from The American Slavery Collection, 1820-1922

“Bullets, Bayonets, and the Loud-Mouthed Cannon”: Highlights from The American Slavery Collection, 1820-1922

The April release of The American Slavery Collection, 1820-1922: From the American Antiquarian Society includes an Englishman’s perspective on the slave trade, opposition to the Fugitive Slave Law from both sides of the Atlantic, and a speech before the House of Representatives urging the abolition of slavery in the District of Columbia. 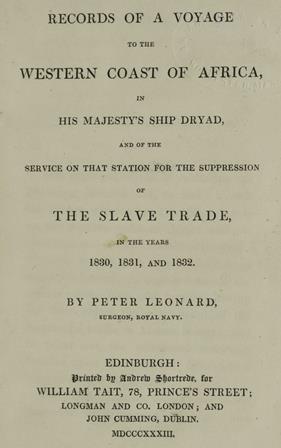 In 1830, His Majesty’s frigate the Dryad set sail as part of a British “naval force employed on the African station for the suppression of the slave trade.” Peter Leonard, the author of this work, served as the ship’s surgeon and upon his return to England in 1832 wrote about his experiences. He aimed “to make known the horrors which attend the Slave Trade…[and] to expose some of the defects of the laws and treaties, having for their object the suppression of the disgraceful traffic in human beings…”

…that the aboriginal inhabitants of Africa continue to be forcibly dragged from their homes; and…sold as any other commodity might be, and lorded over by their miscalled Christian brethren of creation, because, forsooth, their physical and moral perception has not been furbished by the chicanery and cunning of artificial society, and because, in them, the “human face divine” happens to be of a darker shade, and their facial angle less accordant with our ideas of symmetry and fair proportion.

American Slavery: Report of a Meeting of Members of the Unitarian Body (1851)

On June 13, 1851, a special meeting of the Unitarian Association was held “to deliberate on the duty of English Unitarians in reference to Slavery in the United States, and to adopt such resolutions as the occasion may demand.” Of the resolutions unanimously adopted, the first was in response to the Fugitive Slave Act. It stated:

That this Meeting desires to express its sorrow at the present fearful attitude, morally and politically, of the Slavery question in America, and its sympathy with our brethren in the trying conflict between conscience and law, the commands of God and those of man, in which the recent enactment of the Fugitive Slave Bill has compelled every inhabitant of the Free States to take part. And while earnestly hoping that all preachers and professors of what we deem the purest form of Christianity may be guided and supported in proving its truth and practical efficacy by their prominence in depriving the iniquitous institution of Slavery of the sanction it has hitherto received from the churches of America, the Meeting declares its grateful appreciation of those courageous Unitarian ministers who, undeterred by danger and obloquy, have by their spoken or written words, vindicated the rights of their oppressed and suffering countrymen.

The Boston Slave Riot, and Trial of Anthony Burns (1854)

In 1854, abolitionists in Boston met “to secure justice for a man claimed as a slave by a Virginia kidnapper, and imprisoned in Boston Court House, in defiance of the laws of Massachusetts.”  The man, Anthony Burns, had escaped slavery in Virginia and traveled to Massachusetts where he worked for a clothing dealer. Just days before his twentieth birthday, Burns was arrested under orders of a U.S. Marshal.

After much discussion, the meeting was interrupted by word of an attempt to rescue Burns from the court house: 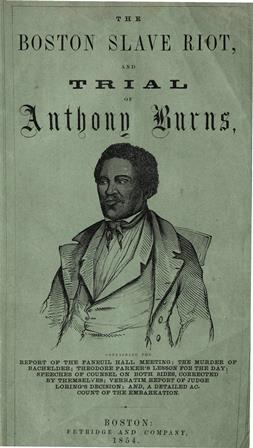 he crowd moved from Faneuil Hall to the Court House, and halting on the East side endeavored to force the door on that part of the building, but failing in their attempt they ran round to the door on the West side…and proceeded with a long plank, which they used as a battering-ram, and two axes to break in and force the entrance….The battering-ram was manned by a dozen or fourteen men, white and colored, who plunged it against the door, until it was stove in. Meantime, several brickbats had been thrown at the windows, and the glass rattled in all directions. The leaders, or those who appeared to act as ringleaders in the melee, continually shouted: “Rescue him!” “Bring him out!” “Where is he!” &c. &c. The Court House bell rung an alarm at half past nine o’clock. At this point reports of pistols were heard in the crowd, and firearms, we understand, were used by those within the building, but whether loaded with ball or not we cannot say. During the struggle some thirty shots were fired by rioters, and the most intense excitement prevailed.

The court found in favor of Burns' owner, and Burns was ordered back to slavery in Virginia. The decision generated support for the abolitionist movement across the North, and by 1857 activists in Boston had raised $1,300 to purchase Burns's freedom. Amos Adams Lawrence, an important figure in the national abolitionist movement, summarized the impact of the Burns decision this way: “We went to bed one night old-fashioned, conservative, compromise Union Whigs and waked up stark mad Abolitionists.”

Slavery in the District (1862)
Speech of Hon. Harrison Gray Otis Blake, of Ohio, delivered in the House of Representatives, April 11, 1862

Harrison Gray Otis Blake was born in Newfane, Vermont, in 1818. He studied both medicine and law before serving in both houses of Ohio’s legislature, as Representative of Ohio’s 14th district in the 36th and 37th Congresses, and as a colonel in the 166th Ohio Infantry during the Civil War. Arguing before the 37th Congress for the abolition of slavery in Washington, D.C., Vermont’s native son did not mince his words: 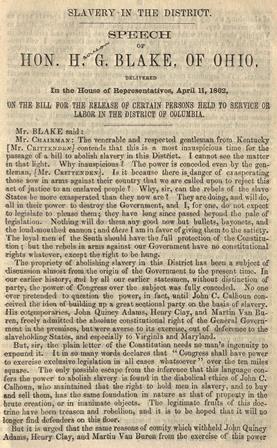 he venerable and respected gentleman from Kentucky [Mr. Crittenden] contends that this is a most inauspicious time for the passage of a bill to abolish slavery in this District. I cannot see the matter in that light. Why inauspicious? The power is conceded even by the gentleman [Mr. Crittenden]. Is it because there is danger of exasperating those now in arms against their country that we are called upon to reject this act of justice to an enslaved people? Why, sir, can the rebels of the slave States be more exasperated than they now are? They are doing, and will do, all in their power to destroy the Government, and I, for one, do not expect to legislate to please them; they have long since passed beyond the pale of legislation. Nothing will do them any good now but bullets, bayonets, and the loud-mouthed cannon; and these I am in favor of giving them to their satiety. The loyal men of the South should have the full protection of the Constitution; but the rebels in arms against our Government have no constitutional rights whatever, except the right to be hung.