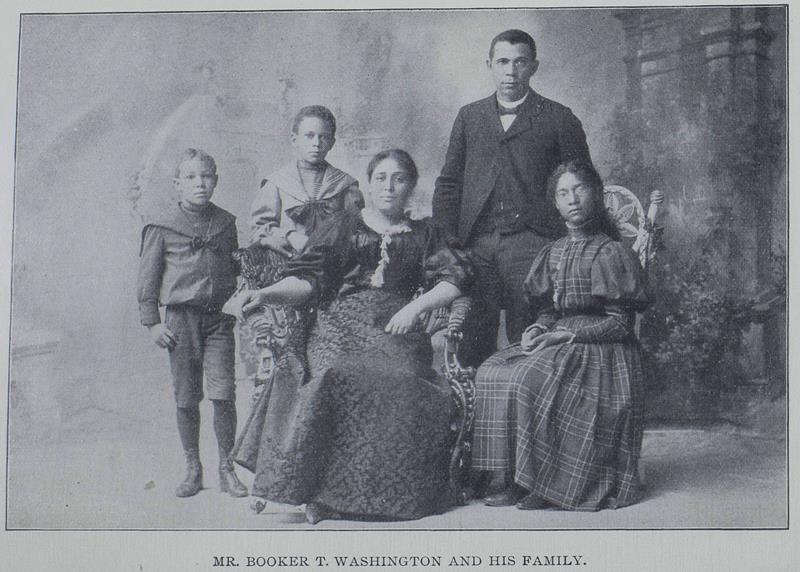 Booker Taliaferro Washington was an educator, author, orator, unofficial advisor to Presidents Roosevelt and Taft, and one of the most influential African American leaders of the period. Washington was born a slave in Hale’s Ford, Virginia, in 1856, and lived in bondage for his first nine years of life. After learning to read while working in a West Virginia coal mine and several years of part-time schooling, Washington enrolled full-time at the Hampton Institute and graduated in 1875. He spent several years teaching before accepting an offer to start a new school in Tuskegee, Alabama, where he founded what is today Tuskegee University. He spent much of his life making the university financially viable and academically respected.

The May release of Black Authors, 1556-1922: Imprints from the Library Company of Philadelphia includes several hard-to-find works by Booker T. Washington. Included are the first edition of The Story of My Life and Work, which Washington insisted be altered, and a rare imprint of a speech before Congregation Rodef Shalom in Pittsburgh, Pennsylvania. 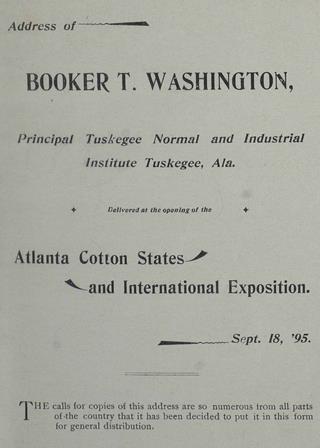 On September 18, 1895, Booker T. Washington spoke at the opening of the Atlanta Cotton States and International Exposition and announced the Atlanta Compromise. The compromise had been made between African-American leaders and Southern white leaders. It established that Southern African-Americans would work, receive basic education, and enjoy due process in law, but would submit to white political rule and observe a separate—whether equal or not—social status.

Washington spoke of the mutual economic benefits both groups would appreciate through this approach, saying:

To those of the white race who look…for the prosperity of the South, were I permitted, I would repeat what I say to my own race—“cast down your bucket where you are.” Cast it down among the 8,000,000 Negros whose habits you know, whose fidelity and love you have tested in days when to have proved treacherous meant the ruin of your firesides. Cast down your bucket among these people who have, without strikes and labor wars tilled your fields, cleared your forests, builded your railroads and cities, and brought forth treasures from the bowels of the earth and helped make possible this magnificent representation of the progress of the South. Casting down your bucket among my people, helping and encouraging them as you are doing on these grounds, and to education of head, hand and heart, you will find that they will buy your surplus land, make blossom the waste places in your fields and run your factories.

Washington then offered this reassurance to the white audience:

In all things that are purely social we can be as separate as the fingers, yet one as the hand in all things essential to mutual progress. 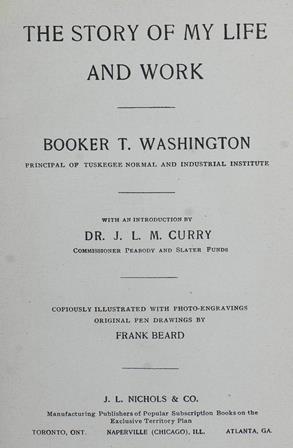 Published in 1900, the first edition of The Story of My Life and Work was ghostwritten by Edgar Webber, a young African American journalist who worked with little oversight from Washington himself. Washington's correspondence, published in the 14-volume Booker T. Washington Papers, reveals that when he saw this work in print he was angry with Webber's numerous errors and casual tone. Washington's ire extended to his publisher who he threatened to sue if distribution was not restricted to the South. He even urged the publisher to sell the book to poor, predominantly African American buyers so that wealthier, more educated readers would not have a chance to condemn the work.

In the second edition, published in 1901, Washington made corrections and removed both this page with Webber's picture and Webber’s name from the index. 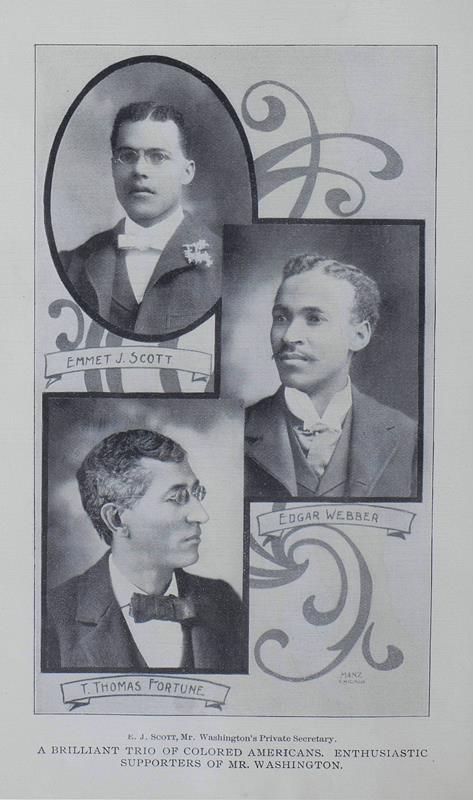 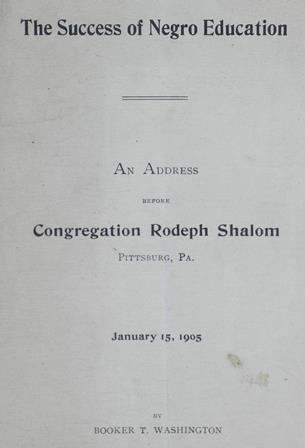 The Success of Negro Education (1905)

In a 1905 speech addressing Pittsburgh’s Congregation Rodef Shalom, Washington began his remarks with an optimistic and slightly sarcastic tone: “Now, it is true that my race has a great many difficulties with which to contend in this country. At the same time it has one or two advantages. Among them I believe that you will find by a careful study of American history that the Negro race is the only one that ever came into America by reason of having a very special, a very pressing and a very emphatic invitation to come here.”

Booker T. Washington was criticized for taking an incremental approach to improving race relations by those espousing immediate and total equality such as W.E.B. Du Bois. Du Bois even accused Washington of “condemning their race to manual labor and perpetual inferiority.” However, Washington continued to find support for his university and validate his approach to better race relations through improved education and eventual upward economic mobility through examples such as this:

Last summer at the Tuskegee Institute upon our farms we produced 1,900 bushels of peaches on land that was bought for two dollars an acre ten years ago. To-day you could not buy one acre of land anywhere near that peach orchard for two hundred dollars an acre. There was scarcely a day during the past summer when those peaches were being harvested when there weren’t five and six white farmers who would come there to learn how the Negroes had produced peaches successfully on a soil and in a climate where they had failed to do it before. And you will find that when a black man can teach the white man to get dollars out of peaches, that there is no color line drawn between them.