“Casting Pearls before Swine” – Highlights from The American Slavery Collection, 1820-1922

The December release of The American Slavery Collection, 1820-1922: From the American Antiquarian Society includes both pro- and anti-slavery perspectives as well as a retrospective view of U.S. slavery at the close of the 19th-century.

Pastor Elijah Barrows prepared this discourse on slavery “with particular reference to the condition of his own church.” He notes that its members were “divided in their views, and disunited in their feelings, on this much agitated subject.”  Hoping to unify his New York congregation in support of abolishing slavery, Barrows begins his argument by drawing attention to Louisiana Code, Article 3:

A slave is one who is in the power of a master to whom he belongs. The master may sell him, dispose of his person, his industry, his labor; he can do nothing, possess nothing, nor acquire any thing but which must belong to his master.

Barrows then takes that definition to a logical and stark conclusion: 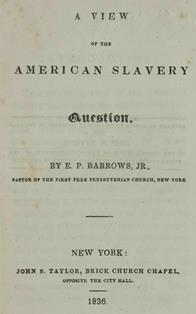 It follows, by natural consequence, that the master claims as his lawful property the offspring of his female slaves, whoever may be their father, upon the same ground that the farmer does the increase of his flocks and herds, viz. that they are his chattels personal. Accordingly the laws of slave-holding states declare that “all the issue and offspring of slaves, born or to be born, shall be and remain for ever hereafter absolute slaves, and shall follow the condition of the mother.”

An Essay on Liberty and Slavery (1856)
By Albert Taylor Bledsoe, Professor of Mathematics at the University of Virginia

If our arguments and views are unsound, we hope he will reject them. On the contrary, if they are correct and well-grounded, we hope he will concur with us in the conclusion, that the institution of slavery, as it exists among us at the South, is founded in political justice, is in accordance with the will of God and the designs of his providence, and is conducive to the highest purest, best interests of mankind.

Bledsoe concluded his first chapter by weighing the public good against his understanding of private liberty:

The true problem, then, is, not how the conflicting claims of these two principles may be adjusted, (for there is no conflict between 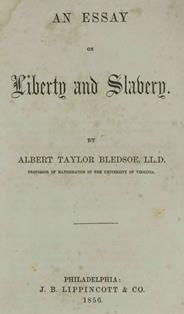 them,) but how a real public order, whose claims are identical with those of private liberty, may be introduced and maintained. The practical solution of this problem, for the heterogeneous population of the South imperatively demands, as we shall endeavor to show, the institution of slavery; and that without such an institution it would be impossible to maintain either a sound public order or a decent private liberty. We shall endeavor to show, that the very laws or institution which is supposed by fanatical declaimers to shut out liberty from the Negro race among us, really shuts out the most frightful license and disorder from society. In one word, we shall endeavor to show that in preaching up liberty to and for the slaves of the South, the abolitionist is “casting pearls before swine,” that can neither comprehend the nature, nor enjoy the blessings, of the freedom which is so officiously thrust upon them. And if the Negro race should be moved by their fiery appeals, it would only be to rend and tear in pieces the fair fabric of American liberty, which, with all its shortcomings and defects, is by far the most beautiful ever yet conceived or constructed by the genius of man.

Slavery in the Methodist Episcopal Church (1859)
By Elias Bowen

Elias Bowen’s concern with the question of American slavery focused on the complicity of his faith and the issue of church-slavery in general. He broached the subject, writing:

Church-slavery has become too serious a matter with us to admit tameness. Our tampering, temporizing, truckling policy has already been pursued quite too long. Its only effect has been to increase and strengthen an evil which, like every other evil, continues to grow and become more and more insolent and uncontrollable the longer it is tolerated and indulged. 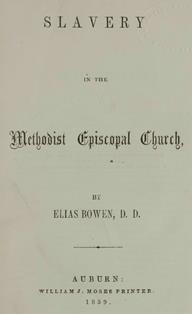 We are not unaware that the undertaking, in itself considered, is exceedingly unpleasant; especially as we feel ourselves called upon to lay open and rebuke the wickedness of the church. We deeply regret that the occasion has arisen. But the issue has been forced upon us, and it must be met. The church having yielded herself up to the slave-power, or become pro-slavery in her administration and government, has placed the subject of slavery beyond the reach of anti-slavery legislation, leaving us of the anti-slavery school no alternative but to arraign her at the bar of public opinion. And to this tribunal she must now be brought. The time has also come when stronger and more decided ground must be taken in our conflict with the slave-power. Slavery, in all its forms and phases – and especially in its legal relation, that damnable source of the whole damnable system – must be reprobated and denounced in the severest terms; and all fellowship with slaveholders must be eschewed and repudiated as a shameful complicity with their unparalleled wickedness. The pulpit and the press must raise the battle-cry of extermination against so horrible an evil, accompanying their declaration of war with correspondent action; and pour forth their denunciations and rebukes “in thoughts that breathe and words that burn.”

Impending Crisis of the South: How to Meet It (1860)
By Hinton Rowan Helper

Hinton Rowan Helper was a Southerner and critic of slavery. He argued slavery not only hurt the prospects of non-slaveholders but also acted as an impediment to the growth of the entire South. Helper explained his perspective: 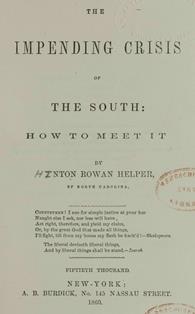 In writing this book, it has been no part of my purpose to cast unmerited opprobrium upon slaveholders, or to display any special friendliness or sympathy for the blacks. I have considered my subject more particularly with reference to its economic aspects as regards the whites – not with reference, except in a very slight degree, to its humanitarian or religious aspects. To the latter side of the question, Northern writers have already done full and timely justice. The genius of the North has also most ably and eloquently discussed the subject in the form of novels. Yankee wives have written the most popular anti-slavery literature of the day. Against this I have nothing to say; it is all well enough for women to give the fictions of slavery; men should give the facts.

In 1898, Irish author Justin Huntly McCarthy wrote this brief history of the United States. It offers an interesting perspective on the nation at the close of the 19th century. On the topic of slavery, he was able to write: 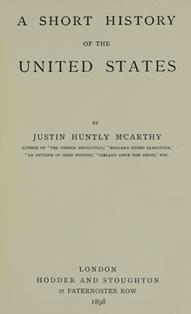 There is happily no need now for any one to be eloquent in protest against negro slavery, because there is no probability of any one being found eloquent in its favor. That question is settled for good and all as far as civilized humanity is concerned. It would be as reasonable to expect a man of intelligence publicly to applaud the political methods of the Old Man of the Mountains and his company of Assassins, as to expect from him any advocacy, any approval, any justification of negro slavery.