In light of the current spectacle of statues of Confederate leaders being removed from the streets of New Orleans in the dead of night by masked workers, here is journalist Lafcadio Hearn commenting upon two other statues in that city in his article “New Orleans in Wet Weather” published in the Cincinnati Commercial on December 22, 1877.

…shortly after my arrival in the city I paid a visit to the venerable statue of Henry Clay, on Canal street. It stands in the center of the grand thoroughfare, and is inclosed (sic) by a railing. On the eastern face of the quadrangular pedestal I observed following inscription, deeply cut into the stone and blacked. At least two-thirds of the inscription had been well nigh erased by the removal of the black pigment of the letters, but the phrase “deepest stain” was wonderfully distinct, and the word “SLAVERY” as black as the changeless skin of the Ethiopian:

“IF I COULD BE INSTRUMENTAL IN ERADICATING THIS DEEPEST STAIN, SLAVERY, FROM THE CHARACTER OF OUR COUNTRY, I WOULD NOT EXCHANGE THE PROUD SATISFACTION OF WHICH I SHOULD ENJOY FOR THE HONORS OF ALL THE TRIUMPHS EVER DECREED TO THE MOST SUCCESSFUL CONQUERORS.—HENRY CLAY.” 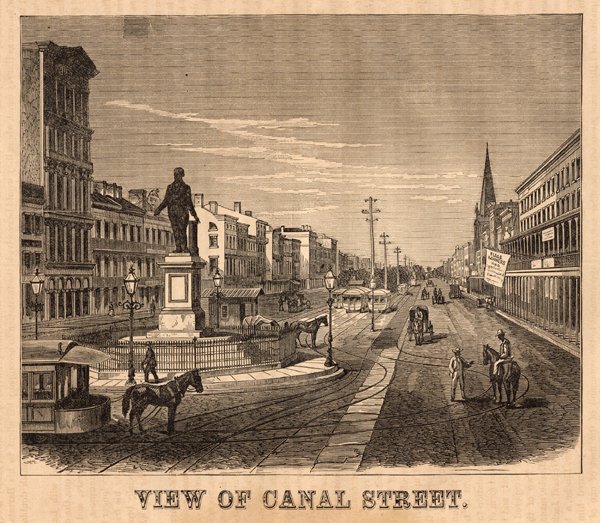 Surely, I said to myself, no Southern man could have aided in the erection of a statue with such an inscription as that. Crossing Canal street, I wandered through the French quarter into Jackson Square, and proceeded to examine the great equestrian statue of Andrew Jackson, erect upon a rampant steed. Upon the eastern face of the stone I beheld characters deeply graven, and I discovered the characters were even these:

“THE UNION MUST AND SHALL BE PRESERVED.” 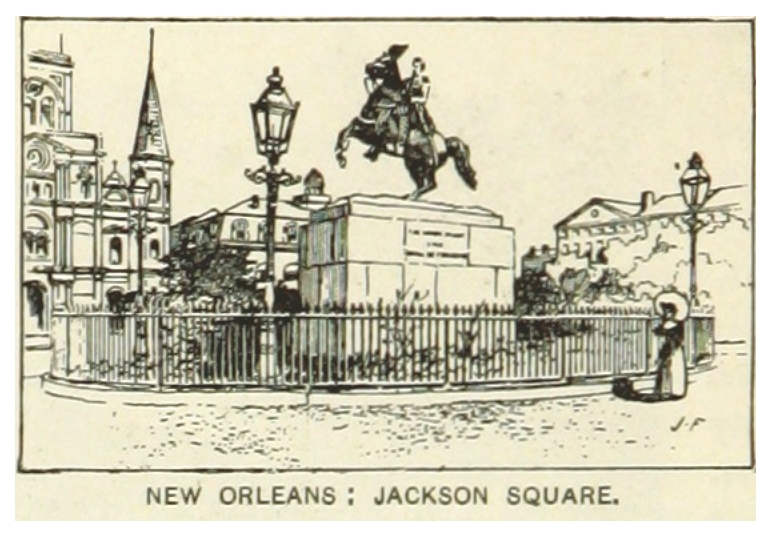 Then I enquired what might be the history of these extraordinary inscriptions and received this pithy, trisyllabic and all-satisfying reply:

It is certainly difficult to imagine what could be the object of thus chiseling the monuments of a conquered people, except that of inflicting petty annoyance, or perhaps, indeed, that of leaving a historical memento of the conqueror’s visitation. It was this ingenuity in discovering acrid blisters for the sorest spots of Southern character that still makes the name of Butler a synonym for abomination in New Orleans.

Beast Butler was Union General Benjamin Butler, who was military governor of New Orleans from May through December of 1862. He was despised for his General Order No. 28, which reads as follows:

As the officers and soldiers of the United States have been subject to repeated insults from the women (calling themselves ladies) of New Orleans in return for the most scrupulous non-interference and courtesy on our part, it is ordered that hereafter when any female shall by word, gesture, or movement insult or show contempt for any officer or soldier of the United States she shall be regarded and held liable to be treated as a woman of the town plying her avocation.

The phrase “woman of the town plying her avocation” meant to consider the woman a prostitute. Butler would later claim that this order did result in better treatment for his officers and men from the women of New Orleans. Butler took a variety of other actions while there that led many citizens of New Orleans to hate him.