The October release of Afro-Americana Imprints, 1535-1922: From the Library Company of Philadelphia includes the autobiography of an African prince; an account by an African American missionary, sailor, and minister; and an early 19th-century murder mystery. 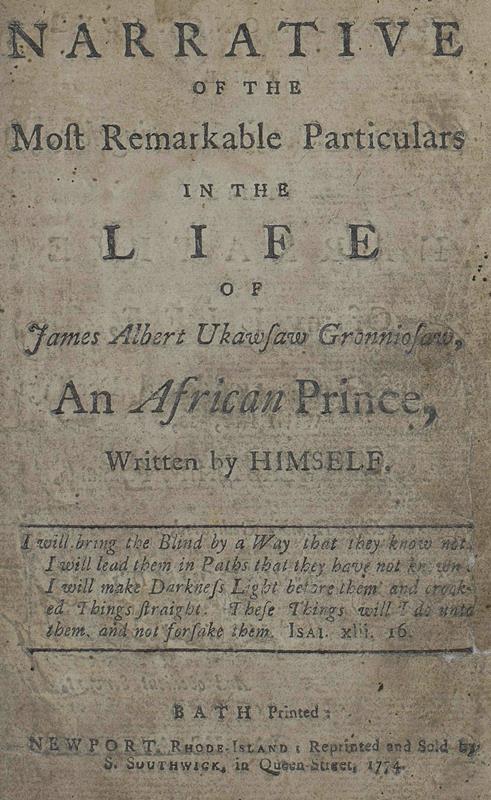 A Narrative of the Most Remarkable Particulars in the Life of James Albert Ukawsaw Gronniosaw: An African Prince (1774)

James Albert Ukawsaw Gronniosaw’s own Narrative was the only major source of his life story until an obituary dated October 2, 1775, was uncovered in a U.K. newspaper:

On Thursday died, in this city, aged 70, James Albert Ukawsaw Gronniosaw, an African prince, of Zoara. He left the country in the early part of his life, with a view to acquire proper notions of the Divine Being, and the worship due to Him. He met with many trials and embarrassments, was much afflicted and persecuted. His last moments exhibited that cheerful serenity which, at such a time, is the certain effect of a thorough conviction of the great truths of Christianity. He published a narrative of his life.

Gronniosaw’s “trials and embarrassments” included being sold into slavery and brought to New York via Barbados where he was sold again. He would eventually gain his freedom, serve in Martinique and Cuba as a soldier in the British army, and, upon his discharge, cross the Atlantic to England. Gronniosaw’s slave narrative is thought to be the first autobiography published by an African in Britain. He begins his chronicle by describing his early life and inquisitive nature:

I was born in the city of Baurnou, my mother was the eldest daughter of the reigning King there. I was the youngest of six children, and particularly loved by my mother, and my grand-father almost doted on me.

I had, from my infancy, a curious turn of mind; was more grave and reserved, in my disposition, than either of my brothers and sisters, I often teased them with questions they could not answer; for which reason they disliked me, as they supposed that I was either foolish or insane.

Still early in life, Gronniosaw questioned his mother about the origin of mankind:

I then inquired how all our people came? She answered me, from one another; and so carried me to many generations back.—Then says I, who made the first man? And who made the first cow, and the first lion, and where doest the fly come from, as no one make him? My mother seemed in great trouble; she was apprehensive that my senses were impaired, or that I was foolish. My father came in, and seeing her in grief asked the cause, but when she related our conversation to him he was exceedingly angry with me, and told me he would punish me severely if ever I was so troublesome again…

Soon after this exchange, and with the consent of his family, Gronniosaw travelled to the Gold Coast with an ivory merchant who would sell him into slavery, thus beginning his odyssey. 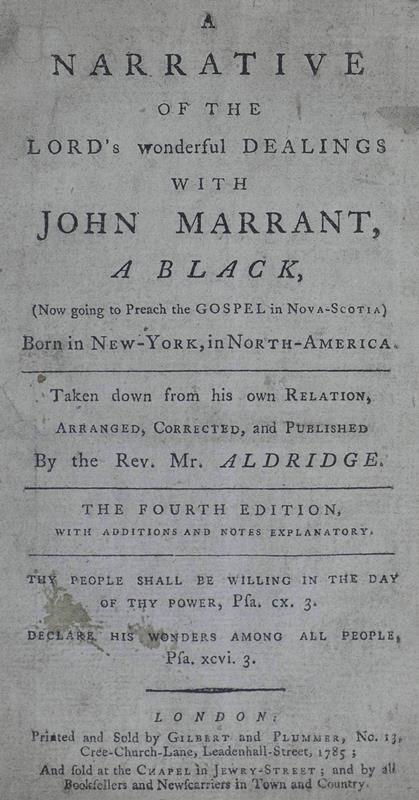 A Narrative of the Lord's Wonderful Dealings with John Marrant, a Black (1785)

Born in New York City in 1755, John Marrant would become one of the nation’s first African American preachers and missionaries. He writes of living as a missionary with Cherokees for two years, continuing his missionary work with slaves in Charleston until the American Revolution, and being impressed into the Royal Navy.

Marrant’s narrative was “taken down from his own relation, arranged, corrected, and published by the Rev. Mr. Aldridge.” Aldridge also penned the preface in which he includes his editorial opinion before vowing to the reader of the veracity of Marrant’s incredible claims:

The following Narrative is as plain and artless, as it is surprising and extraordinary. Plausible reasonings may amuse and delight, but facts, and facts like these, strike, are felt, and go home to the heart….

The novelty or magnitude of the facts contained in the following pages, may dispose some readers to question the truth of them. My answer to such is,—1. I believe it is clear to great numbers, and to some competent judges, that God is with the subject of them…—2. I have observed him to pay a conscientious regard to his word.—3. He appeared to me to feel most sensibly, when he related those parts of his Narrative, which describe his happiest moments with God, or the most remarkable interpositions of Divine Providence for him; and I have no reason to believe it was counterfeited.

I have always preserved Mr. Marrant’s ideas, tho’ I could not his language; no more alterations, however, have been made, than were thought necessary.

The necessity for such an assurance of truth becomes clear when reading about Marrant’s deft evasion from execution or his brush with and salvation from sharks, including “one of an enormous size, that could easily have taken me into his mouth at once.” 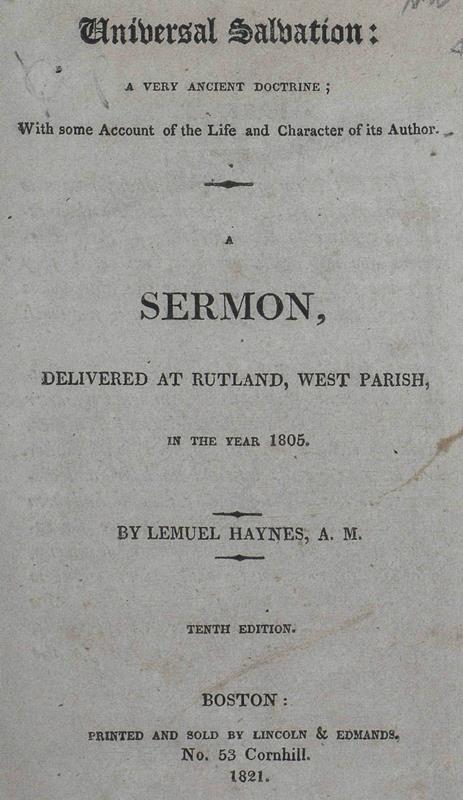 Mystery Developed; or, Russell Colvin, (Supposed to be Murdered,) in Full Life: And Stephen and Jesse Boorn, (His Convicted Murderers,) Rescued from Ignominious Death by Wonderful Discoveries (1820)

Lemuel Haynes was born in West Hartford, Connecticut, in 1753 to an interracial couple who gave him over to indentured servitude while he was still an infant. During his servitude, largely spent as an agricultural laborer, Haynes attended religious services with his masters and was introduced to Calvinism. He accepted Christianity as a young man after witnessing the Aurora Borealis which he interpreted as the approach of the Day of Judgment.

In 1774 Haynes was freed from servitude and joined the minutemen of Granville, Connecticut, with whom he marched to Massachusetts following the Battles of Lexington and Concord. After the northern campaign of the American Revolution, Haynes moved to Vermont and became a Calvinist minister and abolitionist. He opposed his fellow abolitionists who argued for slave repatriation to Africa. Haynes instead argued that God’s plan included an end to slavery that would lead to a successful integration of the races.

Haynes wrote extensively, but not exclusively, about scripture, abolitionism, and republicanism. In 1820, he penned an account of a local murder mystery to which is attached this introductory publisher’s note:

The unusual excitement of the public feeling, in consequence of the recent conviction of Stephen and Jesse Boorn, for the murder of Russell Colvin, more than seven years since—the discovery of Colvin, in full life—his return to the place where his mouldering bones were supposed to be discovered, and the narrow escape of the Boorns from ignominious death, induced the publisher to resort to the most authentic sources of intelligence to obtain all the light that was possible, upon a subject enveloped in doubt, darkness and mystery. The highly respected and reverend clergyman, of Manchester, Vt. (the scene of this mystery,) has furnished, what the publisher ventures to pronounce, altogether the most satisfactory account of these strange occurrences.

The impressive discourse delivered upon the return of Colvin, and the happy rescue of his supposed murderers from impending death, will be read with interest by all.