“Every country has its myths”: Selections from Afro-Americana Imprints, 1535-1922

The May release of Afro-Americana Imprints, 1535-1922: From the Library Company of Philadelphia includes a pair of perspectives on the customs of peoples of West Africa, works by Jules Verne on African travel, replete with richly detailed illustrations, and much more.

Trade and Travels in the Gulph of Guinea, Western Africa, with an Account of the Manners, Habits, Customs, and Religion of the Inhabitants (1851) 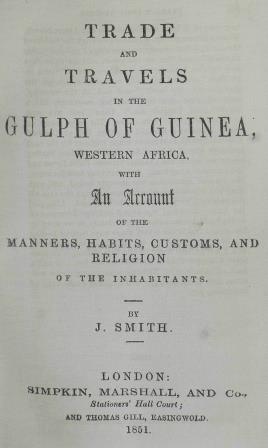 John Smith was a 19th-century surgeon and trading captain “to one of the first mercantile houses in England.” Smith made several voyages to West Africa where he came into “contact with a great number of the inhabitants” and “witnessed some extraordinary scenes.”

Though well-traveled, Smith’s own cultural assumptions are prominent in his account. In explaining his focus on a single West African country, Smith writes, “the inhabitants of one nation…will really include a description of many others, inasmuch as those different barbarous countries on the West Coast very nearly resemble each other in their customs, morals, and manners.”

The author regrets the occasion of some coarse expressions and allusions to be found in this work; but, as the people he gives an account of are in so debased a state as to render the conveying anything like a correct notion of them otherwise, impossible, he deems any farther apology unnecessary.

Smith’s cultural bias, in this case specifically his religious belief, is also displayed in the introduction to a chapter on myths:

Every country has its myths. The mind of man, unacquainted with divine revelation, and thirsting after knowledge and the marvelous, has ever been prone to invent myths, accounting for the origin of the world, of man, and the variety of his species.

Regardless of these shortcomings, Smith’s intriguing report covers many topics including both chilling descriptions of human sacrifice and the slave trade as well as a fantastic explanation of why “one half the world be white men, and the other half black men.” 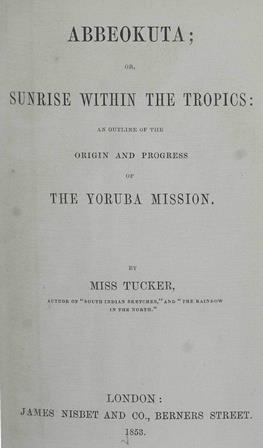 Abbeokuta; or, Sunrise within the Tropics: An Outline of the Origin and Progress of the Yoruba Mission (1853)

Sarah Tucker was a British author, educator, and missionary. Although physically challenged and confined to her room in England, she had a global reach. Moved by reports of the appalling condition of illiterate women in India, Tucker and friends raised money to found a training school for teachers in south India. The institution exists today under the name Sarah Tucker College.

Tucker’s concerns extended to the deplorable treatment of enslaved Africans. She recounts a conversation between two men about the slave trade and its effects:

He drew a picture of the misery it was even then causing in the Iboe country itself–the desolating wars, the separation of parents and children, the ruined villages, the uncultivated fields, the want of confidence between man and man; then referring to his own experience, he described the sufferings of himself and two hundred other boys on their way from the interior to the coast; told of many that had died from hunger and fatigue, of others that had been offered up as sacrifices by the king of Bonny….He spoke of the slave-ship in which he had been embarked, of the bad provisions, the want of water, the crowded hold, the deaths of many, and the throwing overboard of some still alive, who were considered past recovery… 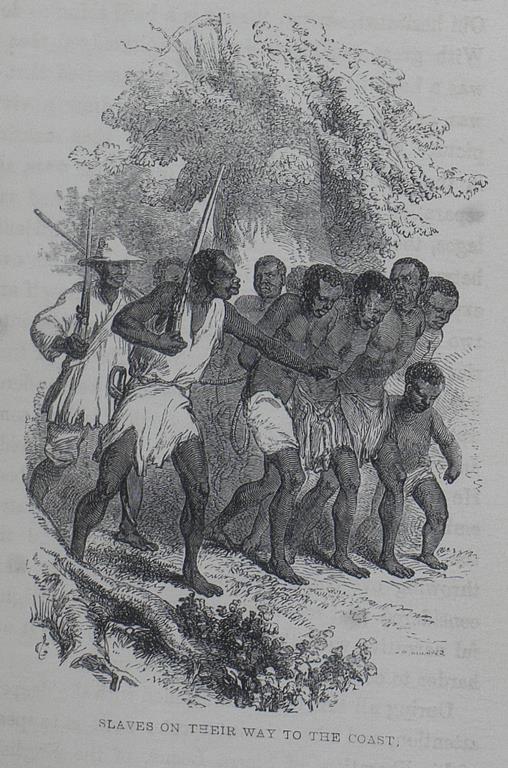 Tucker did not limit herself to writing an anti-slavery tract. She also includes reports on local figures who are both universal and unique, such as this town crier: 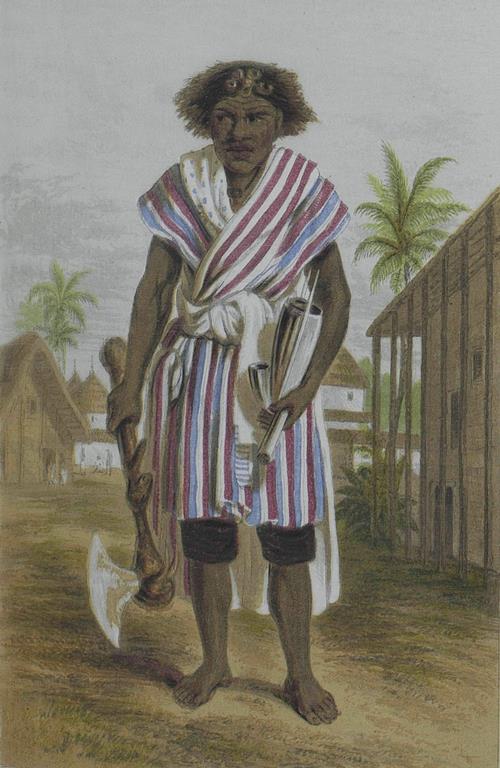 We have been kindly favoured with a sketch of this man taken from the life, and are thus enabled to give our readers some idea of his wild yet not unpicturesque appearance. He is tall and large, and the peculiarity of his costume is increased by a head-dress of black monkey’s skin, ornamented with metal rings and a coin. The cloths that are folded round him are of native manufacture, and striped with various colours. In one hand he holds his bell and the stick with which he strikes it, and in the other is a very suspicious-looking axe. 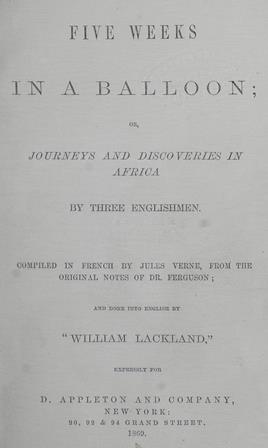 Although any discussion about early science fiction would be incomplete without mentioning Jules Verne, it can also be said that a discussion of Jules Verne’s work as purely science fiction would also be incomplete. Speaking about Five Weeks in a Balloon, Verne said he wrote it “not as a story about ballooning, but as a story about Africa....I may say that at the time I wrote the novel, as now, I had no faith in the possibility of ever steering balloons...”

This sentiment is reiterated in the Publisher’s Note from Five Weeks in a Balloon.

‘Five Weeks in a Balloon’ is...a satire on English books of African travel. So far as the geography, the inhabitants, the animals, and the features of the countries the travelers pass over, are described, it is entirely accurate…The mode of locomotion is, of course, purely imaginary, and the incidents and adventures fictitious. The latter are abundantly amusing, and, in view of the wonderful ‘travelers’ tales’ with which we have been entertained by African explorers, they can scarcely be considered extravagant… 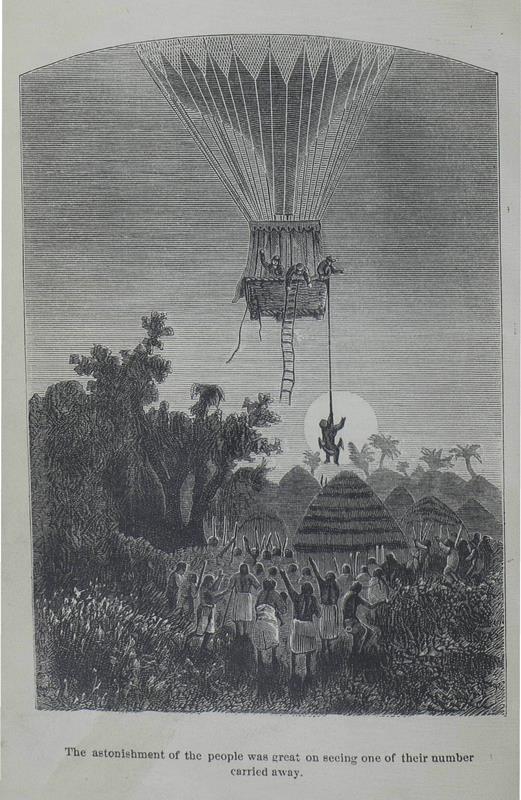