The May release of The American Slavery Collection, 1820-1922: From the American Antiquarian Society features several items offering a diverse set of abolitionist arguments. These range from appeals to faith, to the Declaration of Independence, and to the overall framework of American government. Among the other items in this month’s release are a rare collection of anti-slavery songs for the harp and—perhaps rarer—a call for compromise in American politics. 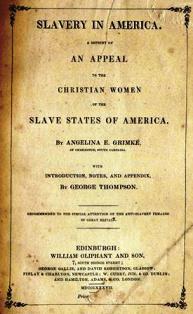 Slavery in America: A Reprint of an Appeal to the Christian Women of the Slave States of America (1837)
By Angelina E. Grimké

Angelina E. Grimké was a prominent abolitionist and women’s rights advocate; in 1838 she became the first woman in the United States to address a legislative body. This 1837 appeal is unique in that it is the only piece of abolitionist writing by a Southern woman to other Southern women. Citing the Declaration of Independence, Grimké reminds her readers of the nation’s founding principles and the paradox created by slavery, writing,

We must come back to the good old doctrine of our forefathers, who declared to the world this self-evident truth, “that all men are created equal, and that they have certain inalienable rights, among which are life, liberty, and the pursuit of happiness.” It is even a greater absurdity to suppose a man can be legally born a slave under our free republican government, than under the petty despotisms of barbarian Africa. If, then, we have no right to enslave an African, surely we can have none to enslave an American.

She also points out the hypocrisy of opposing the international slave trade while supporting the institution nationally.

All that sophistry of argument which has been employed to prove, that, although it is sinful to send to Africa to procure men and women as slaves, who have never been in slavery, that still it is not sinful to keep those in bondage who have come down by inheritance,—will be utterly overthrown. 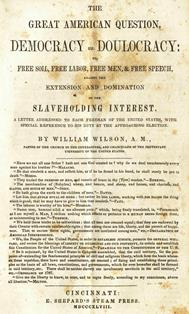 The Great American Question, Democracy vs. Doulocracy: or, Free Soil, Free Labor, Free Men, & Free Speech, Against the Extension and Domination of the Slaveholding Interest (1848)
By William Wilson, A.M., Pastor of the Church of the Covenanters, and chancellor of the Protestant University of the United States

Our national government is democratic—a Representative Democracy. Of this, slavery is the direct and inexorable antagonist. For it would be as easy to conceive, and as proper to speak, of white black, or holy sin, as of democratic slavery!

For Pastor Wilson, slavery was the only issue of import in the 1848 election, writing:

Liberty and slavery, or democracy and doulocracy, are really the only combatants, and must continue to be so until the question is finally decided which of them shall reign on this continent. 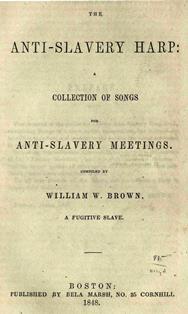 William Wells Brown was born into slavery but escaped and became a prolific abolitionist writer and lecturer. His wonderful collection of anti-slavery songs was compiled to meet the demand for “a cheap anti-slavery song-book, containing songs of a more recent composition.” According to the Brown, “the larger portion of these songs has never before been published; some have never been in print.” The collection ends, fittingly, with “The Flying Slave,”

The night is dark, and keen the air,
And the Slave is flying to be free;
His parting word is one short prayer;
O God, but give me Liberty!
Farewell – farewell;
Behind I leave the whips and chains,
Before me spreads sweet Freedom’s plains.

One star shines in the heavens above,
That guides him on his lonely way;
Star of the North – how deep is love
For thee, thou star of Liberty!
Farewell – farewell;
Behind he leaves the whips and chains,
Before him spreads sweet Freedom’s plains. 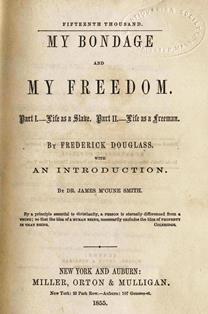 My Bondage and My Freedom (1855)
By Frederick Douglass

The second of three autobiographies by Frederick Douglass, My Bondage and My Freedom is generally considered an expansion of his first work, Narrative of the Life of Frederick Douglass. This volume includes excerpts from Douglass’s speeches as well as a brutally honest letter to his former master, Thomas Auld, which begins,

Sir, The long and intimate, though by no means friendly, relation which unhappily subsisted between you and myself, leads me to hope that you will easily account for the great liberty which I now take in addressing you in this open and public manner. The same fact may possibly remove any disagreeable surprise which you may experience on again finding your name coupled with mine, in any other way than in an advertisement accurately describing my person, and offering a large sum for my arrest. 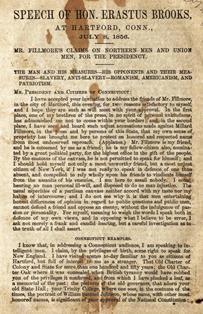 Mr. Fillmore's Claims on Northern Men and Union Men, for the Presidency: The Man and His Measures—His Opponents and Their Measures—Slavery, Anti-Slavery—Romanism, Americanism, and Patriotism (1856)
Speech of Hon. Erastus Brooks, at Hartford, Conn., July 8, 1856

Erastus Brooks’ support of former President Fillmore as the American Party’s nominee for president in 1856 is not only a defense of the Compromise of 1850 but of compromise in general. Putting aside the specific issues of the day, it is hard to imagine Brooks’ approach gaining traction in today’s politics. He argues,

The whole constitution for which we are endeavoring to do battle against sectional men, North and South, was built upon compromise. The “Free Speech,” which was recently struck at in the person of a Senator in Congress; “the freedom of the press,” which we are enjoying even to the excess of licentiousness; “the right of the people to assemble and to petition Congress for a redress of grievances,” are all guarantees of the Constitution of the United States. So is the power, or “right, of the people to keep and bear arms,” and which is declared to be “necessary to the security of a Free State.” The commercial powers which have given us of the East the advantages of the carrying trade; the monetary powers; the making of the slave-trade piracy; and all conflicting powers, were framed and consummated in a spirit of compromise. Without it there would have been no government, and without it there can be no union. It was this spirit of compromise which Washington charged us, in his farewell address, to cherish.