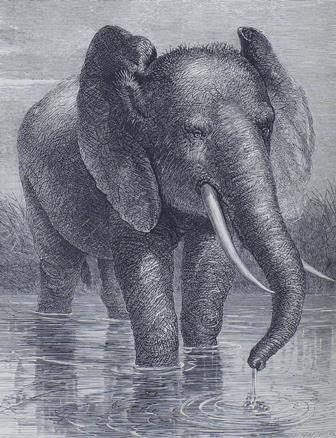 In the first release of African History and Culture, 1540-1921: Imprints from the Library Company of Philadelphia we find a description of a clever lion hunting method utilized in southern Africa, a desperate plea for assistance by a British army officer in northern Africa, and an ethnographic examination of the Twi people of western Africa.

The Lion and the Elephant (1873)
By Charles John Andersson

Born in Sweden, Charles John Andersson is most famous for the books he published about his explorations of Africa. In 1850, Andersson arrived at the Cape of Good Hope and travelled into the interior, intending to reach Lake Ngami in modern-day Namibia. Andersson recorded his travels in Lake Ngami in 1855 and The Okavango River in 1859. In this 1873 volume, The Lion and the Elephant, Andersson describes one method of hunting lion in southern Africa “as ingenious as daring:” 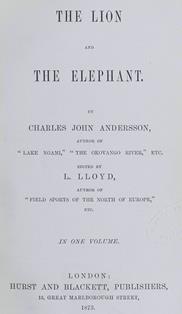 One hunter, “carrying a large shield of a concave form, made of thick buffalo hide, approaches the animal boldly, and hurls at him an assegai, or javelin. The lion bounds on the aggressor, but the man in the meanwhile has thrown himself at full length on the ground, covered by his buckler. Whilst the beast is trying the effect of his claws and teeth on the concave side of the shield, where they make no impression, he loses a favourable opportunity. He redoubles his efforts. And in the meantime the armed men surround him, and pierce his body with numerous assagais, all of which he fancies he receives from the individual lying beneath the shield.

The Journals of Major-Gen. C.G. Gordon, C.B. at Kartoum (1885)
By Charles George Gordon 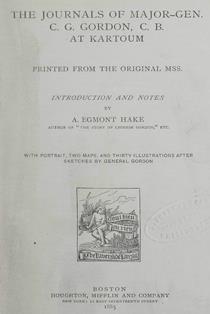 Charles George Gordon, a British army officer and administrator, served in the Crimean War and in China. In the early 1860s Gordon and his forces were instrumental in putting down the Taiping Rebellion. In the 1870s he became the Governor-General of the Sudan before resigning and returning to Europe in 1880. When a revolt broke out in the Sudan, Gordon was called out of retirement and assigned to return to Khartoum to secure the evacuation of soldiers and civilians there.

He evacuated successfully over 2,500 Britons but then defied his orders and organized a city-wide defense that lasted nearly a year. Under public pressure to act, the British government, which had hoped to not become entrenched in the Sudan, reluctantly sent a relief force to assist Gordon. Before the force could arrive though, the city had fallen and Gordon had been killed.

Just over a month before his death, Gordon made the following entry in his journal:

Arabs fired two shells at the Palace this morning; 546 ardebs dhoora! in store; also 83,525 okes of biscuit! 10:30 A.M. The steamers are down at Omdurman, engaging the Arabs, consequently I am on tenterhooks! 11:30 A.M. Steamers returned; the Bordeen was struck by a shell in her battery; we had only one man wounded. We are going to send down the Bordeen to-morrow with this journal. If I was in command of the two hundred men of the Expeditionary Force, which are all that are necessary for the movement, I should stop just below Halfeyeh, and attack the Arabs at that place before I came on here to Kartoum. I should then communicate with the North Fort, and act according to circumstances. Now MARK THIS, if the Expeditionary Force, and I ask for no more than two hundred men, does not come in ten days, the town may fall; and I have done my best for the honour of our country.

This ethnographic examination of the West African Twi people provides extensive descriptions of their primary gods, minor gods, and various other superstitions. The author also describes the remarkable method of the Tshi-tribe to measure time: 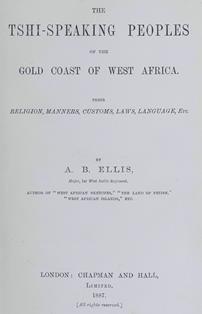 The lunar months are divided into four periods of seven days, which by a peculiar arrangement commence at different hours of the day. These periods are termed n’ehsun, “It is seven”; but, owing to their commencing at different hours, some may have eight days and six nights, others the reverse, and others seven days and nights, with a fractional part of a day or night.

The record of time is kept by the priests, who announce when the time for the annual festivals is at hand, and who have various methods of registering the lapse of time. One will be found mentioned in the description of the Deer Custom...