“Loathing and Contempt” on the Abolitionist Campaign Trail: Highlights from The American Slavery Collection, 1860-1922

The Constitution. A Pro-Slavery Compact: Selections from the Madison Papers, &c. (1844)


In 1844, the American Anti-Slavery Society published a critique of the United States Constitution in which they drew on extracts from James Madison’s reports on the Constitutional Convention, state conventions, and debates of the first Federal Congress to illuminate the inherent contradictions within the Constitution; namely that of codifying the institution of slavery while purporting to “secure the Blessings of Liberty to ourselves and our Posterity.”

These extracts develop most clearly all the details of that “compromise,” which was made between freedom and slavery, in 1787; granting to the slaveholder distinct privileges and protection for his slave property, in return for certain commercial concessions on his part toward the North. They prove also that the Nation at large were fully aware of this bargain at the time, and entered into it willingly and with open eyes.

The society also included extracts from Article 1, Sections 8 and 9, and Article 4, Sections 2 and 4, of the Constitution of the United States: 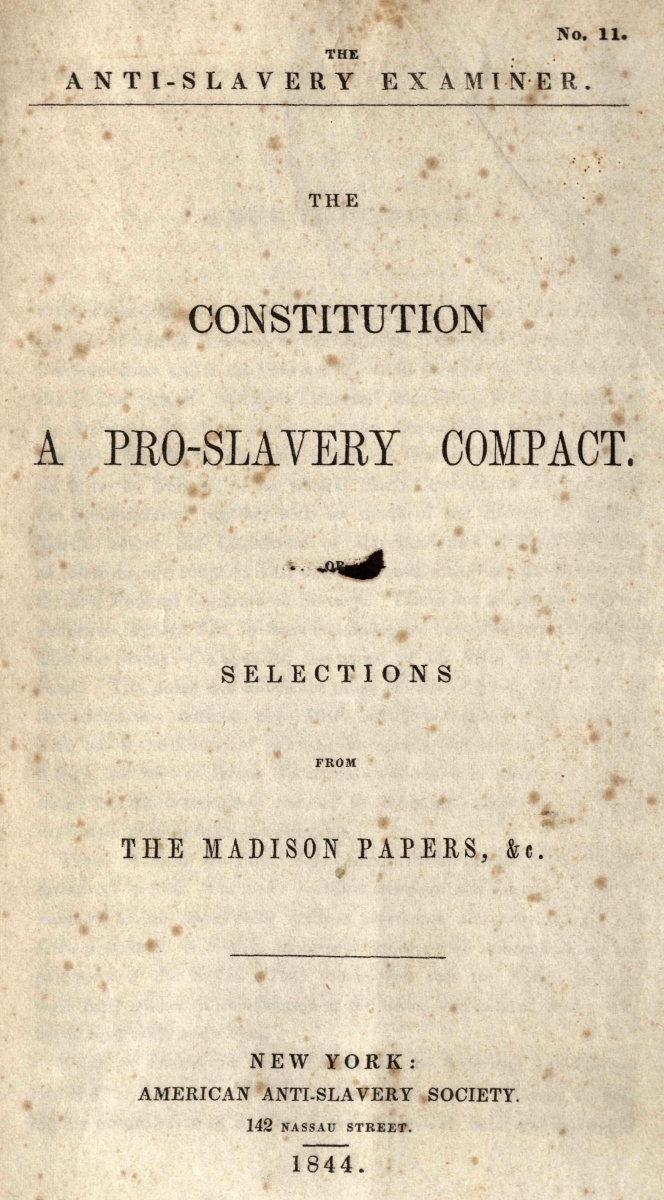 The first of these clauses, relating to representation, confers on a slaveholding community additional political power for every slave held among them, and thus tempts them to continue to uphold the system: the second and the last, relative to insurrection and domestic violence, perfectly innocent in themselves—yet being made with the fact directly in view that slavery exists among us, do deliberately pledge the whole national force against the unhappy slave if he imitate our fathers and resist oppression—thus making us partners in the guilt of sustaining slavery: the third, relating to the slave trade, disgraces the nation by a pledge not to abolish that traffic till after twenty years, without obliging Congress to do so even then, and thus the slave trade may be legalized to-morrow if Congress choose: the fourth is a promise on the part of the whole Nation to return fugitive slaves to their masters, a deed which God’s law expressly condemns and which every noble feeling of our nature repudiates with loathing and contempt. 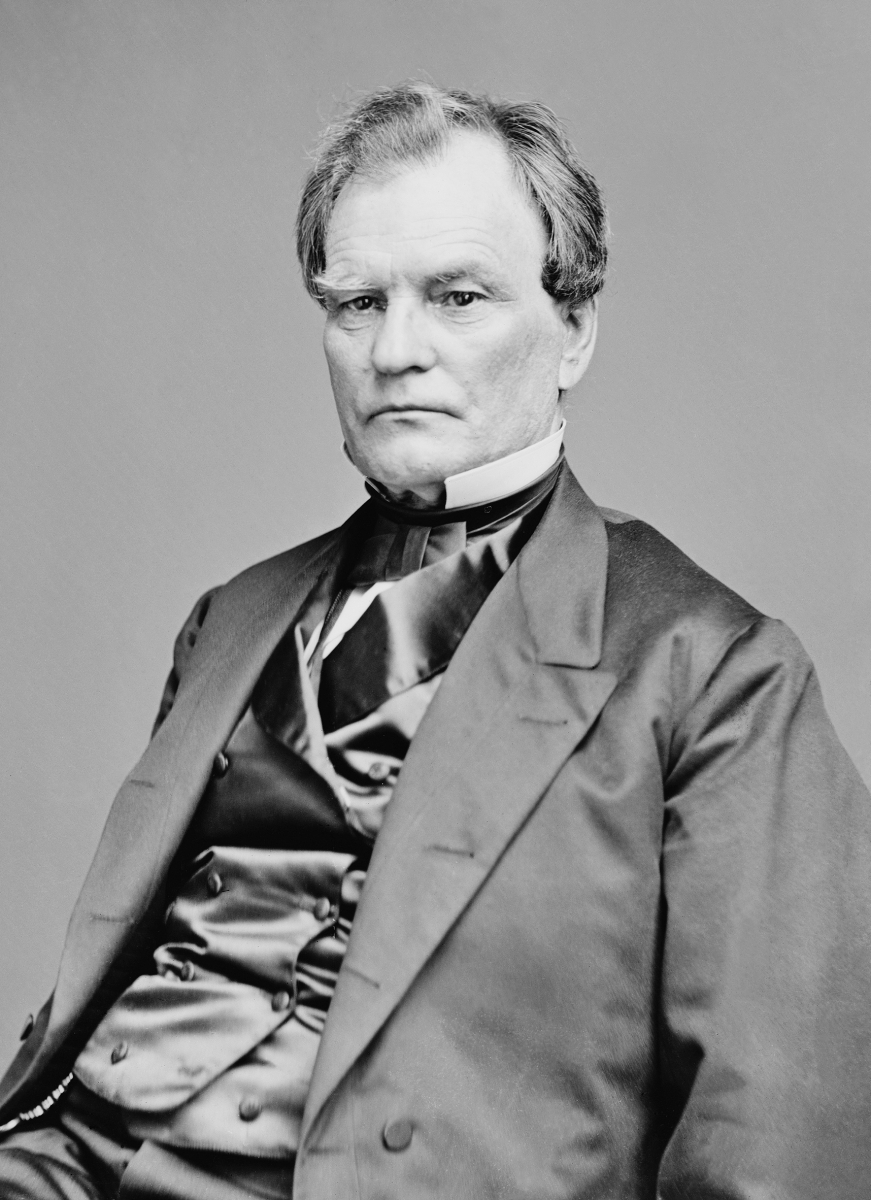 Born in Massachusetts in 1800, the young Benjamin Franklin Wade worked as a laborer on the Erie Canal and as a teacher before studying law in Ohio. Wade was admitted to the bar in 1828 and three years later formed a partnership with Joshua Giddings, a well-known abolitionist and fellow member of the Whig Party. Wade went on to serve both in the Ohio State Senate and from the bench of the state judiciary.

Later Wade joined the new Republican Party and, in 1851, was elected to the United States Senate. In the Senate Wade became one of the most radical politicians of the time; he fought against the Fugitive Slave Act and the Kansas-Nebraska Act, and he supported women’s suffrage, trade union rights, and equality for African-Americans. In an interesting turn of events, had the impeachment of Andrew Johnson in 1868 led to a conviction at trial in the Senate, Wade would have assumed the presidential powers and duties.

In an 1858 speech in the U.S. Senate, Plain Truths for the People, Wade described the political litmus test of the time: 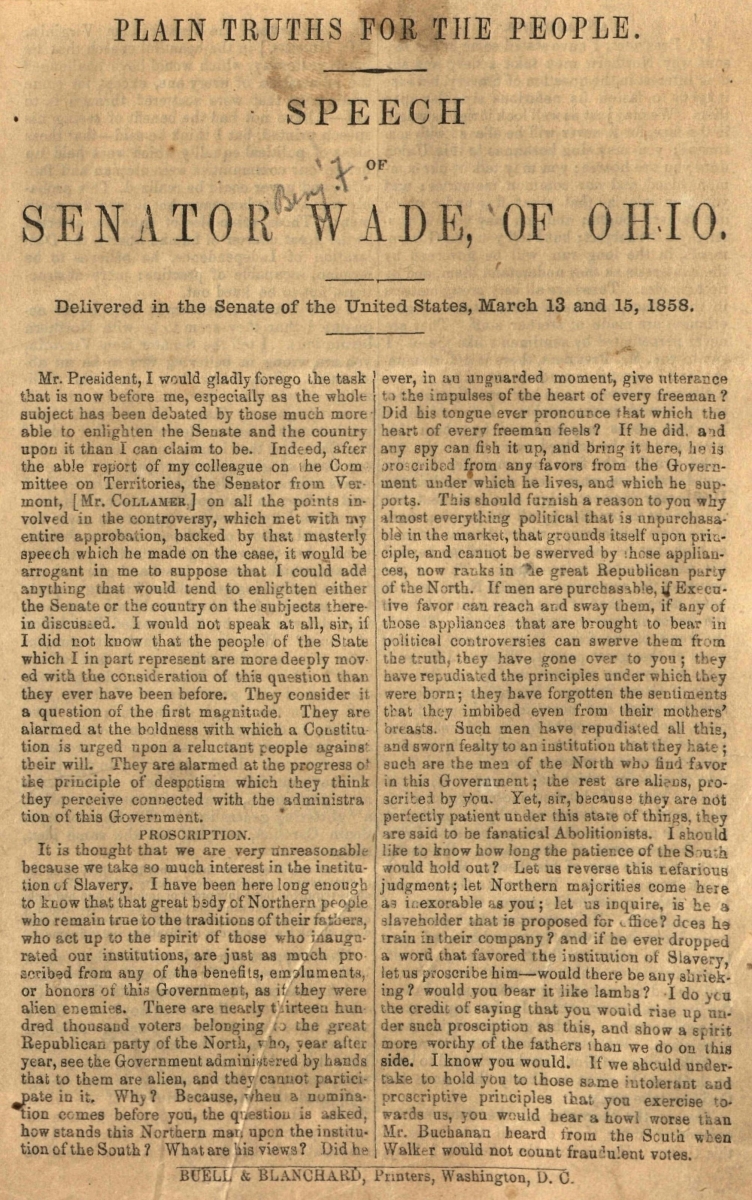 It is thought that we are very unreasonable because we take so much interest in the institution of Slavery. I have been here long enough to know that that great body of Northern people who remain true to the traditions of their fathers, who act up to the spirit of those who inaugurated our institutions, are just as much proscribed from any of the benefits, emoluments, or honors of this Government, as if they were alien enemies. There are nearly thirteen hundred thousand voters belonging to the great Republican party of the North, who, year after year, see the Government administered by hands that to them are alien, and they cannot participate in it. Why? Because, when a nomination comes before you, the question is asked, how stands this Northern man upon the institution of the South? What are his views? Did he ever, in an unguarded moment, give utterance to the impulses of the heart of every freeman? Did his tongue ever pronounce that which the heart of every freeman feels? If he did, and any spy can fish it up, and bring it here, he is proscribed from any favors from the Government under which he lives, and which he supports.

In 1860, Wade delivered a speech titled Property in the Territories in which he decried the hypocrisy of certain Southern gentlemen: 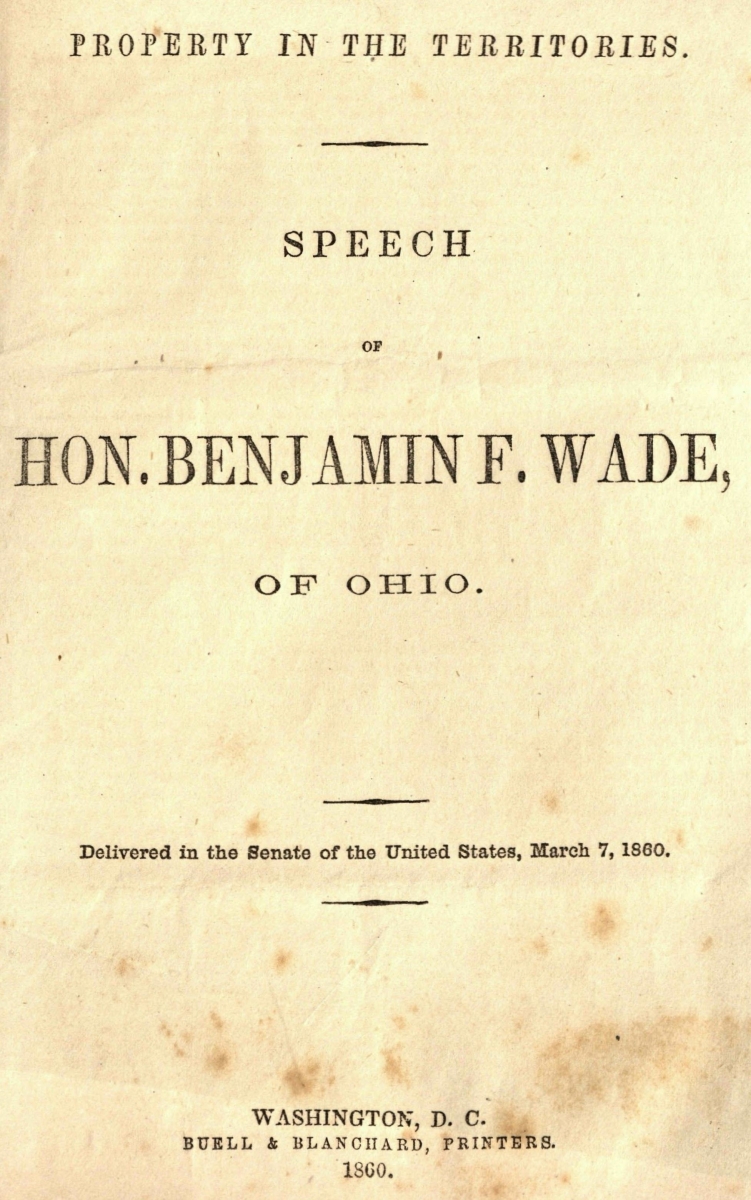 The Senator from Georgia [Mr. Toombs] told us that the South is in possession of eight hundred and fifty thousand square miles of country, the most genial and beautiful that God ever bestowed upon man. He said that he was proud of it; and he has a right to be. He said that this fine region is capable of sustaining a population greater than that of all Europe. I believe that he spoke within bounds….He spoke glowingly of the prosperity of the slaveholding States. What, then, could be more unreasonable and absurd than these whinings and complaints of Northern aggressions and oppressions by the great and prosperous South, when the North is entirely out of power?...Property in slaves was never so prosperous as to-day. Look into the slave market; you will find that slaves never brought higher prices than now. Of course, slave labor is more profitable to the owner now than it has ever been. Sir, these Southern gentlemen are inconsistent and contradictory; in one breath they are all boast and glory, in the next it is all despair and destruction. Please reconcile some of these contradictions.