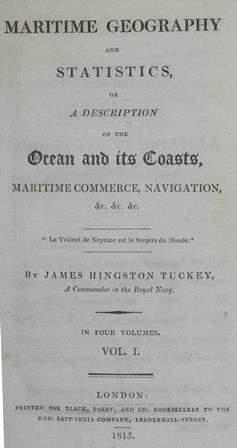 The character of the Moors is by no means engaging; they are cruel, deceitful, and ignorant, and at the same time so proud that they think the sun rises for them alone. “Contemplate that orb,” said a Moor to a Christian slave, “it is unknown in thy country; you have no trees, nor sheep, nor camels, nor sand, nor goats, nor are your women fat like ours.” Their religion is that of Mahomet mixed with paganism, and their language a corrupted Arabic.

These barbarians consider shipwrecked vessels as presents from heaven, enriching themselves by their plunder, and reducing their crews to the most abject state of slavery, from which there is no other hopes of escaping than by a powerful reclamation from the Emperor of Morocco, who is even obliged to pay a great ransom for their deliverance...

In the introduction to his two-volume publication about the West African Kingdom of Dahomey, British explorer Richard Francis Burton claims to offer only the unvarnished truth:

My principal object, it may be frankly owned, has been to show, in its true lights, the African kingdom best known by name to Europe. But in detailing its mixture of horrors and meanness, in this pitiless picture of its mingled puerility and brutality, of ferocity and politeness, I trust that none can rightfully charge me with exaggeration, and I can acquit myself of all malice.

Burton then proceeds to paint the “pitiless picture.” In the chapter titled, “I Do Not Become ‘Fast Friends’ with Lagos,” Burton writes:

On Dec. 2, we found ourselves rolling in the roads of pestilential Lagos, our lullaby the sullen distant roar, whilst a dusky white gleam smoking over the deadly bar in the darkening horizon threatened us with a disagreeable landing at the last, the youngest, and the most rachitic of Great Britain’s large but now exceedingly neglected family of colonies.

The town, however, and the townspeople as well, wore a new and greatly improved appearance, the work of the great benefactor of West African cities, “General Conflagration.” Three fires had followed one another in regular succession through November, December, and January, 1863; and the fire god will continue to “rule the roast” till men adopt some more sensible style of roofing than thatch and “Calabar mats.”

Burton’s criticism of Lagos extended to its climate, which he also blamed for the disposition of its inhabitants:

The place is also, I have said, pestilential; out of a grand total of seventy Europeans, not less than nine have lately died in thirteen days; others are expected to follow, and no man is safe at Lagos for a week. Breathing such an air, with such an earth below them, with such a sun above them, and with such waters within them, it is hardly to be wondered at that the Lagoonist’s temper is the reverse of mild.

Also included in this release is a late 19th-century edition of a history of Africa originally published in 1550 by al-Hassan ibn-Mohammed al-Wezaz al-Fasi, also known as Leo Africanus. In this edition’s introduction, Dr. Robert Brown offers some biographical information about the author: 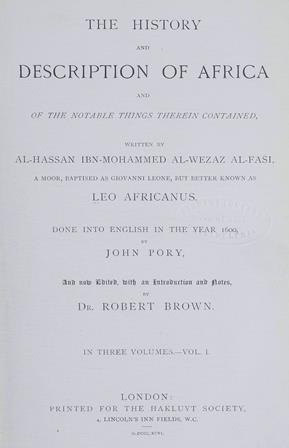 The Arab who wrote the famous work to which these pages form an Introduction bears many names. That by which he was first introduced to the knowledge of lettered Europe by Gian Battista Ramusio (1485-1557), Secretary of the Venetian Council of Ten, was Giovanni Leone or Leo. This name he received from Giovanni de Medici, Pope Leo X, who was first his master, then the priest by whom he was converted to Christianity, and finally his godfather and patron. Hence Leo is also sometimes known as Joannes Medices. Having been born in Granada he is occasionally termed Eliberitances—Granada being falsely supposed to be the Roman Illiberes. However, from the fact of Leo being an African, or from his writing on Africa, he is now invariably called Leo Africanus.

In addition to the original publication, this edition includes several maps that “form in themselves an important contribution to African geography, and greatly enhance the value of the book.” 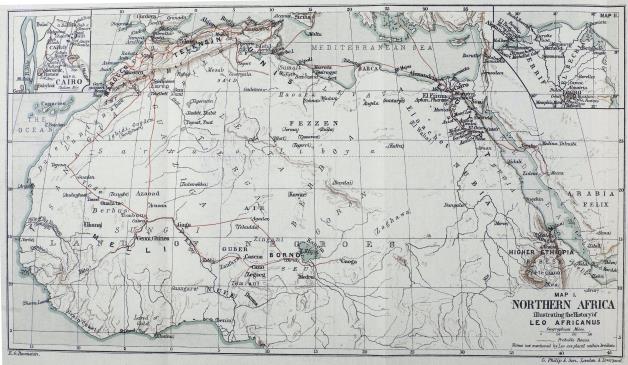 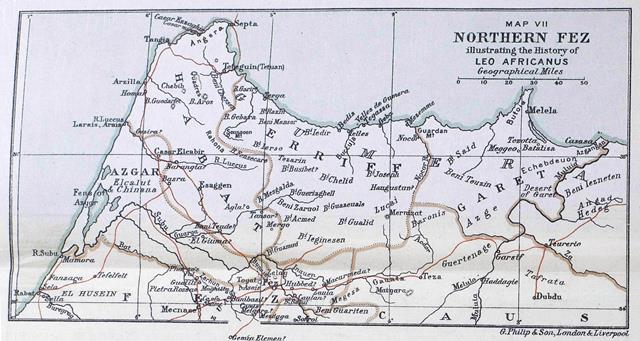