“Mohammed the Languid”: Tales of Zanzibar and Other Highlights from African History and Culture, 1540-1921

The May release of African History and Culture, 1540-1921: Imprints From the Library Company of Philadelphia includes: 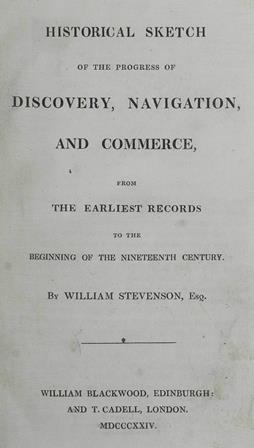 Historical Sketch of the Progress of Discovery, Navigation, and Commerce, from the Earliest Records to the Beginning of the Nineteenth Century (1824)

William Stevenson was a tutor, preacher, farmer, public servant, and historian. His history of discovery is a tour de force covering “the earliest traces of navigation and commerce” from the time of Herodotus, 450 B.C.E, to the point at which “the grand outline of the terraqueous part of the globe may be said to have been traced…”

A larger proportion of the volume is devoted to the progress of discovery and enterprise among the ancients…especially that which comprehends the commerce of the Phoeniceans, of the Egyptians under the Ptolemies, of the Greeks, and of the Romans is illustrated with more ample and minute details, than the period which has elapsed since the new world was discovered. To most readers, the nations of antiquity are known by their wars alone; we wished to exhibit them in their commercial character and relations.

Stevenson’s enthusiastic approach to such a broad topic and his contagious thirst for knowledge brings his work alive. His opening paragraph simultaneously challenges and entices his readers:

The curiosity of that man must be very feeble and sluggish, and his appetite for information very weak or depraved, who, when he compares the map of the world, as it was known to the ancients, with the map of the world as it is at present known, does not feel himself powerfully excited to inquire in the causes which have progressively brought almost every speck of its surface completely with our knowledge and access. 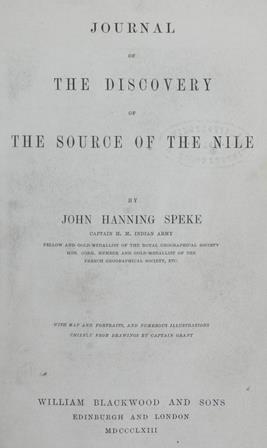 Journal of the Discovery of the Source of the Nile (1863)

Although primarily remembered as an explorer, Speke is also known as an advocate of a peculiar theory on ethnic relations known as the Hamitic hypothesis. The hypothesis asserted that some ethnic groups were descendants of the biblical figure Ham. According to the idea, these groups possessed lighter skin and more European features and made them closer to the "Hamitic race” and superior to the “Negroid” populations.

Speke’s dalliance with anthropology aside, his journal is filled with intrigue. He wrote of murder, slave and ivory traders, rhinoceros-stalking, a method of driving off evil spirits, an interfering magician, and diabolical possession. Of his first voyage on the Nile, Speke wrote:

In five boats of five planks each, tied together and caulked with…rags, I started with…a small crew to reach Kamrasi’s palace in Unyoro…but how many days it would take nobody knew. Paddles propelled these vessels, but the lazy crew were slow in the use of them, indulging sometimes in racing spurts, then composedly resting on their paddles whilst the gentle current drifted us along. The river, very unlike what it was from the Ripon Falls downward, bore at once the character of river and lake—clear in the centre, but fringed in most places with tall rush, above which the green banks sloped back like park lands. It was all very pretty and very interesting, and would have continued so, had not Kasoro disgraced the Union Jack, turning it to piratical purposes in less than one hour. 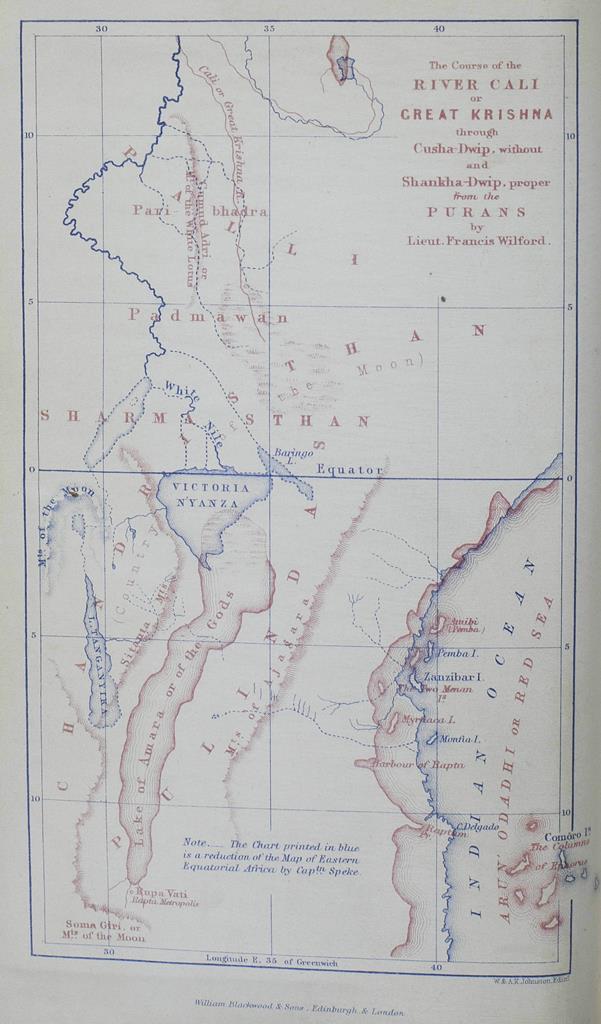 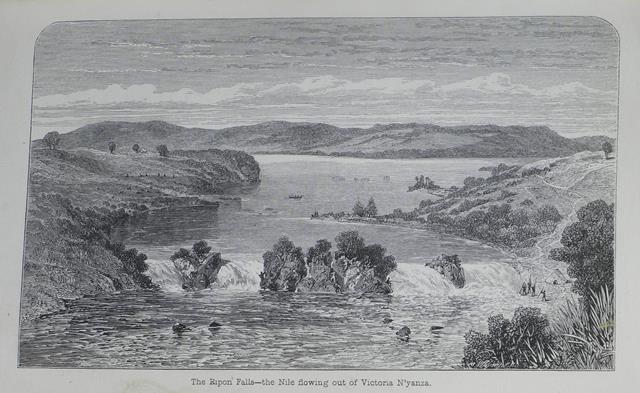 Swahili Tales as Told by Natives of Zanzibar (1870)

Edward Steere was born in 1828, educated at London University, and ordained in 1850. He was made Bishop of the British protectorate of Nyasaland, now Malawi, in 1874, and he worked with David Livingstone to abolish slavery in Zanzibar.

Steere acknowledged that the sources of the tales he translated in this volume were unknown to him: 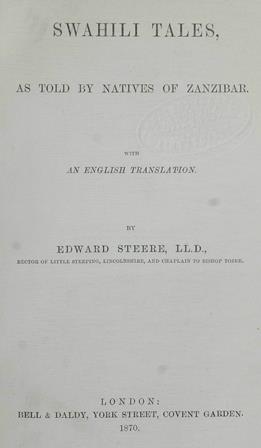 I cannot pretend to give a complete account of the sources whence the various tales are derived. Three of them occur in the Arabian Nights, ‘Mohammed the Languid,’ which is Chapter XIV of Lane’s translation, under the title of ‘Aboo-Mohammed the Lazy…; ‘the Cheat and the Porter,’ and ‘Hasseebu Kareem ed deen,’ which are not included in Lane’s translation. We have an Arabic MS. in the mission library at Zanzibar, containing the story of ‘Hasseebu,’ but differing in many of the names and circumstances from any form given in the Arabian Nights. I do not know how far others of the tales may come from Arab sources. It must be remembered that as a Swahili is by definition a man of mixed Negro and Arab descent, he has an equal right to tell tales of Arab and Negro origin.

Whether Steere was correct in his assessment of who has a right to tell which legends, readers can still appreciate his effort to record these translations “as a help to my own endeavours to master the language of Zanzibar, and [which] are now printed chiefly as a help to those who are to follow me in the same work.”