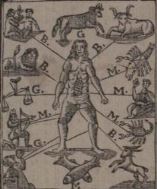 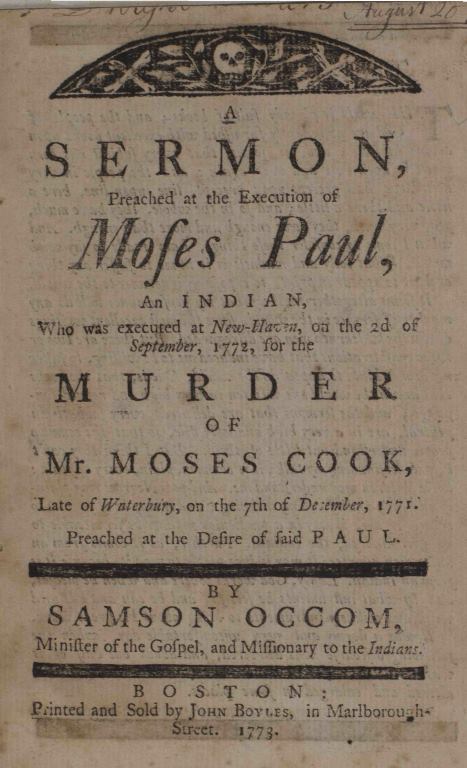 Samson Occom, a member of the Mohegan nation, was a unique minister in his time. He studied theology under Eleazar Wheelock, who would later establish Dartmouth College, after which he embarked on a mission to convert his fellow Native Americans to Christianity. Much of this sermon bears a close resemblance to other public execution declamations of the era, but it deviates from the others by the inclusion of specific admonitions to the Indians who were present at the execution of another native.

Occom discourses on sin and offers the hope of expiation. However, in order to impress on his audience that they risk being consigned to hell for all eternity, he describes eternity:

And O eternity, eternity, eternity! Who can measure it? Who can measure it? Who can count the years thereof? Arithmetic must fail, the thoughts of men and angels are drowned in it; how shall we describe eternity? To what shall we compare it? Were it possible to employ a fly to carry off this globe by the small particles thereof, and to carry them to such a distance that it should return once in ten thousand years for another particle, and so continue till it has carried off all of this globe, and framed them together in some unknown space, till it has made just such a world as this is: after all eternity would remain the same unexhausted duration.

(In A Portrait of an Artist as a Young Man, James Joyce recounts a sermon preached to Catholic schoolboys which is strikingly similar, if more elaborate, involving grains of sand and a little bird.)

At one point Occom addresses the condemned Moses Paul:

As it was your own desire that I should preach to you this last discourse, so I shall speak plainly to you.—You are the bone of my bone, and flesh of my flesh. You are an Indian, a despised creature; but you have despised yourself; yea you have despised God more; you have trodden under foot his authority; you have despised his commands and precepts: and now, as God says, be sure your sins will find you out. And now, poor Moses, your sins have found you out, and they have overtaken you this day; the day of your death is now come; the king of terrors is at hand; you have but a very few moments to breathe in this world.

He condemns Moses for his drunkenness but implores mercy on him and forgiveness for his sins. The sin of drunkenness and the destruction it causes is dwelt upon at length, concluding

Finally, Occom turns to the other Indians present addressing them as “My poor kindred” and beseeching them specifically to forswear inebriation. The drunkard, he warns

dis-figures every part of him, both soul and body, which was made in the image of God. He appears with awful deformity, and his whole village is dis-figured; if he attempts to speak he cannot bring out his words distinct, so as to be understood; if he walks he reels and staggers to and fro, and tumbles down. And see how he behaves, he is now laughing, and then he is crying; he is singing and the next minute he is mourning; and is all love to every one, and anon he is raging, and for fighting, and killing all before him, even the nearest and the dearest relations and friends: Yea nothing is too bad for a drunken man to do.

He further declares against the large number of drunken women whom he acknowledges are numerous among the Native Americans. He concludes by imploring them to learn a hard lesson by witnessing the execution of the drunkard Moses Paul.

This Volume belongs to Dabney's Circulating Library, at the Salem Bookstore (Consisting of Several thousand Volumes.) (1794)

Uniting every subject of Art, Science, Information, and Amusement….Where Ladies and Gentlemen, of Sentiment and Taste, in Town and Country, May enjoy, at a small Expense, a rich variety of Intellectual Refreshment and Literary Treasure, Affording rational Pastime for the vacant hour. 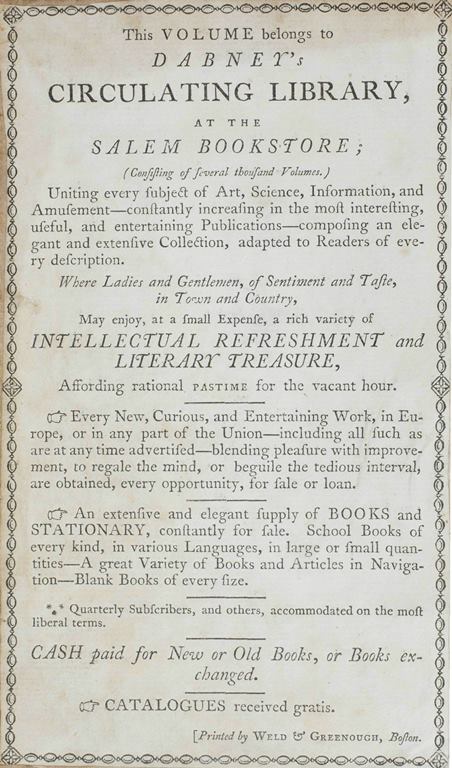 This bookplate serves also as a charming promotion for Mr. Dabney’s bookstore and circulating library where he promises that “Quarterly Subscribers, and others, accommodated on the most liberal terms.” He further promises that his selection of “new, curious, and entertaining” books blend “pleasure with improvement, to regale the mind, or beguile the tedious interval…”

The Southern States Ephemeris: or, The North and South-Carolina, and Georgia Almanac, for the Year of our Lord, 1787 (1786) 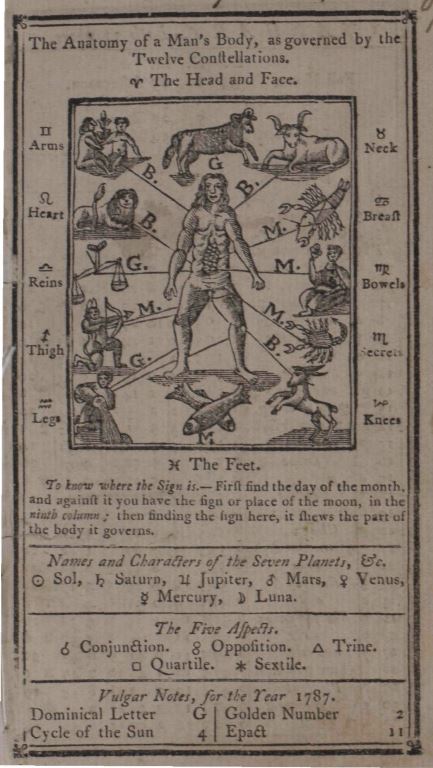 Evidencing certain regional and cultural differences, including the printing of importation duties "per head on negroes," this Southern almanac is illustrated with a relief print titled “The Anatomy of a Man’s Body, as Governed by the Twelve Constellations.” Readers are advised that

To know where the Sign is.—First find the day of the month, and against it you have the sign or place of the moon, in the ninth column; then finding the sign here, it shews the part of the body it governs.

Among its pages are: 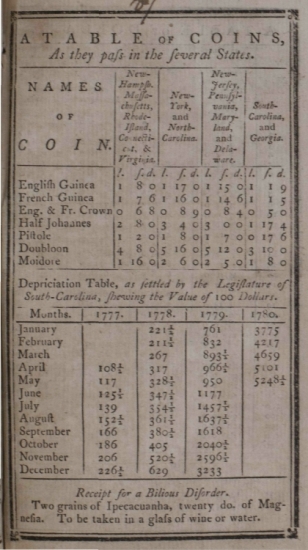 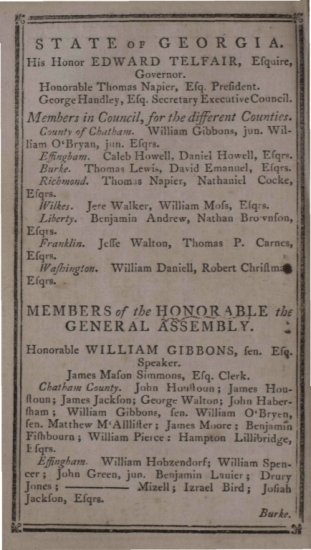 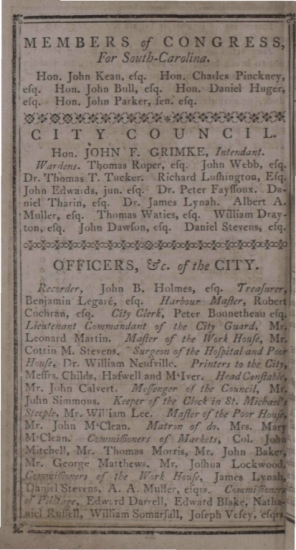 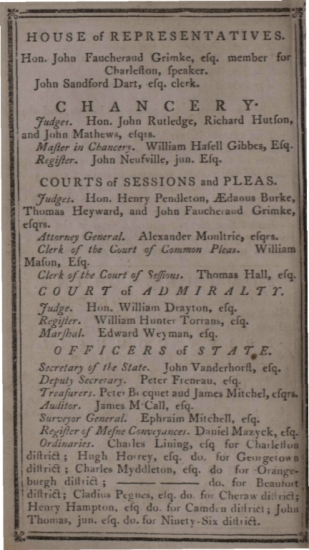 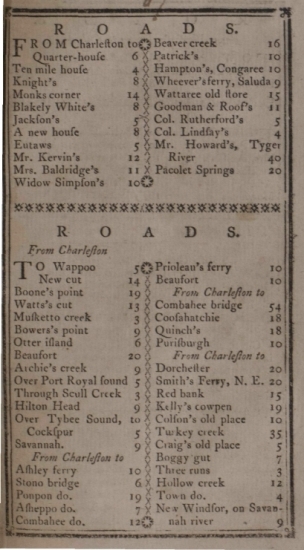 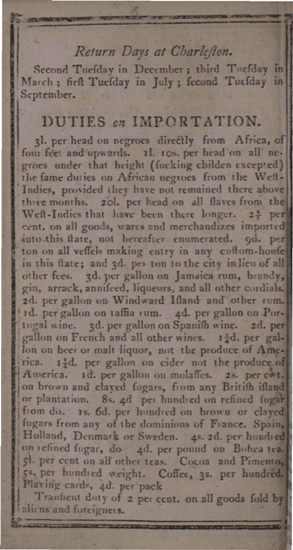 Scattered throughout the text are helpful advice on farming and cures for physical complaints, including these three examples:

Take of conserve of roses, two oz. cinnabar of antimony, levigated, an oz. and a half; gum guaiacum, in powder, an oz. syrup of ginger, a sufficient quantity to make an electuary.

In obstinate rheumatisms, which are not accompanied with a fever, a tea-spoonful of this electuary may be taken twice a-day with considerable advantage.

Cure for the Bite of a Rattle-snake. Lately discovered.

Make an incision immediately of the place stung, and fill it with indigo; all future danger will be prevented.

Some useful Directions in Husbandry

Cut timber for lasting, the last quarter of the moon in January.

Cut wood for firing, the first quarter of the moon.

Kill beeves or swine for salting, the first quarter of the moon.

Sheer sheep the moon increasing, soon after the change.

Cut hedges between the change and full of the moon, from January to May.

Dung land, that weeds may not abound, in the last quarter of the moon.

Graft and plant trees just after the new moon.