“Silkeries of the Skies”: The Solar Superstorm of 1859 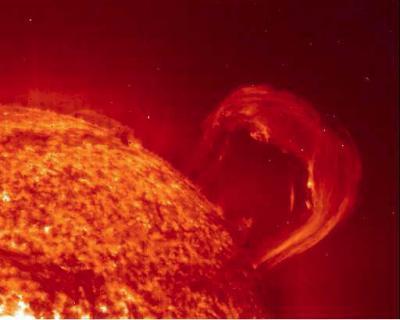 Last night one of the most magnificent atmospheric exhibitions that have ever been witnessed in this latitude took place. A display of the aurora borealis of surpassing extent and beauty occupied the heavens, producing the most singular effects, and exciting the admiration and awe of the thousands that witnessed the wondrous sight.

This article, first published in the New York Evening Post, was reporting on what we know today as the solar storm of 1859. This massive storm, the largest of its kind on record, would also become known as the Carrington Event after British astronomer Richard Carrington who made some of the earliest astronomical observations of the solar flare. The flare and resulting geomagnetic storm of 1859 produced auroras seen around the world.

To the east and to the west lay huge fields of luminous clouds, tinted with a bright rosy flush, wholly unlike that produced by the rising sun, and, if possible, even more beautiful. For some ten minutes this climax remained. The ruby crown, gemmed and fringed by sparkling stars, retained its proud position in the zenith, and the tremulous waves of light floated and quivered downwards like some imperial train waved by the cool night winds. At times it suggested a mighty hand and an outstretched arm, bound at the wrist with a bracelet of ruby and diamond, with the open palm held as if in benediction over the earth, while the fingers of light reached almost to the distant horizon.

On the following day the Providence Evening Press wrote:

Between 12 and 1 o’clock this morning the heavens were illuminated with a display which was in no respect inferior to the magnificent phenomenon of Sunday night. In the north, northeast and northwest at first there was a light like that of the full moon, and showing everything in the streets as plainly. This light seemed to come in waves, differing in magnitude, velocity and color. At some moments the sky was as deeply crimsoned as on Sunday. At 1 1-2 o’clock, the strange light showed from all points of the compass, and the deep crimson cloud floating in the south as well as in the north, and the magnetic beams radiated from the zenith, and every moment was unlike the last. A chilly wind was blowing from the north. 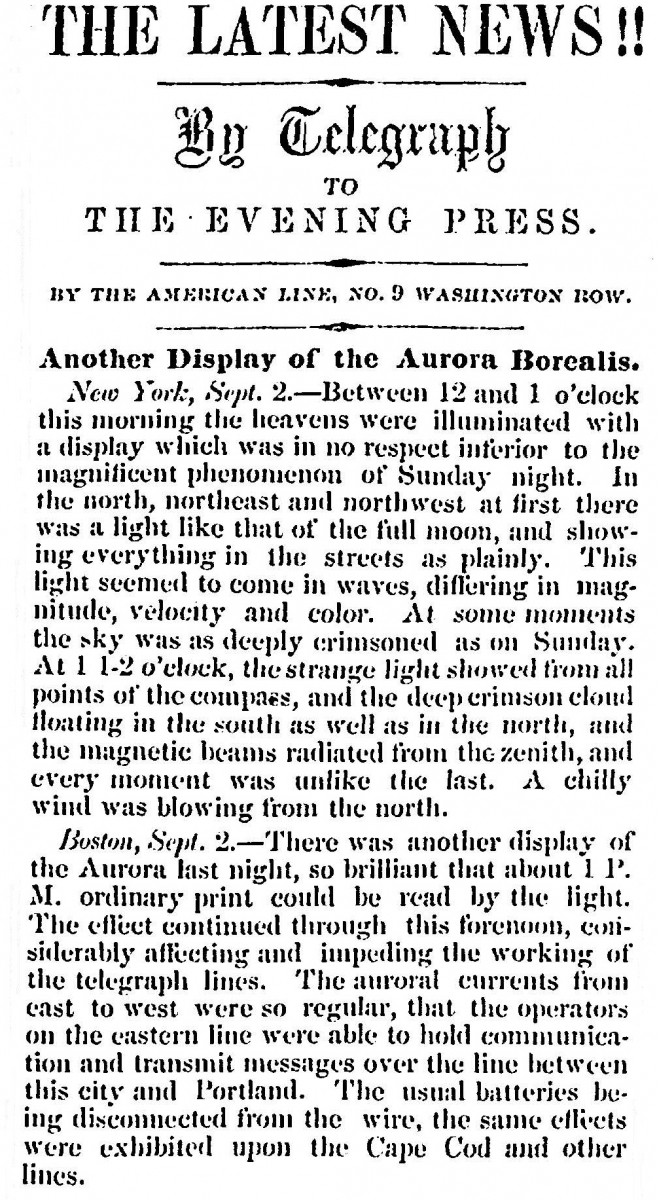 On Sept. 7 the Alexandria Gazette reprinted an article first published in the Boston Journal titled “Cause of the Aurora Borealis,” recounting various explanations for the phenomena:

This is yet an undecided question. Some have ascribed the appearance to solar light refracted in the higher regions of the air, others to the agency of the magnetic fluid.—Euler imagined it to proceed from the same ether which formed the tails of comets; Mairan conceived it to arise from the mixture of the atmosphere of the sun with that of the earth: but when the properties of electric light became known, and when its appearance in rarefied air had been observed, all these hypotheses were by common consent abandoned, and little doubt was entertained that, whatever be the details of the natural process by which it was produced, the aurora borealis was the effect of atmospheric electricity. This is confirmed by the disturbance of the wires of the electric telegraph during auroral displays, which frequently entirely interrupts communication.

The Daily Ohio Statesman, in “The Aurora Borealis Problem Solved,” also offered previously held explanations before confirming the effect of a “disturbance of the wires”:

On Sunday night and Monday morning there was an unusually brilliant exhibition of the Aurora Borealis, which covered one half of the Northern heavens from East to West. This mysterious light has ever puzzled natural philosophers, who have advanced the most contradictory explanations for the phenomena. Some have ascribed them to the retraction of the sun’s rays from Arctic Icebergs; others have believed that the refraction is from Northern ice or snow, and the tremulous motion to be caused by the perpetual vibrations of the earth’s atmosphere but the magnetic telegraph has solved the problem. On Sunday evening, when the sky was perfectly clear, and stars shining and the wind still, the only unusual appearance being the reddening of the Northern and Eastern heavens, one of the operators in the Harrisburgh [sic] office chanced to touch the wire and was thrown, by the violence of a shock which he received, across the room. 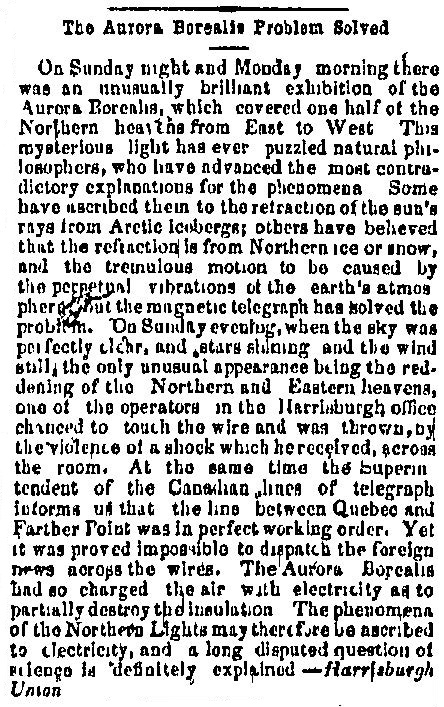 Following a spectacular description of the aurora, the Salem Register provided additional information about the occurrence.

The effect upon telegraphing has been frequently observed, particularly by the operators….The atmospheric electricity generated during thunder storms passes from the wire emitting a bright spark, and a sound like the snapping of a pistol, never remaining long upon the wires. But the electricity produced by the aurora passes along the wires in a continuous stream with not sudden discharge—effecting the same result as that by the galvanic battery.

In the days after the Carrington Event the Boston Traveller published a transcript of the first conversation transmitted by the auroral current, the dialogue between the Boston and Portland operators was reprinted in the Sept. 6 edition of the Alexandria Gazette. 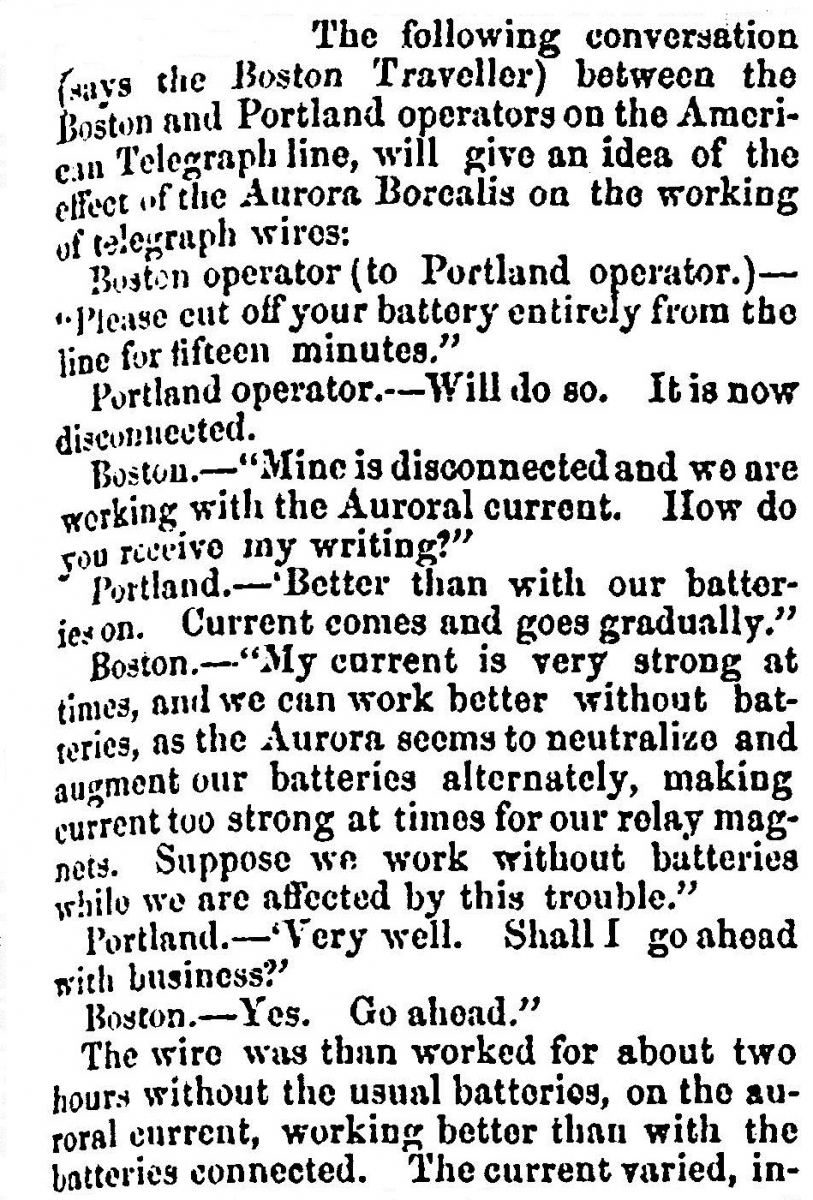 The wire was than (sic) worked for about two hours without the usual batteries, on the auroral current, working better than with the batteries connected. The current varied, increasing and decreasing alternately, but, by graduating the adjustment to the current, a sufficiently steady effect was obtained to work the line very well.

The New York Herald, on Sept. 5, reported on the phenomena and offered this reassurance:

Many timid and superstitious persons, even among the most enlightened classes of the community, are seriously apprehensive that the grand exhibitions of the northern lights, with which the skies have been nightly illuminated all last week, were portentous omens of some terrible event that is about to befall the world. It is an old superstition revived, or rather one that has never died out. From the most remote ages of human existence atmospheric phenomena have been always linked and connected, at least in imagination, with calamities.

The Herald article describes a number of historical calamities attributed to displays of the aurora and eventually offers a suggestion of how to discover the true cause of the light show:

As philosophers are unable to solve the problem, why do not the aeronauts try it?…Suppose that…they would ascend in their balloons and try to get a glimpse of the foundation line of the aurora borealis. We recommend them to try it some of these evenings. They can at least give us grand descriptions of the prospects aloft, and perhaps enable us to decide the great question whether they are nothing more than silkeries of the skies.

As the Harrisburg telegraph operator who was thrown across the room could attest, solar flares and storms of a magnitude similar to the Carrington Event are far more than “silkeries of the skies.” They have the potential to cause significant disruptions to satellites, electrical grids, and computer systems. In July 2012 a Carrington-class solar superstorm narrowly missed the Earth, crossing our orbit at a point we had occupied only days before. Some estimates suggested areas of the country could have been left without power for a decade had the trajectories intersected.