The June release of Black Authors, 1556-1922: Imprints from the Library Company of Philadelphia includes the portents of a West Indian astrologer, a scholar’s escape from being tarred and feathered, and the poems of James Madison Bell. 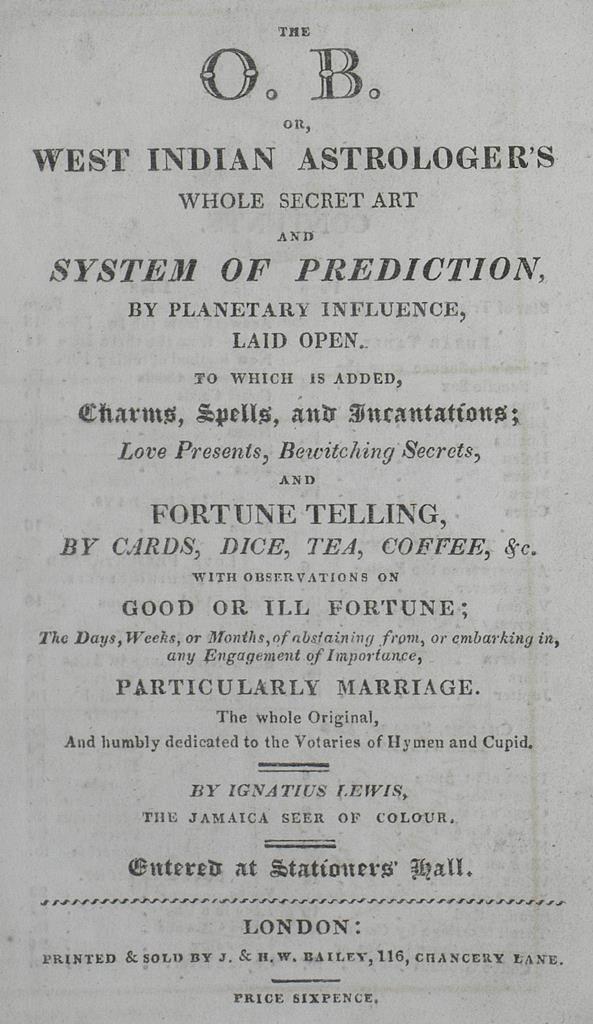 By Ignatius Lewis, the Jamaica Seer of Color

To his secret art and system of prediction, Ignatius Lewis added “charms, spells, and incantations; love presents, bewitching secrets, and fortune telling, by cards, dice, tea, coffee, &c. with good or ill fortune; the days, weeks, or months, of abstaining from, or embarking in, any engagement of importance, particularly marriage.”

On a lunar table showing “the moon’s influence over the female sex” are these potential experiences: “Loss of Reputation, Treachery, and Tears.” And, “What you save in trifles you will squander largely, and do no good with it.” And, “You will soon see one whom you will wish far distant but you cannot avoid the meeting.”

The influence of Diana may signify that: “You will never marry; or if you should, by some unexpected chance or turn of fate, embrace wedlock, you will not be happy, so be cautious.”

A. You will be run away with against your own consent.

B. You will elope with your own free will.

C. You will have many lovers, even in old age.

D. A duel will take place on your account.

E. You will place your affections on a very amorous youth, who will deceive you, and cloud your future days with sorrow. 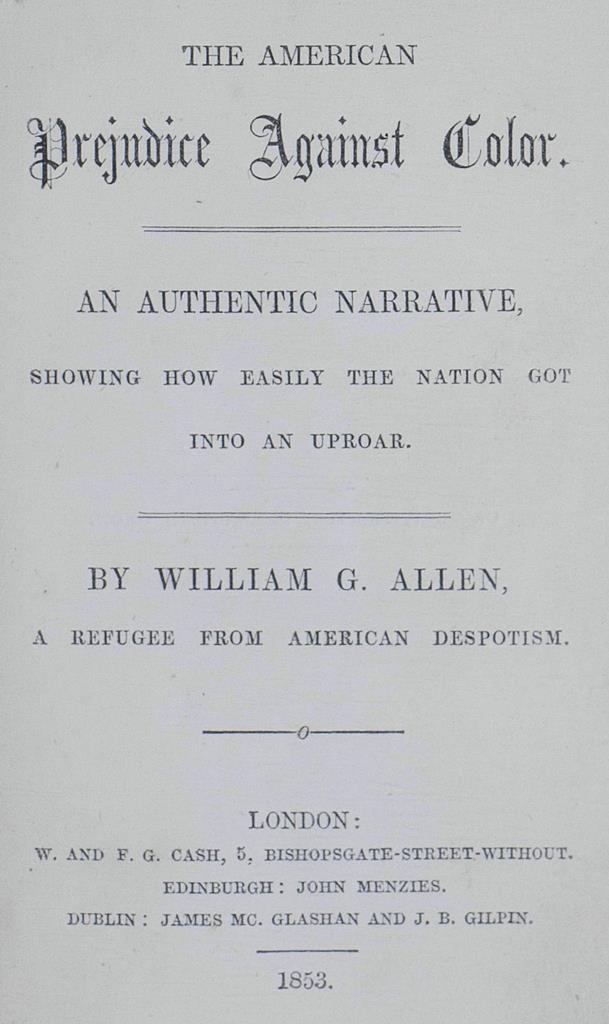 The American Prejudice Against Color (1853)

By William G. Allen, a refugee from American despotism

William G. Allen was a noted abolitionist, scholar, and author. At about 20 years old he was enrolled at the Oneida Institute, a manual labor school in Whitestown, New York. Allen would go on to teach school and edit the National Watchman, an abolitionist and temperance paper. In 1850, just ten years after enrolling at Oneida, Allen became a faculty member of the New York Central College, which had been founded the previous year by anti-slavery Baptists. Three years later, Allen proposed to a white woman whose father refused his permission. The consequences of which, as well as race relations in general, are the subject of this work.

Writing for a British audience, William Allen begins his story with this compelling introduction:

Many persons having suggested that it would greatly subserve the Anti-slavery Cause in this country, to present to the public a concise narrative of my recent narrow escape from death, at the hands of an armed mob in America, a mob armed with tar, feathers, poles, and an empty barrel spiked with shingle nails, together with the reasons which induced that mob, I propose to give it. I cannot promise however, to write such a book as ought to be written to illustrate fully the bitterness, malignity, and cruelty, of American prejudice against color, and to show its terrible power in grinding into the dust of social and political bondage, the hundreds of thousands of so-called free men and women of color of the North. This bondage is, in many of its aspects, far more dreadful than that of the bona fide Southern Slavery, since its victims—many of them having emerged out of, and some of them never having been into, the darkness of personal slavery—have acquired a development of mind, heart, and character, not at all inferior to the foremost of their oppressors.

The book that ought to be written, I ought not to attempt; but if no one precedes me, I shall consider myself bound by necessity, and making the attempt, lay on, with all the strength I can possibly summon, to American Caste and skin-deep Democracy.

The mob occurred on Sabbath (!) evening, January the 30th, 1853, in the village of Phillipsville, near Fulton, Oswego County, New York. The cause,—the intention, on my part, of marrying a white young lady of Fulton,—at least so the public surmised. 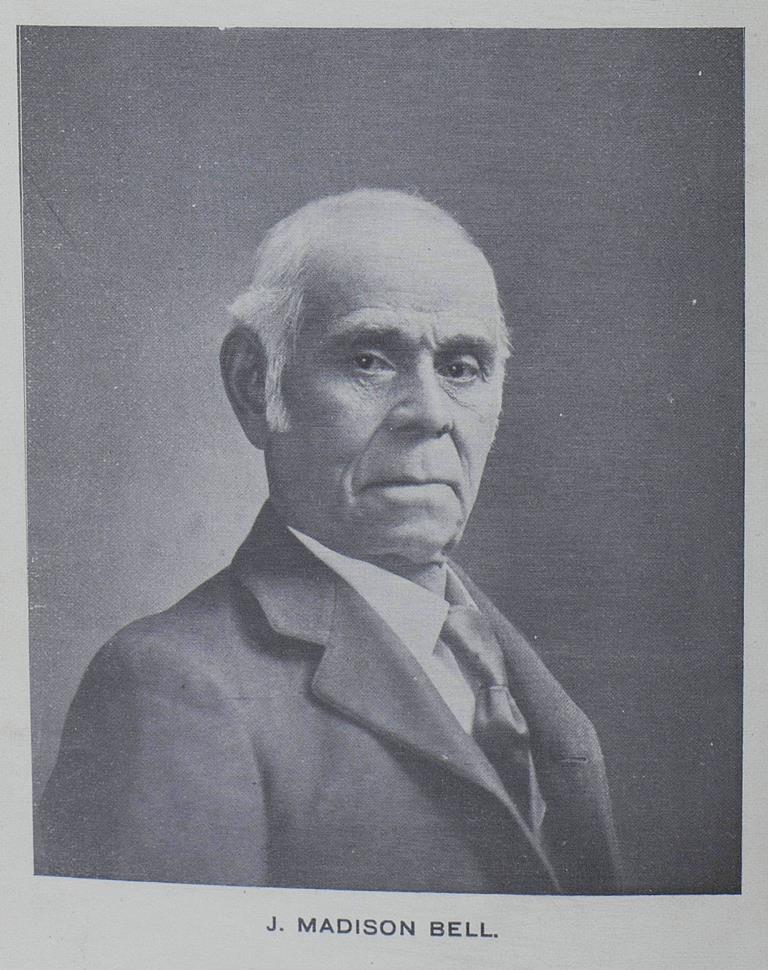 Although little is known of James Madison Bell’s family or background he became a well-known abolitionist and master of poetry who drew large audiences to his dramatic readings on themes of liberty, freedom, and hope.

Twenty-seven of his poems, including “The Day and the War,” Bell’s most famous poem, which he dedicated to the abolitionist John Brown, are found in this volume.

His poetry is like the flowing of the mountain spring, the secret of its source is unknown. It was not a well dug or bored, but a natural out-flowing of the crystalline stream, which came bubbling, sparkling, leaping, rolling, tumbling and jumping down the mountain side, flowing out over the plain like a silver brook on its journey towards the sea, furnishing water for thirsty beast and man, power for mills and factories, and life for the vegetable world. So it is with the poems of Mr. Bell. 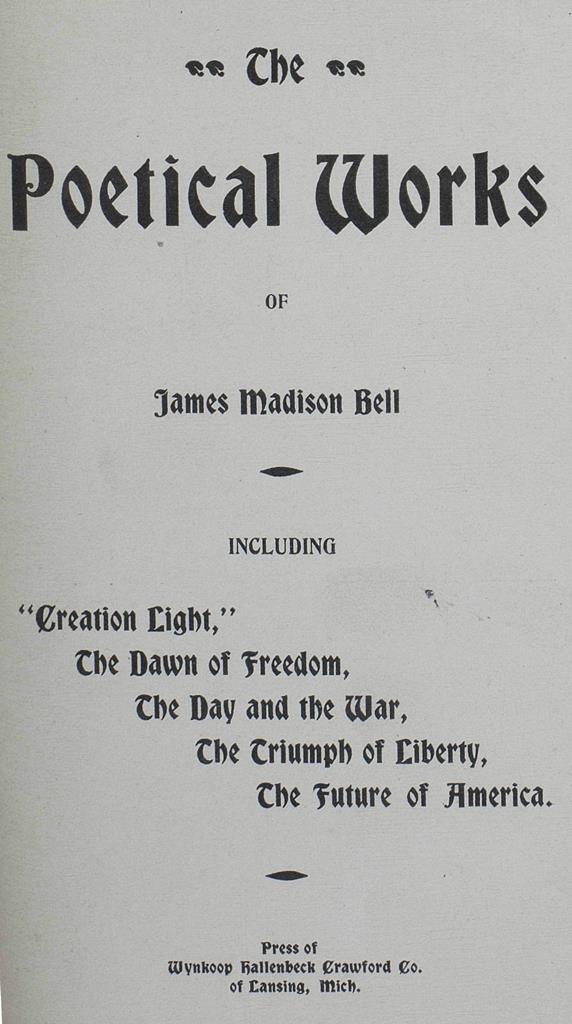 Here is one of Bell’s lesser-known works:

O, fleeting Time! Whence art thou come?
And whither do thy footsteps tend?
Deep in the past where was thy home,
And where thy future journey’s end?

Thou art from vast eternity,
And unto boundless regions found;
But what and where’s infinity?
And what know we of space unbound?

The furrowed brow betokens age;
But who thy centuries can tell?
Was ancient seer or learned sage
In wisdom’s lore e’er versed so well?

From childhood hast thou wandered thus
Companionless and lone, through space,
With mystery o’er thy exodus,
And darkness ‘round thy resting place?

What lengthened years have come and gone,
Since thou thy tireless march began?
Since Luna’s children sang at down,
The wonders of creation’s plan?

How many years of gloom and night
Had passed, long ere yon king of day
Had reigned his fiery steeds of light,
And sped them on their shining way?

Thou knowest—Thou alone, O thou!
Omniscient and eternal Three!
To whose broad eye all time is now—
The past, with all eternity;

In whose dread presence shall I stand,
When time shall sink to rise no more,
In that broad sea of thy command,
Whose waves roll on, without shore.