“Those who are only comfortably sick…”: Highlights from the Newest Supplement to Early American Imprints, Series II

The November release of Early American Imprints, Series II: Supplement 3 from the American Antiquity Society includes an olio of rare imprints which are representative of the overall collection. Highlighted here are an advertisement for a mineral springs resort, a broadside promoting an evening’s theatrical entertainment, and another broadside reporting on the meeting of the Republican Party in New York City and county. 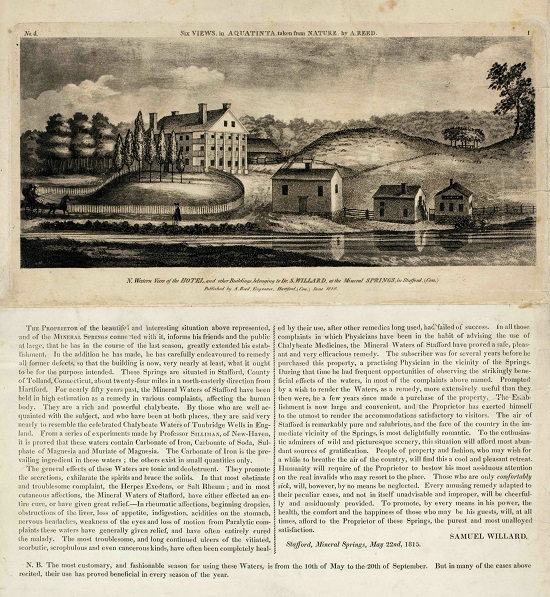 The proprietor of the beautiful and interesting situation above represented, and of the mineral springs connected with it, informs his friends and the public at large, that he has in the course of the last season, greatly extended his establishment. (1815)

This imprint is adorned with a handsome intaglio print which presents a restful view of the Connecticut resort. The proprietor, Samuel Willard, has made what may be extravagant claims about the efficacy of his mineral springs.

For nearly fifty years past, the Mineral Waters of Stafford have been held in high estimation as a remedy in various complaints, affecting the human body. They are a rich and powerful chalybeate.

Willard details the curative power of the waters.

The general effects of these Waters are tonic and deobstruent. They promote the secretions, exhilarate the spirits and brace the solids. In that most obstinate and troublesome complaint, the Herpes Exedens, or Salt Rheum; and in most cutaneous affections, the Mineral Waters of Stafford, have either effected an entire cure, or have given great relief.—In rheumatic affections, beginning dropsies, obstructions of the liver, loss of appetite, indigestion, acidities on the stomach, nervous headaches, weakness of the eyes and loss of motion from Paralytic complaints these waters have generally given relief, and have often entirely cured the malady. The most troublesome, and long continued ulcers of the vitiated, scorbutic, scrophulous and even cancerous kinds, have often been completely healed…

He concludes by praising the salubrious physical setting and its positive effects on everybody.

People of property and fashion, who may wish for a while to breathe the air of the country, will find this a cool and pleasant retreat. Humanity will require of the Proprietor to bestow his most assiduous attention on the real invalids who may resort to the place. Those who are only comfortably sick, will however, by no means be neglected. 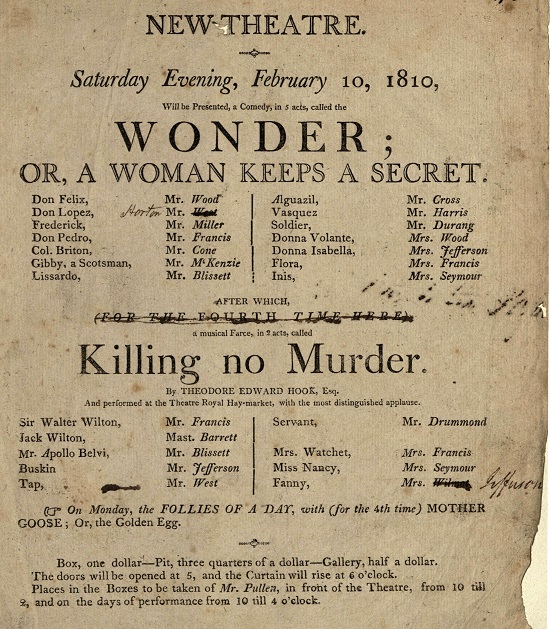 Handwritten corrections appear on this broadside which promotes an event at the Chestnut Street Theatre in Philadelphia (which was also known as the New Theatre). The evening features a comedy titled “Wonder; or, A Woman Keeps a Secret.” The performance had a cast of 10 men and four women, most of whom are identified with Spanish names. The musical farce is billed as:

And performed at the Theatre Royal Hay-market, with the most distinguished applause.

The notice details one exception to “Killing no Murder.”

On Monday, the FOLLIES OF A DAY, with (for the 4th time MOTHER GOOSE; Or, the Golden Egg.

Box, one dollar—Pit, three quarters of a dollar—Gallery, half a dollar.

The doors will be opened at 5, and the Curtain will rise at 6 o’clock.

Places in the Boxes to be taken of Mr. Pullen, in front of the Theatre, from 10 till 2, and on the days of performance from 10 till 4 o’clock. 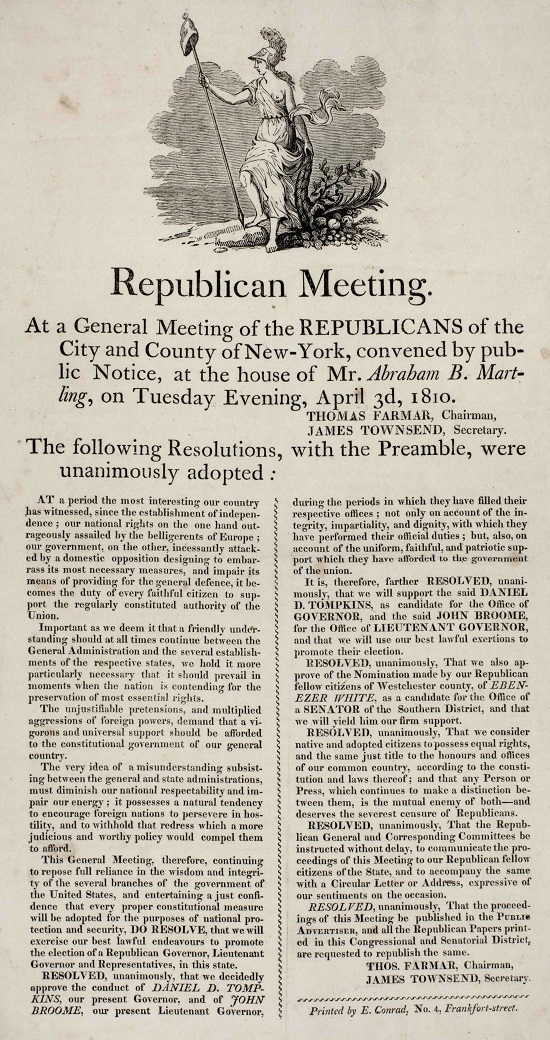 Republican Meeting. At a General Meeting of the Republicans of the City and County of New-York… (1810)

This imprint will be of particular interest to those curious about the evolution of the two major U.S. political parties extant in contemporary times. The major issue with which the meeting was concerned was the political relationship between the federal government and the governments of the various states. The preamble begins:

AT a period the most interesting our country has witnessed, since the establishment of independence; our national rights on the one hand outrageously assailed by the belligerents of Europe; our government, on the other, incessantly attacked by a domestic opposition designing to embarrass its most necessary measures, and impair its means of providing for the general defence, it becomes the duty of every faithful citizen to support the constituted authority of the Union….

The very idea of a misunderstanding subsisting between the general and state administrations, must diminish our national respectability and impair our energy; it possesses a natural tendency to encourage foreign nations to persevere in hostility, and to withhold that redress which a more judicious, and worthy policy would compel them to afford.

RESOLVED, unanimously, That we consider native and adopted citizens to possess equal rights, and the same just title to the honours and offices of our common country, according to the constitution and laws thereof; and that any Person or Press, which continues to make a distinction between them, is the mutual enemy of both—and deserves the severest censure of Republicans.

For more information about the Supplements from the American Antiquarian Society to Early American Imprints, please contact Readex Marketing.