“Through the tears, confident and determined”: American Women Get the Vote One Century Ago 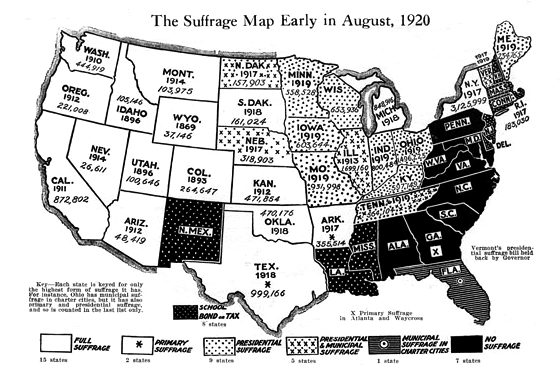 August 18, 1920, was a momentous day for the women of America. When Tennessee ratified the 19th Amendment to the U.S. Constitution, the act granting equal suffrage for women, which had been passed by Congress earlier in the year, became the law of the land. The preceding months of 1920 was a time of growing enthusiasm, apprehension, and frustration for the women and men who advocated for this landmark legislation.

On January 7, 1920, the Anaconda Standard of Montana published an article headlined “Suffrage Amendment is Still Short in 12 States.” At that time 36 states had to ratify a proposed amendment for the act to be added to the Constitution.

Two days later, in a widely print Associated Press story, the Democratic leader of New Jersey attacked the amendment calling it “the mother of all ‘isms,’ the greatest menace now threatening the stability of the American government and American institutions.” He added that with along with prohibition the amendment “was forced through an effeminate, absentee congress of cowards by coercion and intimidation.” 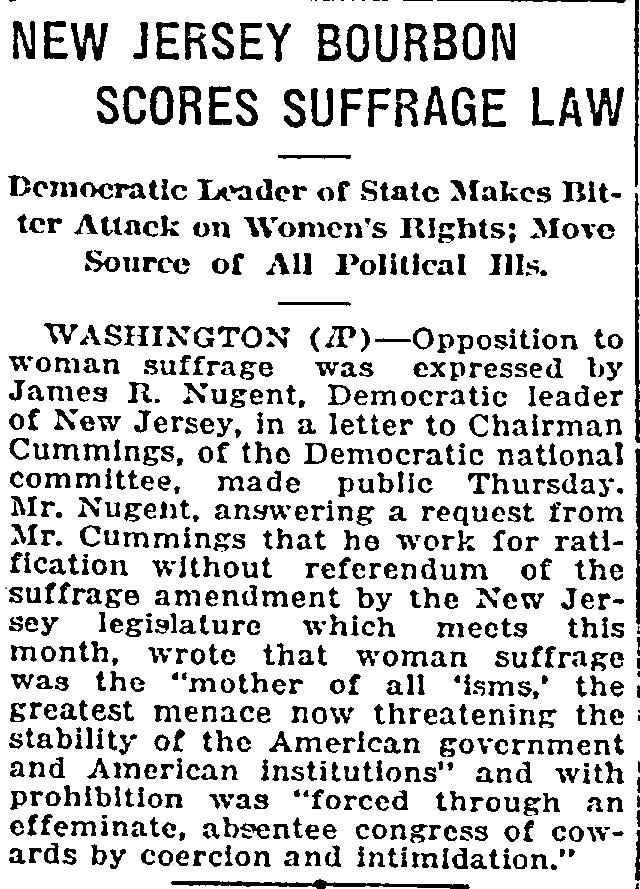 On the brighter side, the San Jose Mercury Herald reported on January 17 that the Indiana Legislature had ratified the amendment by overwhelming margins. 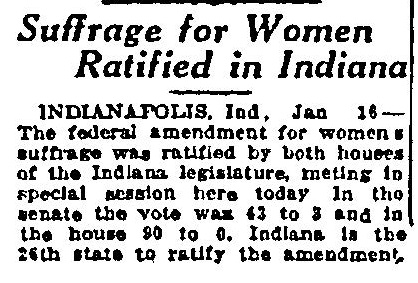 It must have felt like whiplash to the proponents when the Virginia Legislature rejected “the federal suffrage amendment by a vote of 24 to 10” on February 6 as reported in the Portland Oregonian. 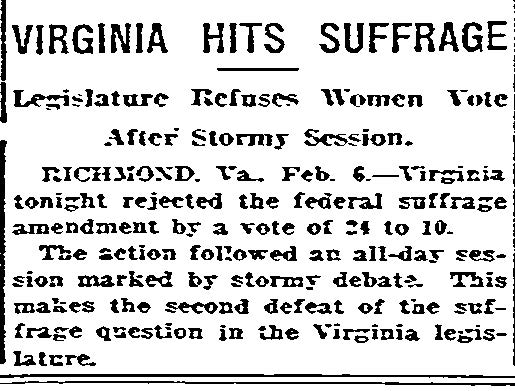 However, perseverance was being rewarded. When the national suffrage convention was held in mid-February in Chicago, it was noted that “Many of the women on the program were 80 or over” who “had held to their enthusiasm and had just kept on through the tears, confident and determined.” Not incidentally, the League of Women Voters “which is positively a non-partisan body” was formed at this convention as reported by the Cleveland Plain Dealer. 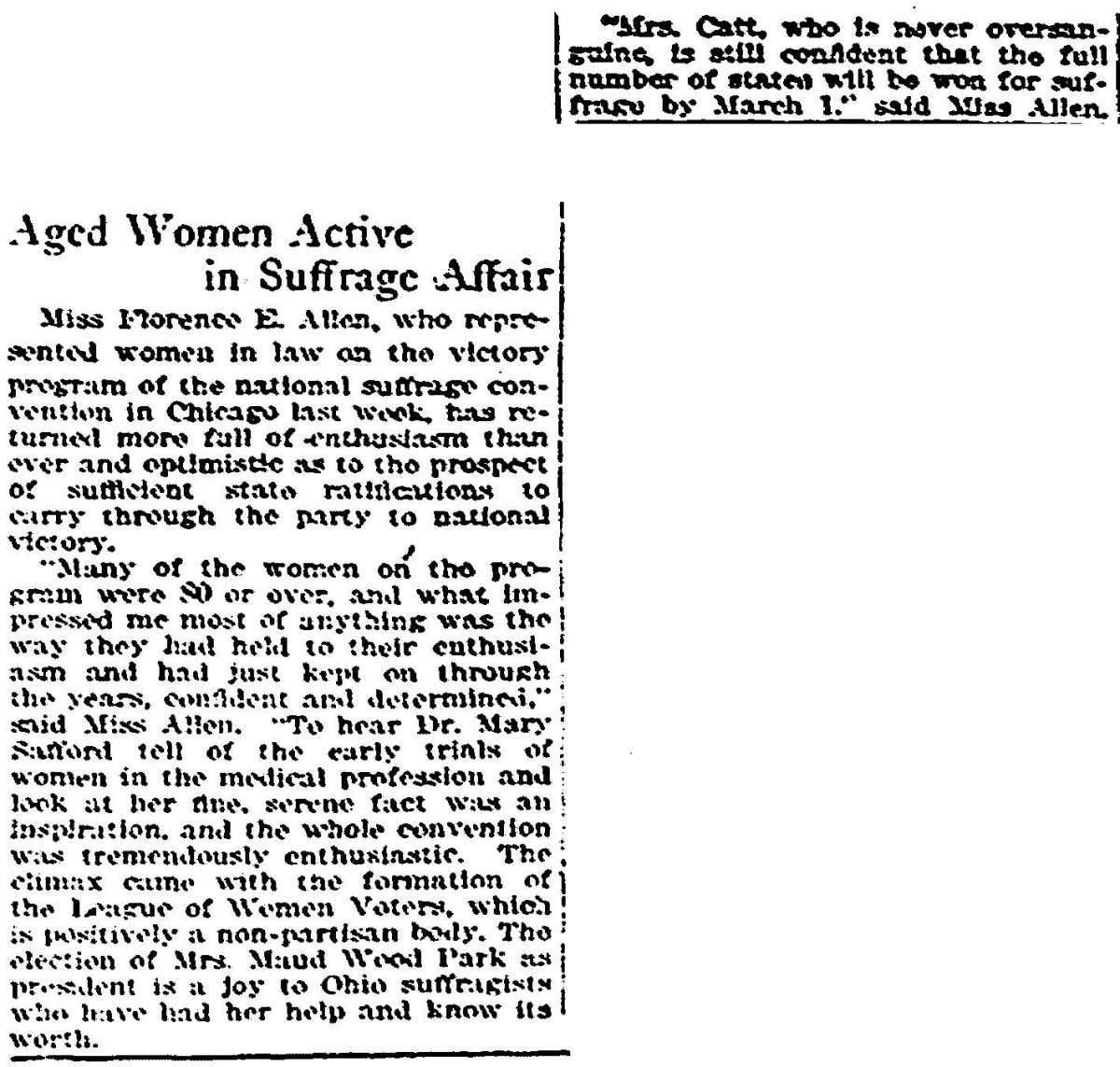 The pendulum swung again on February 27 when Arkansas’s governor “declared tonight that ratification of the federal woman’s suffrage amendment was completed today, as far as the legislature was concerned when the Senate adopted the House concurrent resolution.” The Columbus Daily Enquirer-Sun reported the news. 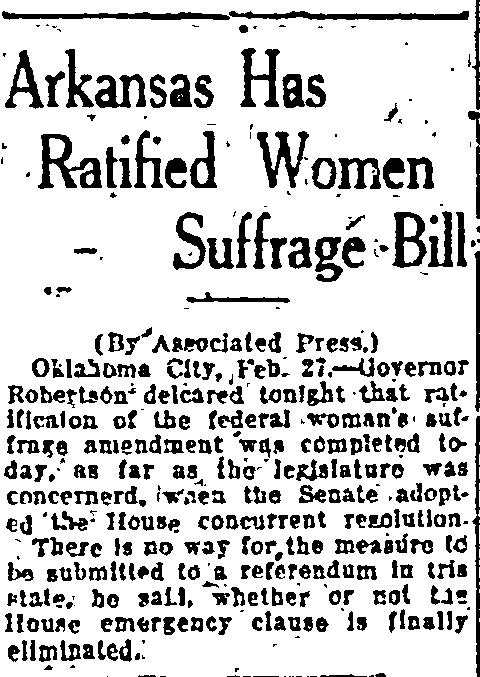 By the beginning of March, the cause had taken a significant leap when ten of the putative presidential candidates urged passage. Interestingly, among the five Republicans and five Democrats who favored the amendment was Warren Harding. James Cox, who became his opponent, had in 1918 as governor of Ohio supported constitutional amendments for prohibition and women’s suffrage. The Charlotte Observer reported the endorsements and the information that 33 states had by then ratified the amendment “by which it is estimated approximately 25,000,000 women would become eligible to vote.” 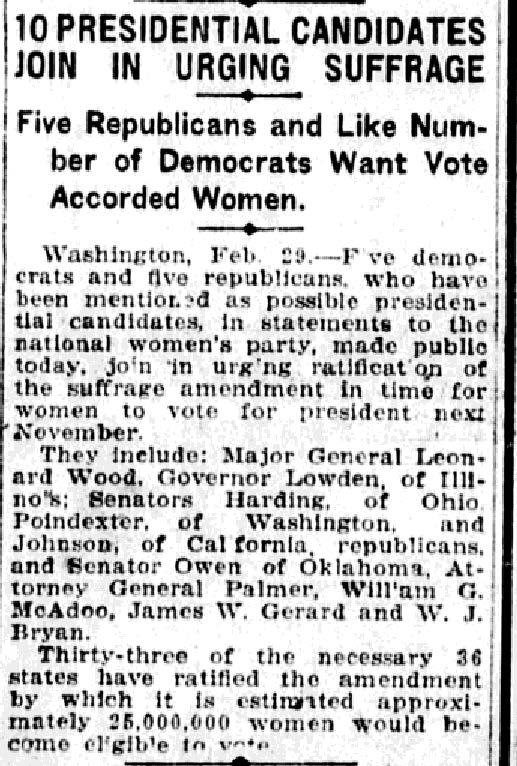 On March 9 the Fort Wayne News Sentinel ran an article under the headline “Suffrage for Women is in Perilous Situation” subtitled “Heroic Measures Necessary to Insure Women Vote in the Fall Elections.” The reporter identifies among the states yet to vote those which were at risk and those which might act favorably in time. 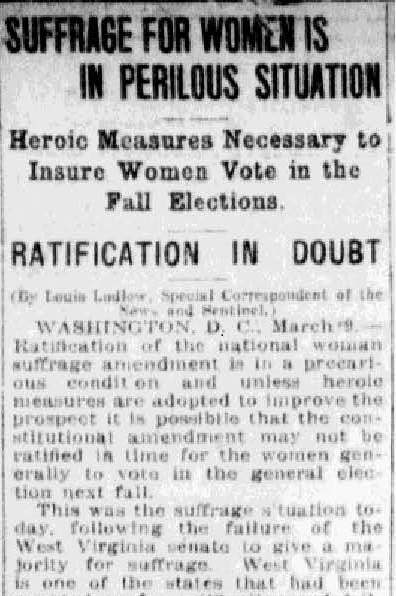 The rollercoaster careened again on April 1 when Mississippi and Delaware kiboshed the amendment as reported by the Kalamazoo Gazette.

The vote may have an enormous effect on the 1920 election in the United States, as the suffrage movement, though it needs but one more state ratification to make it a part of the constitution, can not now be finally approved before next winter.

Two months later, when the Republican Convention met in Chicago from June 8 to 12, events were on the boil. On the 11th the New Orleans Times-Picayune informed its readers that “Women suffragists continue to play a spectacular part at the convention.” They picketed every entrance to the Coliseum with banners aloft.

By summer all eyes were on Tennessee which had become the final skirmish in the battle for women’s suffrage. The activists decided to accept the governor’s date of August 9 for a special session of the legislature to take up the question of the amendment. However, they worried that the “Republican members…may block ratification of the amendment, as did Democratic members in Delaware.” The Salt Lake Telegram reported, “To thwart this, they say, they will throw their strongest forces into Tennessee immediately.”

On August 11 the Charlotte Observer headlined an article, “Outlook Not Encouraging to Women’s Cause. Alleged Suffrage Majority in Tennessee Crumbling.”

There were bumps and burps yet to be endured, but the Charlotte Observer article seems to have been based on spurious information. Let the Kansas City Star represent countless newspapers across the country on August 18 with its headline “VICTORY FOR SUFFRAGE. The Tennessee House Completes the Ratification of Susan B. Anthony Amendment Giving Women the Ballot.”

A grace note of this long battle occurred in the Tennessee vote when the young legislator Harry Burn switched his vote from nay to aye because his mother, Mrs. Febb King Burn, asked him to and that vote carried the day for the nation. As the Charlotte Observer reported on August 30, “Harry’s Happy Tho Ruined by Suffrage Vote. Burn Fears His “Aye” Means “Political Oblivion.” It is a charming account.

To learn more about the history of suffrage as seen in the pages of Early American Newspapers, please contact Readex today.