“We Are Recognized Citizens of This Nation”: Highlights from Black Authors, 1556-1922

The March release of Black Authors, 1556-1922: Imprints from the Library Company of Philadelphia includes Nat Turner’s published confession, the first issue of David Ruggles’ Mirror of Liberty, and a petition to the U.S. Congress for suffrage rights by the National Convention of the Colored Men of America. 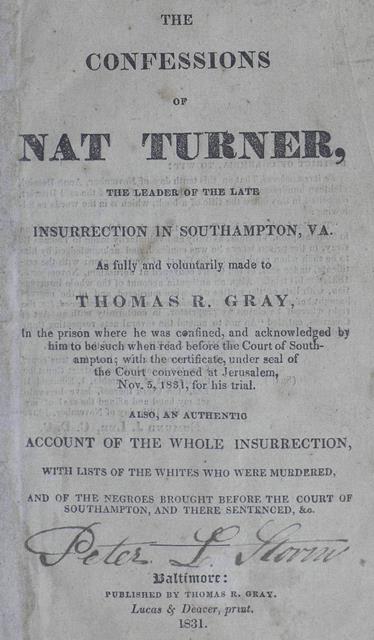 Introducing Nat Turner’s confession, Thomas R. Gray describes how he acquired it and provides evidence of its authenticity. Gray was given access to the imprisoned Turner, who had been captured by “Benjamin Phipps, armed with a shot gun well charged,” and

…finding that he was willing to make a full and free confession of the origin, progress and consummation of the insurrectory movements of the slaves of which he was the contriver and head; I determined for the gratification of public curiosity to commit his statements to writing, and publish them, with little or no variation, from his own words. That this is a faithful record of his confessions, the annexed certificate of the County Court of Southampton, will attest.

Before presenting Turner’s account, Gray shares his perspective on the recent manifestation of many white southerners’ greatest fear, a slave insurrection. He writes:

It is the first instance in our history of an open rebellion of the slaves, and attended with such atrocious circumstances of cruelty and destruction, as could not fail to leave a deep impression, not only upon the minds of the community where this fearful tragedy was wrought, but throughout every portion of our country, in which this population is to be found.

It will thus appear, that whilst every thing upon the surface of society wore a calm and peaceful aspect; whilst not one note of preparation was heard to warn the devoted inhabitants of woe and death, a gloomy fanatic was revolving in the recesses of his own dark, bewildered, and overwrought mind, schemes of indiscriminate massacre to the whites….No acts of remembered kindness made the least impression upon these remorseless murderers….Never did a band of savages do their work of death more unsparingly….Nat has survived all his followers, and the gallows will speedily close his career. His own account of the conspiracy is submitted to the public, without comment. It reads an awful, and it is hoped, a useful lesson, as to the operation of a mind like his, endeavoring to grapple with things beyond its reach.

Readers of Turner’s confession can make their own evaluation of his mental acuity. 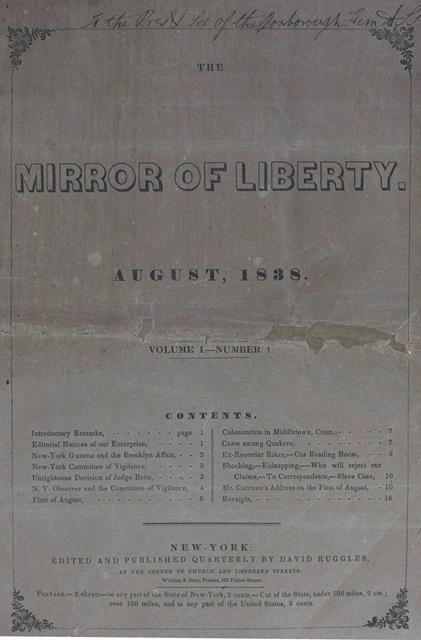 The Mirror of Liberty was the first magazine owned and edited by an African American. David Ruggles was an abolitionist and conductor on the Underground Railroad. He claimed to have led over 600 fugitive slaves to freedom, including Frederick Douglass. In The Mirror of Liberty’s first edition, Ruggles outlines his periodical’s scope:

The character of this periodical is expressed in the title chosen for its name. It will go for Truth and Equal Liberty. It will vindicate outraged human nature at all times, in season and out of season. It will never attempt to treat questions of public interest in a manner to avoid giving offence to men, when principle is involved; even if we possessed that art, we question the propriety of describing errors without showing the actors with them.

The greedy appetite of scandal and abuse shall never be satisfied in the columns of this journal, though Truth shall be decked in her natural habiliments of plainness, which will require no sacrifice.

The Mirror is consecrated to the genius of liberty. It is trammeled by no sect, association, or company of men; but is, in a word, a free and independent journal. It will endeavor to avoid the fatal error of flattery at all times and on all occasions; but will vindicate right and expose error and the existing evils, which evidently obstruct the pathway to that consummation so long desired by a scattered…and down-trodden people.

By National Convention of the Colored Men of America. National Executive Committee 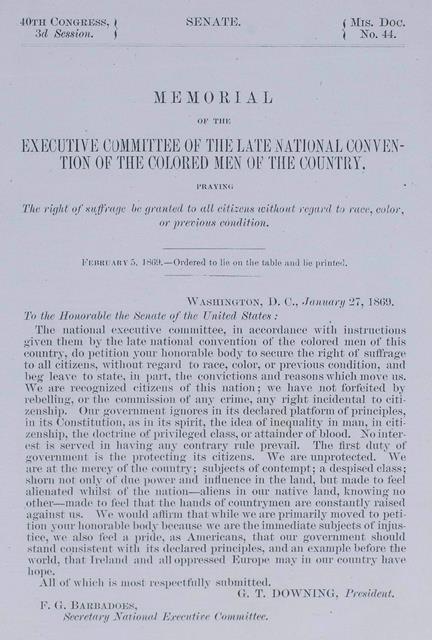 In February 1869 this petition of the National Executive Committee of the National Convention of the Colored Men of America was ordered to be printed and made part of the U.S. Congressional Serial Set. The petitioners, seeking suffrage rights, were rewarded twenty days after their memorial was heard. Before the end of the month the proposed text of what would become the Fifteenth Amendment was approved by the House and by the Senate. The petition reads in part:

The national executive committee, in accordance with instructions given them by the late national convention of the colored men of this country, do petition your honorable body to secure the right of suffrage to all citizens, without regard to race, color, or previous condition, and beg leave to state, in part, the convictions and reasons which move us. We are recognized citizens of this nation; we have not forfeited by rebelling, or the commission of any crime, any right incidental to citizenship. Our government ignores in its declared platform of principles, in its Constitution, as in its spirit, the idea of inequality in man, in citizenship, the doctrine of privileged class, or attainder of blood. No interest is served in having any contrary rule prevail. The first duty of government is the protecting [of] its citizens. We are unprotected. We are at the mercy of the country; subjects of contempt; a despised class; shorn not only of due power and influence in the land, but made to feel alienated whilst of the nation—aliens in our native land, knowing no other—made to feel that the hands of countrymen are constantly raised against us. We would affirm that while we are primarily moved to petition your honorable body because we are the immediate subjects of injustice, we also feel a pride, as Americans, that our government should stand consistent with its declared principles, and an example before the world, that Ireland and all oppressed Europe may in our country have hope.