“What appears to be wise and right”: Highlights from Afro-Americana Imprints, 1535-1922 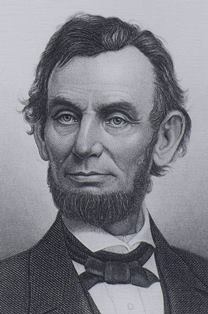 This month’s release of Afro-Americana Imprints, 1535-1922: From the Library Company of Philadelphia includes works illustrating various forms of internal strife caused by slavery and the opposition to it. Highlighted here—in George Washington's "Last Will and Testament," a book by an Irish abolitionist, and a compilation of the wisdom of Abraham Lincoln—are examples of conflicting sentiments within an individual, a movement, and a country. 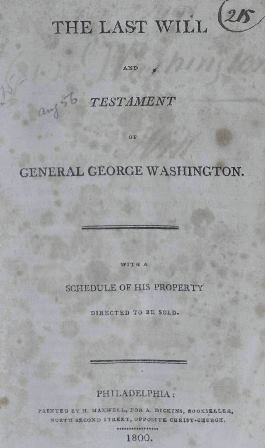 The Last Will and Testament of General George Washington (1800)

Item. Upon the decease of my wife, it is my will and desire that all the slaves which I hold in my own right shall receive their freedom. To emancipate them during her life, would, though earnestly wished by me, be attended with such insuperable difficulties, on account of their intermixture by marriages with the dower negroes, as to excite the most painful sensations, if not disagreeable consequences from the latter, while both descriptions are in the occupancy of the same proprietor; it not being in my power, under the tenure by which the dower negroes are held, to manumit them.

Washington continues, describing the treatment he expects of his slaves upon their eventual emancipation:

And whereas, among those who will receive freedom according to this devise, there may be some, who from old age or bodily infirmities, and others who, on account of their infancy, will be unable to support themselves, it is my will and desire, that all who come under the first and second description, shall be comfortably clothed and fed by my heirs while they live; and that such of the latter description as have no parents living, or if living, are unable or unwilling to provide for them, shall be bound by the court, until they shall arrive at the age of twenty-five years; and in cases where no record can be produced, whereby their ages can be ascertained, the judgment of the court, upon its own view of the subject, shall be adequate and final. The negroes thus bound, are (by their masters and mistresses) to be taught to read and write, and to be brought up to some useful occupation, agreeable to the laws of the commonwealth of Virginia, providing for the support of orphan and other poor children…..And I do hereby expressly forbid the sale or transportation out of the said commonwealth, of any slave I may die possessed of under any pretense whatsoever. And I do moreover, most pointedly and most solemnly enjoin it upon my executors hereafter named, or the survivor of them, to see that this clause respecting slaves and every part thereof, be religiously fulfilled at the epoch at which it is directed to take place, without evasion, neglect, or delay, after the crops which may then be on the ground are harvested, particularly as it respects the aged and infirm; seeing that a regular and permanent fund be established for their support as long as there are subjects requiring it; not trusting to the uncertain provision to be made by individuals. 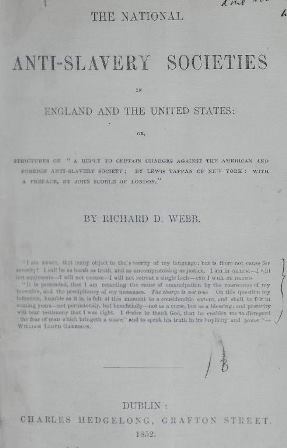 Born in Ireland in 1895, Richard Davis Webb was a cofounder of the Hiberian Antislavery Association. In this work, Webb writes:

Shortly after the formation of our Dublin Anti-Slavery Society, some of the members called to remonstrate with me against opinions I had expressed in reference to the British and Foreign Anti-slavery Society, and its secretary, John Scoble, in the columns of the New York Anti-slavery Standard. They considered we had no business with the management or conduct of any anti-slavery society but our own; that whatever their course might be, we should leave them to promote the cause in the way they thought best; and, if possible, go on ourselves without contention. It would doubtless be much more agreeable, if we could dispense with contention in the prosecution of this or any other cause. But the anti-slavery cause is essentially antagonistic. That it is difficult to avoid collision with others in the promotion of anti-slavery objects, is shown by the fact, that the very person who was most earnest in deprecating any unfriendly reference, on my part, to an anti-slavery society in which he has confidence, has taken special pains to circulate amongst the members of our society, a pamphlet containing many severe remarks upon myself, charging me with deliberate untruthfulness, and calculated, where its statements are believed, to produce a most unfavorable impression against many whom I esteem among the ablest and most devoted friends of the slave. 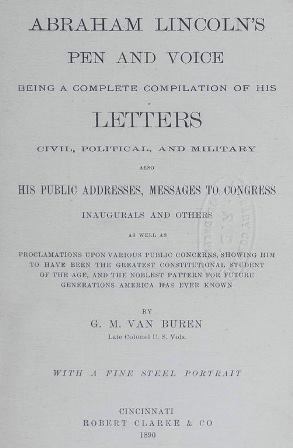 Abraham Lincoln's Pen and Voice: Being a Compilation of His Letters, Civil, Political, and Military, also his Public Addresses, Messages to Congress, Inaugurals and Others (1890)

As seen in this compilation’s full title, the editor of this late 19th-century collection of Lincoln’s writings believed him “to have been the greatest constitutional student of the age.” Below, after the editor’s brief introduction, are excerpts are from Lincoln’s “Remarks Respecting the Issue of the Proclamation, September 13, 1862."

The President gave an audience to a deputation from all the religious denominations of Chicago, presenting a memorial for the immediate issue of an emancipation proclamation, which was enforced by some remarks by the chairman. The President replied:

The subject presented in the memorial is one upon which I have thought much for weeks past, and I may even say for months. I am approached with the most opposite opinions and advice, and that by religious men, who are equally certain that they represent the Divine will. I am sure that either the one or the other class is mistaken in that belief, and perhaps, in some respect, both. I hope it will not be irreverent for me to say that if it is probable that God would reveal his will to others, on a point so connected with my duty, it might be supposed He would reveal it directly to me; for, unless I am more deceived in myself than I often am, it is my earnest desire to know the will of Providence in this matter, and if I can learn what it is, I will do it. These are not, however, the days of miracles, and I suppose it will be granted that I am not to expect a direct revelation. I must study the plain physical facts of the case, ascertain what is possible, and learn what appears to be wise and right.”

Confiding a sense of powerlessness and dissension within himself, Lincoln muses:

What good would a proclamation of emancipation from me do, especially as we are now situated? I do not want to issue a document that the whole world will see must necessarily be inoperative, like the Pope’s bull against the comet. Would my word free the slaves when I can not even enforce the Constitution in the rebel states?