“When Is a Slave Rightfully a Slave?”: Highlights from The American Slavery Collection, 1820-1922 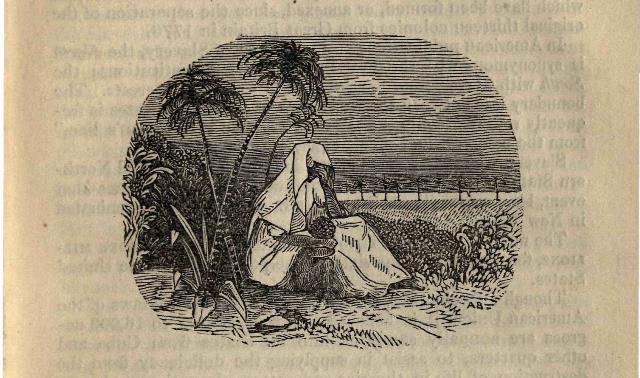 The September release of The American Slavery Collection, 1820-1922: From the American Antiquarian Society includes diverse perspectives on America’s peculiar institution. Highlighted below are an Englishman’s assessment of American slavery and the abolition movement as well as a juxtaposition of the morality of slavery as described in the Bible against its practice in the American South. Also included is a speech by Ohio Representative Joshua Reed Giddings in which he opposes any compensation to the slave traders who claimed losses due to the Amistad mutiny. 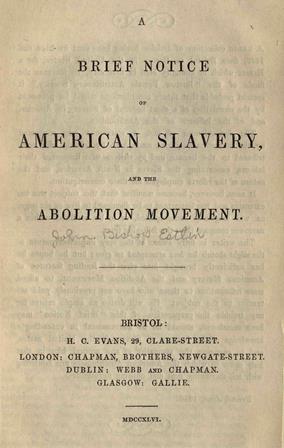 A Brief Notice of American Slavery, and the Abolition Movement (1846)

John Bishop Estlin of Bristol, England, was an ophthalmic surgeon and fellow of the Royal College of Surgeons of England. His only daughter, Mary Anne Estlin, became a prominent British abolitionist and traveled to the United States where she met Susan B. Anthony and other activists. Estlin wrote this work to support the Boston Female Anti-Slavery Society and in hopes of bringing “into view the leading features of American Slavery and the Abolition Movement, afford[ing] some information to those who have not previously paid attention to the subject.”

Describing the domestic slave trade within the U.S., which Estlin referred to as, “one of the most criminal and revolting departments of this nefarious institution,” he wrote:

Many planters in those Slave States which lie farthest north, whose land has been used up by the wastefulness inseparable from Slave labour, and who have not sufficient employment for the whole of their Slave population, breed them for the market,—selling them, and driving them to their place of destination, much in the way that English farmers breed, sell, and transport cattle to various localities. The immorality necessarily attendant upon this system, the cruelty of separating husband and wife, parent and child, brothers and sisters, friends and acquaintance, to say nothing of the degradation of the auction mart, or the hardships incident to the transportation to distant places, need not be insisted on.

Ganse argues these different systems of slavery are not easily comparable, drawing a distinction between holding in slavery those who became “a slave by wrong and violence” and “merely holding as a slave one who is rightfully a slave.” He continues: 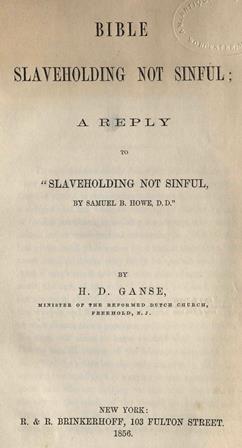 When is the slave rightfully a slave? Just here cases of conscience may easily occur. Some of our forefathers, for example, who received the Guineamen fresh from the hold of the slave-ship, might possibly have doubted very painfully whether those men were rightfully slaves. Some of their descendants, who have inherited the institution, thought they hold themselves ready to resolve such a difficulty very promptly, and would by no means own a man who had once been free, still perplex themselves about his children, and cannot decide at what generation the wrong of the ancestor’s capture dies out, and the bondage becomes right. While others of them, with consciences perhaps over tender, and with narrow views, can never forget how the relation began, and confess before God that time can never justify it. Now, if the Bible countenances slavery at all, as we hold it does, it must have left us the means by which any intelligent and candid man can clear up all such doubts as these, and decide the fundamental question above proposed, namely, When is a slave rightfully a slave? For when he is, of course you may hold him. 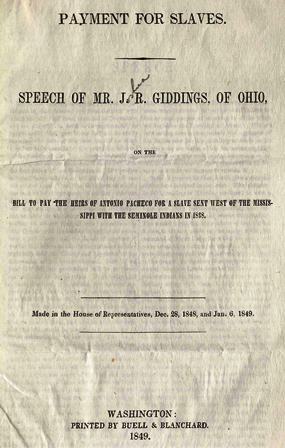 On Dec. 21, 1853, Representative Joshua Reed Giddings rose “to call the attention of this body and of the country to that portion of the President’s message which recommends to our favorable consideration the claims of certain Cuban slave dealers. They profess to have owned the people on board the schooner Amistad, who, by their own valor, regained their freedom in 1839. The President desires that we shall make the necessary appropriation to pay the slave merchants for the loss of their contemplated profits.”

Giddings deconstructs the president’s position by challenging both the facts of the case as presented and the interpretations of the treaties cited. He then makes an appeal to emotion, saying:

Principles are uniform and universal, and should guide statesmen in all cases. He who holds “that all men are created equal,” will never deny that these Africans were clothed with all the attributes inherent to our race; he who holds “that all men are endowed by their Creator with the inalienable right to liberty,” will never vote to pay those Spanish slave dealers for their failure to enslave those whom God had granted the inestimable boon of freedom; he who holds “that this Government was constituted to secure the right of life, liberty, and happiness,” to the people, will never vote to prostitute its powers to encourage the slave trade, to maintain oppression, or dishonor our race.