From 230 years ago, as reprinted in the New-York Gazetteer or Northern Intelligencer on the first of September 1783: 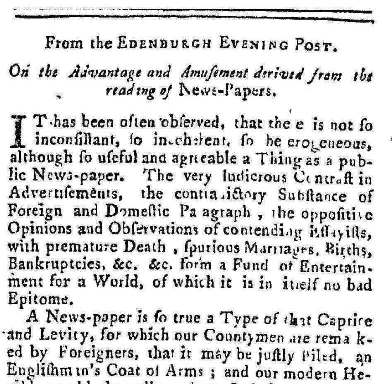 Click to open full article n PDF.
"The four Winds (the Initials of which make the Word News) are not so capricious or so liable to change, as our public Intelligencers; we have on Monday Morning, a Whisper---on Tuesday, a Rumour---on Wednesday, a Conjecture---on Thursday, a Probable---on Friday, a Positive---and on Saturday, a Premature. And thus are our Hopes and Expectations, for five Days regularly, and almost mechanically increased, till the sixth compliments us with a total Disappointment.

"Its Defects, however, bear no Comparison to its Beauties, which are equally celebrated in the Court as on the Taylor's Shop-board. It is a Caricature, happily calculated to hit the ordinary and unbounded Prejudices of Society. One person's Affections lie in the Price of Stocks, and the Arrival of our East and West-India Fleets; another's in a dreadful Battle, either by Sea or by Land, in which he solaces himself that he can read the Account free from its Dangers; a third places his Delight in a curious Anecdote; a fourth in a Tale of Scandal; a fifth, in Horse Races; a sixth, in theatrical Intelligence; a seventh, in Songs and Poetry; and I really know a Person of a humane Disposition, whose inward Feelings are gratified in a Degree proportioned to the bloody Circumstances that accompany the Relation of a Murder. Thus is a News-paper, a Magazine, or a Toy-Shop, where every one has his Hobby-Horse; and thus all Capacities and Descriptions are periodically furnished with Instruction, Amusement and Information. Without it, Coffee Houses, Ale-Houses, and Barbe'rs-Shops, would undergo a Change next to Depopulation; and our country Villagers, the Curate, the Exciseman, and the Blacksmith, would lose the Self-Satisfaction of being made as wise as our first Minister of State."