An African Queen, Inside Monticello, a Reconstructionist Reversal, and Recollections of an Underground Railroad Conductor: Highlights from Afro-Americana Imprints, 1535-1922 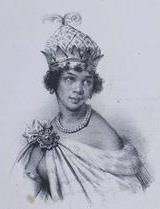 The September release of Afro-Americana Imprints, 1535-1922: From the Library Company of Philadelphia includes descriptions of the Kingdom of Matamba and its powerful Queen Anna Zingha; the private life of Thomas Jefferson, as recalled in the 1860s by a former chief overseer; South Carolina during Reconstruction, recorded by the Washington correspondent of the New York Tribune; and the Underground Railroad, written by a former conductor. This release also includes In the Wilds of Africa, an exciting adventure tale replete with detailed illustrations.

Memoirs of Celebrated Women of All Countries (1834)
By Laure Junot, Duchess of Abrantes

Laure Junot, Duchess of Abrantes was an early 19th century French writer known for her attractiveness, extravagance, and sharp tongue. In this volume, Junot includes a biography of Anna Zingha, Queen of the Kingdom of Matamba, located in what is now Angola. Junot covers Queen Zingha’s rise to power and struggle with the Portuguese for control of her country. She describes the funeral ceremony for Zingha’s father in graphic detail: 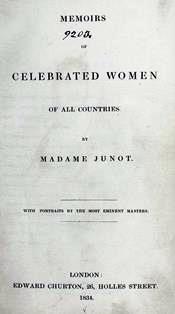 Her father died, and his funeral was such as became an African king professing the religion of the Giagas. Two hundred innocent human beings were put to death and eaten at the funeral banquet; and the glory of the deceased monarch was celebrated, during the tombo, by the songs of the slayers, mingled with the cries and screams of the women, children, and old men serving as victims, many of whom fell by the hand of Zingha herself, who would sing praises to her gods as she pierced the bosom of a young girl and drank her blood.

Nevertheless, she assisted in these ceremonies with strong repugnance, as she afterwards declared. She had a horror of feasting on human flesh, and of libations of blood. But she was ambitious and vindictive: she would have both the throne and revenge on her enemies; and to obtain these she required strength, which, as she well knew, existed only in the people. She therefore flattered the passions and prejudices of the multitude. For a short time, however, she thought she might obtain support from the Christians; and here the extraordinary genius of this woman began to appear.

Hamilton Wilcox Pierson was born in western New York State in 1817; he graduated from both Union College in Schenectady and Union Theological Seminary in New York City. Pierson hoped to work in Africa as a missionary but, because of poor health, was only able to travel as far as Haiti. He worked for the American Tract Society and the American Bible Society before becoming the President of Cumberland College in Kentucky. While president of the college in the early 1860s, Pierson sought out the chief overseer of Monticello, Captain Edmund Bacon, who offered his recollections of life at Jefferson’s home.  According to Pierson, he “obtained from [Bacon] a large mass of letters and other documents in Mr. Jefferson’s own handwriting giving directions as to his farm, grounds, garden, stock of different kinds, and all the various matters connected with his farm at Monticello.” Pierson also included a chapter on Jefferson’s “servants” and their relationship with Jefferson:

Mr. Jefferson was always very kind and indulgent to his servants. He would not allow them to be at all overworked, and he would hardly ever allow one of them to be whipped. His orders to me were constant, that if there was any servant that could not be got along with without the chastising that was customary, to dispose of him. He could not bear to have a servant whipped, no odds how much he deserved it.

Later, in a section about Jefferson’s desire to free his slaves upon his death, Pierson brought up a subject that continues to intrigue historians:

Mr. Jefferson freed a number of his servants in his will. I think he would have freed all of them, if his affairs had not been so much involved that he could not do it. He freed one girl some years before he died, and there was a great deal of talk about it. She was nearly as white as anybody, and very beautiful. People said he freed her because she was his own daughter. 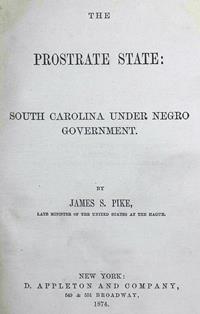 From 1850 to 1860 James Shepherd Pike was the chief Washington correspondent of the New York Tribune. Pike served as a minster to the Netherlands during the Civil War, but returned to Washington in 1866 and resumed writing for the Tribune. He was an outspoken Republican who believed freed slaves must be given the vote. He also supported the disqualification of most ex-Confederates from holding political office. However, by 1872, Pike had become disenchanted with both the Republican Party and suffrage for African Americans because of the corruption and failures of Reconstruction. Pike denounced the Grant Administration and supported New York Tribune editor Horace Greeley as a presidential candidate in 1872. Greeley not only lost in a landslide but also died less than a month after the election, making him the only presidential candidate to have died prior to the counting of the electoral votes. The new editor of the Tribune, Whitelaw Reid, dispatched Pike to South Carolina to write about the conditions in the South under Reconstruction. The series of articles Pike produced were compiled and republished in book form in 1874; Pike summarized his view of Reconstruction and South Carolina in the preface of this work, writing:

I have no positive theory in regard to the future of South Carolina. Fifteen years ago, when emancipation seemed distant, I ventured the prediction that the Gulf States would finally have to be surrendered to the blacks; but the abolition of slavery having been suddenly precipitated, the conditions of the problem have become changed. Yet there are those who believe such is now the inevitable fate of several of the Southern States, South Carolina included. In the following pages I have combated this sentiment as regards South Carolina, and have pointed out the method by which it seems to me its Africanization can be prevented, and suggested some of the considerations which should inspire an effort to prevent such a result. But it may turn out that there is a wide difference between what can be done and what will be done. The white people of South Carolina may permit what they might prevent. The decision of the case rests mainly with them. But their course in the present crisis of their fortunes is not a matter of interest to themselves alone; it deeply concerns the people of the other States, and it is their attention that I invoke to the following exposition. The facts challenge the thoughtful consideration of every man who does not believe that our political system can stand any thing and defy any thing. 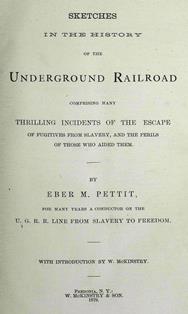 Sketches in the History of the Underground Railroad (1879)
By Eber M. Pettit

Eber Pettit was an abolitionist and conductor on the Underground Railroad; he brought fugitive slaves from Pennsylvania and Ohio through his hometown of Fredonia, New York, and onto freedom in Canada. After the Civil War, Pettit’s memoirs were serialized in the Fredonia Censor, and in 1879 the Censor’s editor, Willard McKinstry, re-issued the work as a book. In his introduction to Pettit’s Sketches in the History of the Underground Railroad, McKinstry said the sketches were published “with a view to the perpetuation of the personal recollections of a period in our history which, thanks to the Proclamation of our martyred President, can never in the history of this country be repeated.”

Pettit described the operation of the Underground Railroad as well as the risks and penalties the conductors faced under the Fugitive Slave Act of 1850:

Good men in the Slave states were silent, having no means of redress; the laws and public opinion were on the side of the slave holder. The free States remonstrated and petitioned Congress to adopt measures for emancipation. The South assumed the political doctrine of State rights, which means that State laws are paramount to U.S. laws. But when the northern States enacted laws to protect their own citizens against kidnappers, it was found that ‘State Rights’ applied only to slave States. As the free States persisted in protecting their citizens the slave States demanded the enactment of the Fugitive Slave Law, which was passed in 1850, establishing commissions and courts unknown to the Constitution, and was undoubtedly the most barbarous law enacted by any civilized nation in the 19th century.

The most simple act of charity to a fugitive must be kept a profound secret or the felon’s cell was the penalty. The result was a spontaneous combination of multitudes of men and women, extending from Maine to Kansas, with many a station south of Mason & Dixon’s line, which on account of its harmony of action, rapid transit and secret operation, came to be known as the ‘Underground Rail Road.’

The Underground R.R., extending from the interior of the slave States to Canada, and to liberty, wherever human liberty could be found, had four main lines across the State of New York, and scores of laterals. It has finished its mission, closed its operations, settled its accounts and divided the proceeds among the passengers. The immense wealth thus accumulated was invested in the purchase of large tracts of land in Canada, clearing up, stocking and cultivating farms, buildings, dwellings, barns, churches and school houses, mills and factories.

No institution has ever existed in this country, whose business was transacted with more perfect fidelity, more profound secrecy, more harmony in the working of its complicated machinery and yet with such tremendous results.

It had, like all other rail roads, its offices and stations, engineers and conductors, ticket agents and train dispatchers, hotels and eating houses. The fugitive slave law passed by Congress in 1850, imposed a penalty of $1,000 fine and imprisonment for selling or giving a meal of victuals to one of the passengers on this road, or for helping them on their way. Disregarding these penalties, the eating houses were open day and night, and well supplied with the best food the country afforded.

In the Wilds of Africa: A Tale for Boys (1884)
By William Henry Giles Kingston

Kingston’s In the Wilds of Africa is not only an exciting adventure story but it is also dramatically illustrated: 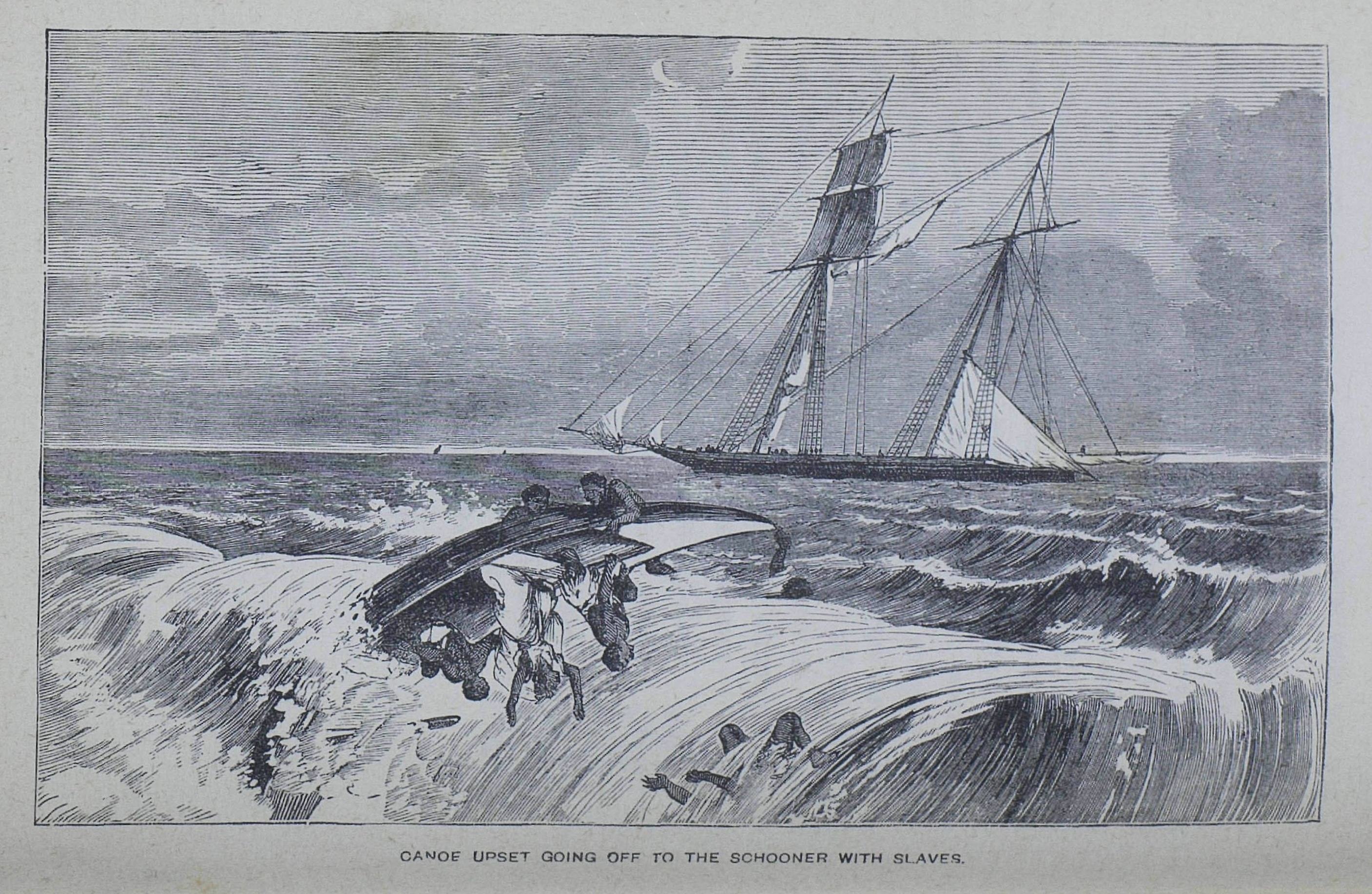