Readex to Launch Digital Edition of Caribbean Newspapers
New collection is essential for research on Colonial history, the slave trade and the Atlantic region

September 19, 2013 (NAPLES, FL) — The digital collection Caribbean Newspapers, Series 1, 1718-1876: From the American Antiquarian Society will be introduced in October 2013 by Readex, a division of NewsBank. This new online resource—the largest of its kind--will chronicle the evolution of the Caribbean region across two centuries, providing a comprehensive primary resource for studying the development of Western society and international relations within this important group of islands. “With more than 140 Spanish, French, Danish, and British titles—all available for the first time in a fully searchable database—Caribbean Newspapers promises to transform scholarship on the eighteenth and nineteenth-century West Indies,” says Eliga Gould, Chair of the History Department and Professor of History, University of New Hampshire. “It’s going to be a real game changer."

Created in cooperation with the American Antiquarian Society—one of the world's largest and most important newspaper repositories—this collection will provide students and scholars with easy access to more than 150 years of Caribbean and Atlantic history, culture and daily life. Featuring publications from 22 islands, Caribbean Newspapers will provide complete facsimiles of every available issue, including eyewitness reporting, editorials, legislative information, letters, poetry, advertisements, obituaries and other news items. Most of these newspapers were published in the English language, but a number of Spanish-, French-, and Danish-language titles are also provided. Countries represented include Antigua, Bahamas, Barbados, Cuba, Curaçao, Dominica, Grenada, Guadaloupe, Haiti, Jamaica, Martinique, Montserrat, Nevis, Puerto Rico, St. Bartholomew, St. Christopher, St. Lucia, St. Vincent, Tobago, Trinidad, and the Virgin Islands. Also found within this resource are newspapers from Bermuda, an island not technically part of the Caribbean, but situated on shipping routes between Europe and this region and integrally related to its history 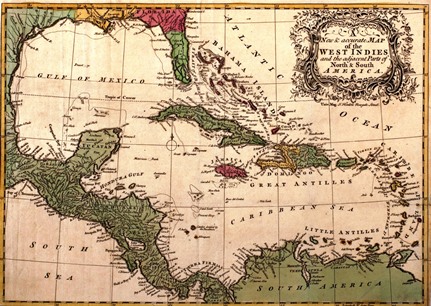 “Caribbean Newspapers is an astoundingly important new source,” says Deborah Jenson, Haiti Lab, Franklin Humanities Institute, Duke University. “For the first time, big data meets the intellectual and cultural history of the Caribbean. From Antigua to Haiti, and Jamaica to Barbados, Caribbean Newspapers promises to reveal the local color and spirit of the times of a region as fascinating as it is historically elusive.”

Ellen Dunlap, President of the American Antiquarian Society, says: “Because American merchants traded so much with the English-speaking West Indies, the AAS since our founding has assembled an outstanding collection of books, pamphlets, and newspapers for research on the Atlantic region. Partnering with Readex to create a digital edition of our Caribbean newspapers will make this unique collection widely available to scholars and students around the world.”

About the American Antiquarian Society
The American Antiquarian Society (AAS) is both a learned society and a major independent research library. The AAS library houses the largest and most accessible collection of books, pamphlets, broadsides, newspapers, periodicals, sheet music, and graphic arts material printed from the colonial period through 1876 in what is now the United States, Canada, and the West Indies. The AAS collections also contain manuscripts and a substantial collection of secondary works, bibliographies, and other reference works related to all aspects of American history and culture before the twentieth century. The library contains more than two-thirds of all known imprints created in America before 1821, making it the single greatest repository of such materials in the world. Additionally, the Society’s holdings of American printed materials dating from 1821 through 1876 are among the strongest anywhere.

About Readex, a division of NewsBank
For more than sixty years, the Readex name has been synonymous with research in historical materials and government documents. Recognized by librarians, students, and scholars for its efforts to transform academic scholarship, Readex offers a wealth of Web-based collections in the humanities and social sciences, including the Archive of Americana, a family of historical collections featuring searchable books, pamphlets, newspapers, and government documents printed in America over three centuries, and the World Newspaper Archive, created in partnership with the Center for Research Libraries. Also available are the Foreign Broadcast Information Service Daily Reports and the Joint Publications Research Service Reports, two of the U.S. government’s fundamental sources of foreign intelligence gathered from publicly available media during the second half of the 20th century.