Anti-Flirtation: There Ought to Be a Law

Anti-Flirtation: There Ought to Be a Law 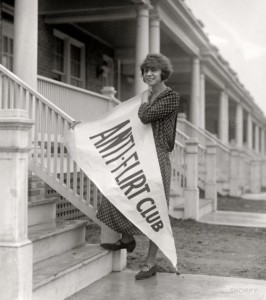 New York Congressman Chris Lee recently was caught not exactly with his pants down but certainly with his shirt off. His online flirtation with an unidentified woman led to his resignation from the United States House of Representatives on February 10th, a few hours after the flirtation emails and accompanying photographs were posted by the Gawker website. In light of the Lee affair, perhaps one might think there really may have been some merit to the Anti-Flirtation legislation first proposed in this country more than a hundred years ago and, for a few decades thereafter, avidly espoused both by elected officials and the women’s Anti-Flirtation League. 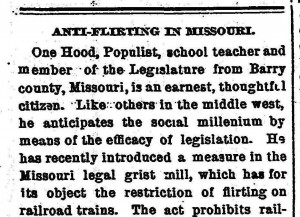 Whether such legislation really would have saved Chris Lee’s political career is, in the end, arguably open to debate. Although flirtation itself probably goes back to Adam and Eve or even further among our ancestors in the animal kingdom, the earliest reference to Anti-Flirtation legislation that I could find is from Missouri in 1897, when a Populist state legislator by the name of Prichard B. Hood, who was then representing Barry County, introduced a bill in the General Assembly to restrict flirtation on railroad trains, which were in a way the Internet of their day. An account of his measure, from as far away as New Jersey, was printed in the Trenton Evening Times of Feb. 8, 1897. 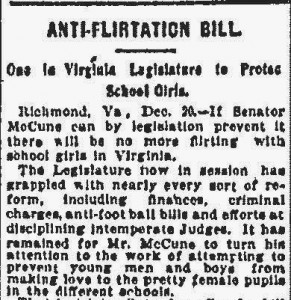 The Commonwealth of Virginia was not to be outdone by Missouri. Virginia State Senator James G. McCune proposed a bill on Dec. 18, 1897, “to make it a misdemeanor…for any man or youth to loiter about any female school or seminary.” McCune, presumably partly in order not to favor one sex over another in his legislative endeavors, had previously presented an anti-football bill. A subsequent legal effort by the Anti-Flirtationists faction occurred in Albany, New York in 1903 as assemblyman Bennett introduced a bill in the Legislature making it a misdemeanor to flirt on a public thoroughfare. In Los Angeles in 1914, then as now a hotbed of flirtation, Patrolman Charles A. Luethke, who had been detailed to prevent flirting in Echo Park, was charged with flirtatious annoyance! A few years later in Washington, D.C., the Anti-Flirt movement moved from legislative chambers to become a burgeoning grass roots movement. The Anti-Flirt Club was founded early in 1923 by Alice Reighley (1891-1973).  Oklahoma Congressman Manuel Herrick in 1923 offered the following advice pointing out that the new organization:

…would fall far short of your opportunity for doing something really worthwhile for the female sex if you do not make your club the nucleus of a nationwide order to be known as the national order of antiflirts.

The Congressman further endorsed the club’s rules which prescribed that girls should not "go out with men they do not know"; should not "annex all the men they can get"; and should not "fall for the slick, dandified cake eater" because "the unpolished gold of a real man is worth more than the gloss of a lounge lizard." 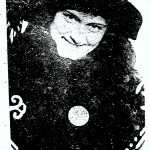 An official insignia—displaying a lizard [a lounge lizard?] pierced by a hatpin—had been adopted by the Anti-Flirt crusaders at a meeting at New York’s Biltmore Hotel. Here in a photograph from the Trenton Sunday Times-Advertiser is Miss Lena Lebow wearing her pin prominently.

And yet flirtation, despite all the efforts of Alice Reighley and her Anti-Flirtation sisters, continues unabated throughout the world and is even practiced by the our nation’s elected representatives, “cake eaters” or not.
Tags
Filed under