The Anti-Mask League of San Francisco: Protesting a Mask-Wearing Ordinance During the 1918 Flu Pandemic

In early 1919 San Francisco was on the brink of a third wave of influenza. On January 10 of that year the San Jose Mercury Herald reported on the increasing number of deaths under the headline, “Masks Are Advised in S.F.”

For the 24 hours ending at 5 o’clock 465 new cases and 41 deaths were reported. Today’s death total reached the highest figure registered since the recurrence of the disease. Yesterday’s totals were 615 new cases and 27 deaths.

The health committee of the board of supervisors will appear before the supervisors tomorrow with a recommendation that the board enact a new municipal ordinance making compulsory the wearing of anti-influenza masks.

One week later the San Diego Union and Daily Bee followed up with this item on the recommended city ordinance:

Thirty-nine deaths from the disease and 519 cases were announced tonight by the board of health. Yesterday’s totals were 42 deaths and 538 cases.

Representatives of citizens’ organizations opposed to the mask wearing ordinance tonight formed the Anti-Mask league. The announced purpose of the league is “to oppose by all lawful means” the compulsory wearing of masks. Officers of the league said a public mass meeting to take action would be called early next week. 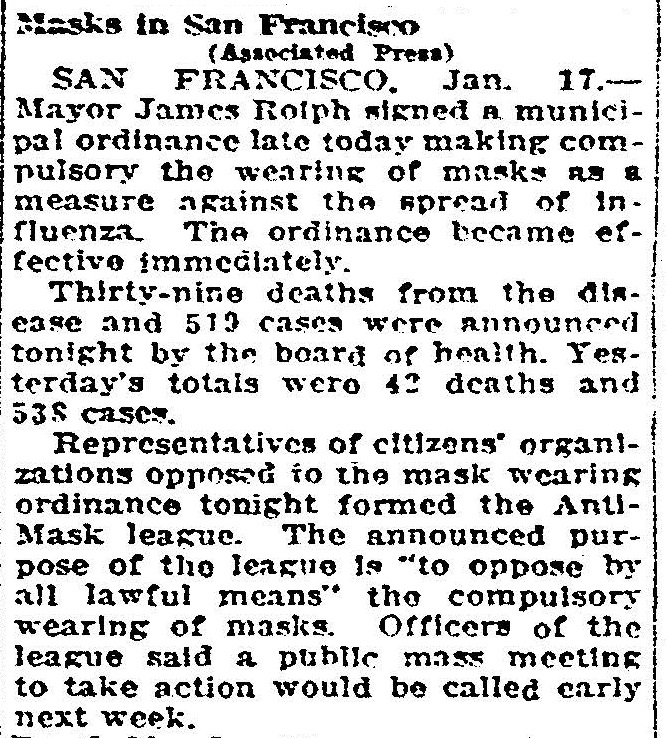 SAN FRANCISCO, Jan. 21.—“Sanitary Spartacans” have broken out in San Francisco in protest of the influenza-mask wearing ordinance. A league was organized last night which is to be known as the “anti-mask” league. At a meeting in the Pacific building $350 was raised to aid in fighting the board of health’s enforcement of the mask wearing ordinance.

Also on Jan. 21, 1919, the Riverside Daily Press published an article on the arrest of protesters in Pasadena who refused to wear masks:

Pasadena, Jan. 21.—Fifty Pasadenans, many prominent, were under arrest here today charged with appearing in public without “flu” masks. The police started enforcement of the “flu” mask ordinance yesterday.

Opposition to mask ordinances was not only a form of political protest against a perceived infringement of the league members’ civil rights. It was also based on both a mistrust of public health officials and a misunderstanding of science. At the Jan. 20 meeting of the Anti-Mask League in San Francisco, members declared “the masks insanitary and useless.”

Reporting on the potential economic ramifications of refusing to wear a mask, the article continues:

The “flu” mask ordinance all but upset the daily program of the Union Iron works today.

Police of the Potrero station, watching near the iron works gate, nabbed 70 violators within a short time. Among these were foremen and expert mechanics. Most of these were soon released on bail. Potrero station officers said that for two days they have been issuing warnings.

Altogether about a hundred had been taken to the Potrero jail at 10 o’clock.

Noting the efficacy of mask wearing in preventing the spread of the virus and the illogic of those opposing, San Jose’s Evening News printed this on Jan. 25:

SAN FRANCISCO, Jan. 25.—Despite the decided decrease in cases the Anti-Mask League will meet tonight. However, all will wear masks.

Dr. Hassler, health officer, is highly optimistic over the success of the mask wearing. The crowded conditions of hospitals have been greatly relieved.

That the masks are beneficial is pointed out by Dr. Hassler in comparison with yesterday’s 85 cases against 538 cases nine days ago.

News of the decreased cases, as well as the apparent hypocrisy of the league members, was also reported in Idaho’s Twin Falls Daily News:

Despite the evident benefit of the masks, the anti-mask league, wearing masks, will meet tonight.

Three days later the number of cases was still declining, and Mayor Rolph repealed the compulsory mask ordinance, as seen in this article from the Seattle Daily Times.

SAN FRANCISCO, Tuesday, Jan. 28.—Unless there is another flareup of influenza in the meanwhile, San Franciscans may doff their gauze masks Friday. Announcement to this effect was made today by Mayor James Rolph, following a demonstration in the city hall here yesterday against the masking ordinance by representatives of the antimask league. The mayor said that the mask had proved its efficacy and pointed out that since the ordinance became effective on January 20, the epidemic had been practically brought under control.

Despite the San Francisco mayor’s optimistic outlook, the third wave of the influenza pandemic would not recede until June 1919—nearly 18 months after the first wave of early 1918.