Baseball in America: Its Origins and Early Days

Some things never change, or so suggested the Duluth News Tribune in 1916:

The origins of America’s national pastime are murky to say the least. How- ever, the contest now recognized as the first officially recorded baseball game in U.S. history took place 165 years ago on June 19, 1846. One thing we know for certain about baseball’s origins is it was not invented by Abner Doubleday in Cooperstown, New York in 1839. The beginnings of baseball are more likely found in earlier games such as rounders, town ball, and old cat. The latter is described in a 1905 Baltimore American article. 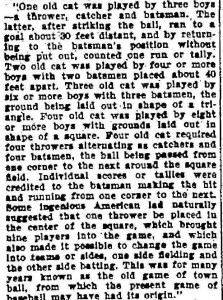 The claim that Doubleday invented the game was disputed at the time it was asserted and adopted by the Mills Commission in 1905, over a dozen years after Doubleday’s death. In fact, according to this Springfield Republican article published in 1908...

According to many baseball historians the earliest mention of the game in America appears in a 1791 Pittsfield, Massachusetts ordinance banning the game from being played within 80 yards of the newly built town meeting house.

The earliest reference to baseball in America’s Historical Newspapers is found in an 1827 New York Commercial Advertiser article about Signor Voarino’s “Treatise on Callisthenic Exercises, arranged for the private tuition of ladies.” Baseball is noted as an alternative to the suggested exercises. 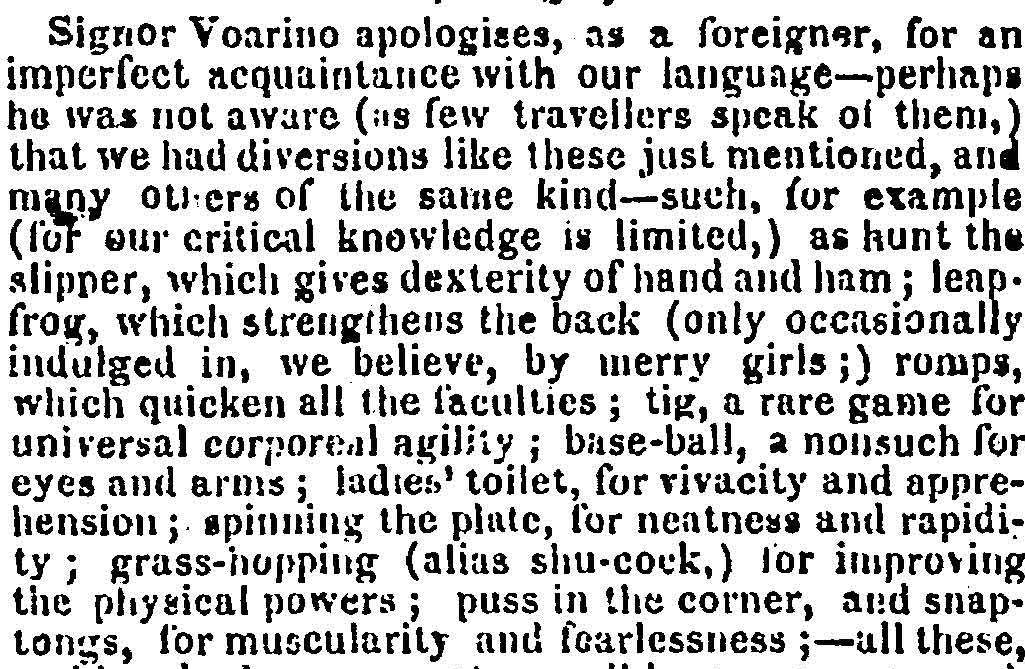 Another early reference to baseball is found in the essay “The Village Belle” by Mary Mitford which was reprinted in several early American newspapers, the earliest of which appeared in The Rhode-Island American in 1828. 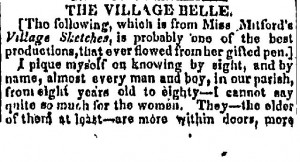 In an interesting historical side note, this article is cited by some historians as being one of the earliest examples of baseball in America. However, this is incorrect. Upon reading the entire essay one finds references to the House of Commons and the Lord Chief Justice, British institutions both. It is entirely likely this essay was not only about an English village but also first appeared nine years earlier, in 1819, as one of Miss Mitford’s “Our Village” sketches in “The Lady’s Magazine,” a British fashion magazine published monthly form 1770-1837.

The most peculiar aspect of all the very early references to the game is that no one seemed to feel it was necessary to describe what they were calling baseball. This suggests that baseball was not considered an altogether new game even at the time. In fact, the game would not be officially described or—more accurately stated—codified for at least another ten years after the historic 1846 game in Hoboken, New Jersey. In 1856, the Knickerbocker Base Ball Club called for a convention of the various clubs of New York City. According to the New York Herald, the convention met in January 1857, “for the purpose of discussing and deciding upon a...

The second annual convention of Base Ball Clubs of New York was held in March 1858 and focused more on the overall organization of the various clubs than on particular rules of the game (New York Herald). Baseball continued to change throughout the late 1800s and by the early 20th century some people had already begun looking back on the earlier game with nostalgia, as seen in this August 1906 article in The Grand Forks Daily Herald.

Another retrospective of the early game is found in this 1894 Plain Dealer article. And, in 1899, the Anaconda Standard published this brief history of the game:

One idea that would have literally changed the course of the game had it caught on is described by the Evening News of San Jose, California, in this 1906 article:

The last 100 years have seen many notable changes to the game: an end to the “dead ball” era in 1919; the widespread introduction of electric lights and night games in the mid-1930s; the official integration of the game in 1947; the extension of the season from 154 games to 162 in 1961; and the adaptation of the designated hitter position by the American League in 1973. One constant, however, especially in the eyes of Red Sox fans, is the conflict between players and the media that is never far below the surface.  In closing, here are two examples of that tension. Early in 1912, Boston sportswriter Herman Nickerson dubbed several players as members of the “Society for the Prevention of Victory.”

And that was after the Red Sox had won the game! Over 50 years later, Ted Williams, the self-described greatest hitter who ever lived, didn’t miss an opportunity to return the insult saying, before his final game, 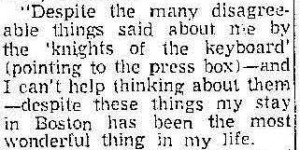