The Beatles Launch the British Invasion: As Covered 50 Years Ago in the American Press

For American teenagers of the millennial generation, it may be difficult to imagine that a band as established as The Beatles was once viewed as exotic. Yet when they landed at Kennedy Airport on their first U.S. tour in February 1964, they were viewed as curious foreigners with a completely fresh sound, humor and style. 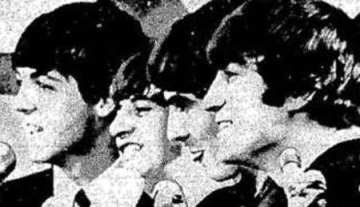 During late 1963, the American press had begun to note The Beatles’ rising popularity in Britain, but coverage dramatically expanded that December when the Beatles reached agreement to appear on America’s most watched variety hour, The Ed Sullivan Show. 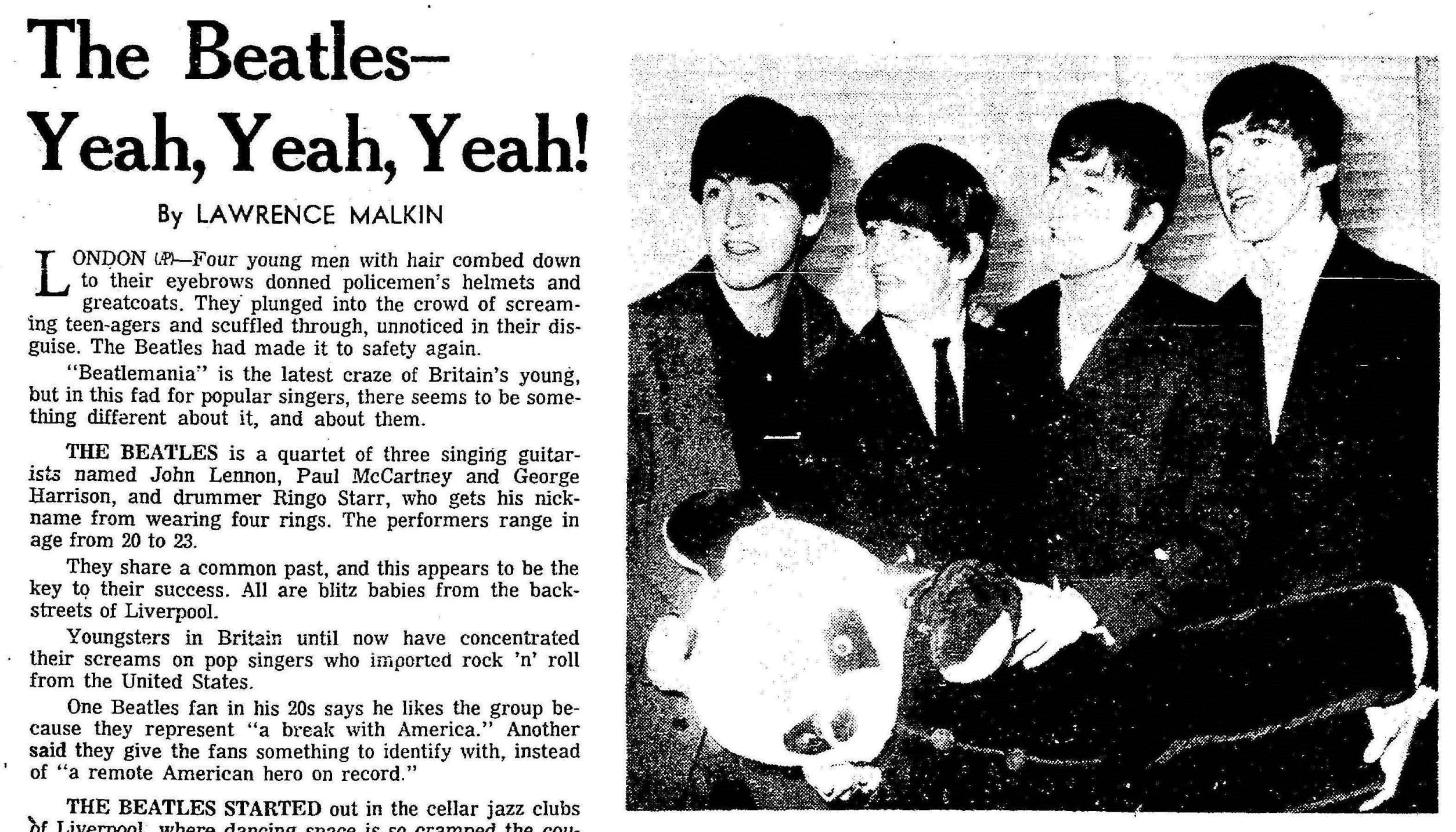 In anticipation of that February 9, 1964, appearance, Capital Records released “I Want to Hold Your Hand” and supported the single with a large promotional campaign. Starting in Washington, D.C., radio popularity grew until the single reached the top of the U.S. charts on February 1, six days before The Beatles were scheduled to arrive at the newly named John F. Kennedy Airport in New York. 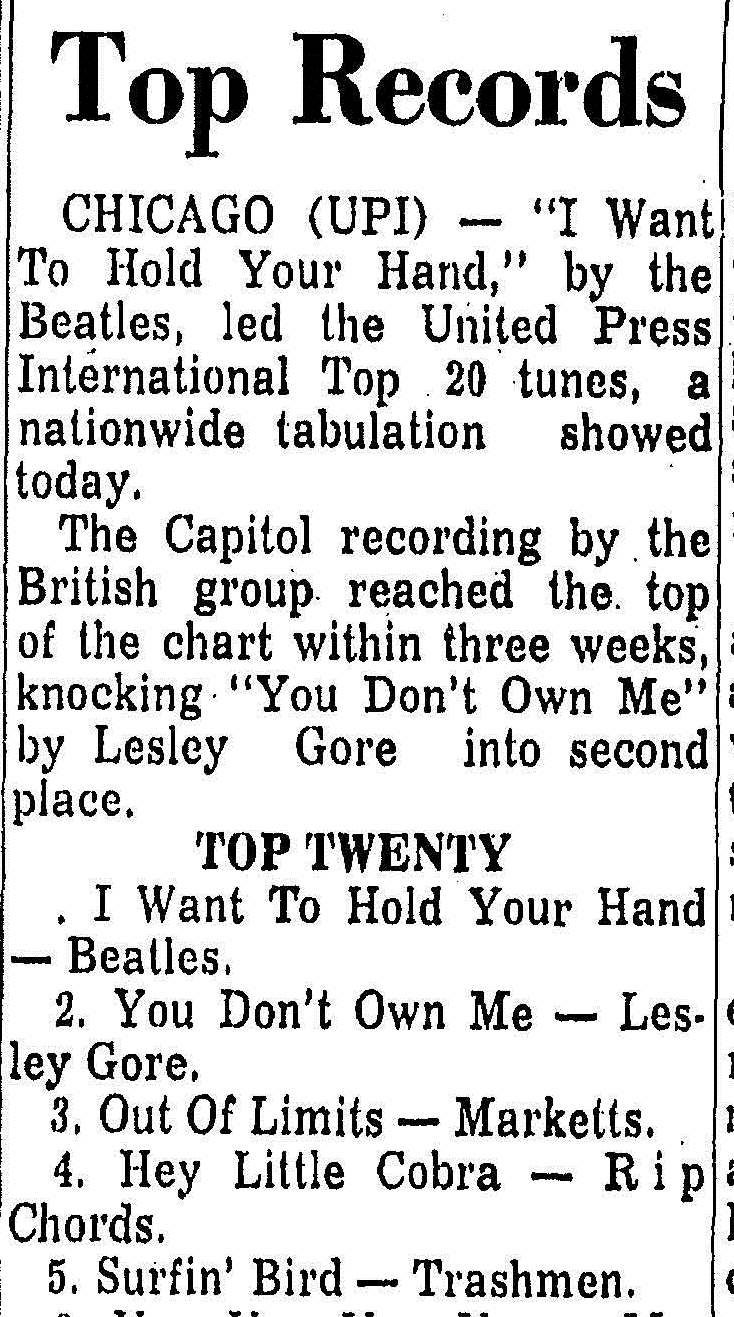 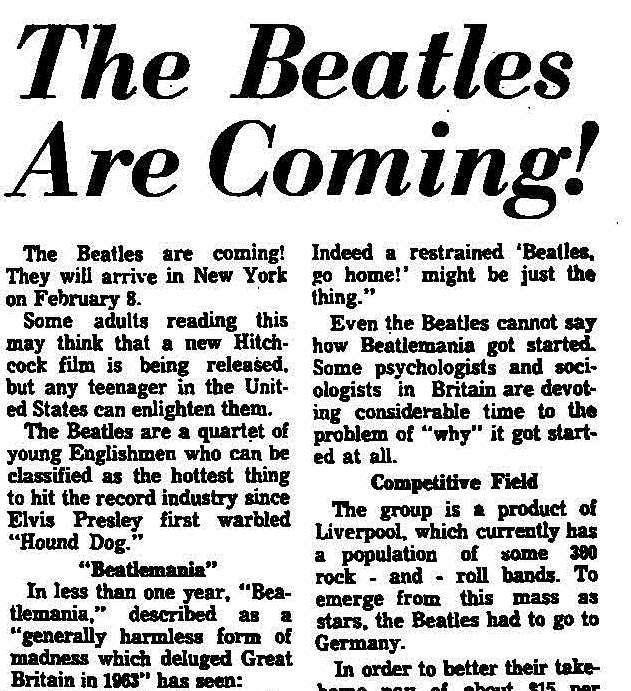 When The Beatles finally arrived in the U.S., they were surprised and thrilled to be greeted at the airport by thousands of screaming fans and hundreds of reporters. 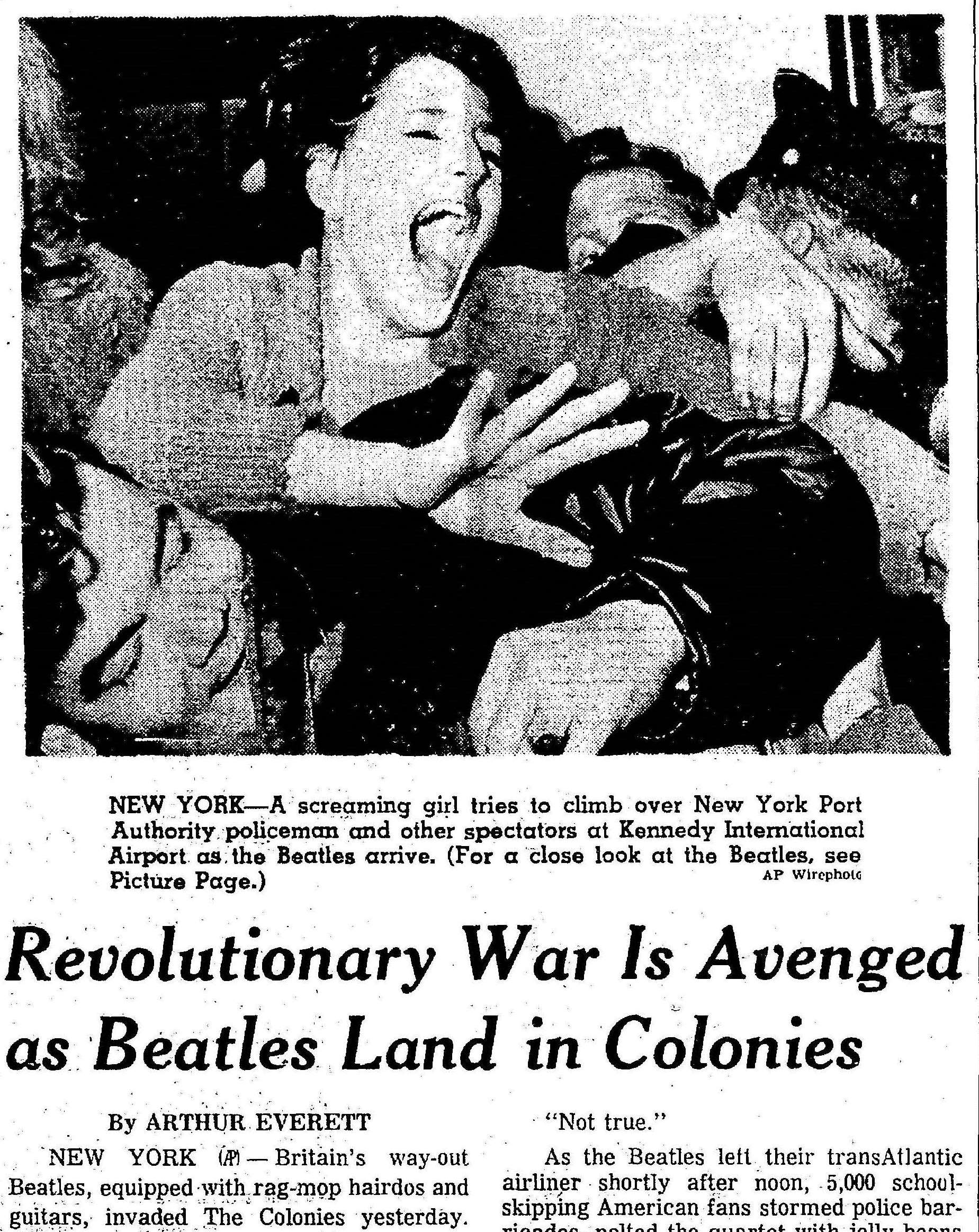 They gave a witty press conference, which was heavily covered on television and in the press, before they were driven to Manhattan’s Plaza Hotel through streets lined with fans. 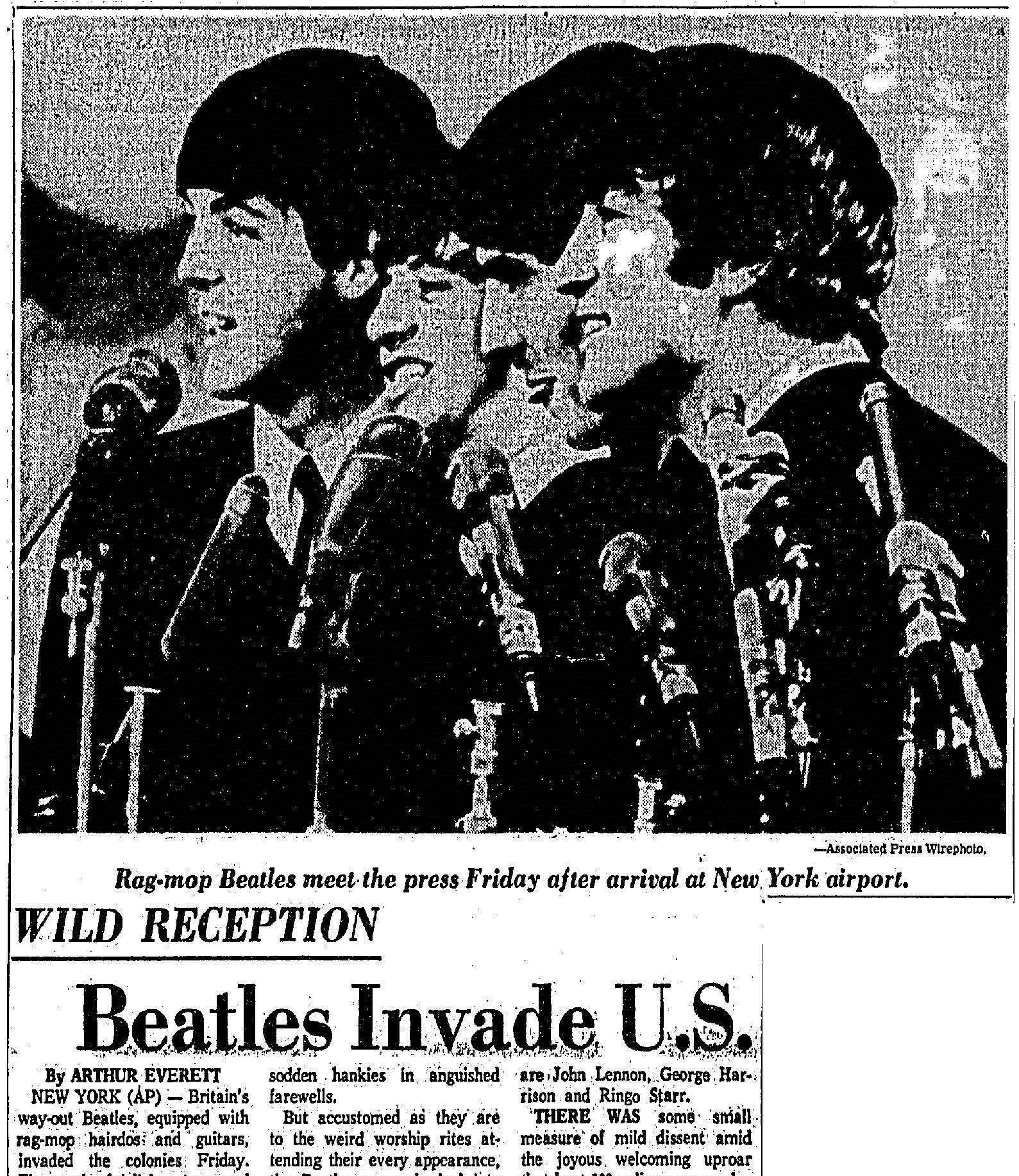 The fresh and appealing music, fashion and humor of the Beatles immediately captivated many American teenage baby-boomers still stunned by the assassination of President Kennedy only a few months earlier. In the days before their performance on The Ed Sullivan Show, the media and fans closely followed the band with a tone that was lighthearted and fun. The promotion in the days preceding their first television appearance could not have been better as their engaging personalities became familiar to fans across the country. 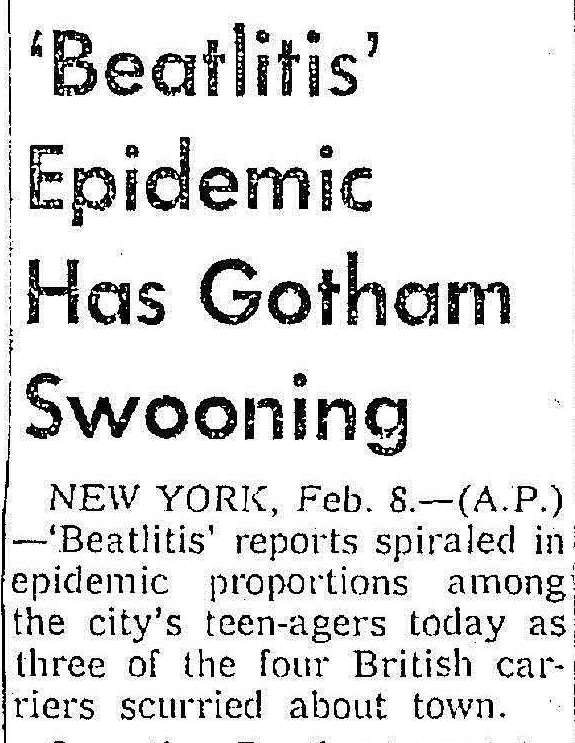 The Ed Sullivan Show had a record viewership the night the Beatles played which greatly increased their popularity among teenagers even if the press still largely covered them more as a cultural phenomenon than musicians. 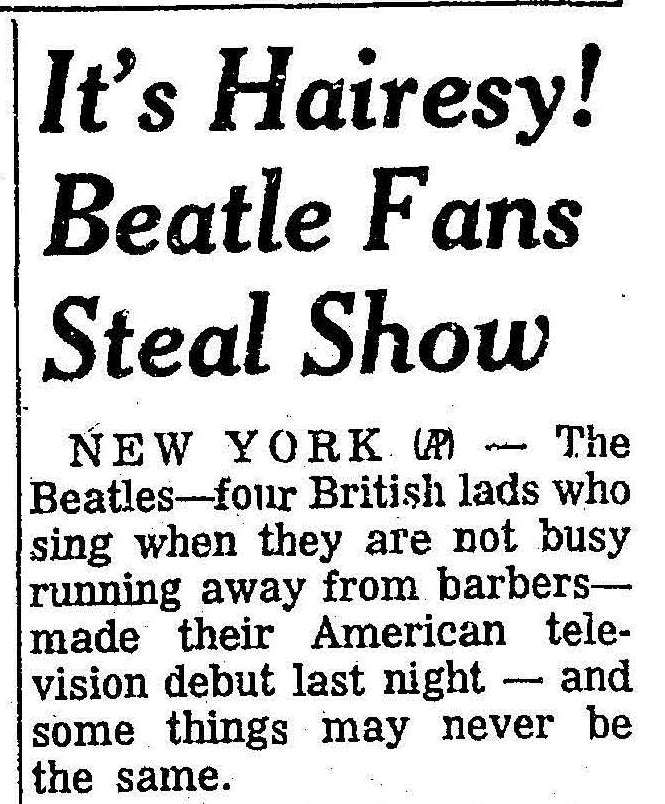 Ed Sullivan himself seemed won over by the Beatles as he praised them on and after the New York show and on a second Ed Sullivan Show performance a week later taped in Miami Beach. 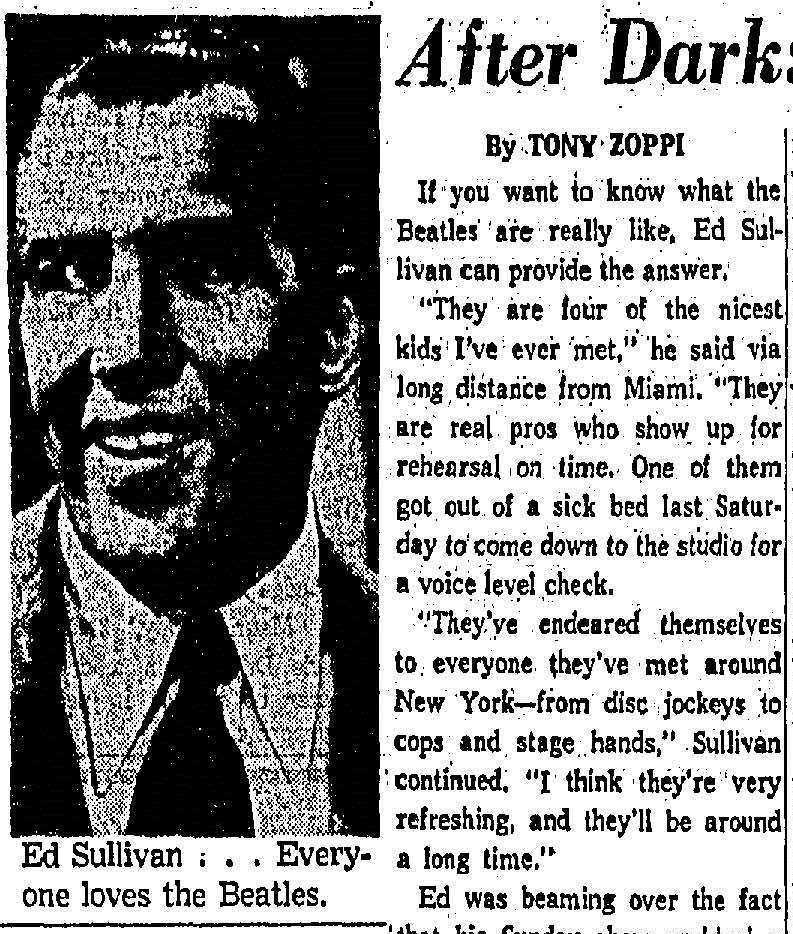 And so began the nearly decade-long phenomenon of The Beatles.  Two weeks after arriving in the U.S., John, Paul, George and Ringo returned to England where they would film their first hugely successful film, “A Hard Day’s Night.”  Their popularity kept up with the baby-boom generation as The Beatle’s music changed and matured along with their fans. The press coverage also evolved through the 1960s as reviewers began treating their musicianship with the growing seriousness it increasingly required.