Beyond the Climate of Fear: Environmental Research in the Soviet Union during the 1960s

Although the United States competed with the Soviet Union politically, economically and technologically, our countries shared many of the same concerns regarding the environment. During the era when Rachel Carson was publishing Silent Spring in the West, in the East the Soviets were also looking into the dangers of organic compounds. They discussed climate change seriously, studied the effects of radioactive fallout from nuclear tests, and explored the mysteries of the northern lights.

In this month’s highlights from Joint Publications Research Service (JPRS) Reports, 1957-1995, we’ll take a break from politics to consider some of the more fundamental aspects of life.

We’re familiar with the organic compound DDT through its historical use as an insecticide and its toxic effects on wildlife. This report considers how the chemicals’ effects on insects differ from their effects on warm-blooded animals.

The Artificial Control of the Climate of Large and Small Areas

Understanding the biochemistry of an insecticide is important. On the macro end of the scale, it’s also important to know the impact of our actions on the global climate. No politics intrudes on the science in this report.

Translations from Radioactive Contamination of the Environment [1962]

We all share the climate, and we all have to eat. This book excerpt looks at the content of strontium-90 in the food supply. Since that isotope is a product of nuclear testing, this report does have an indirect bearing on politics, although the focus is on the practical aspects of food contamination.

Uptake of Radioisotopes by some Aquatic Insects

Further down the food chain, dragon flies, caddis flies, and mosquitoes—we eat creatures that eat them, and at least one of them eats us. How do they come to be radioactive, and how does it affect them?

One way insects become radioactive is when we intentionally make them so—in the interest of science. To study the effects of insecticides, the Soviets gave the insects themselves radiological tags. In the process they considered what was eating those insects, the effect of the radioactivity on those higher organisms, and also whether insects could be sterilized with radiation. Spoiler alert—they can!

We started out very small and we’re concluding on a much larger scale, in the ionosphere. This illustrated monograph traces the evolution of our understanding of aurorae. 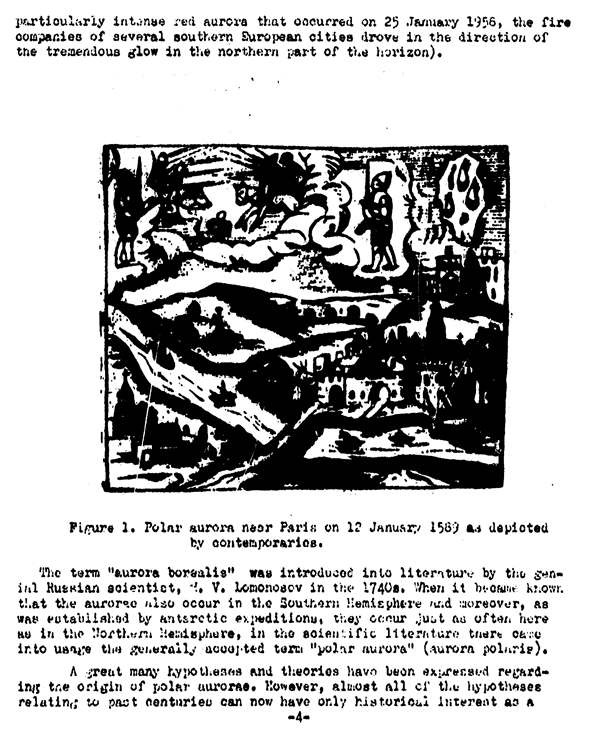