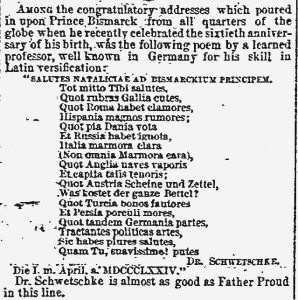 When one thinks of Prince Otto von Bismarck, 19th-century Germany’s Iron Chancellor, birthday cakes and greetings do not first come to mind. But they did — at least the birthday greetings — in perhaps an unexpected place and certainly in a most unusual way in a Chicago newspaper in 1874. On April 1, 1874, Bismarck — still not fully recovered from a serious illness contracted the year before (not nervous exhaustion from overwork in redesigning the European continent but rather a case of gout) — celebrated his 60th birthday in Berlin amid much adulation from the new Germany, his enthusiastic nationalist supporters, and foreign dignitaries. Just a little more than a month later, the Chicago Inter Ocean newspaper published on May 2, 1874 a macaronic poem [i.e. a poem, usually in Latin, interspersed with vernacular words or phrases] celebrating Bismarck’s birthday. It is, I think, a poem which raises at least a couple of questions.

To You I send as many greetings

As Gaul has country skins,

As Rome has shouts,

As Denmark has pious prayers

And Russia vulgar ones,

(Not all marble is dear).

As England has steam ships

Of such sustained course of movement,

As Austria has bank notes and bills

What costs the whole darn thing?,

As Turkey has good supporters,

As finally Germany has parts

So have many more greetings

Than You may most pleasantly count!

The closing comment in the Chicago newspaper article that “Dr. Schwetschke is almost as good as Father Proud in this line,” i.e., in writing clever verse, is surely a misprint by an Inter Ocean journalist or editor of  “Father Proud” for “Father Prout,” the pseudonym of the widely learned and at that time, even in America, very popular Irish humorist Francis Sylvester Mahony, now remembered mostly for his awful, ringing poem “The Bells of Shandon” and the verses in his Reliques of Fr. Prout. And so, here are some questions raised by these birthday good wishes. 1) Who was this Dr. Schwetschke, who is scarcely known today?  Dr. Karl Gustav Schwetschke (1804-1881) had attended the Classical Gymnasium in Halle and then continued his study of Latin and Greek at the universities of Heidelberg and Halle. He first worked in his family’s book and publishing house, edited the newspaper Der Hallische Courier from 1828-1843, was politically active in the 1840s-1870s, and published among other scholarly works the journal Allgemeine Monatsschrift für Literatur. A frequent author of occasional Latin verse, he brought out his Latin epic in honor of Otto von Bismarck, Bismarkias, in 1867, a work which remarkably went through five more editions in three years! Schwetsche was, as the Germans say, a “Bismarck-Schwärmer,” what we would call, strange as it might sound, a “Bismarck groupie.” 2) How did Schwetschke’s verses come to appear in a Midwestern American newspaper? These lines do not appear in any other contemporary newspaper digitized to date by Readex. Furthermore, they do not appear in the St. Louis Post Dispatch, the New York Times, the Times of London, or the Manchester Guardian or any other newspaper I have been able to search digitally. The original publication of Schwetschke’s verses probably occurred in the Halle newspaper Schwetschke had published, or perhaps in the Allgemeine Monatsschrift für Literatur or another journal. It is rather unlikely that the birthday message would have been by cable from Halle, or even Berlin, though not impossible. The Inter Ocean had been founded by Jacob Bunn, Abraham Lincoln’s banker and friend. More likely, the text was carried in its newspaper, or whatever published format, from Germany to Chicago by a new or returning traveler. After the German periodicals of the 1870s are digitized and rendered searchable, the answer at least to the question of the original source of “Salutes Nataliciae” should be easily ascertainable. 3) For whom was this Inter Ocean article in praise of Bismarck intended?  It is true that by the time of the 1870 census, the 9th census, Chicago had almost as many German immigrants as St. Louis [65,448 in Chicago versus 65,936 in St. Louis].

There were German-American organizations of every stripe (religious, cultural, athletic, etc.) and ethnic German language newspapers too; but how many of those German-Americans would have known of Schwetschke? Again, certainly, a few at least, but perhaps that question really is impossible to answer. The article’s comparison of Schwetschke to Fr. Proud [i.e., Fr. Prout] is probably meant for non-native German readership. How many would have been able to appreciate his Latin-macaronic lines?  Some but certainly not all. And finally, how many Chicago citizens in 1874, and this is really the point, would have looked upon Bismarck with admiration and respect — probably many. Among the enormous amount of Bismarck literature, and it is enormous, the Inter Ocean’s publication of Schwetschke’s Latin birthday verses is indeed an overlooked little curiosity and one which the Iron Chancellor would have appreciated. [Thanks are due to Prof. Judith P. Hallett of the University of Maryland for assistance with some of Schwetschke’s lines.]